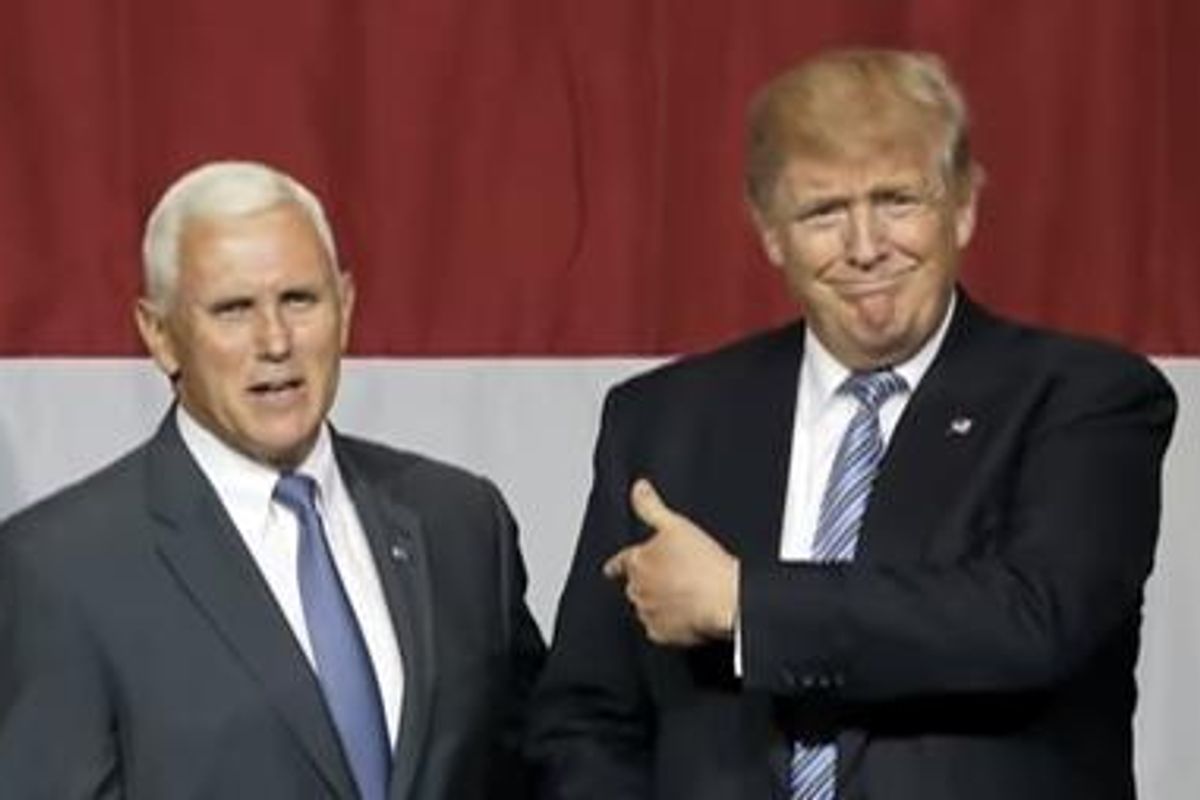 Update 7/15: Trump has officially named Pence as his VP.

The New York Times, among many other outlets, is reporting Camp Trump is "signaling" that their tyrant-in-the-making will likely select Indiana Governor Mike Pence to be his Vice Presidential candidate.

Trump, who has divided the Republican party with his horrifying ideologies, (apparently) feels confident in Pence's governing ability (since Donny has never held office), his experience on Capitol Hill, and his "calm demeanor."

He also sees Pence's extreme conservative views--enhanced by being an EVANGELICAL CHRISTIAN--could draw in a large percentage of Middle America, who feel Trump isn't jiggy enough with J. Christ.

In case you weren't clear, Pence is arguably more dangerous than Trump.

Let's break down why a Trump/Pence ticket would be detrimental to the safety of American citizens:

1.) Pence is a STAUNCH pro-life crusader. He has championed an anti-abortion agenda for his entire, decades-spanning political career. In March of this year, Pence signed a measure which prohibits women in Indiana from access to abortion "because of the race, gender, or disability of the fetus;" it disguises the true meaning--making it nearly impossible to get an abortion--behind a front of protecting fetuses from discrimination.

In 2011, Pence pushed for a House amendment to defund Planed Parenthood, which was blocked by a federal judge.

However, after he was elected Governor of Indiana in 2013, the state began cutting back--literally in HALF--funding for women's clinics and HIV testing clinics, resulting in a enormous HIV outbreak the state has been struggling with since. Scott County, Indiana, bore the brunt of the epidemic, with ZERO HIV/STI testing facilities available the public.

Trump has gone on record as saying women should be "punished" for having an abortion (which he--the demagogue he is--not surprisingly backtracked on), so the combination of these two could be unfathomably oppressive for a woman's right to choose.

2.) Pence is a lifelong opponent of the LGBT community: In 2003, working as a congressman for Indiana, he co-sponsored an amendment that would ban same-sex marriage in the state. In 2007, he voted AGAINST the Employee Non-Discrimination Act, which protects a person from being fired simply because of their sexual preference.

He voted against a repeal of "Don't Ask, Don't Tell," as well as bills aimed to improve/facilitate hate crimes based on sexual orientation.

In March of 2015, Pence signed an outrageous bill into law which protects business owners who refuse service to LGBT people based on their religion.

The bill caused mass outrage across the country, with both anger over its woefully bigoted sentiments, as well as the threat of Indiana losing business over boycotts of the state.

While Trump has never expressed an explicitly anti-LGBT agenda, but Pence's influence, as well as Trump's desire to bridge his gap with Evangelical conservatives, could very much induce one in the reminder of his campaign/theoretical presidency.

3.) Pence is anti-immigration: Like his counterpart, Pence is unabashedly xenophobic, and while in Congress, he co-sponsored a bill which sought to eliminate citizenship for children born in the US to undocumented parents, as well as a bill which prevented undocumented immigrants from getting medical treatment.

He also voted "Hell yeah" on a bill to build a fence around the Mexico border.

Would you look at that! Two peas in a fuckery pod!

Basically, a successful Trump/Pence ticket could be the start of a--and I mean NO exaggeration--right-wing regime that makes Dick Cheney look "chill."

If you're still fence-sitting (no pun intended!) because you're unsure about Hillary, or still salty about Bernie Sanders dropping out, get over it.

This election could have a huge impact on the direction our democracy takes; if you really want to make America great again, do not fucking vote for these two.