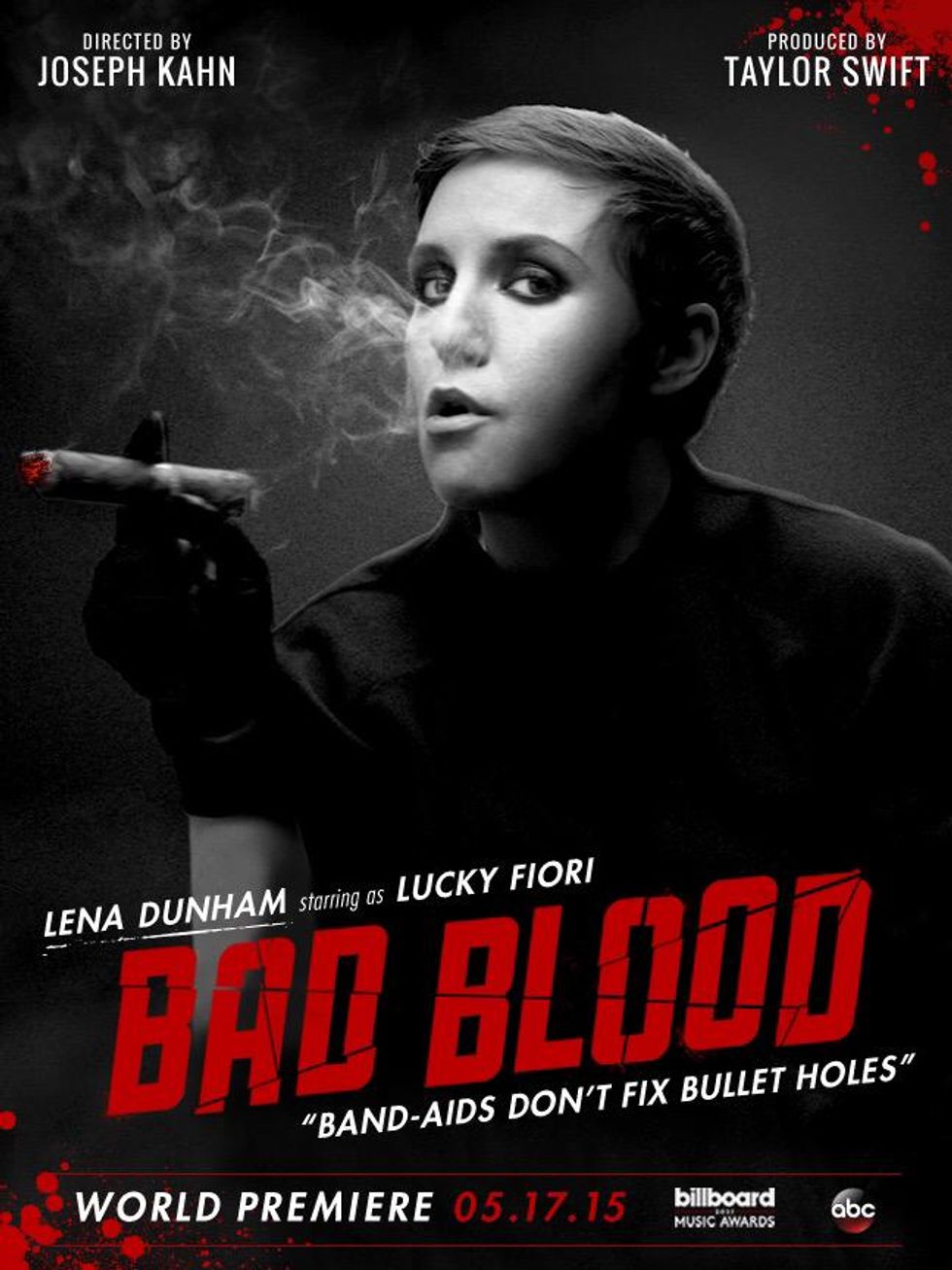 Everything We Know (So Far) About Taylor's Swift "Bad Blood" Video

by TenÃ© Young
PAPERMAG
Taylor Swift is gearing up to release the most-anticipated music video of 2015. Her next single "Bad Blood," from her chart-topping 1989 album, is a star-studded affair featuring a wide range of celebrities in television, music, and fashion including Lena Dunham, BFF Karlie Kloss, and Kendrick Lamar. To help you prepare for the premiere on Sunday, here's a guide to everything we know (so far!) about the clip.
The Theme is Sin City
2005's neo-noir film Sin City is the perfect theme to demonstrate the contrast between Swift's "All American Girl' persona and the song's darker subject matter about the singer's bitterness over a failed friendship. To add legitimacy, Sin City's own Jessica Alba will make a cameo as "Domino."
The Cast
Swift revealed on Twitter that each actor/actress choose their own character's name and persona. Here is the list of the entire cast involved:
Taylor Swift as Catastrophe
Karlie Kloss as Knockout
Jessica Alba as Domino
Zendaya as Cut-Throat
Cara Delevingne as Mother Chucker
Hayley Williams as The Crimson Curse
Lena Dunham as Lucky Fiori
Kendrick Lamar as Welvin Da Great
Ellie Goulding as Destructa X
Ellen Pompeo as Luna
Lily Aldridge as Frostbyte
Serayah as Dilema
Martha Hunt as HomeSlice
Mariska Hargitay as Justice
Hailee Steinfeld as The Trinty
Gigi Hadid as Slay-Z
There Will Be a Battle Between Catastrophe and Knockout
Real-life BFF's Swift and Karlie Kloss will battle it out in a showdown that some think is really based on the alleged beef between Swift and rumored enemy, Katy Perry (who's said to be subject of the song). Swift revealed to Rolling Stone that the song was about another female artist, saying, "She would come up to me at award shows and say something then walk away, and I would think, 'Are we friends, or did she just give me the harshest insult of my life?'" In the same article, she referenced a conflict from 2013 concerning the poaching of backup dancers from her world tour. "She basically tried to sabotage an entire arena tour. She tried to hire a bunch of people out from under me," says Swift, who didn't reveal any names in the article.
Watch the official teaser for "Bad Blood" above and watch the official premiere at the 2015 Billboard Music Awards on Sunday, May 17th live on ABC, starting at 8pm EST. It'll be a good pre-game before the Mad Men finale.