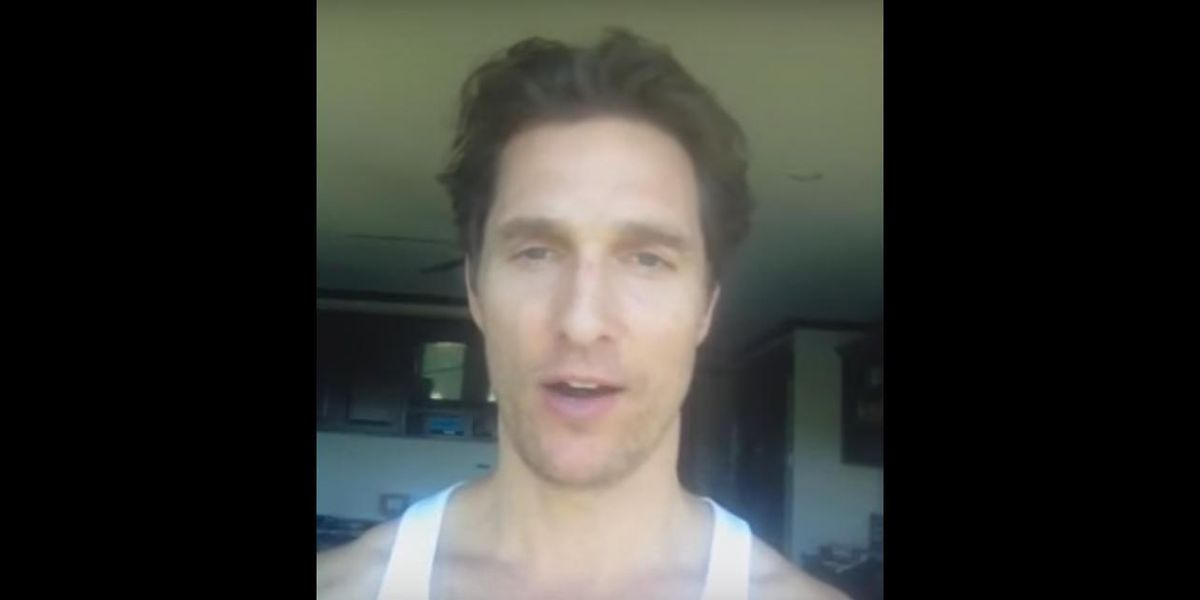 This week, Redditor S1icedBread shared a link to an utterly obscure Youtube channel with only 8k followers, six videos and only a couple hundred views belonging to none other than winner of Oscars, tapper of bongos, "trippy" thought-haver, flat circler of time, and creative director of Wild Turkey, Matthew McConaughey. In the days that followed this revelation, the account jumped up to 58k followers and climbing, and the comments have become /r/eally Harambe-centric. The content of the videos is nothing crazy – they center primarily on the promotion of his charities – but it's the overall presentation, and the general Southern dad-level grasp of technology that has really captured the Internet's attention. "How hard can this whole YouTube thang be?" you can imagine him muttering to himself from atop his exercise ball desk chair, giving a dimply smile and charming finger point to his vertically-oriented iPhone. The results are as follows...

He is promoting I Am Waters, a brand sold at Whole Foods stores in the southwest region. Proceeds are used to provide clean drinking water to homeless children.

He seems to be slipping in and out of a very subtle but unmistakeable Matthew McConaughey impression.

He hopes we had a great Thanksgiving. He did. He ate a lot. "A lot of food, that's for sure."

He is reminding us that there's still time to donate to his Giving Tuesday event, where $10 will give you a chance to sponsor a kid and potentially win a hang sesh with McConaughey and his wife.

He slips into a definite Matthew McConaughey impression at :44.

Have you ever been saluted by a man in a beanie before?

He is promoting I Am Waters again and seeking donations to provide clean drinking water to homeless kids.

Title: In honor of #GivingTuesday, w...

It's always Thanksgiving in this world.

He is seeking donations for his education charity, Just Keep Living. Donors will be entered for a chance to win two tickets to the Mack, Jack and McConaughey Singer-Songwriter Concert in Austin.

"You're gonna meet me, hang out backstage, have a beer or whathaveyou. It's a top time."

OMG he winked at me.

Description: Kubo and 2 Strings…great mythology… and a Samurai Beetle..

This is just a straight up trailer for Kubo.

Description: one more this year for the kid in all of us.

This is just a straight up trailer for Sing, an animated feature about a singing gorilla in which Matthew McConaughey gives voice to a koala named 'Buster Moon.'

The rest is silence.