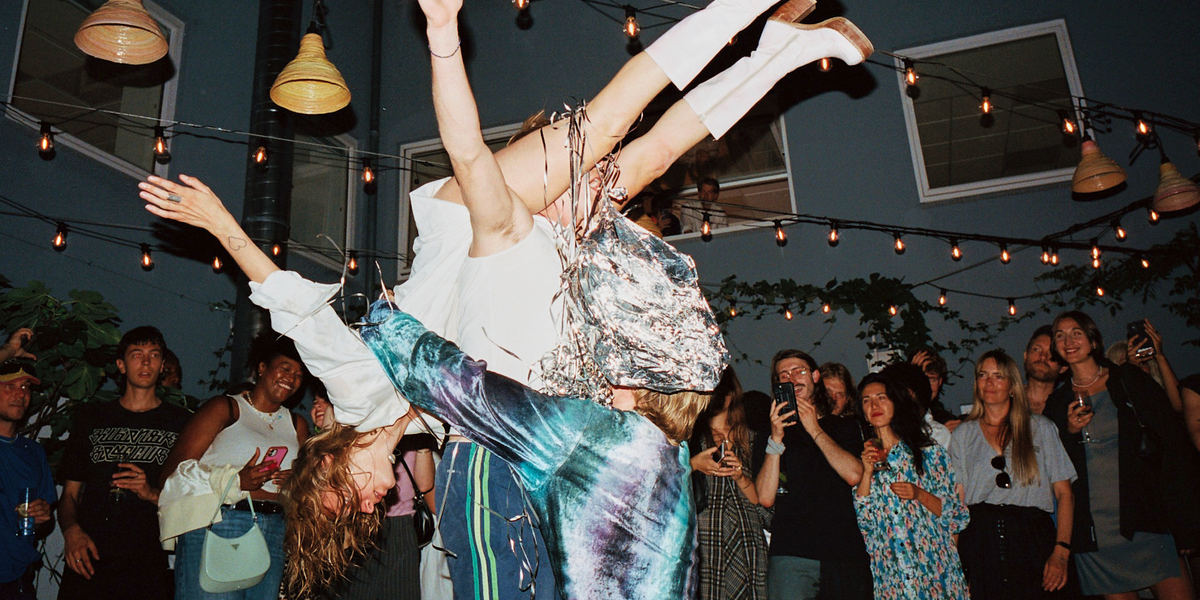 Meet the Visual Artist Who Headlined Ganni's Afterparty in Copenhagen

Fashion week is back in Copenhagen, any for many designers who call the city home, it was a return to in-person shows after several seasons due to pandemic-related restriction. Among them was hometown favorite Ganni, who staged a runway several hundred feet above in the sky to present its Spring 2022 collection.

The afterparty at Ganni House was equally as enthralling, culminating with a visceral performance piece by local artist Esben Weile Kjær. Ganni's founders Nicolaj and Ditte Reffstrup enlisted the young creative, who's currently a graduate student at the Royal Danish Academy of Fine Arts, to be a part of the festivities after seeing his work at an exhibit.

He showed a tableau from his exhibition "Hardcore Freedom" that was on last year at the Copenhagen Contemporary. (It will also open at Curated by in Vienna in a few weeks.) The original performance is over two hours long so he focused on the silver cloud tableau specifically.

"Ditte and Nicolaj from Ganni are friends of mine and they saw the show at the opening and we have been talking about it ever since," he tells PAPER. "The exhibition is somewhere in between a nightclub, fashion store, art institution and a stage so it kind of made sense to reanact something from that piece in relation to fashion week."

Kjær first studied music management at the music conservatory in Copenhagen, where he studied the history of pop music and socio-politics. But he slowly switched gears to the art space, where he describes it being much freer and more reflective than the music industry. He graduates from RDAFA in 2022 after six years, because that's how long it takes to become a visual artist in Denmark.

"I have lived here since I was 16," he says. "For me, Copenhagen is a coming of age. My work is floating together with my life. I'm working with my best friends and family, and we have dinners and rehearsals all together. It's kind of a cliche but I feel that art and life can actually be one here in some way because Copenhagen makes some basic living standards possible."