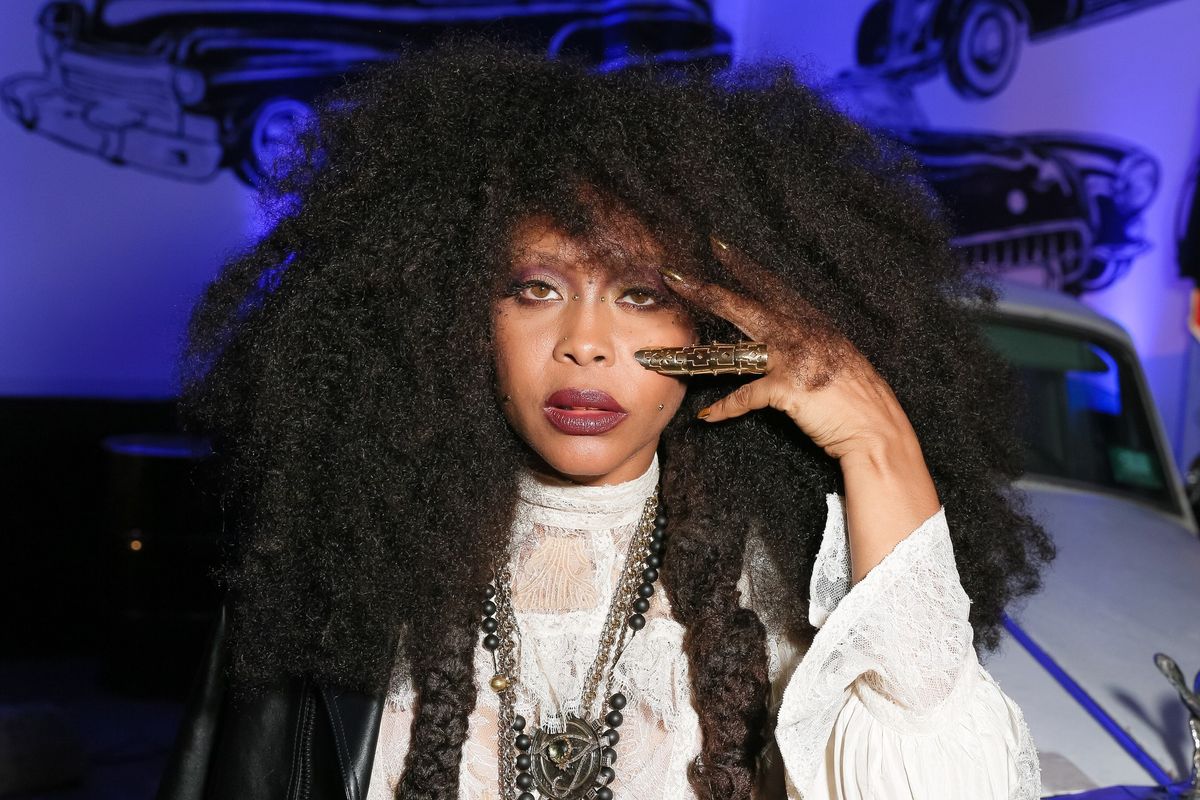 Erykah Badu On Never Fearing Hate, Intentional Artwork, and the Joy of Riding a Bike

The Bicycle Film Festival, created and curated by cyclist and filmmaker Brendt Barbur, with the help of Jonas Mekas, is a "culture-jamming" collaboration as an artistic form of activism and advocacy for bicycle safety. According to Barbur, the festival has reached over 75 cities around the world, like Buenos Aires, Moscow, Tokyo, Milan, and all over the U.S., including Los Angeles and New York. He says the festival is made for the "community of people who love the idea of what we're doing through the medium of art, music, and film of course." Although the festival is not about names, artists who have been involved with the long-time project include Spike Jonez, Blonde Redhead, Richard Prince, and to top it off, this year's lineup now includes Miss Erykah Badu.

Inspirational iconoclast Erykah Badu is known for topping charts and selling out shows with her neo-soul energy and soft raspy timbre. The "analog girl in a digital world" has never shied away from earnestly expressing her personal and political points of view. The epochal artist details about her upcoming collaboration with The Bicycle Film Festival and the power of taking risks in the art world. Badu spoke with PAPER about her continued venture into the performance art realm with her film Black Bikes Matter, which originally premiered in an art exhibition in Dallas. The short film will now be amongst many other powerful works of art in the upcoming 18th annual Bicycle Film Festival this weekend, in Brooklyn and Manhattan.

How did you get involved with the Bicycle Film Festival?

Brendt called me and told me that he saw my installation from an art installation in Dallas at a Gallery call LAB ART. The challenge was for 8-10 artist to take black bikes and do art on them, basically. They were displayed in a gallery and there was an opening and auction. All of the artists were super talented. The bikes that they painted were accompanied by additional pieces that we each did, and each artist had his or her own cause, subject or thoughts.

I think I was the only one who did a multimedia piece. I accompanied a video that I wrote and directed as a habitual for what I did with my bike. The name of my piece was Black Bikes Matter, which I thought was relevant because it was at the forefront of what was happening at that time. I started with very poignant pieces that would create some kind of dialogue. There's not a lot of explanation for the piece, it kind of speaks for itself and I don't like to describe what the art is about because it takes away from what it actually is. There's many layers to the piece--you can pull back one or you can pull back many. That's just what it is. [Brendt] saw the piece and asked if I wanted it to be in the Bicycle Film Festival which I hadn't heard of before but it seemed really environmentally friendly. Me, as an artist, I'm not attached to any particular group, I'm a human pretty much. I just thought it would be fun and creative to share that piece.

I don't know if you got to interact with any of the other artists, but there are a myriad of noteworthy names on this festival's lineup alongside yourself, but if so how has the experience been working amongst other creatives and politically driven artists?

This was kind of my first time hearing about the Bike festival and I'm in Dallas so we've constructed everything that I'm doing in Dallas. I'm sending my biked to New York today. I'm speaking with a curator who will hang it and make sure the media plays behind it and everything is adjusted. I'm mostly working on my own but I'm really interested in seeing all of the bike films and how many different bike films can even come out of this festival. It's such a creative idea. It's been 18 years going strong and it's a pretty ambitious project.

In your piece, the bike was explicitly the black male or female body, facing excessive persecution and destruction. But I'm curious to know if this pseudo symbol of 'the bike' has manifested itself in any other interpretations for you and if it's meant something to you in another way?

I ride, you know. I enjoy the euphoric experience and the atmosphere and getting out of my workspace or my other creative spaces--or even my parenting space--for a moment to be with the elements. I think it's an important thing to do, whether it's walking or biking. When I get a chance to do that there's an intimate relationship. Me and the elements become one living organism again and it feels good. With this particular project, I don't like to do a lot of explaining, but of course we are all beautiful, our bodies, and as we move through our different stages of consciousness we experience the consequences of our choices and judgments, as well as other's judgements and actions inflicted on us.

I know that you have children and bringing them up in a world that tends to fear the existence of black bodies is a tough truth to even grapple with. Is this piece aiming to change this conception? What would you want this piece to say to their generation?

I don't know actually. I just wanted to create some kind of dialogue in this film. It's always a risk with art, either you hate it or you love it. But what that hate or love or those emotions do is inspire movement of some sort. You don't have to like it or live by it--you can be inspired to create your own piece or your own movement or your own action. Art inspires that kind of thing inside of children and young adults. That's when we see evolution or change.

Was there any sort of cathartic maybe therapeutic feeling for you after creating this piece, especially as a woman of color?

Absolutely. I didn't know what it was going to be, I didn't really take it that seriously but as I was doing it I identified with being physically tortured or beaten because of my outer clothes, the clothes that house my spirit, because of what color it was. Because the bike is a certain color, it's not treated like other bikes. So there was that metaphor circling around in my head but as I was actually torturing this bike and doing damage to it, setting fire to it, dragging and doing all these things, I couldn't help but identify with that paint.

Growing up on albums like Baduizm, I thought of you first as a musician and I remember as I got older I found out more about your theater background and re-watched videos like Window Seat, which takes a very political stance with your own body. I don't want to put either a simplistic label or a box around you, but is the term 'performance artist' more befitting for you or do you identify more as just a musician?

I think, for the sake of definition, we can label things as they wish in order to categorize. Most of the time we kind of bend them. It doesn't matter what I'm called, I feel like all of the above. But this piece is a piece of performance art and 'Window Seat' was a piece of performance art. I could've went the long route to explain every single thing I've done but that takes the fun out of interpretation. As an artist, you can't be afraid of critique or even hatred.

Do you have any upcoming artistic endeavors in this same medium or is there more of an ebb and flow to your artistic process?

You know I'm creating something everyday. Sometimes small and only a few people see it and it's just meant to be for that small audience. Doesn't matter how big the spotlight or platform is--there is an opportunity to express who we are through our hands or our voice or our eyes. I don't really have plans for anything in particular but every time I get the opportunity I dabble in something that makes me happy. I keep thinking and moving, whether it's directing a video, or writing a concept, or painting a picture, or doing my child's hair in different braiding styles, or writing a song, or creating a dance, or helping my son with a project. That's what makes us artists, we are able to create.