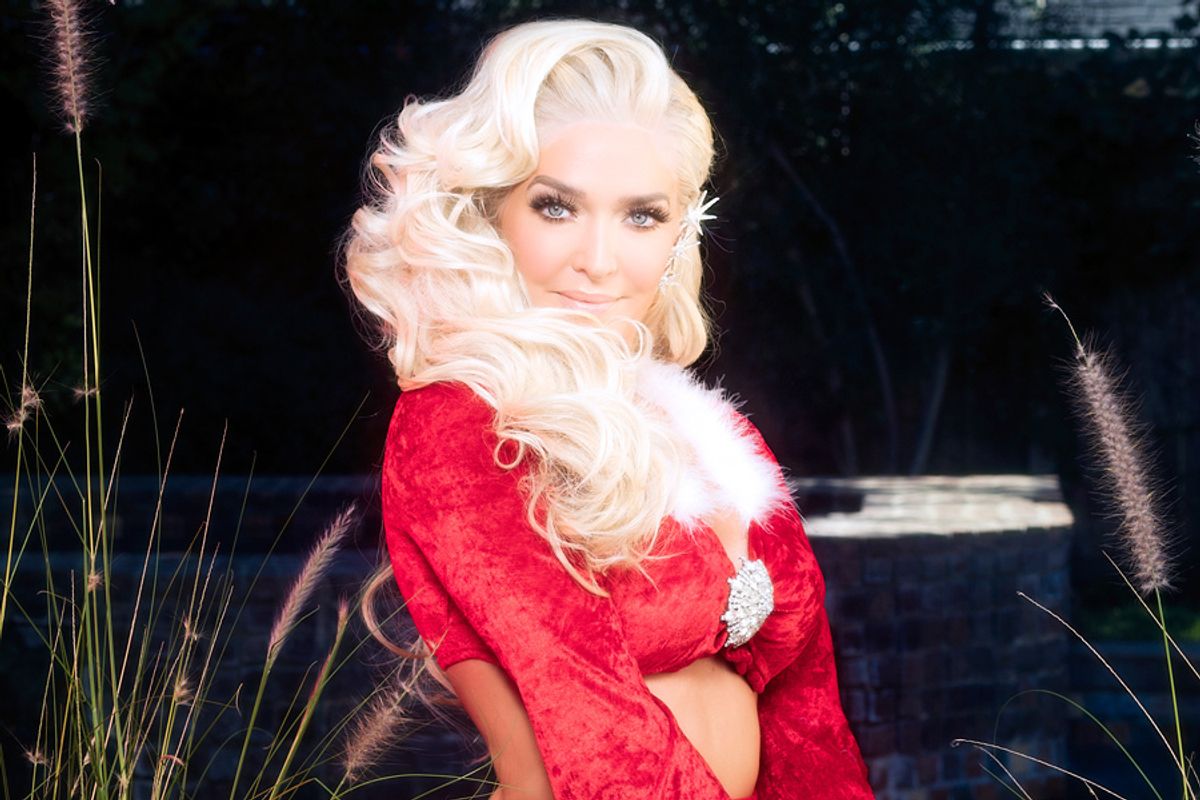 Known as the glamorous diva of The Real Housewives of Beverly Hills (and really, across all the Housewives franchises), there is no one more simultaneously fabulous and down to earth as Erika Girardi, otherwise known as pop star Erika Jayne. With a full-time glam squad on deck and a knack for keeping it real when others are fake, Girardi has quickly become a fan favorite after just two seasons on the long-running Bravo reality show. Born to an 18-year-old mother in Atlanta, Girardi is a self-made woman, LGBTQ icon and one of the funniest women on reality TV, so much so that Cecily Strong played a thinly veiled version of her on a recent episode of SNL. As of 2016, Girardi's held the number one spot on the Dance Club Songs chart nine different times, most recently with "How Many Fucks," and hints that the follow up to her debut studio album, 2009's Pretty Mess, is on the way. We spoke to her about her busy schedule, the newest season of Housewives and how sometimes, you just have to pull up your Big Girl Pants and carry on.

When did Erika Jayne come to life?

I created Erika Jayne almost ten years ago now. I had grown up in the performing arts and worked as a child and a young adult, and then I got married, had a child, divorced, relocated to Los Angeles, got remarried and really was living my current husband Tom's life, and it was time to create again.

So I discussed it with him, and I said, "I found this opportunity, and I'd like to start creating music and see where this really leads," and that's actually the birth of Erika Jayne. It was just making music and getting back in the studio and starting to dance again. I started to, not even really perform so much as just express myself and say things that I wanted to say. And to have an escape in glitz, glamour and fun.

What's the process for transforming into her?

The Erika Jayne character is over-the-top fantasy — it's more hair and bigger lashes and a bigger mouth and more sparkles. It's almost a life-sized, living Barbie doll slash superhero. And in order to pull that off, you have to get yourself to think you're a little bit of a superhero. It's certainly a character. It's not something that you want to live and be every day.

What are your plans for her?

I'm in the studio right now, and I'm writing a book, which will be out at the top of 2018. And then obviously I have the other job, Housewives — it'll be all at the same time!

That's a lot! What kinds of things will the book delve into?

It's me telling my story of who I am, where I came from and how I see things. Hopefully it's inspirational and you laugh and have a good time. It is basically the message behind Erika Jayne, which is something that I really want people to be able to understand. Which is that, you can quit, you can dim your star, you can stall in life, but you shouldn't. Being in your mid-40s, I still feel like my best days are ahead of me. Women my age are of value; we have something to say. And if I inspire one person to, I don't know, go back to school, or go to dance class or pick up a pen, that's all that really matters.

Have you gotten more used to having aspects of your life be open to the public over the course of filming three Housewives seasons?

It's not easy. I think that some things should remain private, and they always will. I don't think that anyone should be a complete and total open book. Let's just take my mother, for example. I did not want to go home, and I had a long conversation with the producers and I said, "Listen, this is a very sensitive part of my story, and I need to trust that you guys will help me out here." And they really did. They told the story as is, and I appreciate that.

Are they pretty respectful in general when it comes to your boundaries?

Well, sure. You can only share what you want to share. At the end of the day, you're a grown person, and you can say no. You can always quit the show. You either want to do it or you don't.

If you're living in the moment and you're passionate, and you say something, perhaps it's meant one way but it comes across another; well, you're going to live with that. And maybe only you knew what you meant, but well, fuck it. Too late now.

Have you always had that attitude, or is it something that's developed over the past couple of seasons?

Let me tell you something, I'm 46 years old. And I think by this time in my life, at some point you have to pull up your big girl pants and get out there if that's what you choose to do.

What advice would you give to a brand-new Housewife?

Shut up. [Laughing] Shut the fuck up about things you weren't there for. 'Cause you don't know anybody. I'm sorry, is that rude? Believe me, you're going to have to comment on stuff that happens in front of you, so just wait until that happens. 'Cause if you go out on a limb, you're going be the only one out there, honey. And no one's coming to save you, girl.