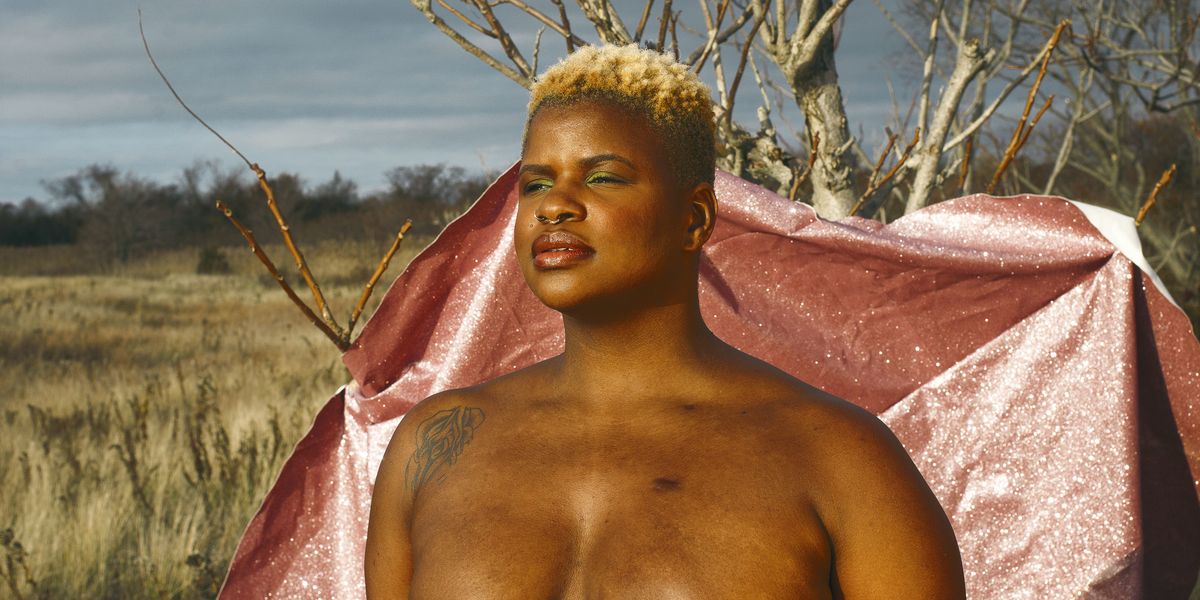 What was once the source of Ericka Hart's insecurity has become the spark for her activism.

In 2014, the queer sex educator and writer was diagnosed with bilateral breast cancer, which led to her double mastectomy and a pair of inevitable scars. She kept them hidden, even in locker rooms, before mustering the confidence to attend Afropunk 2016 completely topless — a brave move that empowered her to make Black femme cancer survivors more visible and valued in culture today.

"When Ericka walks into a room, she embodies power and confidence," says photographer Melody Melamed, who captured Hart surrounded by nature and sculptural clothing in a new photo series, premiering below on PAPER. "Her ability to turn her personal journey into a positive force for everyone — especially queer and trans people of color who're generally underrepresented in media — is inspiring."

We caught up with Hart to talk more about representation among cancer survivors, and today's body positive movement, which she says prioritizes white cis women.

Why do you think this type of representation is important?

Ericka Hart: Black people die at higher rates than white people from breast cancer. This is not because Black people carry a special gene that makes them more susceptible to deadly cancer strains. [It] has everything to do with Black people not [being] represented in advocacy campaigns, [and] access to affordable health care in this country is only getting harder for people with low socioeconomic statuses where Black people often sit. Even if you can afford the best doctors in the world, institutional racism is very real in the medical industry putting our bodies in compromising positions that doesn't support our survival. The advocacy campaigns that do exist are binary and heteronormative.

Even though my mother passed away from breast cancer when I was 13, what came to mind when I thought about breast cancer was a middle-aged white woman with three kids, a beautiful stainless steel kitchen with a mini van and summer home. I did not arrive at this schema on my own — this has been the picture of breast cancer for a very long time. Breast cancer impacts anyone with breast tissue, and it is very important that we stop focusing this on one gender or even two, as doing so is a disservice to many.

You sparked a bigger conversation when you showed up to Afropunk 2016 topless. Was this intimidating?

I've always been pretty comfortable naked, but something did shift for me when I had a double mastectomy. Taking my top off became a conscious act in making sure no one was looking in locker rooms. But my confidence to bare it all didn't magically come out of some self-love ethic, but rather through surviving racism over my lifetime. When I went topless at Afropunk, it had been a year since I had reconstructive surgery and two years since I began treatment. I was tired of my body being pricked and prodded by doctors and nurses.

Before my double mastectomy I wanted to see what scars would look like on my body. I had done google searches for "breast cancer" and "double mastectomy," but neither search had images of Black or Brown people. I asked my plastic surgeon for an image and two weeks later she had one. So going topless was a planned reaction to a world that had done its due diligence to exclude me in every possible way. I did want anyone else that looked like me to experience being left out or unseen. I didn't want people to believe that breast cancer only happens to white women. And when it happens, you are not solely a walking inspiration. I wanted people to see that this was just another body, deserving of pleasure and worship.

Your body is at the center of this conversation — how does this empower you and your activism?

I did a google search for "double mastectomy" today and there is a Black person that appears alongside Angelina Jolie's picture. After scrolling a bit, I noticed there was my picture surrounded by white people (this could literally be a metaphor for my life via Google search). When I looked in 2014 for images, these were none there, so this empowers me to keep going, to continue making an impact, to keep speaking louder even when I don't want to or when I'm scared.

You've said before that you're "not interested in a body positive movement without room for Blackness." How are you fighting to make the conversation more inclusive?

I don't think Black people were ever considered in the creation of the body positive movement. From where I am standing, it is mostly white cis women admiring their own bodies that are similar to Black folks', [and] getting accolades for something Black people — especially Black cis and trans women — have been publicly shamed, hyper-sexualized or de-sexualized for. I have yet to see one body positive activist give props to Saartjie Baartman, Serena Williams or Hattie McDaniel. I feel like I have been added to this movement non-consensually — another reminder that my body never belonged to me, but an aggressive way of claiming my body for a movement that literally had not even an inkling of thought to [include] folks who looked like me until I took my top off.

How do you hope these photos inspire viewers and ignite change?

The censorship of femme-identified nipples is foolish and rooted in patriarchy. So these images are important [because] people pay attention, whether it be to give yourself a breast exam, dismantle white supremacist patriarchal systems or you feel seen because this is also your body or you no longer need to feel ashamed to hide what you thought wasn't normal or acceptable. I hope viewers see these photos and think Black cis and trans femmes are the fucking shit and proceed to give credit where it is due.