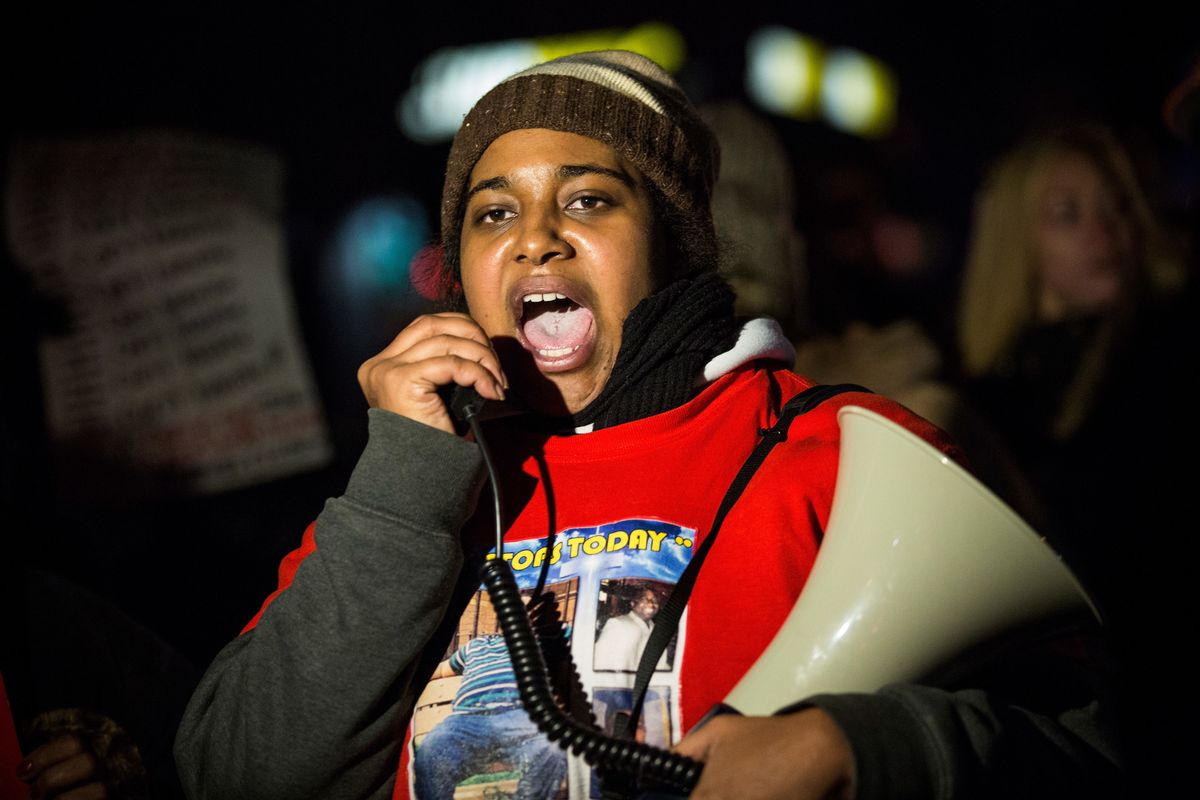 Erica Garner, who became a fierce activist after her father died at the hands of New York City police, died at age 27 following a heart attack. Her official Twitter account announced her death this morning.

She passed away this morning. The reports are real. We didn't deserve her.
— officialERICA GARNER (@es_snipes) December 30, 2017

Erica's father, Eric Garner, died in 2014 after a New York City police officer put him in an illegal chokehold. Garner, who had asthma, was seen on video saying "I can't breathe" 11 times before he died, leading to the phrase becoming part of the activist lexicon amidst the waves of protests and the growth of the Black Lives Matter movement that followed the event and too many others like it. The officer who put Garner in the chokehold has never been indicted on any charges related to Garner's death.

Erica became an activist herself in the wake of her father's death, advocating for civil rights by marching in protests, leading bi-weekly sit-ins in Staten Island where her father was killed, and speaking out on the issues plaguing the criminal justice system and the work of activists frequently and with depth and candor. She released a song in 2015 with relative Steven Flagg, "This Ends Today," as a tribute to her father.

Activists, politicians, celebrities and friends of Erica mourned her death today, and took the opportunity to touch on the well-documented impact systematic and daily racism have on the mental, physical and spiritual health of the people it impacts most:

Rest In Peace @es_snipes. Here is how I'll always remember her, a single mom at 24 leading her first ever protest with strength and courage and humor and love. From my documentary I will release online for free early next year. pic.twitter.com/LSDnaS5gdd
— Aaron Stewart-Ahn (@somebadideas) December 30, 2017

Erica Garner. A warrior in the long tradition of black women who see someone they loved ripped away from them and even in their mourning somehow love us enough to stand, to speak, to fight for something better. In your honor, in your name, we can never give up.
— wikipedia brown aka tawdry lordt aka eve ewing (@eveewing) December 30, 2017

My mother died in exactly the same way as Erica Garner. My thoughts are with her family and black women everywhere literally having their hearts broken from the exhaustion of just trying to live in this country.
— Saeed Jones (@theferocity) December 30, 2017

Erica Garner was an exceptional young woman. She was a loving daughter, sister, mother, friend. Jane and I send our deepest condolences to the entire Garner family and to all those she has impacted.
— Bernie Sanders (@BernieSanders) December 30, 2017

You will be missed by many!
Rest in Power @es_snipes #EricaGarner pic.twitter.com/MZjnQRa06D
— Colin Kaepernick (@Kaepernick7) December 30, 2017

Rest In Peace Erica Garner. Your sacrifice will not be in vain.
— vino the agitator (@VicMensa) December 30, 2017

One way to honor Erica Garner's life (may she rest in peace) is to demand a DOJ Civil Rights investigation into the wrongful death of her father, Eric Garner. We will continue to seek justice for the family. We will make Erica proud. #ICantBreathe #BlackLivesMatter
— Omar Vaid (@omarvaid) December 30, 2017

You wonder what elders thought of young MLK, Malcolm, Hampton, Clark, many other justice seekers of PURPOSE? They were proud! Erica Garner 27, snatched purpose and stood for justice with VOICE and ACTION and now legacy for her young children. Saddened today.
— Paul Mooney (@PaulEalyMooney) December 30, 2017

Today, the Garner family requested via a tweet on Erica's official page that only black journalists contact them for comment, which inevitably led to a warring of words online.

Out of respect to Erica please do not request comment if the journalist is not Black.
— officialERICA GARNER (@es_snipes) December 30, 2017

Take a deep dive into that tweet's replies, and, predictably, you will see a wide spectrum of people who are completely baffled by the request. But it's a request that calls out the well-documented reality that black people are often misrepresented by a mainstream media that is overwhelmingly populated by white reporters, editors, writers and producers.

Research by the University of Illinois done this year found that during the last election cycle, media outlets at best promoted racially biased portrayals and myths that, according to the commissioners of the study, "pathologize black families and idealize white families with respect to poverty and crime."

They added that "at worst, media outlets amplified those inaccurate depictions for political and financial gain. Such reporting reinforces debunked narratives, helping to justify actions from police brutality to economic policies that will hurt not just black families but all families for generations."

Even in a time of mourning, the Garner family took the opportunity to shine a light on what's broken in our system and offered a simple solution to begin to address it.

The late activist's official page also suggested that those looking to honor the activist's memory support the foster care system, a cause she was personally invested in as it was an institution she went through.

For now if you want to support Erica Garner ... Go find a way to support your local foster care system. The last action she told me she wanted to do was to support foster kids as she was one herself. The person with her when she died was her foster mother...
— officialERICA GARNER (@es_snipes) December 30, 2017

And others jumped in with some suggestions for how to do that:

You can stop whatever you're doing and look up how to do this. Easily. Look up "emergency foster care" too. https://t.co/h60LKue0r1
— Black Thought (@blackthought) December 30, 2017

As a former foster youth myself, I can 110% vouch for @NFYInstitute. We aim to build a movement through grassroots efforts, leadership development and civic engagement. For more info on our mission and our partners, please visit https://t.co/Azgwh1Xm0M. https://t.co/dxfpKuwYsM
— Jordan (@jordansdiamonds) December 30, 2017