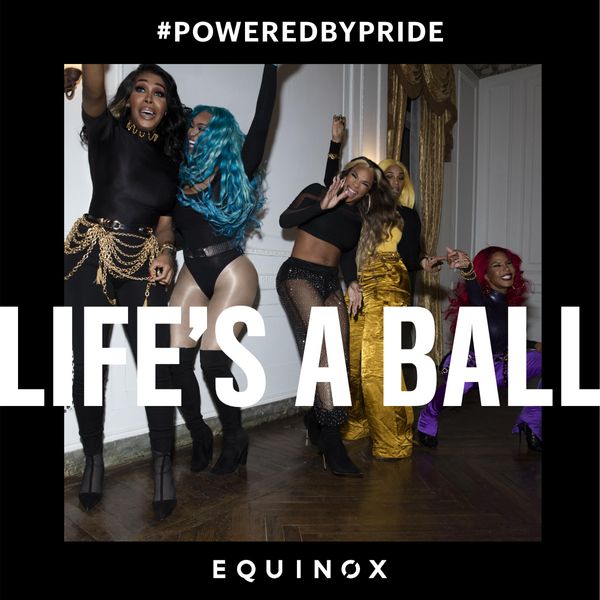 To commemorate this launch, Equinox recruited a handful of the New York ballroom scene's most iconic figures to lead a vibrant video and image campaign, using the tagline, "Life's a Ball." The video is definitely something of a family affair, showcasing individual elements of vogue performance, from catwalk to floor. Performing in solo shots and surrounded by family are a range "Legends" and "Icons." Legends featured are Veronica Miyake Mugler, Chyna Prodigy, Asia Balenciaga, Tamiyah Miyake Mugler; Icons are Sinia Alaia, Leiomy Maldonado, and "Up-and-Coming Legendary," Tati Finesse.

According to Equinox, "Life's a Ball" honors the "power and magnificence of trans women of color in their performance element and shares a message of equality, fostering sisterhood and expressing pride all through movement."

The video was directed by Sammy Rawal and choreographed by Tanisha Scott, who is well-known for her work with none other than Rihanna and Beyoncé. Yusef Mugler, Rihanna's hairstylist, was responsible for hair — an array of brightly-colored, loosely flowing manes. Icons Jack Mizrahi and Sinia Alaia produced the campaign respectively. Looks throughout the campaign were styled by Tess Herbert and an original track was created by DJ Byrell the Great.

As part of their first-ever brand partnership, this being done with House Lives Matter, Equinox will donate the proceeds from a voguing master class set to happen June 8 in New York. The ticketed event is open to the public. Additionally, for every social media post using the #PoweredbyPride hashtag or a GIPHY sticker from the campaign used in the month of June, Equinox plans to donate $1 to House Lives Matter, up to $20,000.

"To us, movement is a celebration of being alive, and with this work, we are celebrating life and bringing visibility to marginalized communities who are often overlooked," says Timothy Strudwick, Senior Creative Director of Equinox. "We focused on dance — and voguing specifically — because it's all about quick and precise movements, representing an authentic way to speak to Pride through our brand's unique DNA, which is rooted in embracing the joy of movement."

Icon and Executive Producer Mizrahi says "Voguing is a celebration of the magnificence of culture. It has also become a sisterhood within the LGBTQ+ community For us, vogue is not a science. It's a dance that is conditioning your body at the same time and now, more than ever before, fitness is a required part of the performance. Being a part of this campaign with Equinox was the perfect platform for us to showcase that sisterhood and the power of our culture."