text by Nathalie Olah / photographed by Louie Banks / styled and produced by David Motta
PAPERMAG
14 April 2014
Designer Pam Hogg and her fabulous free-thinking friends are looking to the future to redefine London's style scene. All hail the new generation. 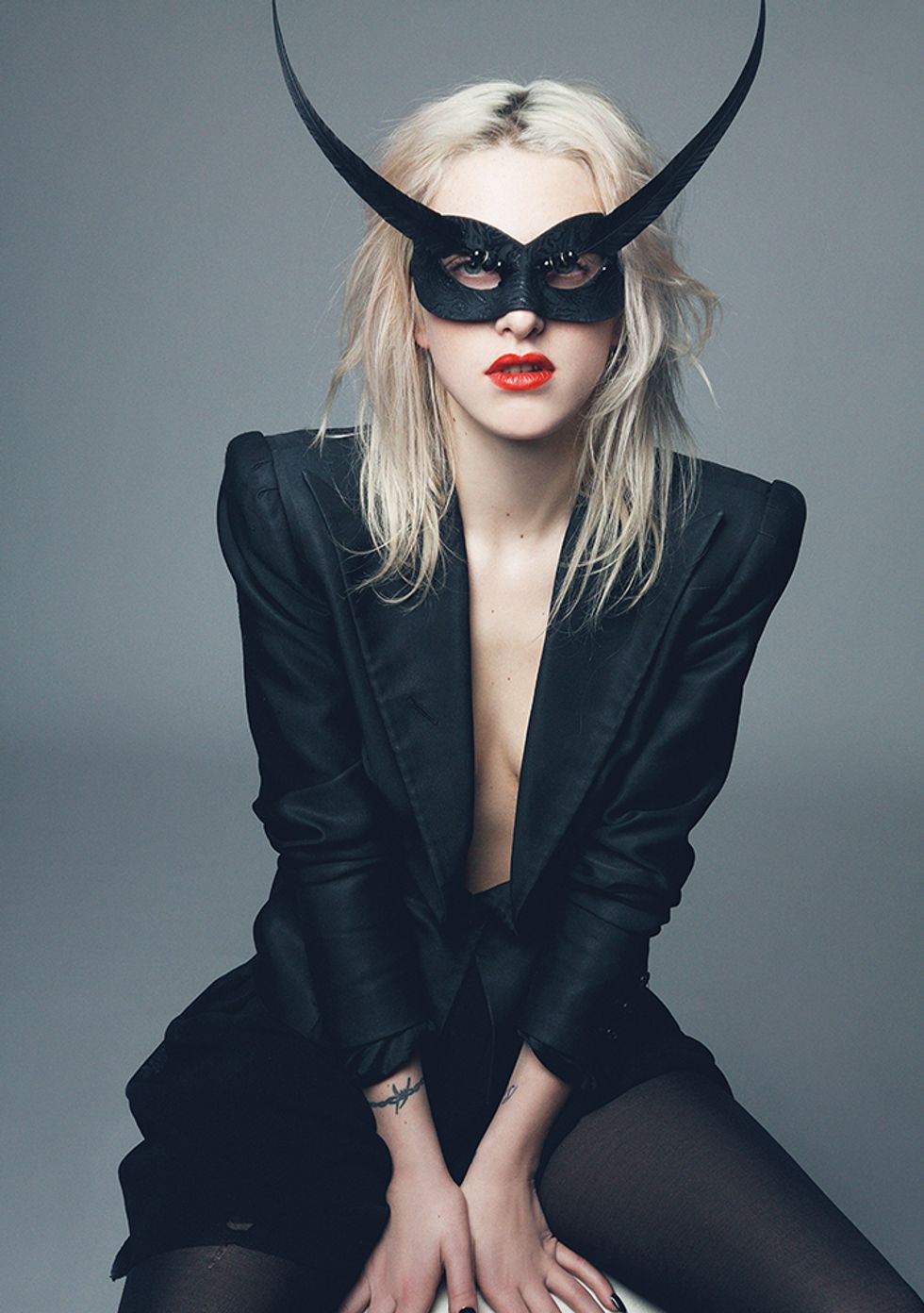 Harriet wears a mask by Philip Treacy, a jacket from the Alexander McQueen archives and tights by Wolford.
Harriet Verney, writer/stylist

Writer and stylist Harriet Verney is the country girl who stumbled into the fashion industry and stuck around because it was the only thing that satisfied her 'hyper-activity.' Niece of the late, great Isabella Blow, she writes for American Vogue, has done the odd bit of freelance styling and has just finished a refreshing, no-bullshit project interviewing Central Saint Martin's graduates for their student magazine.

"I wanted honesty. That's why I asked them how much money they all had in their bank accounts," she says of this most recent assignment. "Most said less than forty quid and told me they'd been eating tins of baked beans for the past four days. That's what recent graduates want to hear about -- the reality of the industry." 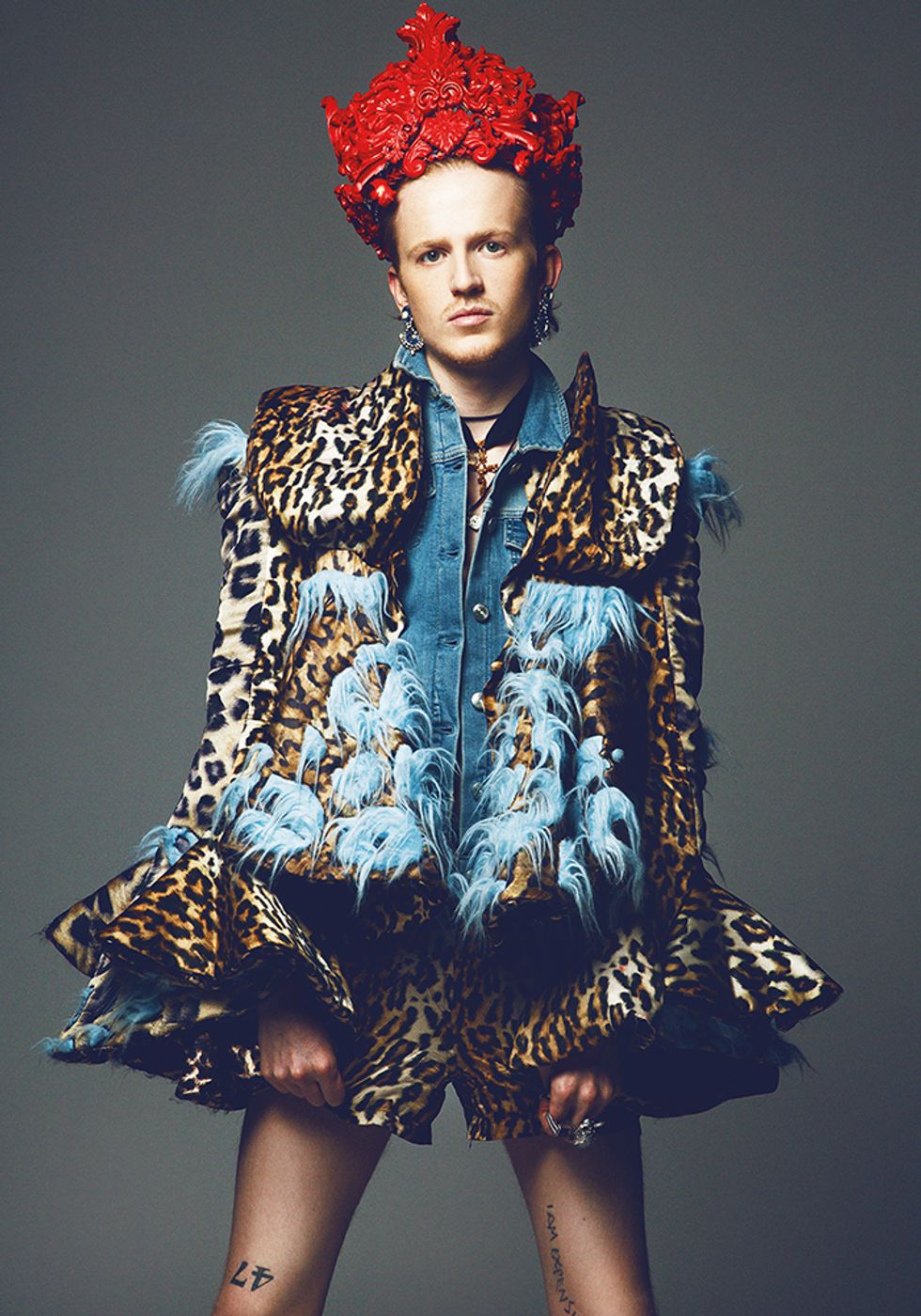 Ed wears a look by Ed Marler.
Ed Marler, designer
"I'm designing for someone who might not have much but believes they are a princess or prince."

Womenswear designer Marler shot to fashion world fame with his debut collection at last year's Central St. Martin's graduate show, in which he also starred. After casting a model who failed to show up on time, Marler flung on one of his otherworldly designs and took the runway himself. "Of course everyone thought I'd done it on purpose," he says.

Marler is ambitious as the people who wear his creations: "I'm designing for someone who might not have much but believes they are a princess, or prince."

He often dons his own looks, which he hopes to take to London fashion week in the Fall. "If I'd gone straight into designing for the AW14 collections it would have been an extension of what I had created before," explains. Distance is key, contemplation is crucial and thankfully for Marler, he's still got plenty of time to achieve it all. 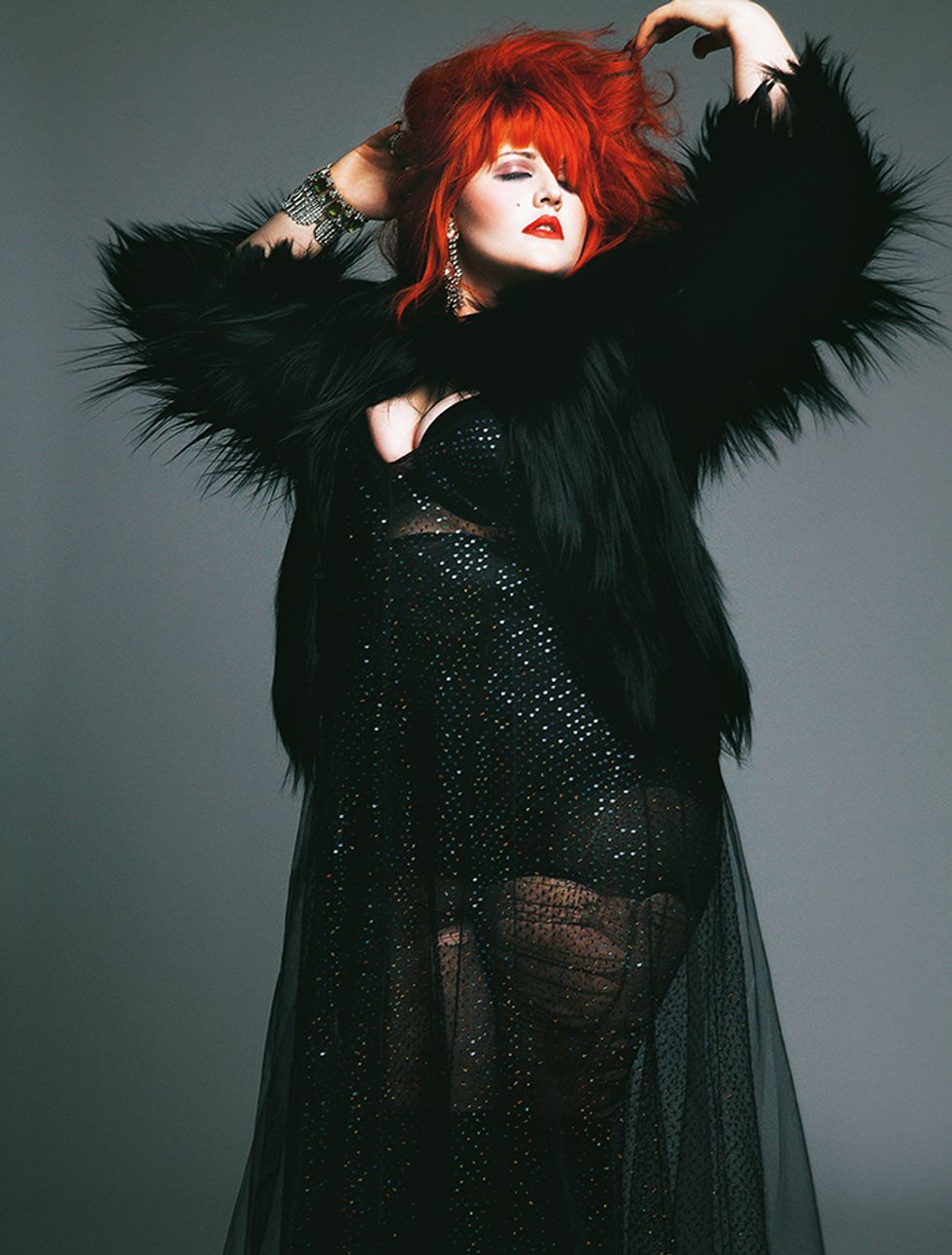 Angel wears a dress by Ashish and tights by Wolford.
Angel Rose, performance artist
"Maybe if people spent more time dressing up and making out they might not feel the urge to be so destructive on a Friday night."

Angel Rose, the milk-skinned, flame-headed performance artist has an allure that's both immediate and intoxicating. In her American drawl she tells me about her love of London: the history, the dark streets and, unbelievably, the weather. It's a far cry from her home in California, which she loves but will probably not return to until she's exhausted the London club scene. To her, the nightlife scene is a family, comprised of beautiful kids dancing under dimmed lights. And clubbing has the power to inspire. "Maybe if people spent more time dressing up and making out, they might not feel the urge to be so destructive on a Friday night," Rose says. 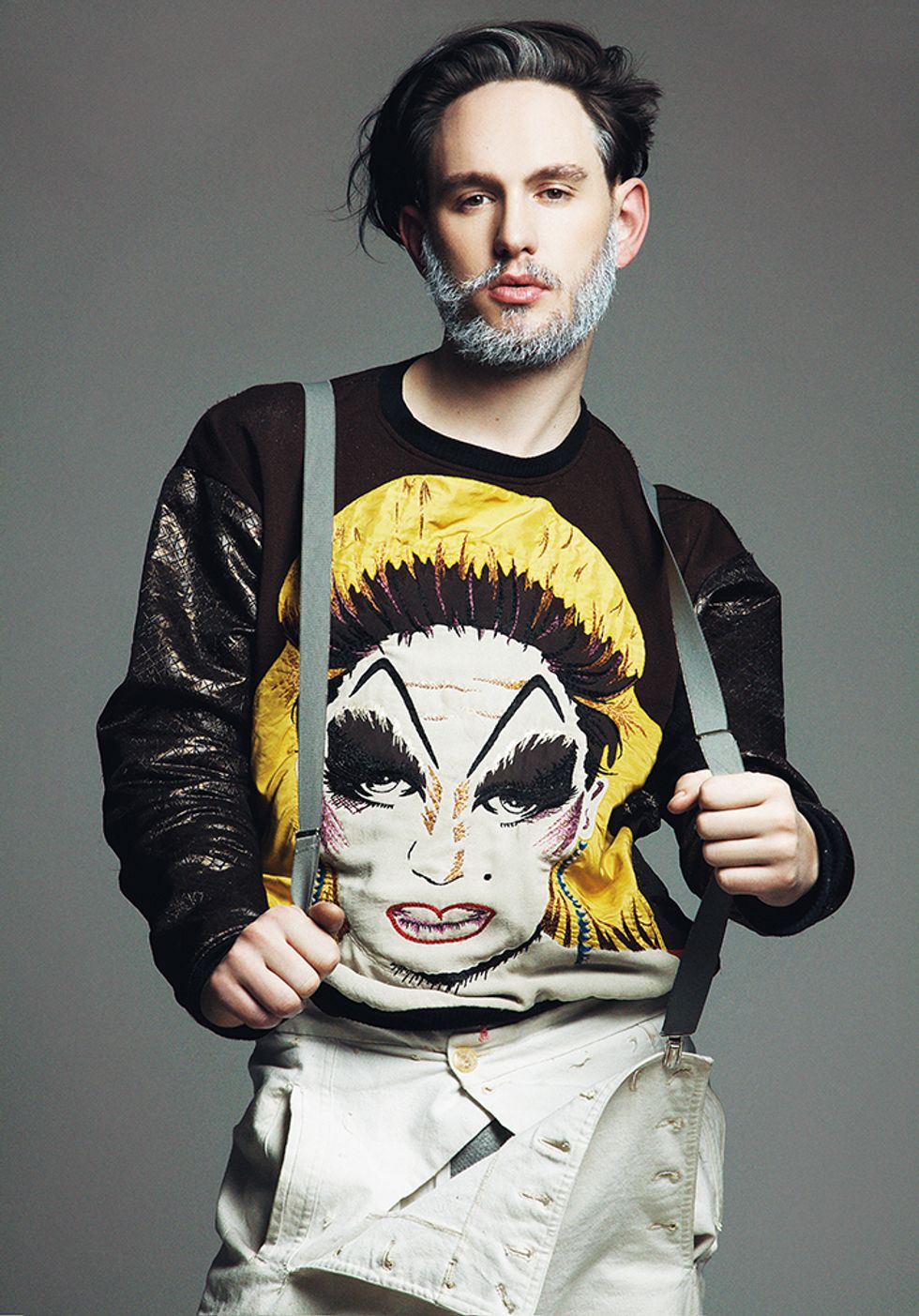 He soundtracked many a Londoner's mid-aughts adolescence and, at the mere age of thirty, is something of a living legend.

Having taken a hiatus, Wolf has started penning his seventh album.  "I wasn't really confident when I was younger. I had the bravado, I was cocky, but that's because I was insecure. Now I feel I've found real confidence. I remembered why I wanted to create music in the first place: that first basic instinct, where I wasn't even thinking about how somebody else would react to it," Wolf says. 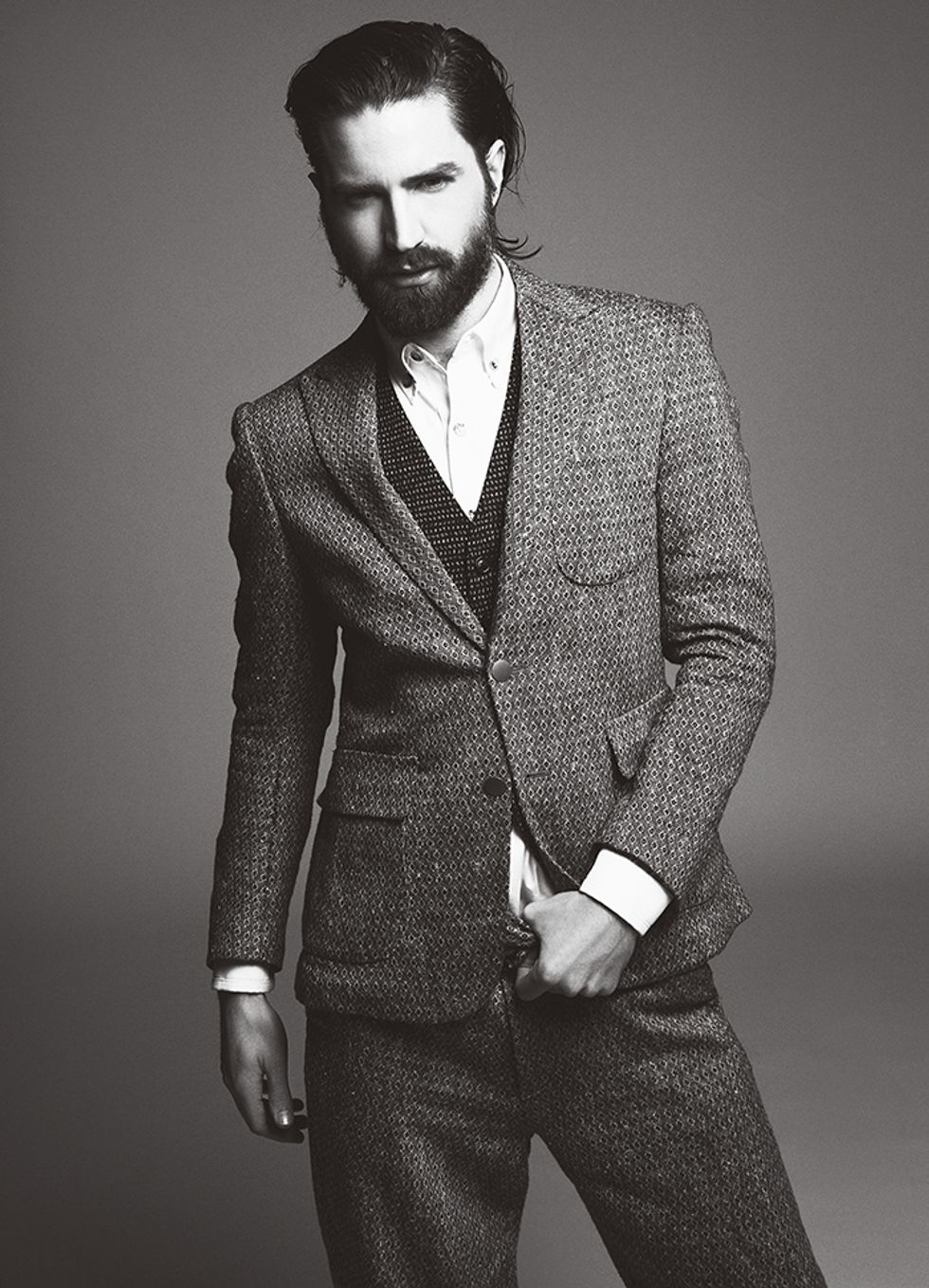 Jack wears a shirt by Meadham Kirchhoff and a suit and waistcoat by Casely-Hayford.
Jack Guinness, DJ/model/presenter
"British style is all about having a sense of humor. British people dress to make themselves and other people laugh."

Not many DJs/models/presenters can boast of a Cambridge literature degree and Shakespearean acting credentials. Then again, not many people of said professions embody all the sardonic humor and Fellini-esque magnetism of party king Jack Guinness.

After installing the eponymously titled 'Jack's Bar' into his Hackney home a few years ago, Guinness has been treating the city and its leading lights to a taste of his "Jester in Gentleman's garb" act. And they're loving it. "British style is all about having a sense of humour," he says. "British people dress to make themselves, and other people laugh."

He's similarly playful about his DJ sets. "I'm here to have a good time and I choose music that does that. I don't care about looking cool." Of course that's easily said, when you natually ooze cool the way Guinness does. 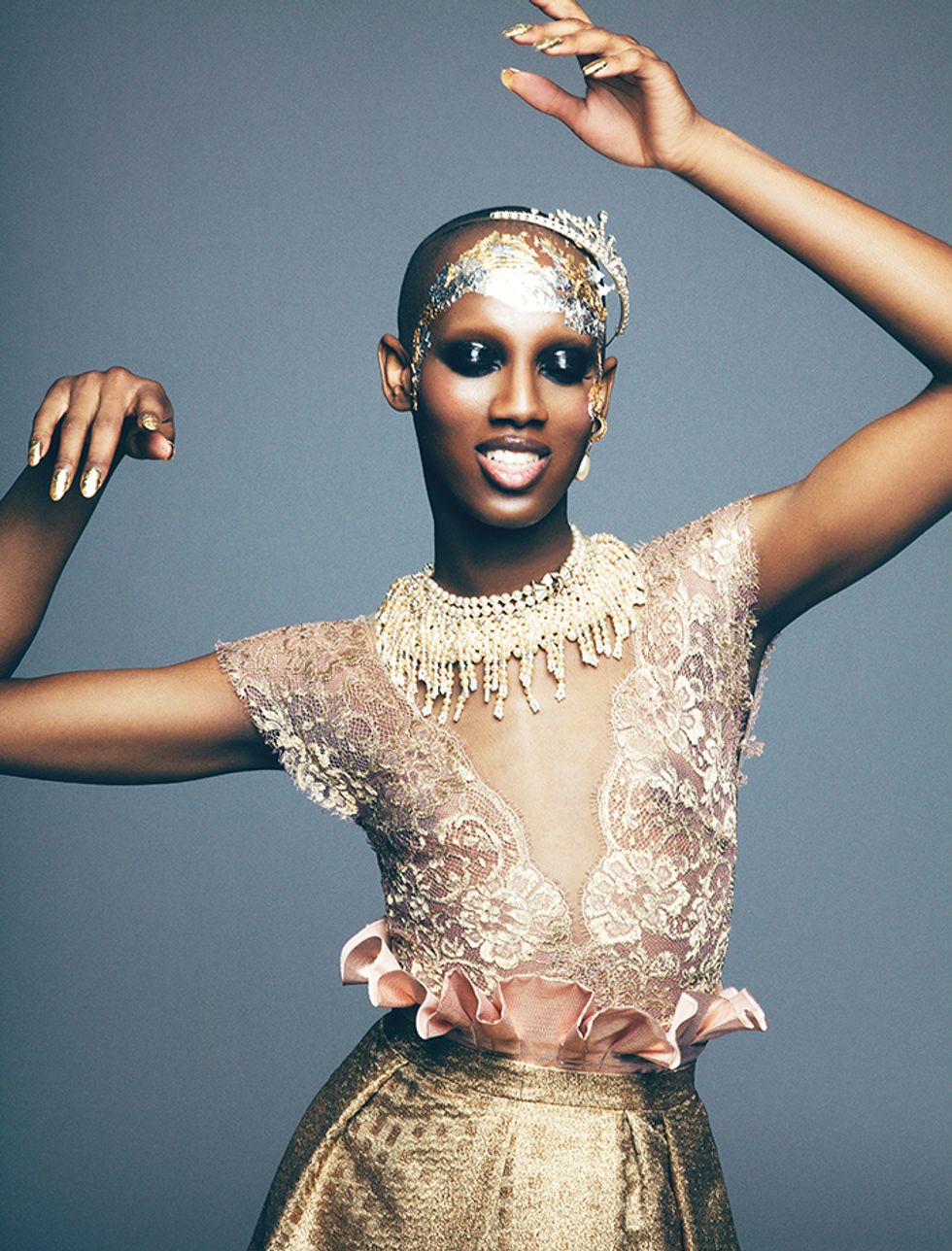 Whether DJing at Dalston club Vogue Fabrics or starring in shoots by Matthew Stone for Dazed, trans model Tschan Andrews has a fabulously full dance card as of late. When she needs to escape, she loves retreating back to her home in South London. "I used to live in East London, but we all need a break from the party," she explains.

Andrews, who was studying menswear design but left school after experiencing abuse by her classmates, says she wants to break down transnormative ideals in fashion. She says she plans to return to school next year. "I want to create a unisex line like J. W. Anderson, but I always felt menswear was the better place to start for learning tailoring," she says. 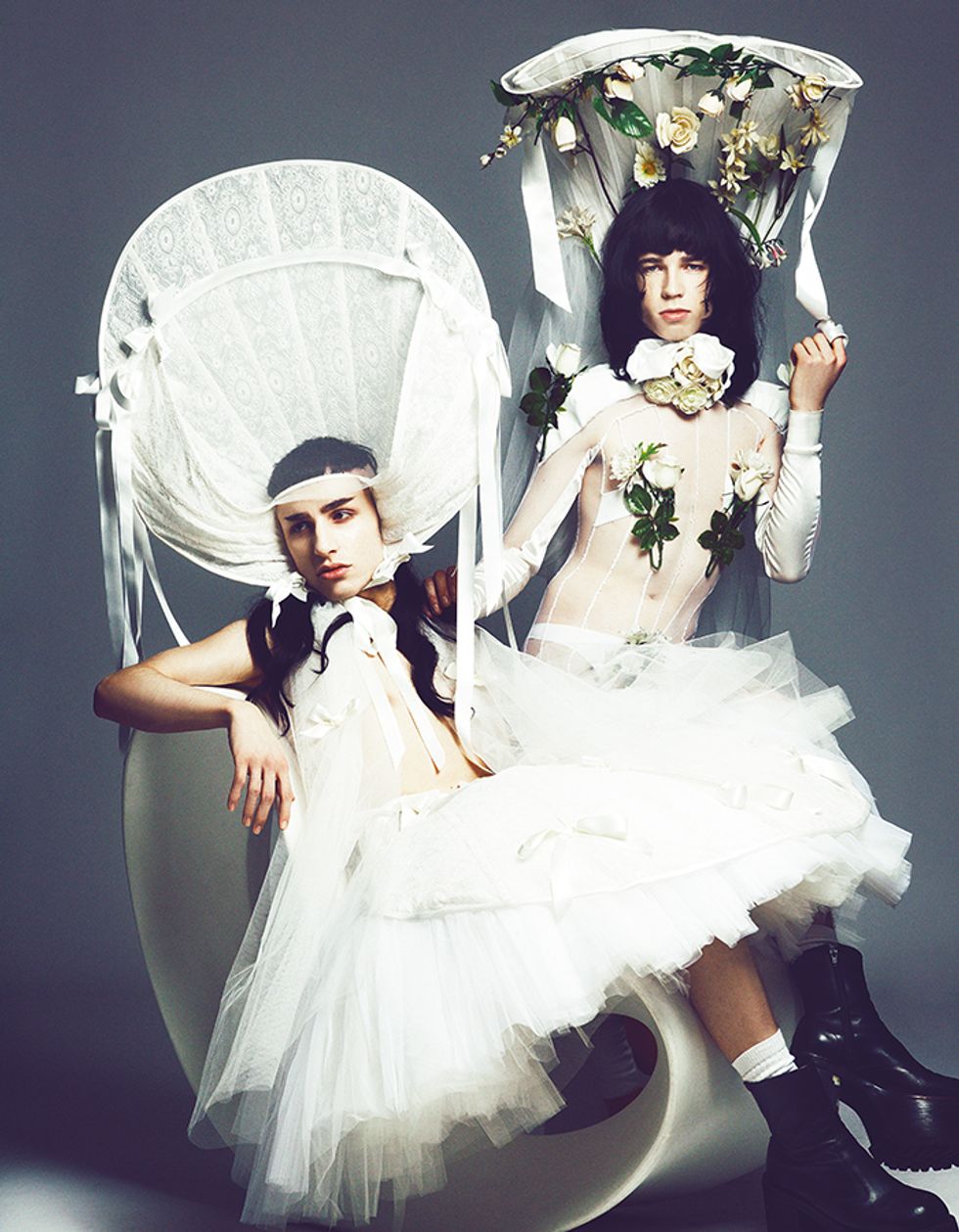 Andy Bradin arrived in London after a stint in Berlin and before that, a lifetime in Paris. His DJ partner and roommate, Joshua Quinton, hails from Southampton in the South of the UK. As the star of one of stylist and filmmaker Katie England's films, Quinton secured the pair a coveted slot DJing at Kate Moss' birthday party earlier this year. "At her house" Quinton adds, "to all her friends."

Booked to DJ early disco music most nights of the week, achieving that holy grail of DJ gigs has made them all the more ambitious. "We want to DJ in New York," Bradin tells me, "which we're hopefully going to do this year."

"We also want to tour Europe," Quinton chimes in.

"Things are changing in Paris and Berlin," Bradin explains. "But for a long time London was the only place that gave us opportunities." 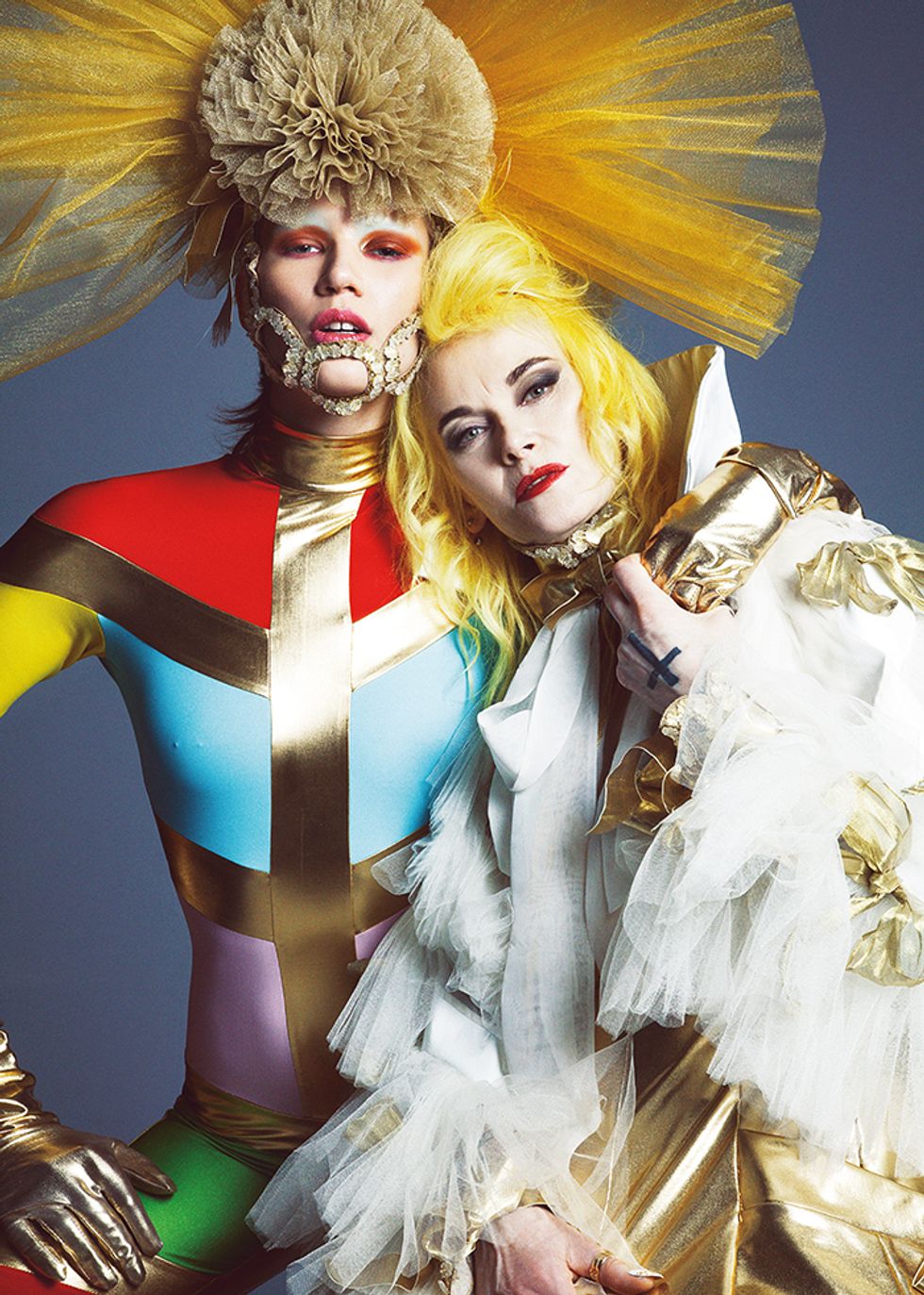 (l-r) Ani Alitalo at Profile Models and Pam wear looks by Pam Hogg.
Pam Hogg, designer
"Pussy Riot gave me the inspiration for my latest collection, which I called COURAGE. I designed pieces to reflect their cause."

Designer Pam Hogg is the Blitz kid who went on to dress Ian Astbury, Siouxsie Sioux and Debbie Harry. Her catsuits are iconic and while the topic of her work may have changed from decade to decade, the spirit is always the same -- one of rebellion and protest.

I had previously admired Pussy Riot for taking risks to get their message across but even more so for their attitude when they exited jail, still defiant if not more so. This gave me the inspiration for my collection, which I called COURAGE and I designed pieces to reflect their cause. It was a celebration of gay culture and the richness it's brought to society. I designed my first Tomcat suits and had two beautiful boys walk hand in hand. The collection was not intended for sale, none of the pieces with a direct reference to Pussy Riot were made for commercial purpose.

The show was a barnstormer and the fashion industry, otherwise busy contemplating the gradual shift from color panels to print and back again, was floored. That's Hogg's style. She's tackling the big issues with an unapologetic approach.

"Love is, for me, all-encompassing joy, where you're able to embrace all without judgement or discrimination. I would like it to mean humility, tolerance, understanding, accepting of differences and allowing those differences to enrich our lives rather than to cut them out like a sore. I'd like it to bring freedom in every respect." 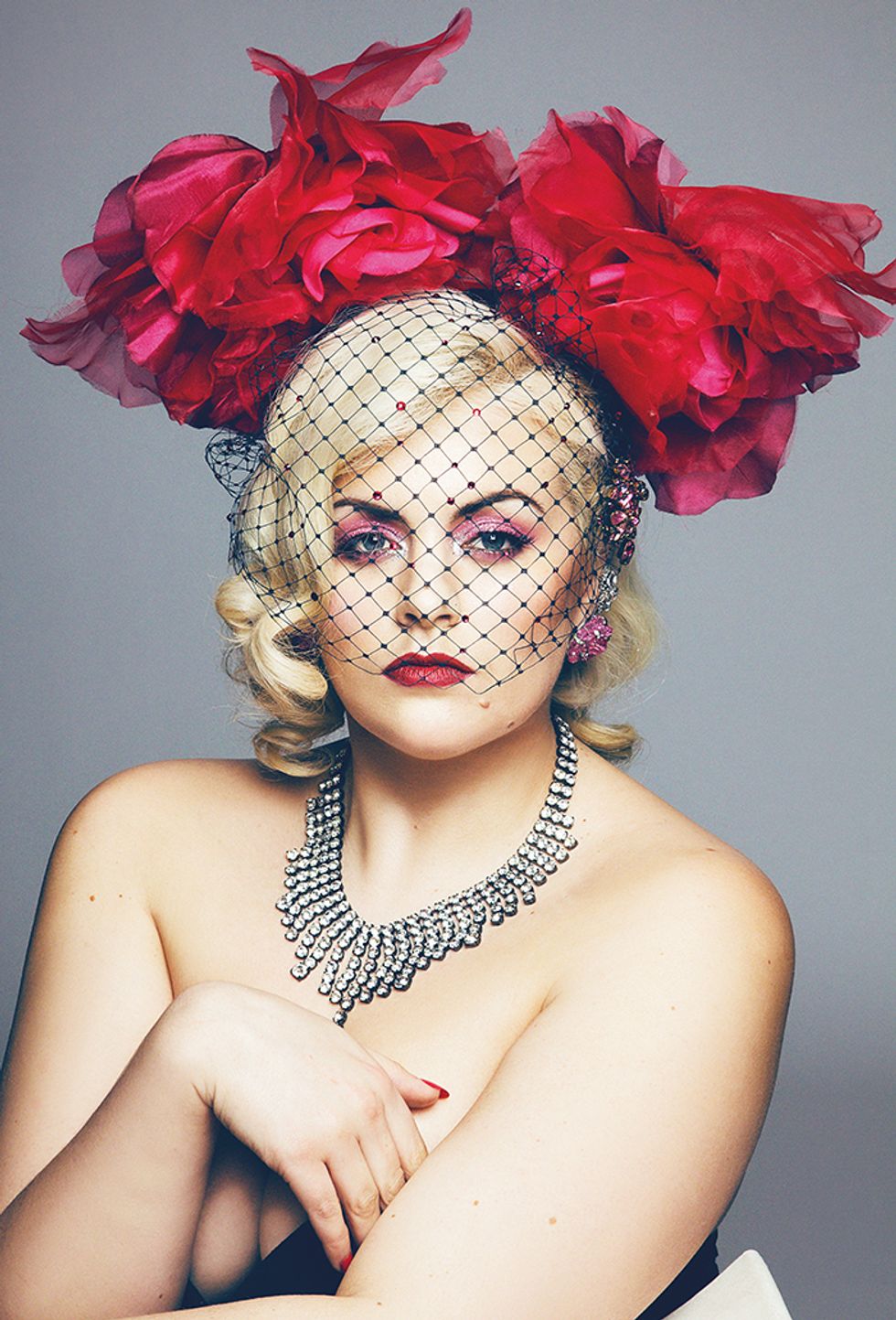 It's obvious why Felicity Hayward was cast in the role of Anna Nicole Smith for her first modelling job two years ago: the arched brows, the mischievous smile and, sure, the massive breasts. Even the dulcet tones of her Essex voice are weirdly reminiscent of the late Hollywood starlet's own seductive notes. Yet perhaps what lends itself most to the role is Hayward's totally unapologetic way of holding herself. Scouted while dancing at the George and Dragon pub in Shoreditch, her journey into modelling was unplanned.

"I'm really lucky," Hayward admits, her gratitude palpable in the warmth with which she treats everyone on set. Just don't call her a plus-size model. "The phase is meaningless anyway, because it refers to anything from a size ten to a size twenty."

The reduction of the female form into just 'plus' or 'straight' sizes is something Hayward wants to see come to an end. It's what gets her out of bed on those days when standing in front of the camera might feel like the most unappealing thing in the world. That, and the prospect of one day securing a long-coveted Guess campaign.

"It was the label Anna Nicole shot for," she says. "They've always promoted femininity without having to make a point of shooting 'plus-size' girls." 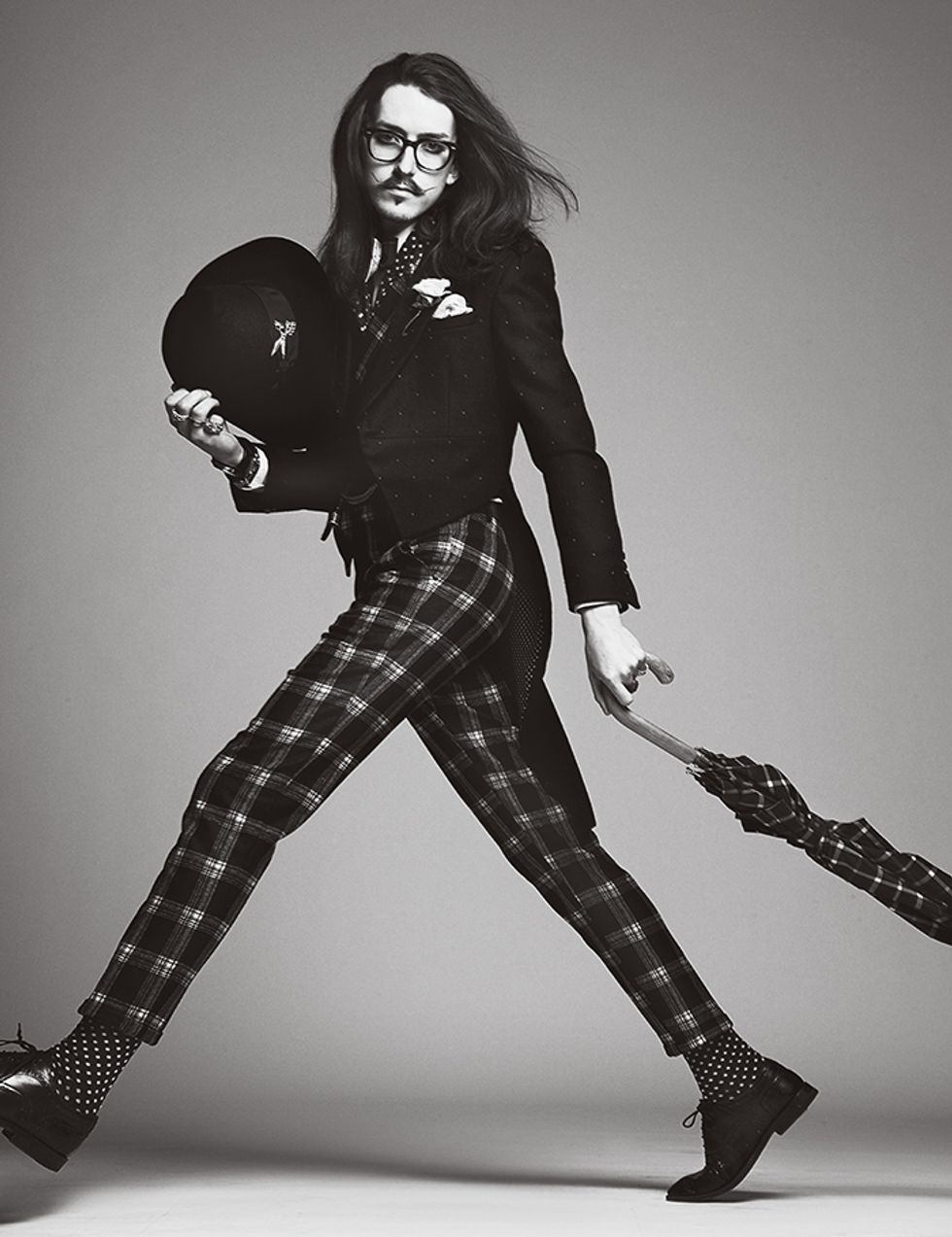 Joshua wears a look by Joshua Kane Bespoke.
Joshua Kane, designer
"I like to create bespoke designs for characters."

The word 'dandy' gets thrown around a lot these days, but in the case of Joshua Kane at least it's appropriate. The moustache, ponytail and Victoriana tattoos all play second fiddle to the clothes that he designs out of his Islington-based studio. Where other designers are happy to ride the wave of fleeting trends, Kane wants little to do them. "I don't pay attention to the fashion seasons," he admits. "It's about evolving products that reference one another. I also like to create bespoke designs for characters."

Kane works closely with those who commission his tailoring to create pieces that are as collaborative as they are unique. It is this close attention to the people who wear his clothes that keeps his designs fresh and. It's also allowing him to grow. Starting out designing exclusively menswear, Kane has since moved into womenswear and we couldn't be happier.

All jewelry by Gillian Horsup at Grays Antiques Market