This Emo Party Thrives on More Than Nostalgia

Amongst long-running party series, few have had the sort of far-reaching cultural impact that LA's Emo Nite has experienced as the preeminent purveyors of the aughts emo revival. After all, you'd be hard-pressed to find many other Tuesday night bar parties-turned-prolific, nationwide event series, but with international tours, satellite events in 35 American cities, a cult-like following, and spots on big-name festival bills, they've consistently proven that "anything can happen at Emo Nite" — whether we're talking about the reunion of Skrillex's band From First to Last, surprise performances from stars like Demi Lovato and Lil Xan, or a chance to belt along to pop-punk classics next to Cole Sprouse or Tana Mongeau.

So, true to fashion, Emo Nite's star-studded fifth anniversary party this past weekend took the literal cake. Featuring appearances from a mixture of seminal Warped Tour-era artists and younger, emo-indebted acts, everyone from 3OH!3 to Hawthorne Heights to Phoebe Bridgers to Machine Gun Kelly and Travis Barker sent off #20ninescene with a bang, alongside a large number of Emo Niters who've been coming to the party since its very first iteration.

That said, while Emo Nite technically falls under the categorization of a "much-hyped LA party," what's unique about it is that while surprise guests are the norm, marquee names and celeb sightings could really matter less to the crowd. So then, what exactly has kept hundreds upon hundreds of people coming back year after year? Well, according to most long-time attendees, it's the "family gathering" atmosphere that's been championed by founders Morgan Freed, Babs Szabo, and T.J. Petracca from the very beginning. 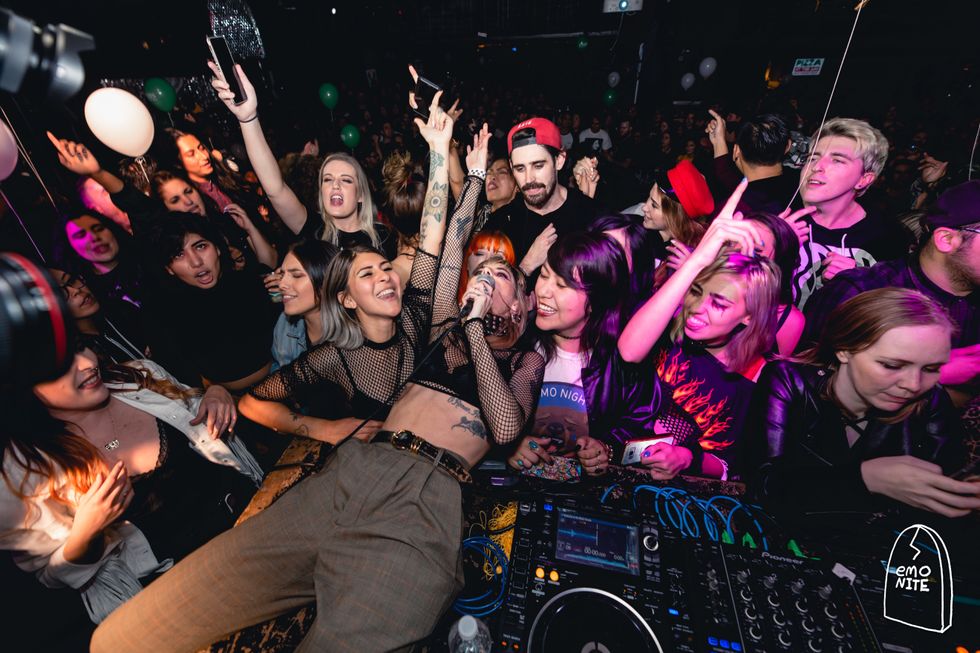 After all, as attendee Rocky Rinaldi — who's become an Emo Nite celebrity of sorts thanks to his eye-catching Welcome to the Black Parade costume — explains, what Emo Nite's die-hard following really keep coming back for is the egalitarian, all-encompassing party experience.

"It's not just people separated from a crowd on a stage pretending to be rock stars," Rinaldi says. "There's a personal connection that's made and you realize that Emo Nite is not a show, it's a community and you're a part of it. It's like going to a giant house party and hanging out with your friends."

Frankly, "house party" is an apt description, especially considering that we're talking about an event that's notorious for letting attendees climb on-stage to dance with talent. More importantly though, the usage of the term also alludes to a rare sort of intimacy unique to Emo Nite — a camaraderie cultivated amongst the hundreds of people who come to LA's Echoplex every month to belt along to all the songs they've "re-discovered [together] as adults," as attendee Ashlee Doty puts it.

"You can't hold onto the past but, in this case, the past is what brought us all together," she says. "I don't think any of us ever stopped 'being emo.' I think we just found each other in the midst of the most vital years of our lives and our passions synced us together."

But make no mistake. While nostalgia is definitely a core component of Emo Nite's appeal, as Rinaldi alludes, its true cultural impact lies within the way its touched the members of its incredibly tight-knit community. 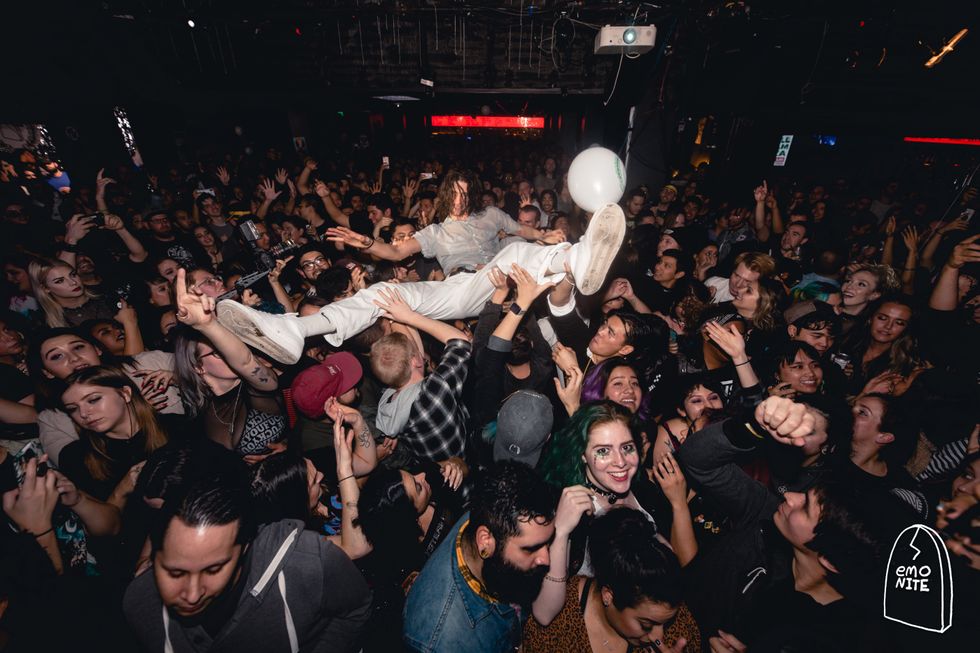 "Emo Nite has become apart of my identity in a way," Rinaldi explains, adding that it "isn't some fad or something I just casually love."

He continues, "It's deeper than that. It's become more than just about music. The friendships I've made through these events, I know I'll keep for a lifetime. And for being in your thirties, there's something to say about that."

Which makes sense, as the space it's provided — especially for those who resonated with music made for outsiders, misfits, and sad kids — has extended far beyond the confines of the Echoplex in the past five years. And in a world where everything seems to be going to shit and people are feeling more isolated and disconnected than ever, it's not hard to see why people are drawn to it.

As such, Freed says that Emo Nite's biggest achievement doesn't involve all the special guests or critical accolades it's accrued over the past half-a-decade, it lies in the "catharsis" of community it provides.

"There's a sense of relief in loving and feeling loved. People want to be together for all this crazy shit," he explains. "Emo Nite gives them the things they can't get in their regular lives, just because of the times we live in."

And this catharsis is something Rinaldi says he knows firsthand, as he credits Emo Nite with playing "such an important part in helping my mental health and [providing me with] an endless support system of genuine people." Recalling a point in his life where he had felt completely "abandoned" after moving to LA for a failed relationship, Rinaldi talks about the moment Petracca pulled him on-stage during The Used's "I Caught Fire" — an experience that instantaneously made him feel like he belonged. 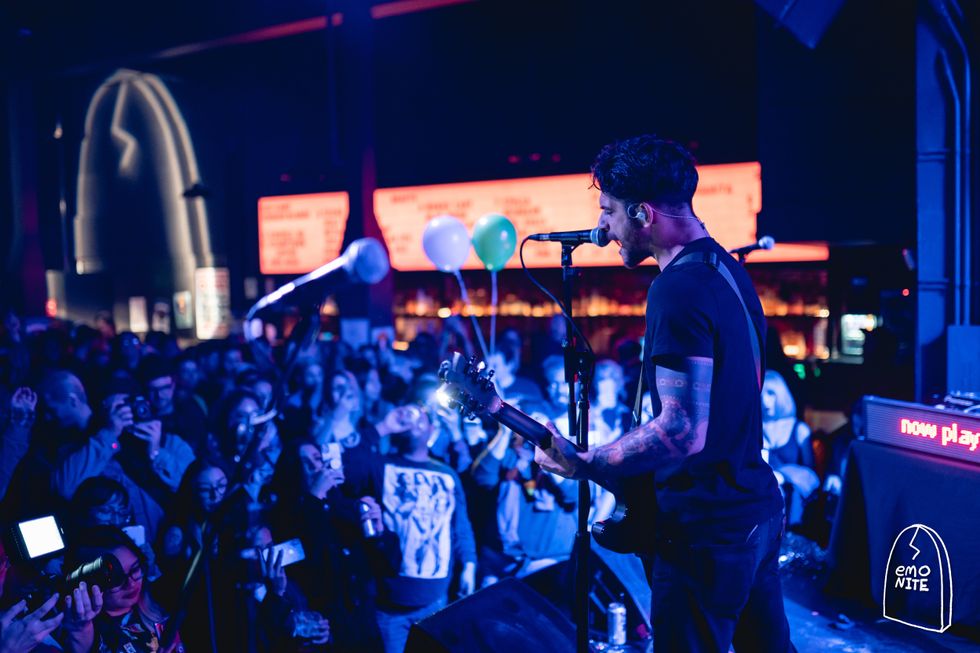 "I didn't even know him yet... [but it was this] powerful moment where I was filled with emotion. You grab someone's hand and the feeling is understood and mutual," he says. "I couldn't express how grateful I was and how badly I had wanted this since the beginning."

That said, if there's anything Rinaldi's realized since, it's that he wasn't alone in this experience — something that's led him to continue reaching out to other Emo Niters in similar situations, who pay it forward in turn. In fact, this ethos has become such a ubiquitous aspect of the Emo Nite experience that it's frequently compared to a support group of sorts — a judgment-free safe haven where everyone is loved.

After all, as Freed explains, the beauty of this community lies in its openness and the willingness of Emo Niters everywhere to come together to help each other in their individual struggles — and, at the end of the day, that's the only thing he could really ask for after five years of hard work.

"There have been a ton of people who have come to Emo Nite and were like, 'Hey I was gonna kill myself tonight, but I came here instead,'" Freed says. "They didn't feel like they fit in and just needed somewhere to go." He pauses for a beat. "And, ultimately, that's the most important thing, you know?"