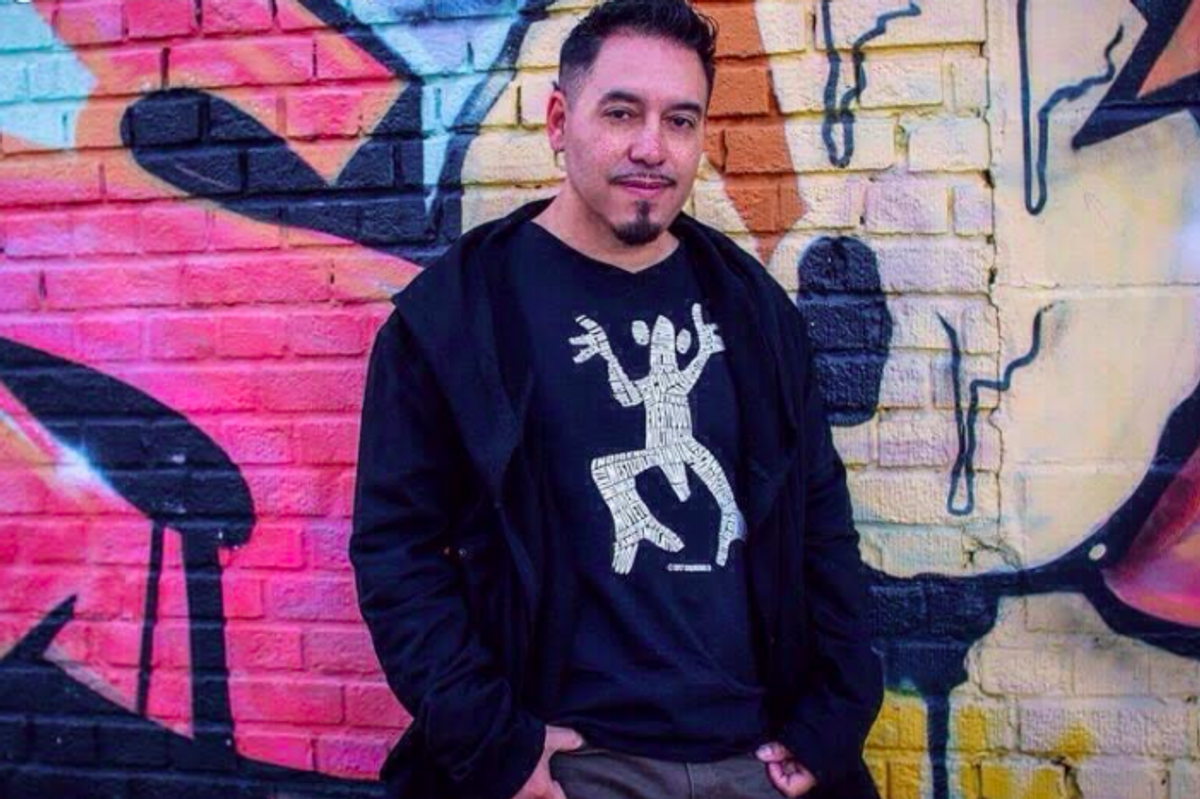 Emanuel Xavier on His Vivid Experiences as a Gay Street Poet

Hailing from Bushwick, Brooklyn, Emanuel Xavier is a longtime gay poet who writes from his own incredibly extraordinary experiences and who founded the House of Xavier to celebrate a culture of inclusion. He took a break from spoken word in order to have a conversation with me.

Hello, Emanuel. How did you get into the poetry scene?

I went to Nuyorican Poets Café and saw several spoken word artists that blew me away and I realized that's what I wanted to do for the rest of my life. Having come from the streets as a former prostitute and drug dealer, I didn't think that I would ever be taken seriously as a spoken word artist. I had no formal education, no academic background. I thought I needed all of that in order to succeed in that scene.

How did you make it?

I had a story to tell and there were some openly gay poets, but not as many as now. Spoken word poetry was very, very hip-hop with an influence from rap. I had no qualms of stepping up and being open about my sexuality and my experiences. It was a fresh new voice, I suppose. They welcomed me with open arms.

Eventually, I ended up on Russell Simmons Presents Def Poetry at a time when he wasn't accused of being a sexual predator. At the time, that was great. It was fantastic to be acknowledged by someone who was clearly very involved in the hip-hop world.

And you created a House.

The House of Xavier lasted from 1998-2008 and you were a big part of that! It was fun trying to fuse the ballroom scene with the spoken word poetry community, but it took its toll after a while. Ball kids understandably wanted to battle at the balls and vogue and work the runway. Poets wanted to perform and compete in front of an audience without props and shit.

Then I survived a hate crime in 2005 and underwent brain surgery in 2006. A few months later, my friend Willi Ninja died. He was the reason I started the House and without him, it just wasn't the same after that. However, we have some great successful contemporary queer poets these days and everybody seems to be doing death drops, so it wasn't all in vain.

You started out in the house scene?

I was very involved in the house scene when I was 16 because my parents threw me out.

Because you were gay?

Absolutely. We have a great relationship now. It took a long time to get to that point. It's still not a perfect relationship.

What was the turning point?

I was lucky because my mom had a gay cousin who caught me hanging on the street in front of the Monster and took me in to live with him in Riverdale. I wasn't ready to reach out to her, but eventually my mother's aunt convinced me to reach out to her and we went from there.

How many books have you done?

I've published five poetry collections and edited two or three anthologies. The latest collection, entitled Radiance, came out a year ago. A lot of it had to deal with the fact that I had radiation from an acoustic neuroma, which is a brain tumor.

I had an incident in 2005 where I was surrounded by a group of teens and beaten up for being gay. I noticed I had lost hearing in my right ear. I went for MRIs and tests and realized I had developed an acoustic neuroma, a brain tumor that develops in your ear canal. It was benign, but if I didn't have it removed, it would grow and I would drop dead. I had surgery to have it removed in 2006. Two years ago, the tumor returned, for which I had to have radiation. Hence the title of that collection, Radiance.

Just had my MRI results yesterday and I have a clean bill of health and the tumor is not growing anymore, there's very little chance to come back.

Congratulations. Can you actually make a living in poetry?

No. I work for Penguin Random House. I get my occasional college gigs and royalties, but I'm very happy to be working in publishing. I'm doing what I love. I've been there for seven years. I'm in Special Markets. We sell into Urban Outfitters and Williams-Sonoma—any place that isn't a traditional book vendor.

One of my biggest accomplishments here has been launching the Penguin Random House LGBTQ Network (for employees). That's the name of our group. We sponsor the Lambda Literary Awards, we march in the Gay Pride parade, and we're part of the Rainbow Fair.

What's your advice to young LGBT poets trying to get noticed?

There's so much more opportunity now due to social media. There are so many more publications to get your work to a larger audience. Definitely read a lot of poetry books. Check out the spoken word venues like Nuyorican Poets Café and Bowery Poetry Club.

Bowery Poetry Club is still at it?

They don't have as many poetry events, but they still do events. And definitely try to get your work published in journals and magazines.

Related | Andrea Gibson: 'Here's to Showing Up for Each Other'

Your poetry style is very personal.

Very personal, very political. For the longest time, spoken word poetry was looked down upon because a lot of our work was considered street, much like the street artists like Haring or Basquiat. But poetry is not just for the elite, it's for everybody. A lot of people were able to relate to our work because we're talking about things that were very personal and real and don't have to fit within certain metaphors.

Do you have a boyfriend these days?

I have a fiancée. We're looking to get married.He works for American Express. I got myself a hot hairy Jewish daddy.

How did you meet?

We met at the Monster. We celebrated our three year anniversary.

Has having a significant other changed your life?

Yes, very much so. I've had quite a sordid history.

And now you're more settled?

I'm much more settled. I fought really hard for marriage equality because I thought it was really important for our community and anyone who wanted to get married. I never thought I'd reach the day where I'd find myself with that possibility. I never thought that it would be possible. I'm 46 now and I felt it was really important for our community to be able to marry, but I was too busy fighting for the right to think I was someone who could be walking down the aisle someday.

Now that you're more settled, is your poetry less angry?

Some people get milder as they get older, and don't want to be in a state of rage all time.

Yeah, but how could you not be enraged? All you have to do is put on CNN and there's so much to be angry about and so much we need to fight for and so much that needs change.

Tell me about your Bushwick trajectory.

I'm a native New Yorker and grew up in Bushwick. I moved back after 9/11 because I wanted to be closer to my family. It was already starting to change so much back then, but it was particularly interesting for me because, as an artist, I appreciated the fact I could get an iced chai latte and, as a Latino, I understood the resistance toward gentrification. I had my feet in both worlds, sort to speak.

I do miss the friendly neighbors, families, bodegas and cuchifritos. It was more of a community then. Now it's sort of transient and overpopulated. I like that I can take my parents out for a nice brunch right in the hood and love being surrounded by art. My fiancé studies them well and can make a great hipster impersonation! It's also interesting that I was picked on as a kid for being gay and Bushwick was filled with machismo, I even survived a hate crime years later in the neighborhood, and now it's such a non-issue.