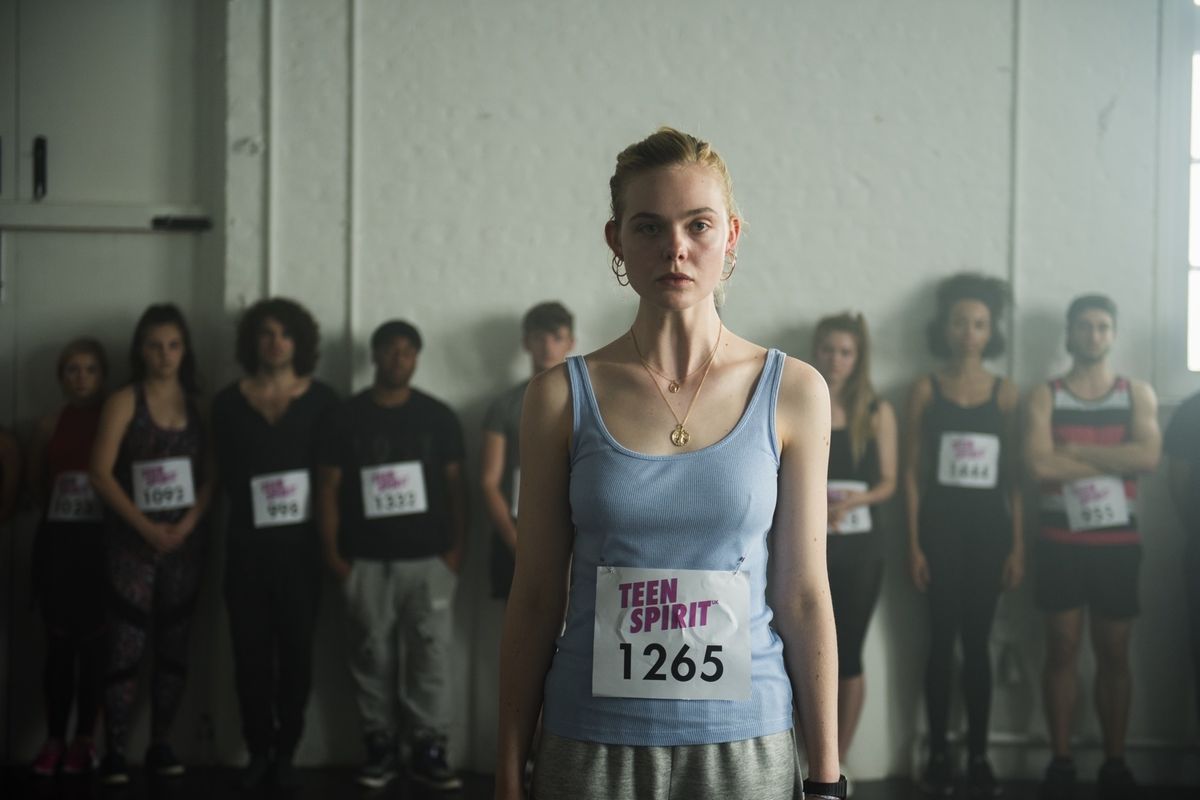 Each frame of Teen Spirit, the directorial debut from "The Handmaid's Tale" star Max Minghella, looks like a watercolor portrait of adolescent dreams. A dimmed yet hopeful color palette paints Elle Fanning's character, Violet Valenski, as a wallflower on the outskirts of her town on the Isle of Wight.

Consumed by music and struggling to contribute to her mother's stacking bills, Violet performs regularly in a small bar. Her soon-to-be-capturing voice is muted by patrons' small talk, with only a few keen listeners. Eventually, Violet spots an opportunity to audition, along with an assortment of her overconfident peers, for the fictional televised singing competition "Teen Spirit," and the story takes off from there. The film also incorporates a soundtrack of some of the most beloved pop songs in recent history at every twist and turn — and yes, Robyn's "Dancing on My Own" made the cut.

Although it wasn't Fanning's first introduction to the world of pop music, playing a rising pop star provided a unique set of challenges to the actress. To say that she conquered these obstacles, though, is an understatement; a product of all her hard work on perfecting the vocals for this movie is shown tenfold on the soundtrack. On the album, Fanning's voice melts beautifully into the folds of hits by Sigrid, Tegan & Sara, and Ellie Goulding among other covers.

As if that wasn't enough, the icing on the cake of Teen Spirit is the brand new track, "Wildflowers," penned by Carly Rae Jepsen, Jack Antonoff and Tavish Crowe. Of course Fanning delivers a great performance on screen — she's been acting for years and is every film's dream lead. The album's triumphant final track, however, cements Fanning's voice as a new force in the pop music industry.

PAPER sat down with Elle Fanning to discuss the filming of Teen Spirit, her experience recording the songs for the soundtrack, and whether or not she'd pursue a solo pop career in the future. The Teen Spirit soundtrack is out now via Interscope Records.

When you were reading the script originally, how did you go about conceptualizing Violet? What qualities and traits were the standouts for you?

There's so many layers to her. I feel like she's also a character that I can truly say is someone I've never played before. I love that she's not necessarily the most popular girl in school, but she's not necessarily the most likable girl in school either. There's a very hard layer to her, which I think comes with the feeling of being an outsider and growing up on the Isle of Wight, kind of away from everything else on this farm. Her father left her at a young age and she developed this defensiveness about her, and I always felt like there was a real tension with her when she was not performing. When she is performing, she finally feels like she can be free and let loose. It's also related to the hunger that she has.

I think it's important for young people, and all people, to see someone who has this dream and this passion inside them because I can relate in this industry that I'm in. Of course, there's a lot of rejection and people do say "no" to you, and you hear that a lot of the time and get your hopes up. After those rejections happen, you somehow have to figure out how to grab yourself up again and keep going because this is your passion. I love that kind of hunger and drive that she has inside her, which at the end comes out in this angry roar of a performance. She's very uncompromising in herself. She's very authentic, she doesn't feel like she needs to change for the industry or for anyone else. I think that pop stars today, they are very authentic and you can hear that in their songs and their lyrics. That's why people relate to them, because they are open about themselves. I can understand why people would be interested in her and why she would make it very far in the competition.

Yeah, you can even see that in those little moments, like when she's rocking out in her bedroom. That authenticity comes in really early, actually.

Yes, yes. When she's dancing by herself in her bedroom, it's like, we've all been there. We just need to do that to maybe get through the day. Obviously there was choreography in the film for certain sequences, but mainly for me dancing in the bedroom and for that last performance — it wasn't completely, completely choreographed. There were certain places I knew I needed to be, but kind of how I got there and stomped around was something that I found and wanted to make an homage to her "dancing by herself," and show that. I think the audience, they need her to finally perform. I was very conscious that Violet was a growing performer in the film. Even if I wanted to give it my all in every single scene and perform my heart out and sing it perfectly, I couldn't because Violet, she's not there yet as a performer. You don't film movies chronologically, so it's like, "OK, I need to be in Violet's head space right now and she's not there yet. She has potential, but maybe she doesn't sound as good yet."

I was gonna say, this isn't your first time performing, musically. I still bump the "Moon River" remix that you did with A$AP Ferg.

The only thing I'm mad about is that it's short!

I know, they need to do an extended version! That's amazing, that's so funny. That was kind of a coincidence because I was doing the commercial and they were trying to find someone to sing on that track. I was humming and Francis Lawrence, the director, was like, "Why don't we just get Elle to do it?" And I'm like, "OK!"

So you had to kind of reel yourself back in at parts, musically, but then, pop music ends up acting as a character itself in this film. It's one of Violet's sidekicks, especially since she's longing for this new landscape through the Teen Spirit competition. Were there any songs in particular, when you were combing through everything, where you were like, "Oh my god, I get to sing this?" They're all really famous pop songs.

They are, and when I read the script, all of the songs that are in the movie were written in the script. It was a super ambitious playlist that Max curated and put together. This is a small, independent film, so I think he was like, "Oh, we're never going to get these songs." It was very ambitious, but Interscope, who produced the film, they got us those songs because they represent a lot of those artists. That was kind of a miracle there, but the last song wasn't chosen yet, "Don't Kill My Vibe" wasn't chosen. That was nerve-wracking, because I needed to be the best at that song, but I knew it the least because I didn't get to practice it as much as the others. "Dancing On My Own" for sure was one of those, I love that song. Everybody loves that song.

I was like, "Oh, I don't want to ruin this song!" Also, a lot of people have done a lot of covers, amazing covers, of that song too. That was a daunting task because I do love that song so much.

Was there an elevated sense of freedom that you got to inhabit this role of a singer, versus some of your other dramatic roles? Did you find yourself changing your method at all?

I did a bit. It's still acting of course, and I still approach the character in the same way. Acting also can be very technical sometimes, but with the songs it does become technical at times. You have to take care of yourself, you have to remember, "I can't lose my voice." There are these things that you don't necessarily think about when you're not singing in a film. Normally, I would never analyze the scenes that I'm in. I would never watch the scenes back and analyze what I was doing wrong, but with this Marius would make me listen to myself. Every day we would record the song and he would send it to me and I'd have to listen to what we did that day and what I did wrong, basically, and what I could improve on. That was very different for me, I normally wouldn't do that with acting.

It's everyone's worst nightmare to hear your voice back.

I think you really hit it out of the park with the songs, and that's being reflected on social media. People are like, "Oh my god, she can sing?" I'm like, "She's been singing!" But "Wildflowers" is one of those songs that I think really sticks because you have that pop sensibility.

It's such an amazing song. I'm a fan of Carly Rae Jepsen and Jack Antonoff, who contributed to the writing the song. Are you planning on writing and singing pop music in the future in a more singular way, aside from film, or would you rather keep that as a film thing for yourself?

You know, I wouldn't be opposed to maybe doing an album. I wouldn't be opposed to that, who knows? It was such a fun experience, working with Jack — he's a genius. Being able to be in the studio with him where all these artists, like Lorde, Taylor Swift, and Lana Del Rey have recorded with him. It was really a dream come true, and it was a different world for me. It was just a world that I wasn't used to. Forming these relationships has just meant a lot to me, and I wouldn't be opposed to that. I feel like my voice, I mean it is pop-y now, but I feel like I'm a little folkier, like country. I don't know, maybe if I did my own thing it might sound different!

Your voice reminds me so much of hers because she started out with that folk-dance vibe as well. I think that's becoming a growing genre in and of itself.

I hope so. Also, pop music, what's so great about it is that it's not singular, you know? There's so many different mashups and different versions of a pop star now. You don't have to fit into one category, you can mix up the genres, which is so great.

With that being said, if you were going to audition as Elle Fanning for Teen Spirit, what song would you choose? Would it still be "Dancing On My Own," or do you have one where you're like, "This is my anthem."

My karaoke song is "No One" by Alicia Keys, so that's what it would be.