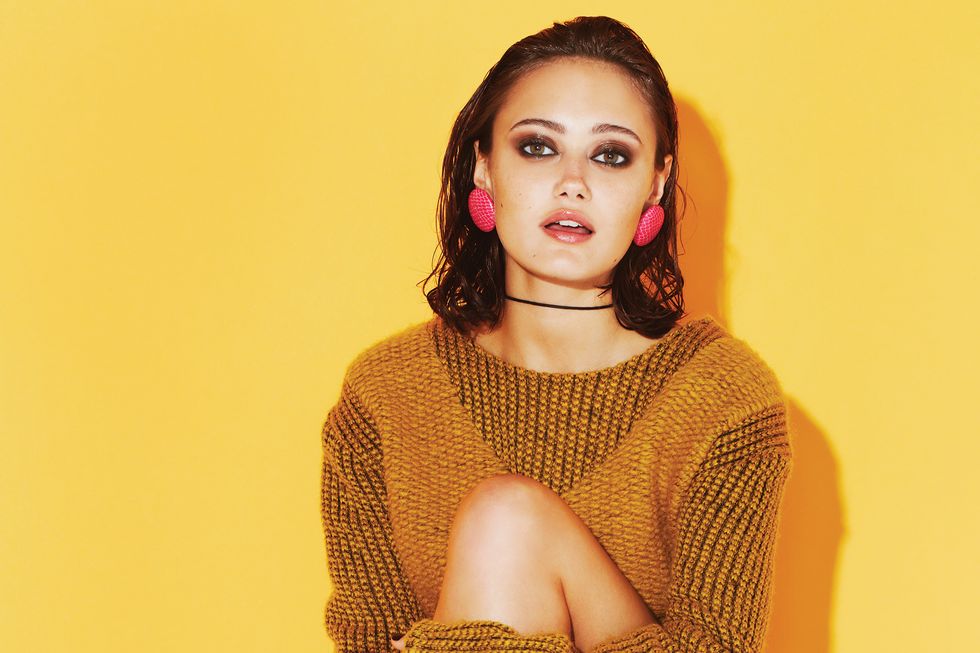 Ella wears a dress by Phlemuns and sneakers by Adidas

Ella Purnell pulls down her denim overalls, baring her torso and belly button ring. “I love this look," the 19-year-old actress says, giggling, as a photographer snaps shots of her inside a Los Angeles studio. She flashes her Adidas Superstar kicks, laces undone, as she twists into different poses like a pretzel. “I love the '90s!" she yells, twirling her newly-curled locks. “I love everything about it! There is something so beautiful about the grunge and carelessness. The style, the mood, the music, the fashion. Kate Moss, Winona Ryder and Johnny Depp in their prime!"

Just minutes later, Purnell swaps looks, this time donning a Phlemuns sweater dress and vintage earrings. Her hair is slicked back from a mixture of smoothing balm, elixir restore and repair oil. It looks like she dived into a swimming pool and popped out five seconds later. Her face is sometimes buried in her iPhone, but she's chipper and bubbly, smiling ear to ear. She's fresh off the plane from East London and psyched to be visiting the States for ten days doing publicity for her new fantasy movie Miss Peregrine's Home for Peculiar Children, out this Friday. She admits that she could never do modeling professionally, even if she's good at it. “I don't care what I look like," she admits. “I don't dress up much. I wear trainers and jeans. I would probably get so tired of people talking about my appearance all the time."

It's an ironic statement for a girl who got her start modeling as a baby. She switched to acting at age nine, when she started taking classes at the Sylvia Young Theatre School. Two years later, she auditioned for the play Oliver! and was cast in a London performance for one year. She says she absolutely loves theater and has also be into singing since a very young age. She would often strum on the guitar and play piano while singing classical tunes in French and German. She describes herself back then as a shy girl with glasses and greasy hair, sharing moments by herself reading in a corner at school. She didn't like sports or socializing much, but she had a big imagination. She would play spy games with her only friend in grade school. “Everyone would think, 'What are these girls doing?' But we didn't care. I was weird and didn't want to be cool. I was never the popular girl," she says. “I wasn't really bullied, I enjoyed being by myself. It taught me how to be independent."

Purnell received her first taste of movie stardom when she played younger versions of Keira Knightley's character in 2010's Never Let Me Go and Angelina Jolie's title protagonist in Walt Disney's 2014 Maleficent. Most recently, she wrapped the aforementioned Miss Peregrine's Home for Peculiar Children, directed by Tim Burton. She spent six months bringing life to character Emma Bloom, a girl who has the ability to manipulate air. For a week straight, she performed in a large tank surrounded by a green screen as the camera captured her underwater. Interestingly, her biggest fear is drowning, which nearly happened to her in ocean when she was 13 years old (she was rescued by a passing boatman).

Ella wears a dress by Phlemuns

On set, not everything went to plan. Tim Burton smashed his head into a lighting device, and he ended up going to the hospital. They thought he might have had a concussion, but he quickly recovered. Another day, the set got so smoky that the sprinklers turned on in the electrical room and everyone scrambled to get the equipment out. Still, the film was completed and looks to be classic Burton. “He's a genius. He's an easy, beautiful and kind soul," Purnell says of the director. "He's so smart and open to everything: your interpretation, views and opinions," she adds. “With his talent and level of fame, he doesn't have to be that way. But he is so wonderful and humble. He would always give me great scene advice like, 'Don't let your sentences tail off.' I appreciated that."

As she twists her petite frame into different poses like a pretzel, Purnell radiates with confidence, and that shy kid in school feels like a lifetime away. She credits her current poise and sense of self with something her mother taught her when she was young -- that every woman is beautiful. "If someone is going to say I'm too skinny, I don't care. I grew a thick enough skin to deflect from it," she declares. "I'm just happy with myself and where I am at in my life right now."