SNL's Ego Nwodim on Doing Her 'Residency in Comedy'

Ego Nwodim wasn't supposed to end up a comedian. A first generation Nigerian American, she was supposed to study medicine, become a doctor, and follow the cliché child-of-immigrants career path. And she did the first part —but it was on her own terms. "I made a deal with my family that I would get a degree in biology and be pre-med as long as I could move across the country to Los Angeles," she recalls.

Once Nwodim secured the degree, she was in exactly the right place (geographically speaking, at least) to pursue a career in entertainment. Fast forward nine years and she's performing on the biggest stage in comedy. Still in her sophomore year at Saturday Night Live, Nwodim has already been making waves, history, and everyone laugh. From dancing the cha cha slide with John Mulaney to pulling over zaddies on the street as a thirsty cop with Leslie Jones, Nwodim is an essential voice on the show. Let's not forget her scary accurate portrayal of Adelaide in the Us-meets-Discover-Card-commercial mashup. 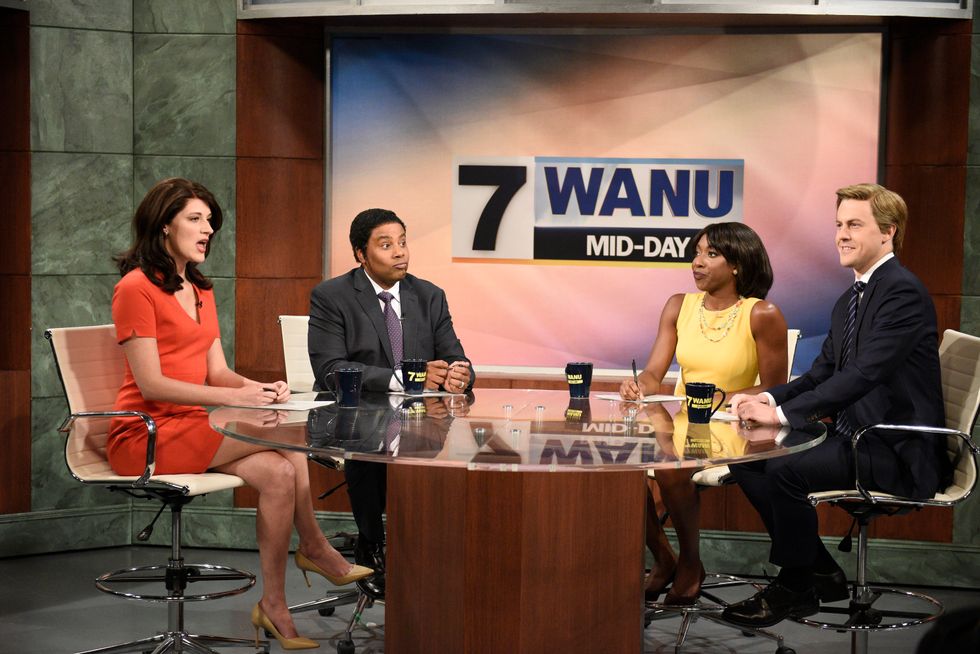 Nwodim's only the seventh —and currently the only — Black woman on SNL's cast, and she's not afraid to put the jokes aside and get real about what this work means to her and those watching. "Anytime anyone messages me something like 'I'm inspired by you,' I feel good and it feels like I'm fulfilling my purpose, or beginning to at the very least," she says.

She's always been "passionate about working hard" — which, you kind of have to be when you're putting in long hours six days a week —and it's this passion and "desire to achieve" that has always kept her going. So no, she didn't go on to be a doctor of medicine, but she tells us instead about her experience doing her "residency in comedy."

We also talk about forming female friendships on set, being unbothered on a beach while Shane Gillis was getting fired, and looking ahead to 2020.

When you have a lot of people telling you to do one thing, it can be hard to really listen to yourself. Were there times where you thought, "Okay, maybe I'll just continue pursuing medicine?" Or how did you listen to that voice and decide comedy is what felt right?

Well, a few answers there. As far as listening to the voice inside me, I knew that I didn't want to do medicine. Also, another voice was like, 'It's your life.' Your family and your parents can have goals for you, but ultimately you have to live with the choices that you make. At a certain point, there's no amount of encouragement or persuasion from people outside of you that is going to make living a life that's not true to you enjoyable or acceptable. I mean, you have one life and I feel like you should do with it what makes you happy and what brings you joy… I have the perspective that my family, each member of my family was living their own life and I was gifted my own, so I get to do with it what I want.

So was SNL the dream?

Well, once I decided that I was doing comedy, which was a few years into me pursuing a career in entertainment and acting, I wouldn't say that I had any particular goal. SNL seemed so far out of reach. There's been so few cast members in the history of the show and over the course of like 45 seasons. There've been like roughly, if I'm not mistaken, somewhere around upwards of like 150 cast members and 45 seasons. So that would suggest that the odds are certainly not in your favor to be employed by SNL. So I don't know that I had that particularly in mind. I have a belief that if you do what you love and you pursue that, the money, the job opportunities will ultimately come. So I always knew I wanted to be able to support myself and be a successful actor and comedian.

What has your experience been like with the culture behind the scenes?

The culture is incredibly fast paced and that is really enjoyable because I do think I can get bored easily, so I'm happy to be here at a place that is ever changing. No two days are the same. Each week is sort of self-contained, so you don't know what to expect beyond the fact that like, on Mondays we have pitch. Tuesday it's writing time. Wednesday we'll have a table read, and so forth. But beyond that each week is its own beast and that is very exciting. I feel like sometimes I'm like, basically an ER doctor for comedy, where you know, an ER doctor doesn't know what to expect. They don't know what patients they're going to be seeing on any given day. I almost feel similarly, minus blood and stuff.

I love the term "doctor for comedy" as a way of encompassing that you're kind of on call for the schedule and the way it changes.

Oh yeah. And I mean, my best friend is a medical resident right now and I'm like, 'I'm in residency for comedy." We both have crazy hours, don't get too much sleep, we're on call. 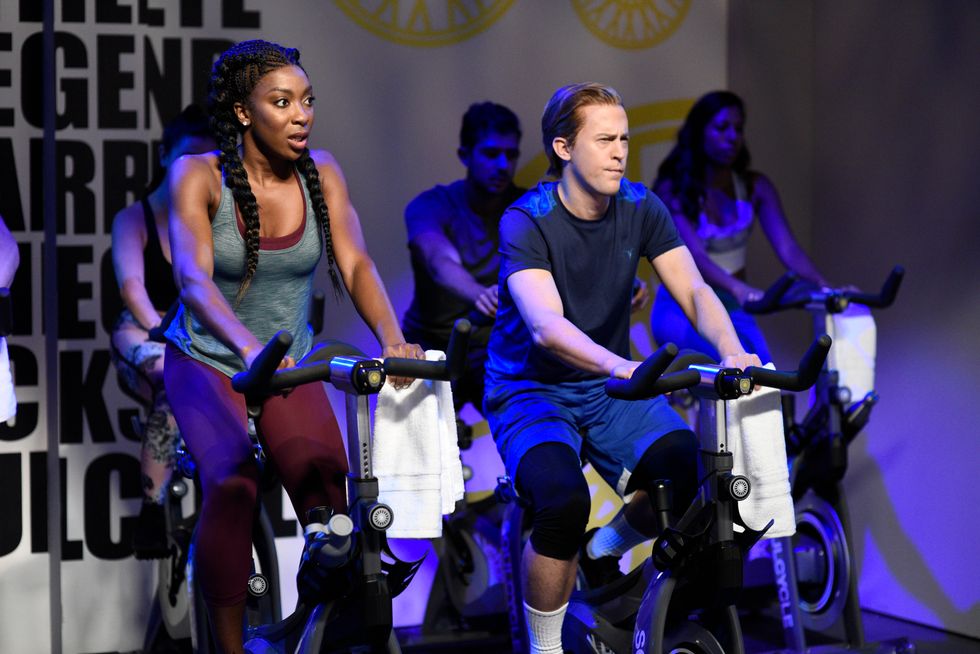 What does your day to day look like with your co-workers?

Everyone is bringing their best each and every week. And I think that everyone's sort of competitive with themselves individually to be the best they can be every single weekend, bring the best comedy they can bring every single week. And you have to remind yourself to have fun as well. So it's really supportive. I feel particularly close to so many of my castmates. You develop a sort of camaraderie because we're going through the trenches and doing the hard stuff together. And a lot of times I feel like when I see my castmates get a win, or have a really great moment on the show, it feels like my win too.

I wanted to specifically ask about some of the female friendships on set, because at least from your social media presence, it really seems like you have some incredible bonds with a lot of the women you do comedy with.

It's really refreshing and rewarding and makes this journey and this job all the more enjoyable. Having some incredibly funny women on the cast, like Heidi and Melissa especially, and Aidy and Kate, Chloe, I mean I could go on and name everybody, but it feels really nice to have their support and be inspired by them. I watch them and I learn from them just watching them. And that's nice. I wouldn't want to be on this journey without any female cast members, I'll say that. So I am happy to have them and we sort of have this unspoken bond, but we confide in one another. We encourage each other and run lines with each other and it just makes it a really special place and a special time. And I tell them often, I'm so grateful to be here with them.

It's empowering as an observer, as someone not in comedy, to watch that form as well.

It's been really like one of the gifts of being here at this time, I would say is those friendships that I've developed with my cast members and especially my female cast members.

I'm curious about how the Shane Gillis situation shook up the cast and the culture on set. How did you guys respond to that internally?

I mean we were on break when that whole situation happened, to be totally honest with you. It may have appeared, they made the PR announcement about the three hires and it may have seemed as though everyone had started work, but I was on a beach somewhere. So this wasn't happening while we were all together or back at work for one. So I think that that's perhaps the thing to clear up, but we've been in support of one another and it's not really too much of a discussion that we have because a lot of us, at least I can speak for myself, I've never even met Shane Gillis. 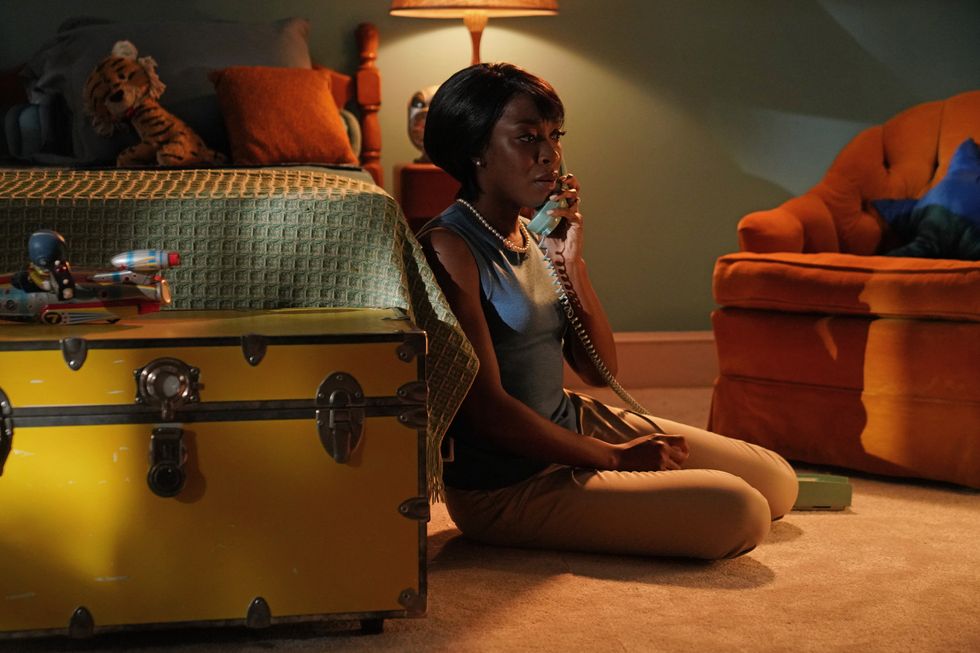 A lot of that was also a conversation of representation, what that looks like and how SNL handles it. What does it feel like to now be the only Black woman on SNL since Leslie Jones left?

I would say I consider it a privilege and an honor to be a representative of Black women on the show. Now that Leslie's gone, I don't know that I feel more pressure, because Leslie was a great example of doing a great job and having the audience's support. So that was inspiring to watch and see a Black woman right before me and to be working with her while she was there in her last year and have the audience just adore her so that was inspiring. And now I don't know that I feel a ton of pressure, but it is certainly something I take seriously and I really do consider it an honor and a privilege. So that's sort of my approach to it. That's why I feel fortunate to work, part of the reason I should say, I feel fortunate to work where I work because I know I'm the only Black woman.

And while that could feel like pressure, I have more of a positive outlook on it and feel like any work I do here could have a positive effect on young Black women who think they want to be on SNL one day or somebody in comedy or a young Black woman in comedy who's like, "I want to do that" or "I want to be an actor" it's just helpful to see yourself in the media and I don't know how many examples I had of that coming up myself, but I feel so incredibly fortunate to have a hand in that.

Who are your comedy heroes?

I mean, Maya Rudolph, Tina Fey, Amy Poehler. A big one is Jamie Foxx for me. And I've been forgetting to mention him, but Bernie Mac is also a big comedy influence for me.

There's a really exciting show coming up tomorrow night with Eddie Murphy and Lizzo. Is there anything you can tell us that you're excited about?

I am excited to see Eddie work and to see that in real time, in real life, up close and personal. He's somebody I grew up watching and admiring and being entertained by so to get to do that and be in such close proximity is really exciting, just the idea of that. As far as what the show will be, it's Monday and we haven't even had pitch yet. It could truly turn into anything and that again is very exciting. So I'm expecting some very funny stuff. It feels like it's going to be a historic show. Eddie's back, and we're all really really excited about it.

Now going bigger, 2020, we're approaching the new year. Are there other things you're excited about, looking into the new year in comedy or in life?

Yeah, we're excited. We shot that over the summer. And I'll be in Brockmire as well, which is on IFC. So I'm just excited to do more fun stuff, see some more cool places, and make some more people laugh.

Aidy Bryant Isn't a Fan of Using Euphemisms For 'Fat'