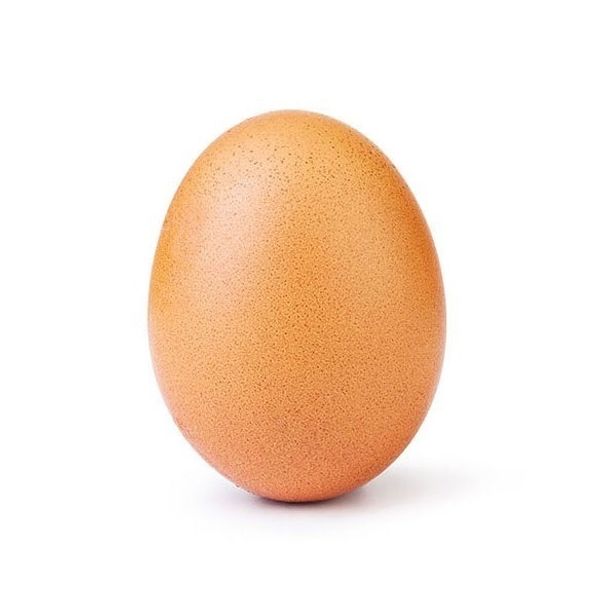 The World Record Egg Is Now Reportedly Worth $10 Million

From non-profits to luxury fashion houses to tween influencers, everyone wants to go viral. Their hunger has transformed the notorious viral "world_record_egg" (which broke Kylie Jenner's record to become the most liked photo on Instagram) into marketing gold.

Today the Atlantic shared a report detailing some of the more exceptionally insane grabs in the ongoing race to monetize the egg. According to the report, viral marketing agency Jerry Media of Fyre Fest fame (of course), pitched a campaign to Need To Impeach, a non-profit dedicated to impeaching Donald Trump.

The concept: convince the egg (the account owner has told the press only that she's a woman from unaffiliated with any company or organization) to sign onto an impeachment campaign. According to the Atlantic, "In a slide deck, Jerry Media proposed that the egg crack to reveal the words Impeach Trump as Trump popped out and did the chicken dance. The agency even created a short animated video demonstrating the stunt."

Need To Impeach passed, but the offer is demonstrative of the egg's perceived power. The Atlantic quotes a number of digital media and advertising execs talking about the its value. VaynerMedia's Nik Sharma told the outlet: "Being the first brand to crack out of the egg is worth at least $10 million," and said he'd advise his own clients "to spend on the egg instead of the Super Bowl."

Keri Goff, creative director of DoSomething.org told the Atlantic that she can see someone using the egg to announce a presidential run, and emphasized the appeal of "big social-media moments" to Gen Z.

However, this could all just be a middle-age misunderstanding of how viral trends work. Fast Company suggests Sharma's estimated figure may be vastly inflated. "It's more likely to be a huge letdown. What people liked about the egg was that it was fun and random and one-off. They weren't signing on for an extended branded event," writes Cale Guthrie Weissman.

Plus, it's not clear if the egg's official co-sign will make that much of a difference. It's possible that brands fighting to work with the egg are losing the window of relevance, since many entities are already exploiting the egg's image, without any tie to the official account.

Burberry shared a photo of a branded egg shortly after the initial viral hailstorm, in an attempt to promote their spring 2019 season. Countless fake egg accounts have sprung up within hours of the egg's rise to fame, while regular influencers even changed their handles to variations on "world_record_egg" to try to confuse people into following them. Meanwhile a world record egg-themed iPhone game is apparently #11 on the App Store right now, one of hundreds of new egg-related apps including one game called "World Record Egg vs Kylie." We even put it on a digital cover.

Moments after PAPER reported on the egg beating Kylie Jenner, I received a pitch from Grubhub, inquiring if I'd be interested in writing about their most ordered egg dishes, to help "celebrate the egg in all its forms."

Even the egg's social media moment isn't enough to make that story interesting, though it definitely seems possible that a savvy brand could find just the right egg cameo to make people laugh, rather than roll their eyes at the blatant Gen Z-pandering. We'll be keeping an eye out this Super Bowl season to see if any such contenders end up cashing out on that 10 million.