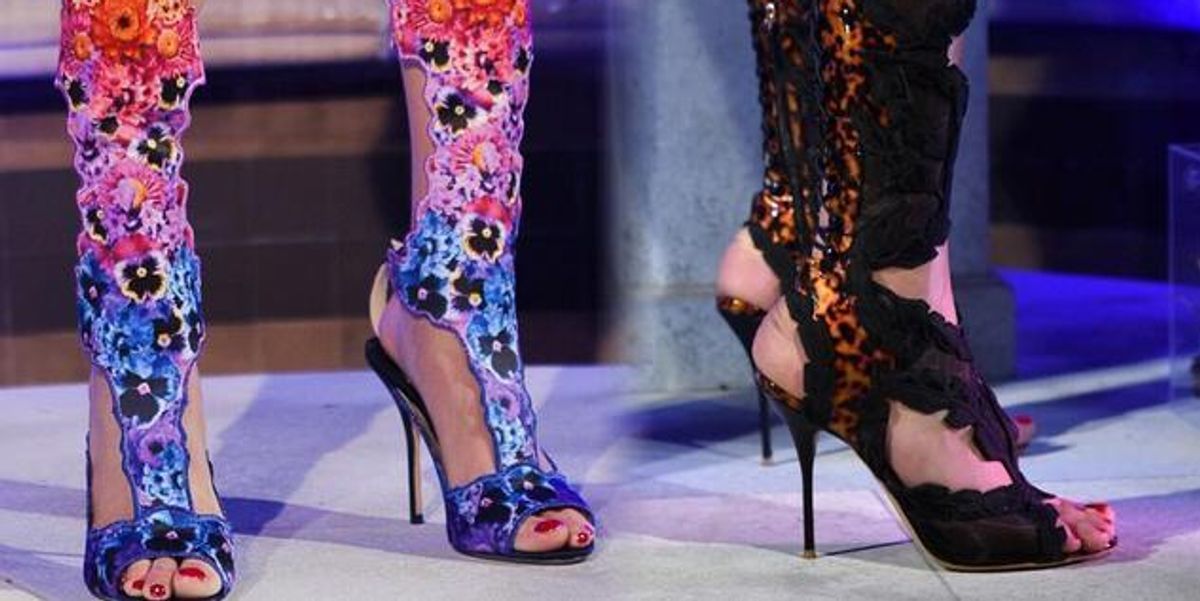 But don't call it a comeback.

"This isn't a comeback", Edward Meadham states definitively. Known for being one half of Meadham Kirchhoff, London's departed high-energy label devoted to punk brashness and exaggerated femininity, he is careful to be clear that despite news headlines, he has not returned to Fashion Week. Instead, Meadham collaborated with whimsical footwear designer Sophia Webster, to design garments for her Fall 2016 Presentation.

SOPHIA WEBSTER on Instagram: “Still buzzing from yesterday's #LFW show 💁🏼💁🏼💁🏼 Collaborating with @edwardmeadham on the looks was a dream come true 🤗 What a legend 🙌🏼🙌🏼🙌🏼…”

Since Meadham Kirchhoff formally dissolved in 2015, Edward had been taking some needed respite. He was hospitalized for a month with complications from pneumonia and, these days, is simply working to ensure his health and energy, along with spending quality time with his cats and tiny Instagram-loving Pomeranian, Miss Trojan. Shortly before Christmas, Meadham was contacted by the team at Sophia Webster. They were interested in pursuing a collaboration in the form of dresses for the models to wear during Webster's upcoming footwear presentation. After a couple weeks during the holiday, Edward sent Webster a few sketches based on the shoe designs he'd seen. "It was really about pleasing her, and helping her tell her story", he explains. "I'm much of a control freak, and this time it was not about me. I was creating props, essentially, for her presentation." Which means, of course, that the dresses will not be produced for ready-to-wear. Meadham spent the beginning of the new year constructing the patterns and toiles in his own flat. When Meadham Kirchhoff dissolved, so did his access to a studio space, and this collaboration was sprung from his spare bedroom. "I started here, and now I am here again. It's as as if the last 13 years never happened." A pensive thought, to be sure, from a designer whose unambiguously radical clothing has spawned legions of fans from Rihanna to Tumblr-obsessed pastel teens.

SOPHIA WEBSTER on Instagram: “#SophiaWebsterAW16 🌸🕸🌺Our gothic girls were all booted up at my #LFW #AW16 presentation in the 'Bloomsbury' and 'Carrie' Knee high sandals…”

He was immediately drawn to the project because of its references to Lydia Deetz and Miss Havisham. "In many ways, I would not be the person I am today without Miss Havisham," he muses, recalling that he first saw the 1946 film version of Great Expectations as a very young child, and was bewitched by the tormented bride's melting, mouse-ridden wedding cake and tattered lace. These themes would appear over and over in Meadham Kirchhoff's fantastical collections -- notably beginning with their breakout Fall 2010 show 'A Rebours,' which featured models draped in somber tulle veils, casting a technicolor ghostlike glow above painfully delicate slip gowns. Indeed, the showpiece of the Sophia Webster collaboration -- a wedding gown with a sizeable shredded train -- brought on vengeance of its own. "The gown was literally too big for my flat," Edward laughs. "I had to cut off yards of fabric because it would not fit into the room. And when I brought it to set, I was concerned that I'd cut too much off and it wouldn't fill the space, but it worked out fine in the end."

Susie Lau on Instagram: “An ode to Lydia Deetz from Beetlejuice @sophiawebster with all the fashion pieces created by @edwardmeadham 👏🏻👏🏻👏🏻”

The designs had many other of Meadham's signature flourishes, including wide lace panels set halfway through the sleeves of a see-through teal mini dress. Lydia Deetz appeared in the form of a Lolita silhouette dress with stiff lace trimmings, made all the more hallowed with Webster's dramatic butterfly-embellished heels that cross-laced all the way up the model's leg right up to the hem of her dress. And Meadham's beloved tulle veils made a return, topping a princess crown and floral headpieces.

If this isn't a comeback, what would his return look like? "Much different", Meadham says. "I'd have complete control over everything." It was always Edward Meadham's unyielding passion behind his singular vision that allowed Meadham Kirchoff to flourish in an industry heavily reliant on commercial appeasement. London Fashion Week in particular, known worldwide for its conceptual designs, feel the pain of Meadham Kirchhoff's absence, evident in this season's more pared-down works. "Every single Meadham Kirchhoff collection was me baring my soul, down to its barest parts." And while adoring fans still mourn the label's loss, perhaps it is beneficial to remember that Edward Meadham's talent still exists, and Sophia Webster helped bring it back to this realm for one more bow.