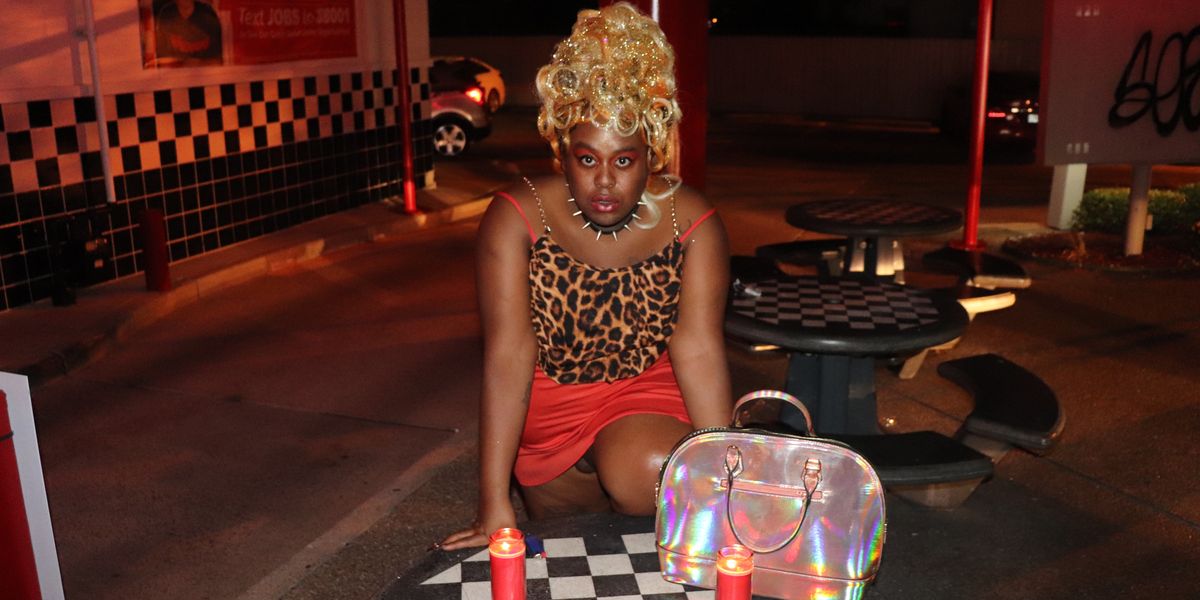 Edge Slayer: The Spellcasting Musician Who Won't Text Back

Edge Slayer is in a cab headed from Rainbow after buying several pairs of five-dollar shoes when we connect on the phone. We're talking about her spooky DIY new music video for "She Don't Text Back/Spell Check," premiering today on PAPER. The hypnotic double-single is from her upcoming album, C00CHI3, out in January on LCD Soundsystem guitarist Tyler Pope's label, Interference Pattern Records.

When styled right, a five-dollar shoe or a $10 dress is a full kiki and a carry, all fulfilling Edge's mission of looking and feeling hot, as viewers will be able to witness in her new video, directed and edited by Elliot Brown Jr. Not to mention, in the sweltering New Orleans heat, it's just more practical to wear fast fashion than worry about ruining designer duds. In the video, there are scenes of Edge posted up in a sexy short dress talking shit on the phone before a fun conjuring scene in a kitchen that involves a cut-up Barbie doll.

"For me, as long as I can look like some type of video hoe, Instagram model type bitch, like somebody you'd wanna to fuck, I'm good," she says, serving up a rippling, familial cackle. "I'm not really trying to serve bougie high-end bitch, I'm trying to be like fuckable nasty hoe, maybe. Sometimes I am just wearing napkins to cover my nipples or whatever because it's so damn hot. We're basically next to the Equator after all!"

For last year's debut, self-titled EP, Edge crafted a divine mix of ambient sound with grittier textures pulled from the club, vogue, and New Orleans bounce scenes of which she is part of. Tracks like "More Femme" and "No Safe Space" stood out for their dual ability to inspire deeply felt movement in the listener, while encouraging reflection on how trans women of color seek safety in a dangerous world.

On C00CHI3, Edge makes accessible (but still experimental) sex and self-love songs imbued with the inherent magic of her city, ancestral energies, and her wild sense of humor. Growing up, Edge was surrounded by femme-powered magic, and she pays homage to it more than ever now.

"We have to first say that my mother and savior, [Creole Voodoo queen] Miss Marie Laveau is definitely one of my favorite Black witches of all time, and such an inspiration to me," Edge says. "The women of my family encouraged that part of me as well... there's so much deep ritual in my family. My mom pretty much let me do whatever I wanted to do. She would take me to the witch store at 10, so I feel like that is very important."

"She Don't Text Back/Spell Check" is an enchanting first taste at what listeners can expect from her new work. Where Edge's voice was previously more obscured, she is now up-close and personal, singing luscious harmonies evoking your favorite '90s R&B divas.

The lyrics to "She Don't Text Back" are all about personal power and autonomy, with Edge flipping the script on hapless dudes who might otherwise disregard her: "I want to fuck you/ Don't want to talk to you/ HMU whenever you want to freak," she sings. On "Spell Check," her tongue is even sharper, spitting barbed, black-magic lyrics at scammers and wannabes: "You fucked with the wrong witch/ Scummy crummy dummy bitch/ Them lil magic tricks ain't shit/ You can't hex me lil bitch."

Part of Edge's openness comes from a newfound willingness to collaborate — no easy feat for the Leo with a Virgo rising and moon in Capricorn. "You know a bitch is bossy," Edge says. "She really likes things to be the way that I like them to be so it was cool collaborating this time so that my music can be more accessible." She worked with DJ and producer Suicide Year, who produced a handful of sounds fans will hear on C00CHI3.

One of Edge's favorites is a sassy number called "Where My Hug At Nigga." "But you know, I don't want white folks saying 'nigga,'" Edge adds. "I know they are going to sing the song at the end of the day but I don't want them to be like, 'My favorite song is 'Where My Hug at Nigga.' I don't want to have to slap nobody."

But no matter what she's exploring sonically, Edge's music is rooted in her experience as a Black trans woman committed to creating safe space for other queer and trans people of color — to dance, let go, feel their oats, and get free. Edge, who grew up in the Midwest and left for the South following personal traumas and the 2014 Ferguson Riots ("when all the white people around me just started admitting the racism and various phobias") knows that for safety for trans women is more needed than ever. In New Orleans, she curated a regular, witchy party called called Séancé, centering trans femmes and nonbinary people of color. Its very existence acknowledges the city's legacy of such people as cultural pioneers — from Big Freedia to Katey Red on down.

"All of the songs on C00CHI3 are about my feelings, my experiences," Edge says. "[For example], 'Where My Hug At Nigga' is about what happens when you go to the club, and all you want is your backwoods blunt. I have the weed in my pocket, it's loud, and you're ready to get home, bitch. And there's some man, he's like, 'Hey, beautiful,' breathing hot breath in your mouth, all up in your face, and then you're like, 'Please stop talking to me,' so it's angry."

Edge continues: "I'm not saying all that to some dude though, because at the end of the day, I am a Black trans woman, so I'm trying to be nice so I can get the fuck out of there, because unless they have a weapon, I'm not popping off because I don't want to become one of those girls who get the flowers later... because like, we deserve roses and respect and to have a great time while we're still here. That's what I stand for."

Edgeslayer will host two release parties celebrating her new music. The first is tonight at the Ace Hotel New Orleans' Three Keys Lobby and the next is November 2 at Happyfun Hideaway in Bushwick. Follow Edge (@therealedgeslayer) for more, stream her work, below, and buy it here.