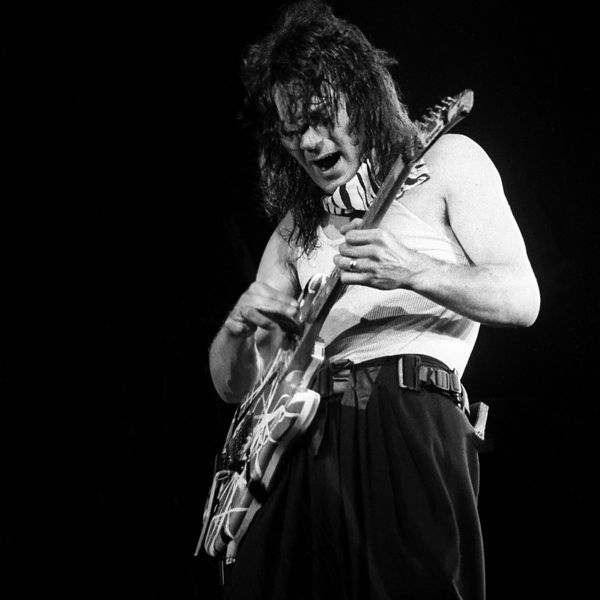 Along with everything else going on in 2020, we've lost many classic rock icons, from Little Richard to Bill Withers to John Prine. Today, the world lost another influential guitarist, Eddie Van Halen, who died from a long battle with throat cancer. The Dutch-American lead guitarist, songwriter and founder of hard rock band Van Halen was 65.

News of Van Halen's death first broke on Twitter and Instagram, after his son Wolfgang announced it. "I can't believe I'm having to write this, but my father, Edward Lodewijk Van Halen, has lost his long and arduous battle with cancer this morning," his son wrote. "He was the best father I could ever ask for. Every moment I've shared with him on and off stage was a gift. My heart is broken and I don't think I'll ever fully recover from this loss. I love you so much, Pop." Wolfgang Van Halen (Van Halen's bassist since 2006) also shared a photo of his father from seemingly happier times, receiving thousands of likes, shares and retweets.

According to TMZ, Van Halen died at St. John's Hospital in Santa Monica, CA on Tuesday. He was surrounded by his wife, Janie, his son, Wolfgang, and his brother Alex, famously known as Van Halen's drummer.

He was born in Nijmegen, Netherlands on January 26, 1955, and later immigrated to the US with his family at the age of eight. He became interested in music, and ultimately guitar, early in childhood.

Van Halen's last public performance with his band was at the Hollywood Bowl on October 4, 2015, and he remained a household name in rock for over five decades. Van Halen's influence on modern rock music is immense — although hailed as one of the top guitarists of his time (and all time), Van Halen notably never learned how to read music nor studied music theory, surprising countless listeners and gaining a reputation as being entirely self-taught.

Often dubbed the "Mozart of Rock Guitar," he did not invent the two-handed tapping electric guitar technique, but certainly popularized it and introduced it to a mainstream audience. With self-penned hit tracks like "Jump," "Jamie's Cryin" and even the guitar solo on Michael Jackson's "Beat It," it's hard to think of the '80s without Van Halen's electric sound. He was inducted into the Rock and Roll Hall of Fame with his band in 2007.

On Twitter and Instagram, there is a current outpouring of tributes from fellow classic rock musicians, such as Billy Idol, Lenny Kravitz, Brian Wilson and Red Hot Chili Peppers bassist Flea, to modern figures like John Mayer, honoring Van Halen and his legacy:

I just heard about Eddie Van Halen and I feel terrible about it. Eddie was such a great guitarist and I remember ho… https://t.co/1S9xHQl5dR
— Brian Wilson (@Brian Wilson)1602015487.0