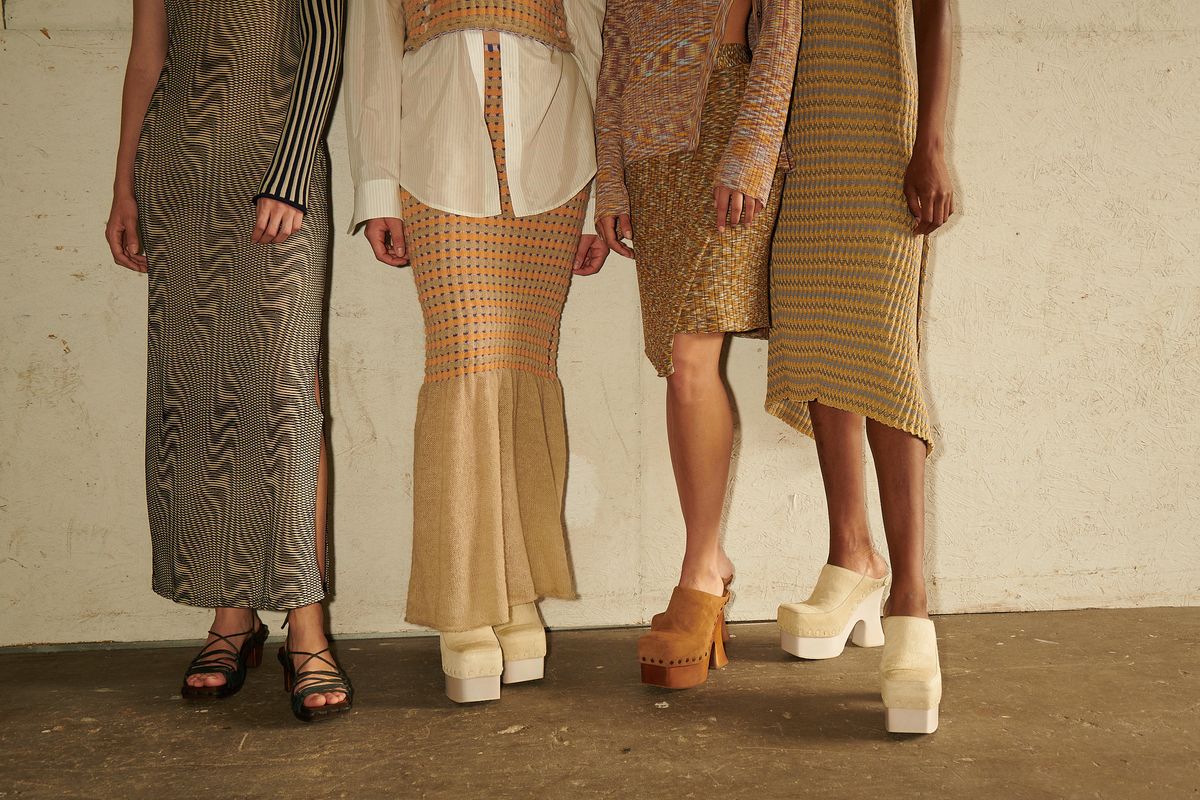 Back in February, much-loved downtown label Eckhaus Latta released a collaboration with UGG for their Fall 2019 collection. The shoes were square-toed and fuzzy, cozy but structured — ideal for kicking trash away on slushy Chinatown streets. And for Spring 2020, the two brands have come together again for a selection of unexpectedly summery styles, utilizing fabrics like lamb suede and hair-on cowhide to keep things weather appropriate.

"Because there isn't a tradition of what an UGG summer shoe looks like, we felt a kind of liberty to explore that language and find something that would be a nice potential meeting ground [for both of us]," designer Mike Eckhaus said in a phone interview.

"UGG has so many capabilities, and they do produce so many different kinds of shoes, even though the UGG boot might be what they're famous for," designer Zoe Latta added. "All of their offerings are pretty diverse, and so going into sandals or clogs or heels is something they've already done. We're not inventing that wheel for them. It's just a platform for us to do a lot of different exploration."

Eckhaus added that he and Latta looked to past UGG styles as a jumping-off point for the new collection. And while the range does incorporate more practical sneakers and boots (and some wild wavy, chopine-like wedges), there are a few pairs of lace-up stacked heels that are very clearly for what Latta deemed the "hot girl" early-2000s UGG customer — very Bratz doll meets Dimes Square.

"I think most people in America can remember that time when [UGGs] were just randomly everywhere," said Latta. "I'm from like a surf town, so they were the coolest thing someone could be wearing for the majority of my upbringing. And then they became a mass cultural thing. [They were] like a hot girl thing to wear. They were very, very cool, and intimidating."

I am also from a beach town, where you'd see UGGs (or the fakes) on everyone from gnarled surfers to the scariest girls in middle school, who would always pair them with short skirts — a silhouette that's easiest to pull off when your legs have yet to reach puberty.

For Eckhaus, who grew up in upstate New York, UGGs were part of a "popular girl, hot girl uniform of 7 Jeans, Juicy Couture." He wasn't quite in the crowd, but now counts himself as a true fan, adding that he'd wished he'd jumped on the bandwagon earlier. UGGs — the most comfortable shoes known to man — are hard not to love.

"Around the holidays last year, I remember my two-year-old niece and my grandmother-in-law both received UGG boots for Christmas, and they were both overjoyed," said Latta. "It really was profound for me to see how much UGG exists also just out of a fashion space, and really just in a utilitarian clothing space–that it's not about trends, it's about comfort. That's beautiful. That's really exciting to us."

Photos by Nathan Perkel (courtesy of UGG and Eckhaus Latta)