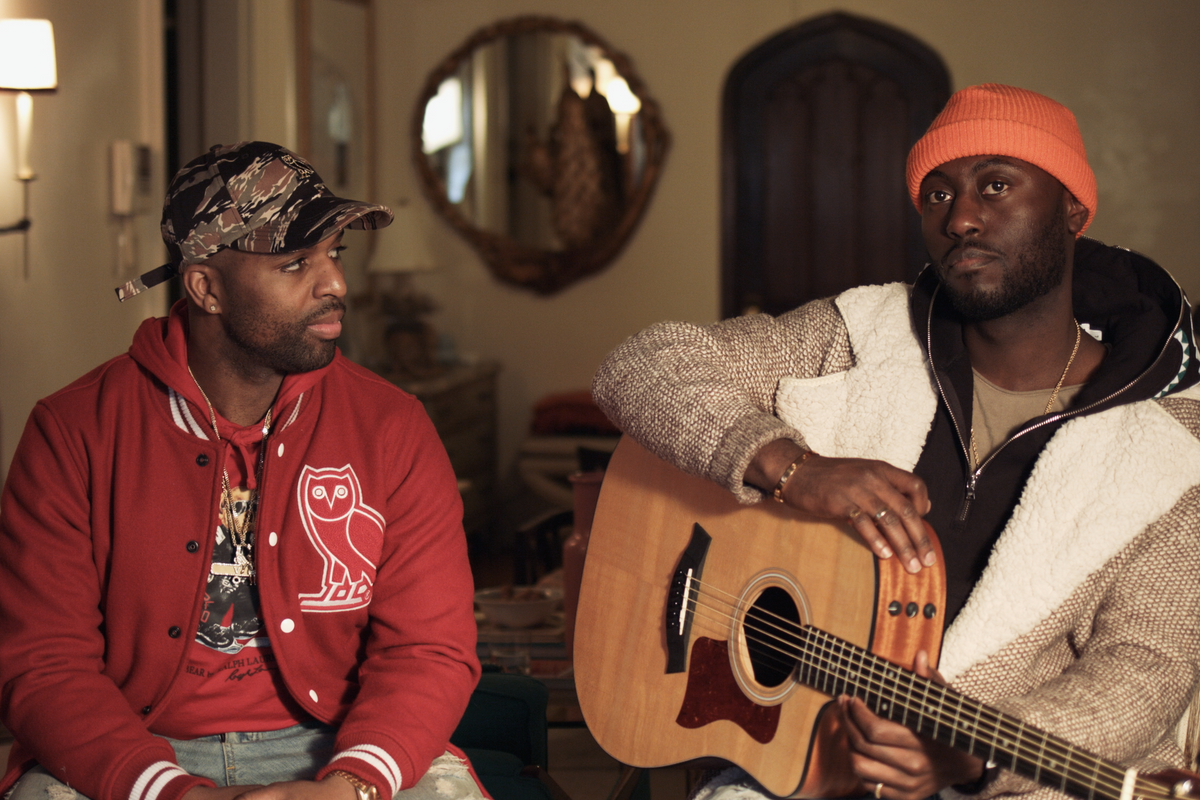 dvsn Stopped By The PAPER Penthouse

While history has seen musicians shroud themselves in mystery to maintain their artistic integrity (all together now: Björk, Frank Ocean), the social media age is making this undertaking increasingly difficult. It's rare when we don't know everything about our favorite entertainers — where they are, what they're doing, or wearing, or eating — but, somehow, dvsn (pronounced division) manages to stay completely out of the spotlight. In fact, some would be surprised their songs are the work of a duo, not just one vocally-blessed R&B singer with a penchant for picking great producers. But this is what makes DVSN so special.

Comprised of singer Daniel Daley and producer Nineteen85 (long-time OVO collaborator), dvsn has a power far beyond being your sex soundtrack of choice (though they're definitely a good fit), they're shifting the way we approach R&B. Daley's soulfulness, coupled with smooth use of Nineteen85's synths, makes for a sensual sound, rather than melodic hip-hop. It's no wonder that after releasing their first two tracks on SoundCloud in 2015, they immediately caught the attention of Toronto's unofficial king, Drake. Since then, dvsn has released two full-length projects, Sept. 5th and Morning After, which have been successful internationally and further established Toronto as a talent hotspot.

PAPER sat down with Daniel Daley and Nineteen85 to talk their inconceivably quick come-up, the power of two and why sexy came as a surprise.

dvsn has only been around for a couple of years, but it already feels like an R&B staple. Were you prepared for the response?

Daniel: It hasn't even been two years — it's wild. It's hard to say because it's one of those things where you don't really know what to expect until you get into it. We were on their radar probably by the end of 2015, but we didn't actually sign [with OVO] until the beginning of 2016. Shortly after our album came out two or three weeks later. The only thing we did know was that we had our album pretty much ready to go, so when they basically just said, "If you're ready we can do this now." We were like, "Let's go for it."

It's easier when a big label signs you or massive star like Drake openly supports your music, but you guys don't have that.

85: We've been lucky enough to have people to love and appreciate us for us, and what we do. We still give them credit in the sense of how they definitely put a bigger spotlight on us.

You also have these Toronto artists giving back to the city, which doesn't happen everywhere.

85: It's interesting to see how much it's being birthed at the same time. It's all so close to each other.

Even 10 years ago it wasn't the same.

85: It was completely different.

Daley: It came at a good time because not only was Toronto booming, but it seemed like a new resurgence of R&B started booming around the same time, so we kind of got both.

How did you two link? Were you collaborating for a while?

Daley: Just mutual friends. We have friends that have known each other. Toronto is pretty close-knit, especially the music scene. You know a guy, who knows a guy, who knows a producer. We kind of linked through that, then when we linked we realized that we just had something different.

What went into formulating the sound?

85: The vision I think was for us to just do what we wanted to do.

Daley: We both have influences from different things: Hip Hop, R&B, even stuff outside of that. When we sat down, it just all spilled on the table at the same time.

"With Me" and "The Line" blew up when they came out. Did you put those out as singles?

Daley: We just put it out on SoundCloud, and he ended up playing it on OVO Sound Radio because he had a DJ guest spot one time.

85: At that time no one ever heard of us and I think we just put it on SoundCloud.

85: Yeah it was the week before. Actually it ended up being on September 5th. We didn't even realize until someone else spotted it.

So that's the significance of September 5th, the title of your debut album?

Daley: We kind of mark it as our birthday. He had a beat that I ended up just falling in love with quickly. I was like, "Listen I don't care who ends up calling you for this beat — because he was popping as a producer at the time — I don't care who calls you, need to put this aside because this one's me and I'm in love with it." I guess that turned into the first official record that we said we're keeping for ourselves. It's just the beginning of the vision.

What was that like for you, 85? Having this golden beat, and knowing you could give it to anyone...

85: You sort of just know when it works. Especially now that I've had the chance to be in a room with so many different people. It's certain people that no matter what when I work with them, the end result is just so much different than if I just randomly give beats to people. I've been really blessed with the people I do consider my close team because I don't think there are many artist/producer relationships anymore that really benefit from that. It's not like before where that was almost what all of the big artists were known for.

85: Yeah, you know, who they were consistently working with.

It's also rare for you guys to put yourself forward as a duo. Was that always the plan?

Daley: He's just as involved. I think sometimes it's the singer who people would consider the artist, because they put themselves in the forefront. Literally [85] is just as involved, just as passionate, just as inclusive to the dvsn thing. Me and another producer is not just what you would get here. This is dvsn.

Did you have to dial back on your career as an emerging producer to put all your eggs in the dvsn basket?

85: No. I wouldn't say that. I'm always working on both ends of it. As a producer my biggest work has still come out since I was with dvsn. "One Dance" and" For Free." I wouldn't say I've had to really stop or choose.

When do you know you've got a big song? You don't put forth too many tracks either.

Daley: Yeah the first album was 10 songs. We made sure these are the 10 songs that were just totally in love with. The public takes it and receives it as just being a bonus to that. I think with music period we try to fill our projects with records that we feel that way about. We try to make sure that there's not some song on there that we're iffy about.

You guys are seen to be super sexy. You are sex music. Is that a weird thing? What was the intention?

85: It's not weird, we just didn't think it would define us as much as it has. Now people are almost surprised when we show other sides of what we can do. It's like, Whoa we thought you guys only made bedroom music. Even some of the songs on the first project we didn't realize would be taken as sexy.

Daley: It's really about somebody missing another person in the relationship who isn't there. The amount of people that tell me the song is so sexy I realize it's done more than I expected.

Who do you see coming up in the city that you're super impressed by?

85: I'm definitely impressed by Roy [Woods]. I feel like there's so much to him that people haven't seen. Obviously from hanging out with him and being in the studio with him, I know more than the average person, but I feel like when he gets the chance to actually show what he's got he's going to turn a lot of heads.

Daley: There's always new stuff coming out in the streets. There's a new kid named Pyrex I think he just got a situation with Def Jam and he's crazy dope, another young kid named Racks, a lot of new guys that the world is going to hear in a second.

Do you feel responsibility to put people on?

Daley: No, but we're good dudes. If we can help them and we get to actually meet you while knowing there's a vibe there, we have no problem. We vibe with good people.

85: It's not so much putting people on as it is to just work with good people who we really respect.

Daley: At the end of the day I feel like Toronto's surprising us with spitting out talent. Toronto used to have the same kind of syndrome [as New York.] Everyone competing, now everyone is coming up together.

Daley: I think Drake. I think Drake happened and made us all think it could happen. He shone a light on The Weeknd and then PartyNextDoor came. All these other people were like, yo we could do this. The attitude changed from, "You're my competition," to "Yo, what's up?"