Dutch Herring -- A Little Fish That Could

Last week, I got an invitation to taste the New Catch Holland Herring at Russ & Daughters, one my favorite specialty food shops ever, which, lucky for me, is located in my neighborhood on Houston St. I used to be afraid of pickled fish but thankfully I got over it a few years ago, and now am a big fan of rollmops and their friends. Turns out, now is the prime season for this silvery Dutch treat, known as Clupeus among the real herring heads. Niki Russ Ferderman, 4th generation co-owner of R & D (with her cousin Joshua Russ Tupper) and Jen Snow ("she does everything," says Niki.) welcomed me and put my taste buds to work right away. And, into my mouth, I dropped my first Dutch herring head first holding its tail after dousing it with chopped onion as Niki instructed me -- the experience was actually rather sensuous, for real. Nikki added, "It's not everyone's cup of tea."

As The New Yorker writer Oliver Sacks noted in his article after he attended the Russ & Daughters Festival of Herring & Aquavit at Roger Hotel this past June, Dutch herring is the king of all herring and most nutritious -- it has tons of omega-3 oils with none of mercury. I also learned from Jen that between hardcore herring aficionados, "ripping a herring" is akin to the saying, "breaking bread." Cool! I had walked into R&D feeling completely drained from humidity and lack of sleep but after my first ripping I noticed how alert and refreshed I felt. When I relayed this to Niki she told me that I'm not imagining it. "Whenever I feel sluggish throughout the day, I just pop one herring and I'm good to go." This humble little fish is like the green tea of the sea! As I was relishing my new high, Niki reminded me, "We carry this all year around, not just during season!" Who knew that herring could be so exciting! 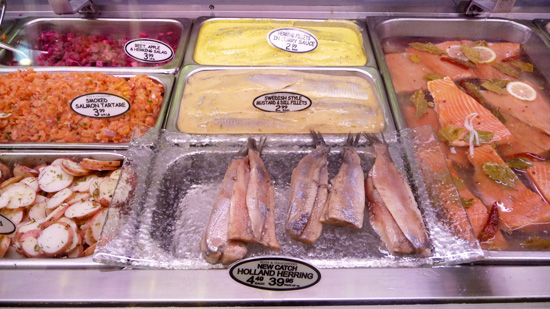 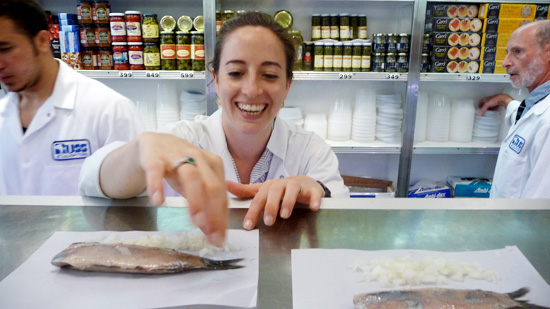 Previous Next
Niki sprinkles chopped onion on the Dutch herring. 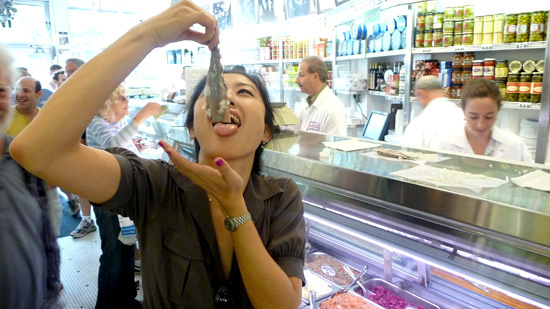 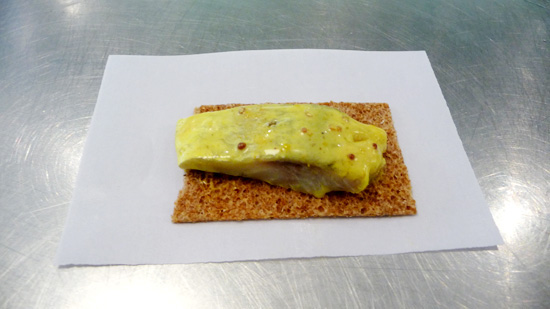 Previous Next
Herring in curry sauce on cracker -- another favorite of mine. 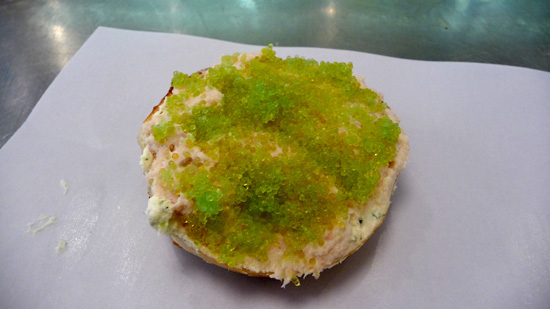