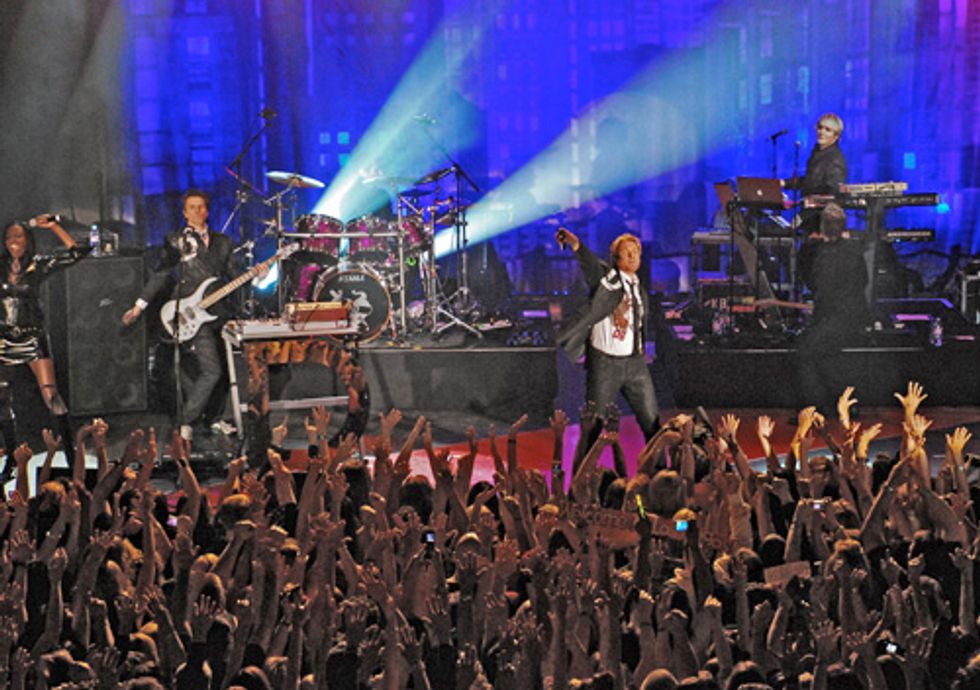 Last fall marked Duran Duranâs Broadway debut. They played two weeks at the Barrymore Theatre in a run-up to the November drop of Red Carpet Massacre (Epic). This Friday and Saturday they roll back into town and roll out the red carpet, if you will, to make their Central Park SummerStage debut alongside opening act Your Vegas.

Save for either a Bush or Clinton being in the White House, a lot changes in 29 years and Duran Duran is without exception. Eighteen years of personnel alterations followed the departures of the three non-related Taylors: Andy (guitar), Roger (drums) and John (bass). John was the last to depart following 1992âs Wedding album which featured the classic âOrdinary Worldâ (a song that then 14-year-old Justin Timberlake adored and would later serve as an inspiration when he recorded Red Carpetâs first single âFalling Downâ). The late â90s found DD distilled to original members, keyboardist Nick Rhodes and lead singer and lyricist Simon LeBon. And in 2004, the band reunited to record and tour with Astronaut, which found the Fab Five back in the hip pocket of pop and riding the airwaves with the hit â(Reach Up For The) Sunrise.â

Eager to keep the momentum, they finished recording a follow up in early â06 called Reportage when Andy Taylor called it quits again. After a good listening, the remaining core four didnât feel they had a lead single. They called in the one producer upon whom all could agree: Timbaland. Although having never worked with a band before, he and his crew along with Timberlake took DD to a new creative high, which resulted in a completely new-sounding, electro-dance-heavy, yet Duranie-approved record. I managed to catch the band at a recent, sold-out show at L.A.âs Nokia Theater for a quick Q&A. 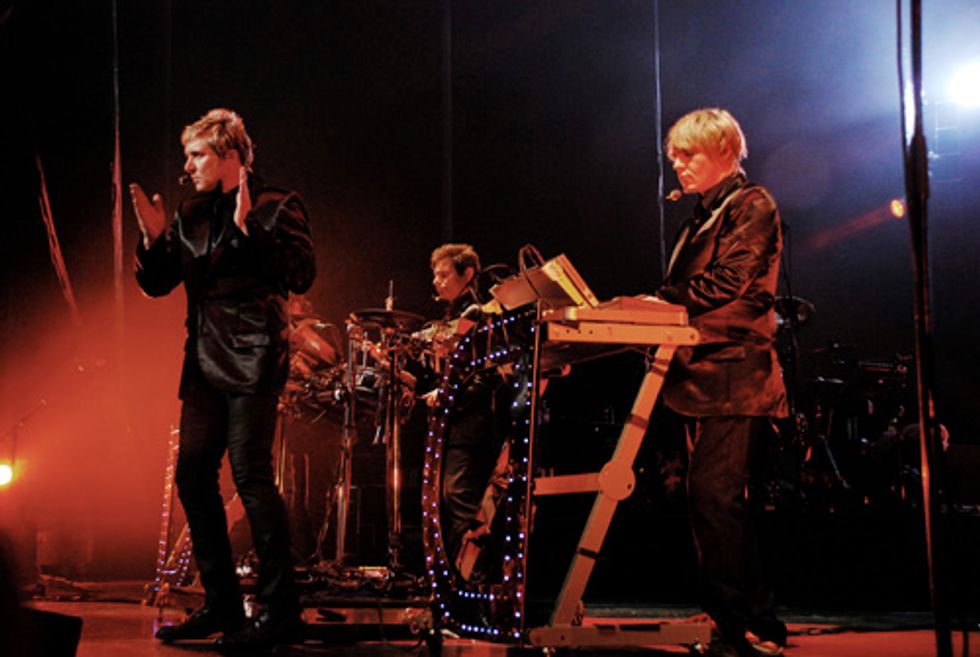 Phil Smrek: This tour takes DD from Japan through North and Central American and ends in Europe. I understand the crowds in Costa Rica were absolutely manic. How do Duran Duranâs U.S. audiences differ from those in other countries?
Simon LeBon: I can tell you what I WANT for our American audiences rather than how they're different -- I hope that soon our American audiences will have a new President, and come November they will.

PS: What was the idea behind the paired down futuristic â80s medley in the second half of the show?
Roger Taylor: Somebody suggested that we do an acoustic medley in the set, and our response was "you have to be kidding.â Our roots are in late â70s early â80s electro so we thought it would be cool to pay homage to our teenage heroes Kraftwerk.

PS: How did working without guitarist Andy Taylor affect the making of Red Carpet Massacre and what did become of all the material that was recorded while he was still with the band?
John Taylor: I don't know what will happen to the material we recorded with Andy before we did the Timbaland sessions -- there was even artwork and a cover ready to go. If it were up to me I would leak it to a bootlegger! However we have a fairly tight hold on it, and I guess we would all like to see it released at some point in some format. We have to resolve our differences with Andy, and then, who knows. Of course the sound changed enormously -- not only did we not have a guitarist in on the writing sessions post-AT, but we had the Timbaland âsound'âin its place, then the Danja âsound.â Right away we knew this was going to be the techno album Duran Duran had been threatening to make for some time.

Phil Smrek: In playing a Broadway stage, Duran Duran has now joined the illustrious ranks of Ethel Merman and Andrew Lloyd Webber; Playbill and all. How did the run on the Great White Way come about and how did it feel to play on a Broadway stage?
Nick Rhodes: It just all seemed so Duran Duran: give us lights, music and high drama and we'll be in the queue! It's something that we had wanted to tick off the list for a while, it was actually a logistical nightmare, but since we had an album called Red Carpet Massacre and the Barrymore Theatre was available and willing, it suddenly made sense last summer. So, by November, our troupe had rehearsed and gathered to grace the same stage where Marlon Brando had performed A Streetcar named Desire and Fred Astaire danced his last dance on Broadway... Almost brought a tear to the eye.

Duran Duran play this Friday and Saturday at 7:30 p.m. at Central Park SummerStage, Rumsey Playfield. Tickets are $65 and available here. 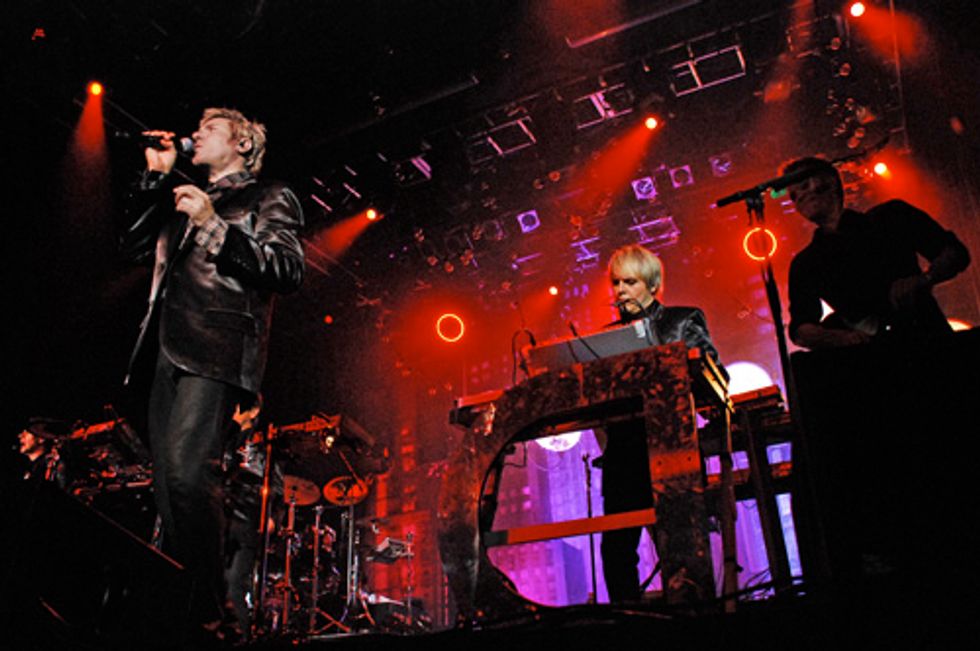 Praise the "Paper Gods," Duran Duran Share The Dramatic "What Are The Chances"