Duffy From the Block

"I'm obsessed with vintage!" Welsh singer Duffy says enthusiastically. "I love to go out and buy a stinking 1940s shirt that's so smelly I can never really wear it, but for some reason it gives me amazing pleasure to know that there's something I own that's 60 years old. It's weird."

In fact, to hear the blond chanteuse say such a thing is not weird at all. From her black-and-white video clip for "Rockferry" featuring her heavily-lined lids and blond bouffant, combined with her earthy Dusty Springfield-esque vocals, the native Welsh-language speaker's preoccupation with all things retro is apparent and has been a part of who she is ever since she was a youngster, according to her charming anecdotes about growing up in small-town Wales.

"I've always been old-fashioned. When I was younger my mum gave me and my sister a fiver each, which was almost as much money as I got for every birthday," she says. "We went 'round Pwllheli, a small town in North Wales, and my sister was in the arcade gambling with her mate, and mum saw them there and walked down the street and looked into this coffee shop and I was sat there with a cashmere cardigan on, in July, with a cup of tea and a scone. I was six years old. She knocked on the window and pointed [at] me as if to say, 'What the hell are you doing?' and I waved, and had cream all over my face. Apparently, I've always been opinionated. I like to do my own thing. I was more into having a scone and a cup of tea at the age of six than gambling and getting wet at the funfair. It's always just the way I've been."

Once named as one of the so-called 'New Amys' (after Amy Winehouse), Duffy's managed to forge her own path, her soulful Sandie Shaw and Lulu-influenced sound being lauded by the likes of BBC TV's Jools Holland, who has had her perform on his Later show no fewer than three times since November 2007. Now with the release of her debut album Rockferry in the U.S., Duffy's set to become as well-known as Winehouse, albeit likely without the tabloid tales.

Born Aimee Anne Duffy to a Welsh father and English mother, Duffy was raised speaking both Welsh and English, being schooled in Welsh until the age of ten when she was moved to an English school after her parents' divorce. "At the time it was really difficult, but it was really important for me to have that education in English because it gave me the skill to write in English. If that had never happened, I would never have been able to do that." Growing up in Nefyn, Wales, a town without a record store, restricted her music knowledge to whatever was on the radio, in Duffy's case, classics station BBC Radio 2. "I grew up listening to classics. Whatever was cutting through from 1950 to 1990 -- Percy Sledge, Walker Brothers, David Bowie, Madonna, Michael Jackson -- it was just classic tracks and I only had a surface view on music. I didn't get any sense of depth, I didn't know artists' record collections, I didn't know the history of soul music and the crossover between gospel, soul and blues to the British music scene. I didn't know anything."

Despite lacking an encyclopedic music knowledge, Duffy spent the years between ages 15 and 18 obsessively creating music and admits she went to great lengths in her efforts to be a success. "I was quite extreme, and in Nefyn if you want to go anywhere, you've got to go on at least three bus rides, so when my mates would be finishing college at 2 o'clock to go and smoke weed, to be really normal and young, I'd be like 'Bye!' and go on three bus rides, get to the studio two hours later, work there all through the night. I always got quite extreme and just wanted to do music."

Through Rough Trade's Jeanette Lee, who later became her manager, Duffy was introduced to ex-Suede guitarist-turned-producer Bernard Butler. The two collaborated on Rockferry, and Duffy found her niche through co-writing with Butler as the pair stayed true to her classic roots in the production process. "I didn't work with people who were avid users of contemporary programming or sampling. They all played instruments and had the same interests and likes as me, so everything on the record is really real. Which lends itself towards that sense of nostalgia."

"I read this quote once," she muses, "from Phil Spector, who said that music is made by lonely people for lonely people. I read it and I thought, 'OK, interesting theory' and [then] I thought, 'but really, if I don't make music that's when I feel lonely.' I'm not a lonely person, but unless I give something like that, then there's a sense of loneliness. I feel like I need to express, I need to do music, I need to feel alive, I need to give and create something." With many songs already written for a Rockferry follow-up, there's one person Duffy has on her collaboration wish-list. "I'd love to get Scott Walker to do some strings on my record. That would be my lifelong dream. That guy doesn't get out of his comfort zone for many people, so I really don't think it's going to happen. I don't think he'd be willing to go back to the early Scott Walker days for a blond kid from Wales." Somehow, we think he just might. 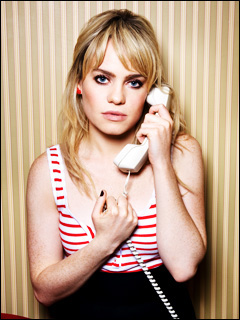