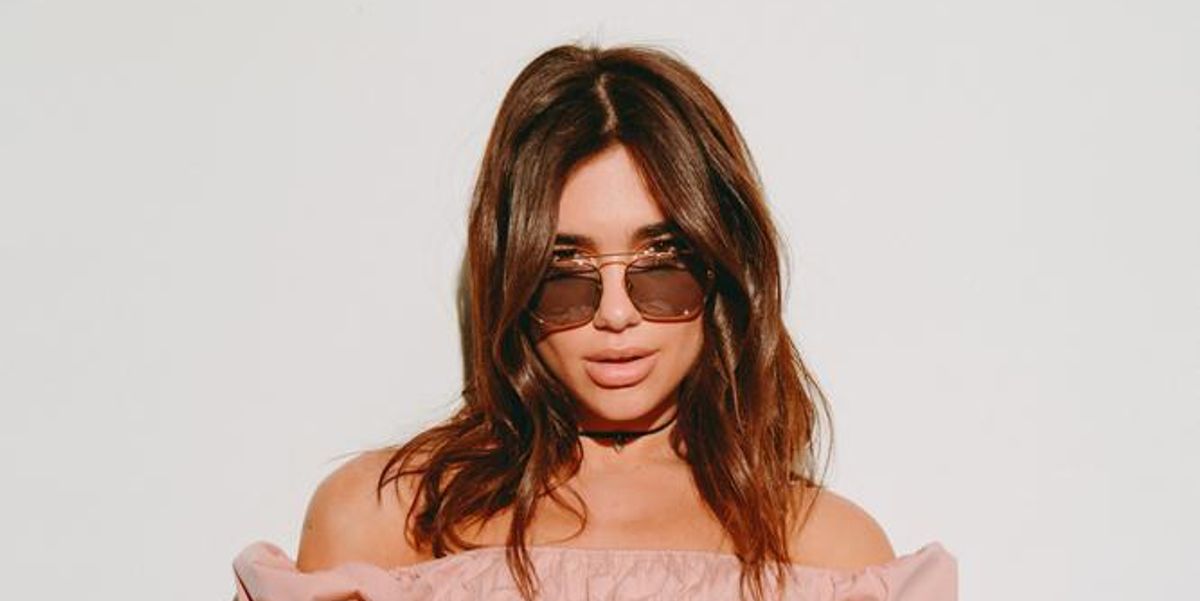 Dua Lipa Is On the Rise

If you're curious what it feels like to watch total strangers do covers of your songs on YouTube when you got your start in the music industry doing covers on YouTube, singer/songwriter Dua Lipa is the woman to talk to. “That was me at some point," she says. “I know exactly what it's like to go and turn that camera on and just do it."

Born to Kosovar-Albanian parents and raised in London and Kosovo, Lipa, 21, stands poised for international stardom, thanks to wildly catchy pop singles that have blown up the charts internationally and racked up millions of views on YouTube. This month, her self-titled debut album finally sees the light of day, after two and a half years of tooling away. And it all came to be thanks to those covers Lipa began posting to YouTube at 14 years old. “I thought, 'I'm gonna show people that I can sing, and maybe someone might find me on YouTube like they did Justin Bieber,'" Lipa says. “It never had that kind of viral effect, but it served me as a form of portfolio."

Having built her audience by posting her own versions of songs by Destiny's Child or Nelly Furtado, Lipa began releasing original music. After one such track, “Be The One," caught the industry's attention in 2015, she secured a record deal and began sorting out what her sound actually was. “It's been a massive learning process for me...I've reverted to calling it 'progressive pop,'" Lipa says of her lush anthems that let her buttery voice take center stage -- as on her first global smash, “Hotter Than Hell."

But as success has come her way, Lipa is first to acknowledge how surreal and lovely it's all been. “Glastonbury Festival has always been my favorite, so when I got to play there that was a massive milestone," she says. “I cried so much afterward, and my mum cried and my best friends cried because it was that thing where we all came last year and I was telling them, 'I swear I'm gonna be on that stage one day.' But never did we think it was gonna be so soon."

How has your time in LA been?

So with the album finally out, how does it feel versus now versus how you envisioned it going in two and a half years ago?

Well, when I first started it was kind of make believe. And it was like, 'Oh I'm working on an album." It felt weird even saying it out loud, especially at that point when I had no music out. People would ask me, 'What do you do?" and I'd be like, “Oh I'm a musician," and they'd say, “Oh, what have you got out?" and I'd be like, “Nothing yet." There was this weird situation. But it's been really magical to have had the opportunity to do this and I feel like I've learned a lot about myself and I've grown a lot. I've written so many songs but the ones I've picked to stay on the album are a lot about love and loss and homesickness and being out and about on the road. I found it easiest to write about the things I know. I've hit so many milestones in my life up to this point and I'm like, “Oh my god, this has been amazing. I can't believe I've had the opportunity."

How did the writing process work over those two years?

It's been a massive learning process for me. I've always written notes and poetry and essays but I never really sat down to write a proper song and it was only when I started writing the album that I really learned from my peers and other songwriters how to build a song. I became more confident in my songwriting but also not being afraid to say what I think and not being afraid to say the wrong thing. I think the second album will be way easier because I know what I like and I know who I like working. I know that the only person who's going to get a good song out of me is myself because if I'm not honest then I'm not gonna get anything.

That does feel like an enormous challenge to put your first body of work out there and not overthink it.

Yeah, you're putting out a lot of personal stories out there, but I've made peace with the fact that some people might know that some songs are written about them [pauses] and they can keep guessing. [Laughs.]

What were the influences for this album as you were putting together that sound?

Well, lots of different artists. Growing up, my dad listened to Sting and The Police and David Bowie and Radiohead and Stereophonics. I always say I love that music because I would sing it in the car with my dad. But I really fell in love with Pink and Nelly Furtado and Destiny's Child and Missy Elliot and Christina Aguilera and that was my thing: pop. I was so obsessed with it. At the age of 11 I moved to Kosovo where my parents are from and everybody there listened to hip hop and my first ever concert was Method Man and Red Man. And then it was 50 Cent and then it was Snoop Dogg and then Busta Rhymes. Literally, that's how it all kind of began. I became obsessed with that and now I love Kendrick Lamar and J. Cole and Schoolboy Q and Chance the Rapper. I think it's just the storytelling that I love. It was trying to put all those different genres into something I identified with, but essentially pop music was the thing I loved and that's what I wanted to make. I've reverted to calling it progressive pop.

Growing up, your dad was a musician in Kosovo. What kind of music did he play?

My dad was the lead singer in a rock band. I never really got to see him at a show until we moved back to Kosovo and he did some shows but he would always sing around the house and was always playing instruments. I would always be surrounded by music and I feel like it was kind of inevitable for me to love music as much as I do. It just felt very normal. I remember being asked, “What's' your earliest memory of music?" and I can't remember because it's always just been very present in my life.

What made you start putting covers of songs on YouTube?

The main reason I started putting covers up online was so I could put it out for my friends to see. It was like, “Ok, I'm gonna show people that I can sing and maybe someone might find me on YouTube like they did Justin Bieber." It never had that kind of viral effect but it served me as a form of portfolio where then I would meet people and be like, “Oh, you should check out my covers and if you like them we should work together." That's how it started. I think it was really just to show persistence and that I was really invested in this -- that this was what I wanted to do.

There's something inherently still new and exciting about talent being discovered in that way.

It's just so important to just be persistent. Just be persistent. For me, I always said that I never had a Plan B because if I ever told myself that I could do something else, I'd always feel like I had something fall back on. So, as long as I kind of set my intentions on what I really wanted and just worked towards that, then I felt like I was gonna get there -- because I can't do anything else! It has to go one way.

After your single “Hotter Than Hell," you were able to start touring. What was that experience like doing those big summer festivals especially?

I love festivals. It's like a big holiday. Glastonbury Festival has always been my favorite, so when I got to play there that was a massive milestone. I was losing my shit. I cried so much afterward and my mum cried and my best friends cried and everyone was crying because it was that thing where we all came last year and and I was telling my friends, 'I swear I'm gonna be on that stage one day.' But never did we think it was gonna be so soon. A lot happens in a year. A lot. And it's just mind-blowing.

To be aware of it and appreciate it is such an important part of the process. It must become whirlwind-y.

It's crazy and I'm trying to get a grasp on reality and I find myself pinching myself very often, but it's such a great feeling. I'm doing everything that I dreamed of doing.

Um, it's really crazy because I put myself in their shoes. You know, that was me at some point. It's really sweet to see people covering my songs and hear their take on it. It's really special actually. And it's really exciting and it makes me feel really happy. I try and retweet or reply or listen to them as much as I can. It feels really nice because I know exactly what it's like to go and turn that camera on and just do it. They could be one of the next new artists.

Get a copy of Dua Lipa's self-titled debut album, out now, HERE