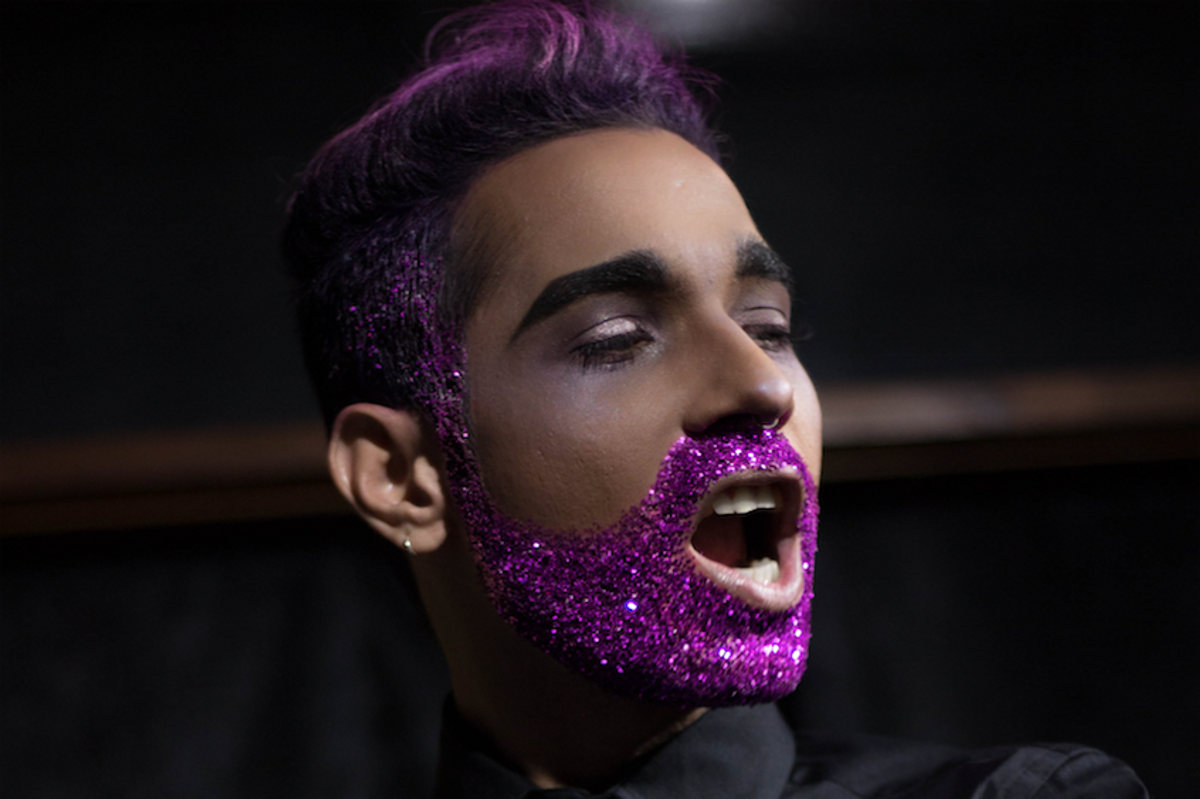 Drag Kings Get Their Due in Puerto Rico's Burgeoning Queer Movement

Growing up in Puerto Rico, Génesis Castro Cruz was teased for their facial hair, for being a girl with "too much of a mustache." Today, at 22 years old, they wholly embrace it: In personifying Molly Jo — a queer drag persona, the embodiment of Castro Cruz at their most extreme — they've come to love the fuzz.

"I just put a little mascara, and it looks beautiful," they laugh.

Molly Jo debuted just over a year ago as a leather-clad werewolf in a Halloween show, and from the start, it was all quite queer. For one, Jo didn't lip sync along to male vocals, instead opting for "You and I" as an homage to Lady Gaga, whose Jo Calderone character at the 2011 VMAs was an inspiration.

That was only two months after the first-ever all drag king show on the island, while the queer drag movement was developing with all-encompassing inclusivity of gender identities, sexualities, body types, and performance styles. The burgeoning scene represents what is truly great about queer drag — that literally anyone is welcome to participate.

At any given event, you might see a cis gay man as a bearded queen in heels, or a cis queer woman donning chest hair and a push-up bra might pull audience members up for one-on-one lap dances. You might see a nonbinary artist engage the crowd in an emotive performance art piece. Blocking brows isn't a given for anyone (though plenty performers do it, and well), and looks run the gamut from avant-garde to casual-cool. Rhinestone-heavy, pageant-style gowns rarely make an appearance.

Originally concentrated around the University of Puerto Rico's flagship campus in Río Piedras (many of the performers are students there), the queer drag scene has since expanded exponentially, and so has the drag king faction within it.

It's important to note that, while likeminded movements in Berlin, Atlanta, New York City, and elsewhere have flourished, sustaining a queer drag scene in a debt-addled island presents its own unique hurdles. The economic recession began a decade before Hurricane María, and has no doubt worsened. And though millennials and younger generations stand as proof of progress, and despite a growing LGTBQIA+ community, politics and social norms on the island tend to be oppressively conservative. (It is a predominantly Catholic society, after all).

Chris Korber, 29, better known onstage as Chris Griandher, has been a major facilitator in the growth of queer drag, and specifically, the drag kings movement.

He was one of the first kings to emerge — simply because he wanted to see drag kings in the queer scene mix, and there weren't any.

With a background in art (he's still currently studying at Puerto Rico's Escuela de Artes Plásticas) that includes performance, Korber began to see Chris Griandher as another way to use his body to deliver messages. But this happened over time, and simultaneously as several sides of Chris Griandher took shape.

Presented under the same name, there's a handful of recurring characters: The Ghoul King, a ghastly Papi Loco who laughs maniacally (a stealthy way to cover up nervousness, Korber divulges); el Fauno, created for a Bacchus themed night; the glammed-up, rock 'n' roll Chris, the original Papi, dressed in leather, leopard print, and a bare chests; and el Viejo Verde, a drunken elder who sells weed and inexplicably carries a baby Jesus.

But at that inaugural performance at Kings of the '90s — an installment of De Show which, at the time, was the only queer drag monthly in Puerto Rico — Korber was overwhelmed. Hosted by Warhola Pop, a queen now relocated to NYC, the lineup featured all king newbies. Nobody had done this before. And hours before the show, Chris Griandher nearly bailed.

"But I just ignored everything. I ran to the little [backstage] space that we had, and I tried not to listen to myself. I started doing the process. I'm like, you're already here, you're already putting the mustache, you're already doing this, so just go with it," he recalls. "The moment I got onstage... everything went away. I didn't feel anything. That was the most surprising part. I think I was smiling the whole time because I was like, I can't believe I don't feel anything, and I'm just having fun. I don't feel nervous... and it was packed! Packed, packed."

Some of the performers that debuted that August 2016 night, like Alex GoZer or Macho Chacón, aren't as active today (because of other commitments, and they're sorely missed). Pó Rodil and Mel Rey, however, are still performing now, albeit at varying frequency and, for Rodil, not strictly in a drag king environment. Mel Rey, Korber says, is now in rotation for any Griandher-produced shindig.

Astrid Moscoso Cardenales missed that first show, but was soon encouraged to get involved by Nomi Latoken, a fluid queen, and Nansi Cótica and Anoma Lía, both queens (and all of them were critical to the foundation of queer drag in Puerto Rico). Her persona, Domme Darko, oscillates between king, faux queen, and burlesque, and sometimes blends qualities of each into a hyper-sexual, genderfluid character.

The 24-year-old's background in theater and love of cosplaying (she models, too) helped her eek into drag performing, first in supporting roles alongside Chris Griandher, then on her own, as a burlesque faux queen for a Nansi Cótica show, then as a king at a cult film themed night, where Domme dragified Ash from Evil Dead. She was at the first-ever Dark Kings event in full king, too. Domme Darko's fluidity, Moscoso Cardenales says, mirrors her own.

"I've always felt that I'm really in the middle of everything, even when I was first discovering my sexuality. I was trying to figure it out because, you know, people say, oh, you're confused, you like one more than the other. I was trying to analyze; what do I like from this, what do I like from that? I'm like, sincerely, this is pretty even," she says. "I can't [choose], same with being more submissive or dominant. I like this from this, I like this from that side; I'm always in the middle ground. Same with gender. I like boy stuff and boy clothes just as much as I like the girl stuff."

While there's plenty mingling with the queer drag scene, there's a particular impact made by allowing for a kings-centric limelight. It's a place for women and nonbinary folks to see themselves represented. Trans men also find a welcoming environment in drag king spaces, Moscoso Cardenales adds.

Two are direct descendents of Chris Griandher: Mel Shagwel, an offspring shared with Anoma Lía, who recently won the Queer Title series hosted at Polo Norte; and Dingo Konpe, who does an incredible version of Walter Mercado, the iconically famous Puerto Rican astrologer.

Dingo Konpé — personified by Orquídea Maldonado, 31 — is another performer with a background in theater. Beyond that interpretation of Mercado, her take on Mr. Trololo as Dingo, replete with a creepily stretched grin (using a mouthguard from the Watch Yo' Mouth board game), is a reliably silly-but-stunning iteration. Dingo dropped into queer drag first at De Show, then settled in as a mainstay performer with Griandher — but, like everyone else, still participates in queer drag events.

"In theater, there's a lot of competition. People are against each other all the time... so they can get ahead. I don't like that," she says. "I like working together. I'm a fan of Chris; there's no reason to compete. Right now, the group of kings we have, I like it because I haven't felt that kind of negative competition. We're all there, and what we want is to deliver a good show."

And there's still plenty room to grow. Korber is gradually expanding the drag king scene to other parts of the island; he's organized several shows already in Ponce, on the southern end, and is hoping the seeds of a brother scene are beginning there with a local king, Chris Piñga. Dingo, Molly, and Domme are on board to help, with the latter performer adding that they're actively trying to recruit more Afro-Latinx performers to ensure a truly diverse group.

"I never even saw myself going on with this," Korber says. "I'm talking about this month, like oh, I have so many shows. It's something that doesn't diminish. I tell Orquí, like, get ready. Because they're going to be wanting you more and more."