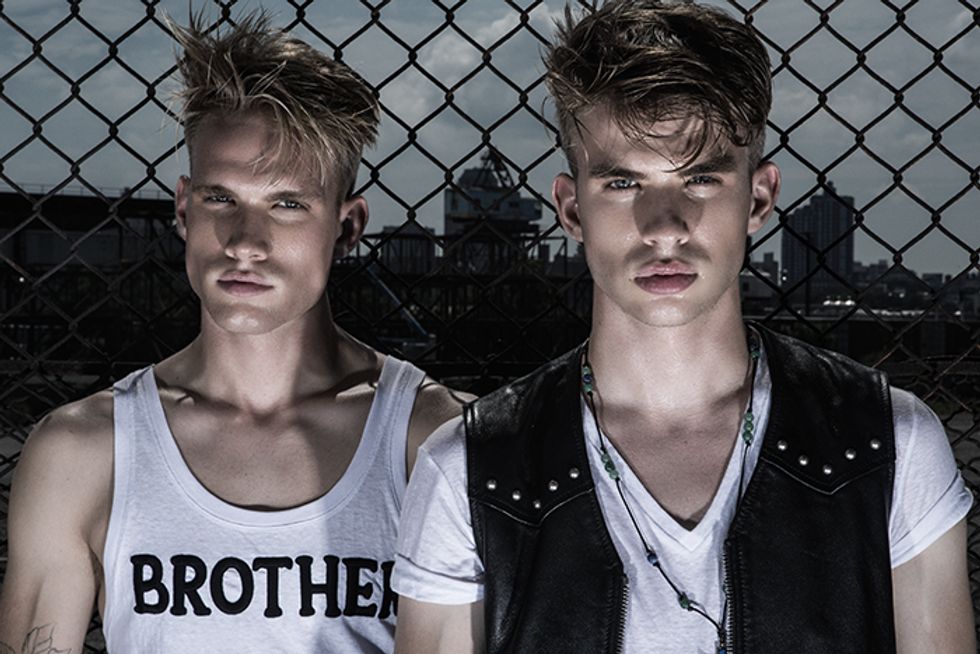 Double Trouble: Talking about the Twin Life with The Rhodes Bros and Dsquared2

By James Rickman / Photography by Vijat Mohindra / Styling by Kevin Breen
PAPERMAG
Take two sets of twins: 19-year-old YouTube stars the Rhodes Bros and Dan and Dean Caten, the identical duo behind Dsquared2. Now dress the former in the latter's fiercest looks and ask both sets all those annoying, irresistible questions about living the twin life. Because that's the luxury of a pair.

What's the best thing about being a twin?

Rhodes Bros: It's kind of like having a built-in best friend. Of course we have our fights, but for the most part we get along really well. And sharing clothes is always a plus.

What's the worst thing about being a twin?

Rhodes: Constantly being compared to one another. As much as we're alike, we also have a lot of differences.

Is there any rivalry between identical and fraternal twins?

Rhodes: Yes, for sure. Fraternal twins are always trying to prove that they're not just friends obsessed with each other, whereas with identical twins people automatically assume they're twins.


Were you dressed alike as kids?

Rhodes: Yes, always, but in opposite colors. Austin in blue and Aaron in red.

Have you ever dated the same guy?

Rhodes: No way. We have complete opposite types.

What's your favorite set of twins from history or pop culture?

Rhodes: Mary-Kate and Ashley. We were obsessed with them growing up and love what they've done with their careers together.

Are there particular challenges to being twins who are gay?

Rhodes: Sometimes people are shocked and ask a lot of questions, but other than that not really. We just both really like boys.

What first drew you to sharing your lives on YouTube?

Rhodes: We wanted to show people back home what we were up to. Also, it just gave us a direction and something to focus on.

Having come out to your dad on YouTube, is anything too personal to put on your channel?

Rhodes: We're definitely still trying to figure that one out.

What are your favorite and least fashion brands?

Rhodes: We just like to keep it really simple. Topman or AllSaints is always our go-to. And of course Dsquared2!

Which member of One Direction would you make out with?


How do we tell you apart?

Dsquared2: Dean is skinnier and Dan more muscular. Dan has a tattoo on his chest and Dean has nothing like that. Honestly, the differences rely more on the behavioral aspects.

What's the best thing about being an identical twin?

Dsquared2: There's a person who completes you; he understands deeply your limits and strengths; he knows everything about you; there's a special connection that no one can really understand. We also work together and definitely our bond is our benefit. Two people, one mind.

Dsquared2: Yes we do. We are perfectly in tune and we anticipate or perceive the other's thoughts. It is a matter of special feelings we get; it is difficult to explain.

Were you dressed alike as kids?

Dsquared2: We used to wear casual stuff but never jeans. Our father did not want that because he considered jeans to be clothes for poor people. But you know what? We have always wished to wear them.

Dsquared2: Of course Dean and Dan Caten. Do you know them? ;)

Your shows, muses and collections are the stuff of legend. Name a few personal highlights from 20 years of Dsquared2.

Dsquared2: Collaborating right from the beginning with superstars like Naomi Campbell and Madonna are certainly experiences to remember. In the past 20 years we have expanded our brand from mens- to womenswear, bags, accessories, perfumes, children, swimwear. We are proud to have the Dsquared2 philosophy as a complete life brand. Our retail store expansion is also a great personal highlight! We have numerous stores in Asia and have fully launched in the USA and London this year. It's been 20 years of unforgettable working and personal experiences.

How has the luxury market changed since you got into the game?

Dsquared2: High-street fashion and culture has completely fused with high-fashion luxury. Fast fashion is now competing on the forefront with high fashion! The important thing is to invest in key quality items like a great leather jacket, tailored suit or women's handbag that you can mix with street fashion. Real luxury now is also about having a custom-made experience that mixes fashion and lifestyle all in one.

What is your definition of luxury in 2015?

Dsquared2: Luxury is for the few. It is all about being essential and elegant. But it also concerns the proper attitude more than the material stuff you can own. It is not something to show off, but something more natural, innate. It is a refined and careful sense of style.

Dsquared2 draws a lot of influence from street style and pop culture. How does that fit into your idea of luxury?

Dsquared2: Luxury is not such a restricted concept. All of our collections are inspired by the world of art, music and pop culture in general. We also love to travel and we are constantly influenced by the different experiences around us.

How would you describe a Dsquared2 woman?

Dsquared2: The typical Dsquared2 woman is glamorous and sexy, the perfect combination. She dares and she is never predictable. We can say more: shameless but with impeccable style!

What about the ideal Dsquared2 man -- ripped? Rail-thin? Puppy dog-eyed?

Dsquared2: The Dsquared2 man is definitely self-confident and positive. It is not about a particular physique but about having the right confident attitude. Basically, the ideal man is the one who is not afraid to mix and match casual and elegant items and wear them with personality.

Which country has the sexiest men?

Dsquared2: Italy! But you know, beauties are everywhere.
You May Also Like
Famous People