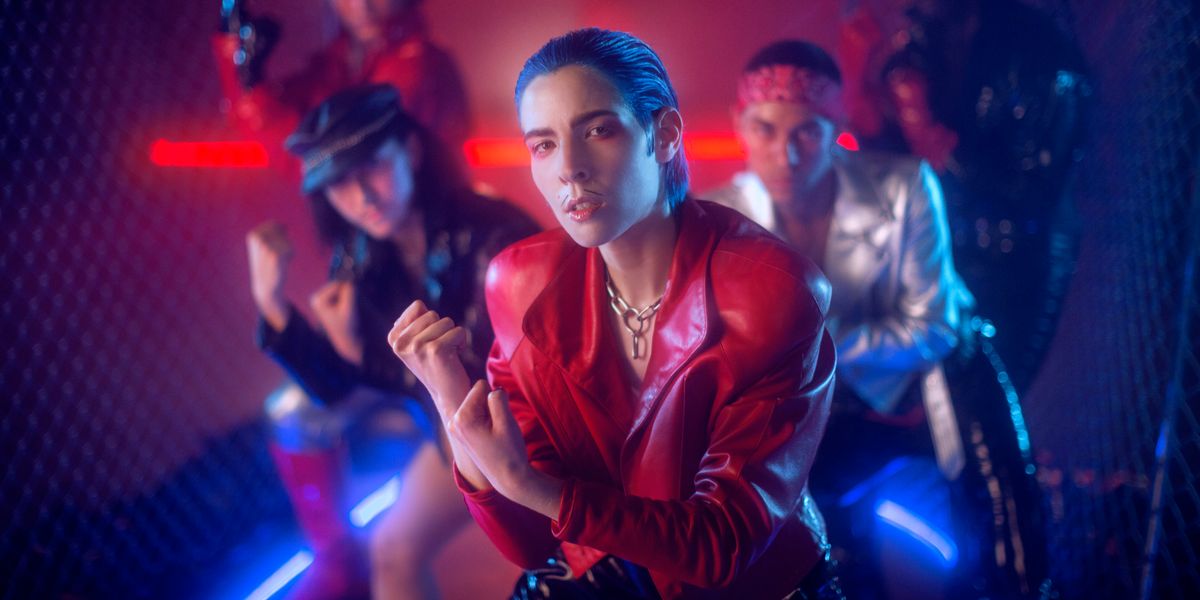 Dorian Electra Squares Up in 'Man to Man'

In what has quickly turned into a breakout year for the performer, Dorian Electra is continuing to top themselves with each subsequent release. Riding high off their Charli XCX collaboration "Femmebot," Electra went on to up the ante with the corporate S&M anthem, "Career Boy," and interrogated social hierarchies and dynamics of nightclub life on "VIP." Consistently crafting visually enticing videos that use humor to point out the absurdities of the structures they critique, this year Electra has fully emerged as a distinctive creative voice unlike any other artist in their field.

Their latest single, "Man to Man," sees Electra tackling toxic masculinity head on. Who better to critique traditional gender norms than a genderfluid pop star? With tightly choreographed dance battles and homoerotic boxing matches, "Man to Man" is easily one of Electra's most elaborate videos to date. Paying incredible attention to detail and continuity, Electra bounces between playing a matador or a sword-wielding knight with a puffed-up chest and copious amounts of machismo.

What Electra zeroes in on in "Man to Man" is the way toxic masculinity by nature pits men against one another. A perpetual battle to prove who is manlier that inexplicably can only be resolved through physical displays of strength. Electra exposes the inherent hierarchies that this system creates and reveals them for the posturing displays of bravado that they actually are. A chorus of "are you man enough to soften up?" subverts the implicit questioning of toughness by imploring the listener to be vulnerable.

Not content to just simply satirize the toxic elements, Electra actually sees something worth saving in masculinity. Through their repeated subversions of the norm they build, brick by brick, a better, more inclusive definition of masculinity to replace its current self-destructive connotations.

We caught up with Dorian Electra ahead of the release of "Man to Man" to talk about how the whole thing came together:

What was the inspiration for "Man to Man?"

My partner Weston Allen (who directed the video with me and edited it) originally suggested the phrase "Man to Man" to me after we were looking through a thesaurus, brainstorming potential song titles before I went to the studio one day with Eric (Social Chair). We were really into the all the potential for multiple meanings that "Man to Man" had. 1. Two men talking face to face in an open, honest, and direct way. 2. man to man as a defensive strategy in sports, reminiscent of hand-to-hand combat in warfare, no weapons, just bodies. and finally 3. Man-to-man in a romantic way, like one-on-one or man-ON-man in a sexual way. The phrase immediately provided so much inspiration and sounded so catchy that it made perfect sense for a song.

How did you go about translating that into the video for "Man to Man?"

From the time that Social Chair and I began working on the song, I always envisioned some kind of choreographed fight/dance scene in a super stylized "parking lot"/industrial set. I also envisioned red and blue as the palette from the beginning too for some reason! Ironstone brought this to life with his choreography, Mood Killer with their set design, and my partner Weston Allen who directed it with me.

You've always used your music to tackle toxic elements of cis-normative culture, what did you look to take on here?

In a very personal way, I wanted to express a part of my own identity. I wanted to show myself as a man, fighting with other "men," and kissing another man. Especially for people that might have before perceived or referred me only as "a woman," I wanted to put them into the world that I see myself in and by watching the video, understand why my character kissing a man in that moment is important. It's kind of complicated to talk about sometimes! haha - especially being gender fluid, where it's not like I'm saying "I am 100% a man" or "I am 100% a woman" - so I feel like it can come off as wishy-washy when I talk about it, but really it's because that's how I feel about my gender, that it's not binary, and constantly changing and evolving, just like every other part of my self.

In what ways does "Man to Man" subvert or address toxic masculinity?

I wanted to have fun playing with the homoerotic undertones often present in violence and the glamorization of aggression. That in a lot of ways, the only form of physical contact that our culture encourages between men is physical violence, and physical intimacy is looked down upon as soft or purely homosexual.

Do you remember encountering a lot of toxic norms growing up?

I was super lucky to grow up in a really supportive family with parents who both defied gender norms in their own way and always encouraged me to be myself even if that meant being a little weird. My dad had his ears pierced and wore rhinestone reading glasses and always sang (and still does to this day) Madonna songs at karaoke. After my parents divorced (they remained friends) my mom began openly dating women who also became a big part of my life. So even though I have, like most people, experienced the negative effects of toxic masculinity, I just wanted to take a minute to highlight something positive, because I feel like that kind of experience is sadly more rare!

How would you redefine masculinity?

I would like to redefine it to mean being courageous enough to be open, honest, direct, empathetic, kind, and sensitive to others.

What was the most fun aspect of filming this video? What proved to be more difficult than you might have anticipated?

I loved doing the choreo and also smashing the bust over the knights head and getting smashed over the head with the vase! Also I loved being able to be shirtless on camera with a flat "man's" chest! That was really liberating and fun. I was actually so nervous about the kiss between me and Julian Taylor! I had kissed people on stage before in theatre school, but with the camera being so close up, I was worried I was going to make it look awkward!

What's next for Dorian Electra?