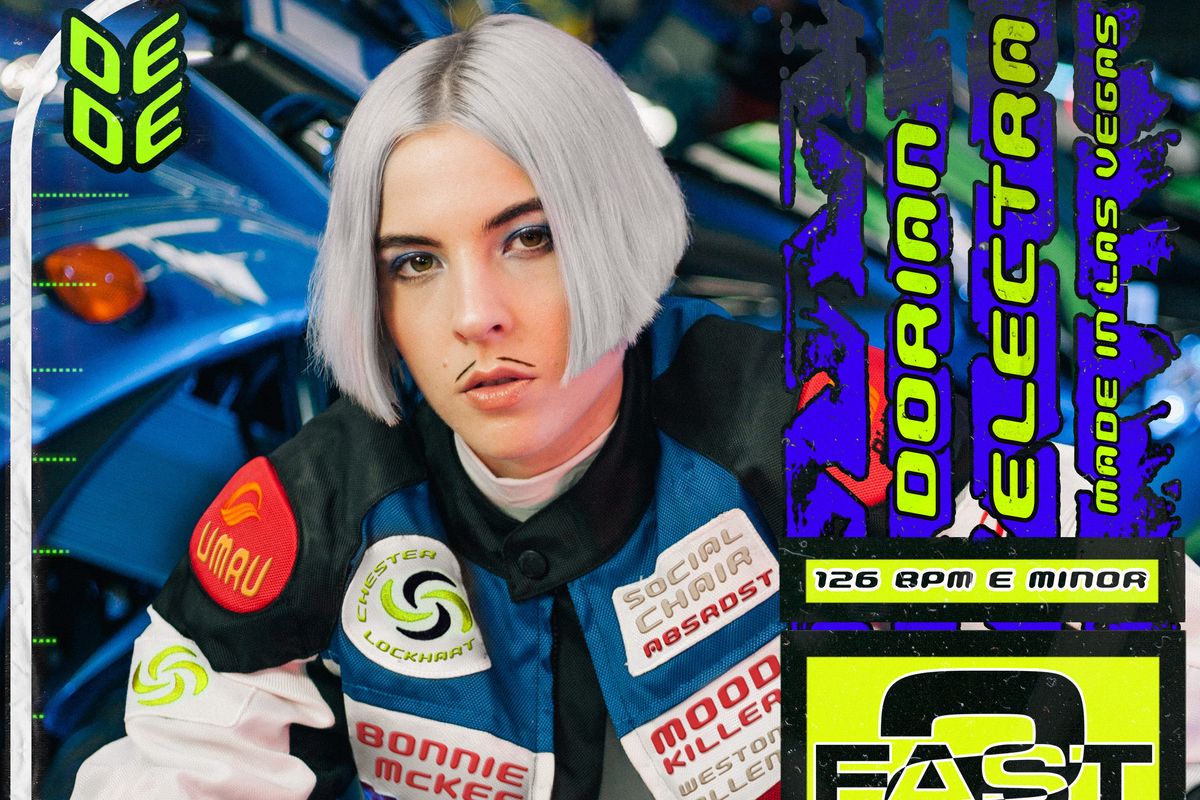 With each new single, from "Man to Man," to "VIP" to "Career Boy," Dorian Electra proves more firmly that their signature self-aware mix of hyper-artificial radio pop and campy satire is way more than a performance art quip or material for a wild music video. It's an interrogation of pop itself, a realm that Electra is quickly infiltrating (also, it slaps).

But Electra isn't interested in using their unique style to get inside the pop world and become another cyborg pop queen (no shade, of course, to cyborg pop queens). They want to shake things up, in all kinds of ways.

Electra's latest new single, "2 Fast," which PAPER shares today, is slick and infectious, as per usual. The twist? It was co-written by a random group of commenters on Instagram Live. Off the bat, this sounds like an empty, if amusing, techy gimmick. But Electra was willing to try it out anyway, to see if it might provide a way of democratizing the songwriting process, and mining social media's collective creativity.

"Artists are often pretty secretive about being in the studio, not wanting to show unfinished ideas, wanting things to be a surprise or even not wanting people to 'steal' their ideas(?!), but I know how much I enjoy seeing snippets of my favorite artists in the studio and learning about their creative process so I thought it would be really fun to share that people and get them involved in the process," they explain.

Electra live-streamed a songwriting session with their steadfast gang left-field pop upstarts, including Bonnie McKee, Mood Killer, Dylan Brady, Social Chair, ABSRDST, umru, Weston Allen, Chester Lockhart, Jesse Saint John. Over the feed, Electra and their gang broadcast questions to their followers, like what BPM to use, what note to start on, and what the lyrics should be. Fans dropped suggestions into the chat, and responded with feedback as Electra would try out their ideas. Fans also thought up the title, the Nascar theme, and created the album art (which was submitted by @GlitchMood).

If you watch the livestream highlights, compiled in the YouTube clip below, you can watch in real time how the commentators built off each other, and, guided by the experienced songwriters, generated the material to build a cohesive song.

"It was a completely new writing process that I completely dug" says Mood Killer, one of the songwriters in the room and a rising alt-pop star in his own right. "It was like we had a cache of imagery and wordplay that we could then twist into some instantly iconic lines... It was kind of a puzzle connecting the dots between the amazing ideas the fans generated. It was just a free-form creative party, the perfect atmosphere for this kind of experiment. And the perfect representation of the week we had just had doing the album! We went in totally unsure of if this songwriting live stream idea would work at all and wound up with an entire song in just a couple hours! It's all a testament to Dorian's infectious creative spirit and the community I'm lucky to be a part of! This time we TRULY couldn't do it without the Stans!"

The experiment is a celebration of collaboration which — although it was hyperbole — more accurately reflects how great pop songs are really written: in crowded, laughter-filled rooms of creatives, rather than by one genius. The credits feature a mile-long list of Instagram handles (209 people to be exact). This is because Electra was committed to crediting everyone who participated — not just those whose ideas were used in the final cut, but also those who chimed in with feedback, questions and jokes, creating the collaborative atmosphere and pushing the conversation along.

"I think that opening up and collaborating with literally hundreds of songwriters in one session was a really valuable exercise for letting go control of the creative process in a super extreme way and putting the fate of the song pretty much entirely in other people's hands" says Electra. "Originally, I thought the session would be super chaotic and nuts, but all the talented folks in the room expertly reigned it in and I think the song turned out great!"

McKee adds, "The idea of writing a song LIVE and participating with an interactive audience is a risky one — the pressure is on and the clock is ticking. But after working with Dorian and their uber talented team all week, I knew there was enough talent in the room to pull it off! It was such a fun collaborative experience! I loved the challenge of incorporating the viewer's lyrics on the spot — and the song turned out to be a real bop!"

From the project pitch, it sounds like "2 Fast" might have been an absolute mess at worst, and at best, a passable song and a nice symbol of progressive creative ideals. However, the session yielded a tight, clean pop song that happens to be one of the best showcases of Electra's vocals yet, and that, if you watch the livestream, you can see how it came together from hundreds of people's ideas.

To be fair to those who'd try this at home, Electra's Instagram followers might be a little bit exceptional: "A cool part of this is that a lot of my followers are artists and musicians too so it was awesome have a chance to collaborate with a bunch of them for the first time" they say. But, if nothing else, the club-ready final product proves there's so much more to explore with the method.

Listen "2 Fast" and watch out for more crowdsourced material from Dorian: "I definitely want to do this again."