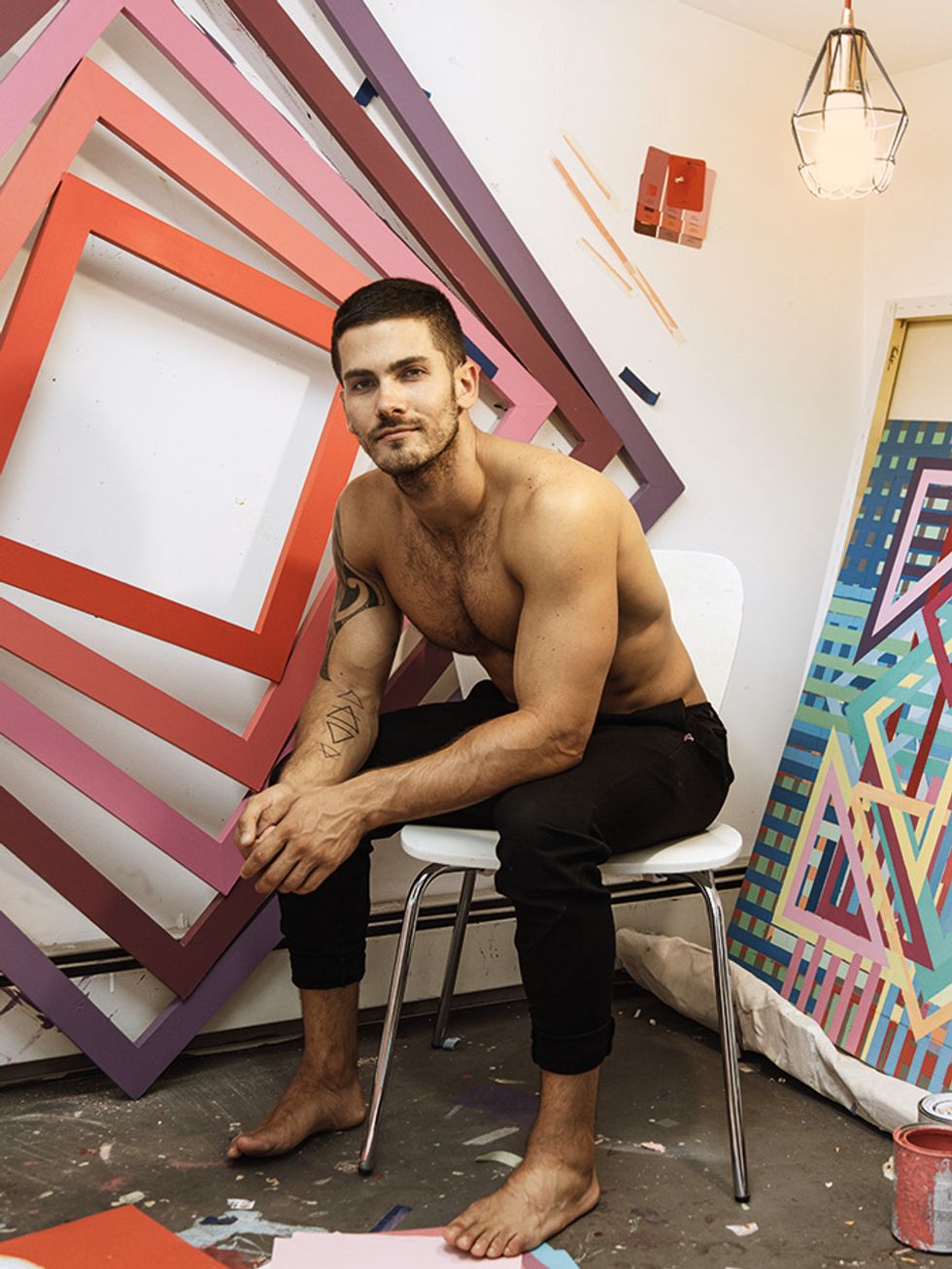 text by Khalid El Khatib / photo by Rodolfo Martinez
PAPERMAG
If you came across Louisiana-born, New York-based artist Edward Granger, 26, standing next to one of his murals or installations you wouldn't know where to look first. His art, obsessively stenciled geometric patterns in pastels and neon, is a sharp contrast from a city obsessed with black. But that's not all that sets him apart. He's also hot. The gay, former swimsuit model has the smoldering eyes and effortless grin of a guy who'd break your heart in high school. And he's not afraid to use his looks and charm to advance his career.

He sees himself as a new breed of artist: one that's playing the role of creator and promoter. Social media, especially Instagram where Granger boasts over 50,000 followers, is helping him have it all. From his unfinished work to his worked-out chest, his self-proclaimed transparency is getting him noticed in big ways: He recently completed a window installation for the HermÃ¨s flagship in New York (naturally, they reached out over the app). Instagram messages -- partnership inquiries, dates, dick pics, and purchase orders from collectors -- come in almost daily; he rejects the stodgy notion that art needs to stay in the gallery or it's selling out. All the while, he's careful to distinguish between himself and the many other "Instastuds" with thousands of followers. "I'm not comfortable with the 'me, me, me' vibe," he says. And through conversation its clear the way he thinks and operates is much more 'art, me, art.'

Let's start with a serious art question. You studied architecture -- why'd you become an artist?

My being an artist branches out into everything. An architect is an artist. Creativity is lawlessness and anarchy -- that's my thing. In architecture school I was super conceptual and actually working in that space; taking the authority of someone else was something I wasn't going to accept. I started working at an architecture firm and it was so buttoned up. Someone was telling me how to be creative and I didn't like that. But I do utilize a lot of my architecture knowledge in my work. Architectural objects become visual references for me. The geometry -- everything relates back to it.

You're from New Orleans but your work reminds me more of Malibu. How have your roots influenced what you paint?

Maybe I'll move to LA eventually. When I lived in New Orleans my work was more organic and fluid. New Orleans has this soul and the weight of everything that's happened there. Here [in New York], my work has changed to be more structured. But it's good; my work has found its shape here because I have, too.

But you just said that creativity is about lawlessness and chaos -- has New York held you back in any way?

I've had moments where I've had no money to buy art supplies and you get creative and find ways to do it. Sure, NYC has held me back but in more ways, it's pushed me forward. Earlier this year, things dropped off and I wondered if I'd have to move back home. I thought, maybe I should become a SoulCycle instructor? I was ready to sell my studio and give it all up -- and then I was like, are you fucking stupid? Would you give up everything you've worked for your whole life? Now it's good again and I know if it gets to a bad point, I won't give it up. I don't know what else to do in life.

Whether it's your Instagram or popping up at a gallery opening or NYFW party, you put yourself out there. You hustle.

I'm so sick of artists hiding behind their art. Gallery owners and curators have been standing in the way of artists' self-promotion because they don't want to become obsolete. I do put myself out there. I try to do it all. From [installations in] the offices of The Wrap to Hermes, I've always wanted to collaborate with brands. The gallery thing is what people have been doing forever.

Let's talk about Instagram. How many paintings have you sold from it?

A lot, maybe 20 in four years. Sight unseen -- people just buy them. Two last week, a few thousand dollars total. One time I sold one for $12,000 sight unseen. I got all the profit.

And how many dates? I've seen the pics you get.

Two. I've said I'm shameless, but I can definitely be turned off by shamelessness. People on Instagram are pushy.

Maybe because there aren't the same consequences of rejection. What's a really weird message you've gotten?

Offers for free framing! Also, a lot of messages from people telling me someone is using my pictures.

You get the catfish warnings a lot?

What is your Instagram style? How does it relate to your art?

I have a way of filtering my pictures like I do my art -- same colors, a little washed out, contrast taken out. My Instagram ratio is 80% art, 20% me and my life and my friends. I really have to like you to put you on my Instagram. A lot of people ask me to post them. But really I try to keep it cool, relate it all to urban life in NYC and the charisma of this boy from the South. I don't think of my Instagram as a high-stakes, nail-biting thing. It can be fun, and I can post a selfie now and then.

Where would you be without it?

When kids are born into a world of iPhones they don't know what it's like without it. I mean, my career wouldn't have taken off like it did. But I'm a really gregarious person on the exterior -- I know how to network myself. Instagram has accelerated everything but I don't rely on it.

Do you think being sexy on Instagram prevents people from taking you seriously? Are people like "he's successful because he's hot?"

They say it. But I would never get in a speedo in front of it or gather a gaggle of gays and I don't take selfies in front of my art all the time. I won't promote my art in the same way that a lot of other people do on Instagram.

So you're not big on being one of those "Instastuds"?

I definitely separate myself from that group. There are so many more aspects to who I am. I hate when people only want to talk to me about what I look like. It starts to dilute who you are, and it upsets me that it's so widely accepted.

There will always be debate over how a platform like Instagram and its noise devalues your work, but HermÃ¨s is validation that I think anyone would have trouble arguing against. How did the HermÃ¨s installation impact you?

It was huge. The window had my name in it and everyone was tagging me. I now have a hashtag with Hermes. That's crazy. It also created new dreams and aspirations. I want to do sets for runways. There's a lot of money there but also openness for creativity that isn't utilized now.

How has fashion influenced your work?

Art and fashion and architecture have the same DNA. With clothing there are proportions, the way it fits, the form. A lot of my work is about proportions and how do I see people within it. Fashion is always looking at how to be different, and that is what I want to do with my work.

If your art was a fashion label, what would it be?

HermÃ¨s. It happened. Valentino has done a lot with color, they use a lot of the geometry. Bottega Veneta.

Have you always loved fashion?

Yeah, when I was in high school I worked as a lifeguard and pretzel maker at Auntie Anne's -- I've always been dexterous. I would save my money to buy Alexander Wang.

What do you want to do next?

My dream is to be an artist like James Turrell who transformed the inside of LACMA. I want to start moving into large scale. I'm actually moving into a bigger studio to make bigger work. Size matters! But what I want still changes all the time. When I was in college, I studied architecture. I wanted to do a big visual installation for a store. With HermÃ¨s, I did it.

No! But things are happening ahead of me even knowing I want them. Awesome things are coming my way. And I'm going to keep going.