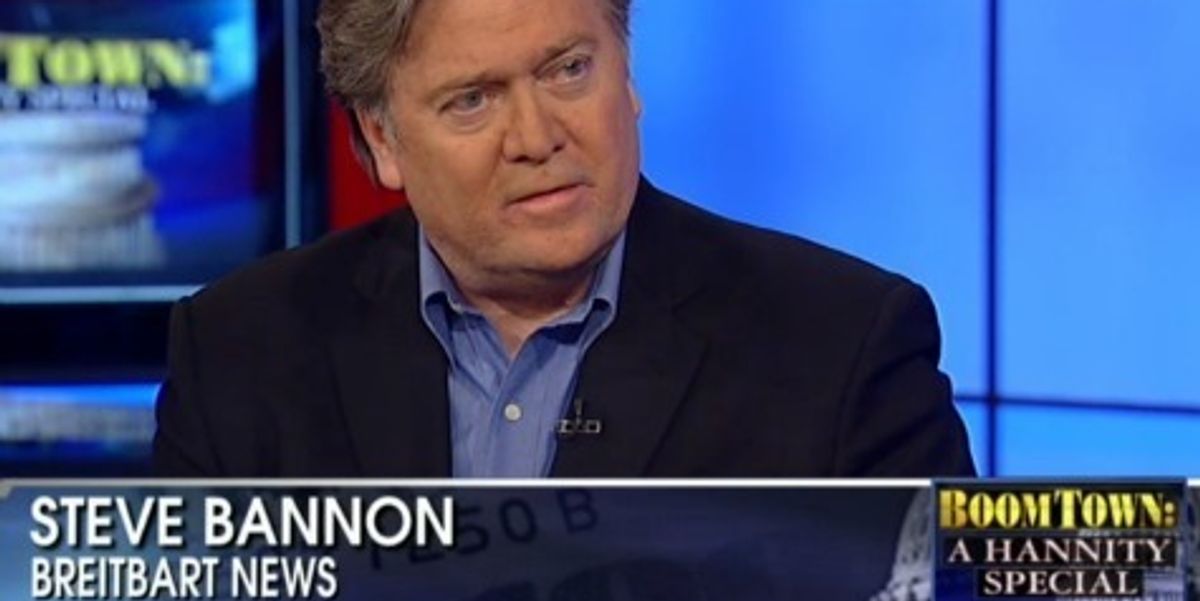 Back before Stephen Bannon was the "CEO" of Donald Trump's presidential campaign, or even the executive chairman of the conservative Breitbart News outlet, he was an aspiring Hollywood filmmaker. And recently, it's been revealed that at one point of his illustrious career, he wrote a rap musical set in South Central during the 1992 LA Riots.

Speaking to Bannon's former writing partner Julia Jones, The Daily Beast found out that the screenplay, dubbed The Thing I Am, was based on Shakespeare's Coriolanus and includes raps written by Jones and the son of Bannon's assistant, Wendy Colbert.

"Steve [then] added stuff—all the 'dudes' are him," Jones said. "It's not strictly rap. It's more Shakespeare in rap [music]."

She also shared an invitation for the staged reading they held, which reads, "the adaptation will shed light on the continuing subversive effects of racial abuse going back centuries—from the mines of Apartheid in South Africa...to gang cultures and the growing disregard for the disadvantaged in society today. It will show how the culture of greed, elitism, discrimination and inhumanity repeats itself today in a self-defeating replay of atrocities…" Which sounds pretty counter to what Breitbart and Bannon would later stand for, but, okay.

To top it all off, The Daily Beast managed to include this summarized section of the script, which stars a tribune named Brutus and "Agrippa, 'Mack Daddy' of South Central, an ORIGINAL GANGSTA (O.G.) upper-echelon Blood". Quite the upgrade from being a mere Roman senator in Shakespeare's original, huh?

"South Central is the belly, you, niggas, its mutinous members; look on and you'll see that the benefits which you receive proceed… from them to you. In no way from your sorry black asses," Agrippa retorts.
According to the unproduced script, the Blood subsequently "crosses to Brutus and grabs his crotch."
"Hey, motherfucker, YOU—what you think—YOU—as the great dick of this… assembly?" Agrippa asks.
"Did you call me…" Brutus replies.
"A dick," Agrippa says, cutting him off, "in his face."
"You motherfucker…" Brutus responds.
Agrippa grasps at Brutus's penis, one extra time.