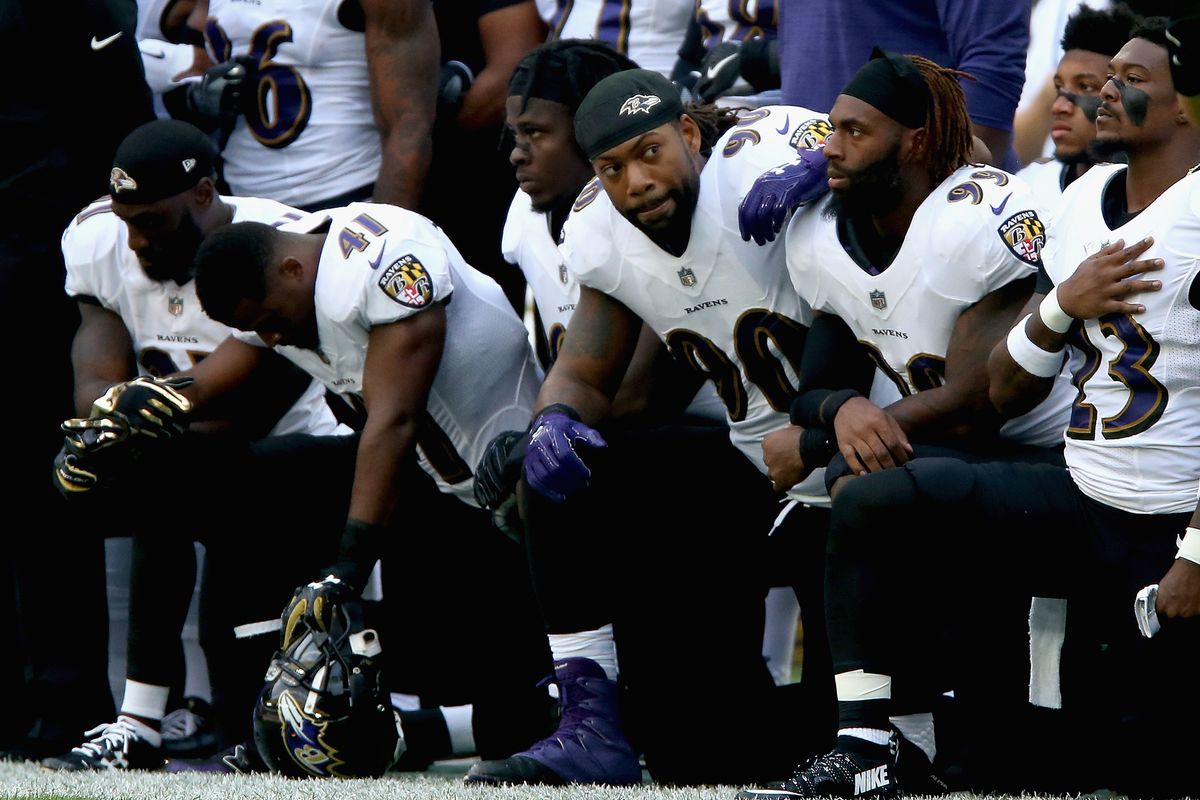 Over the weekend, rather than issue a statement about the on-going destruction caused by Hurricane Maria to Puerto Rico or work toward a diplomatic solution to threats of nuclear war from North Korea, President Trump took the time to criticize former San Francisco 49ers quarterback and private citizen Colin Kaepernick for kneeling during the National Anthem as a silent protest against police brutality against people of color in America, indirectly calling him a "son of a bitch" at a rally. Trump also denigrated the NFL in general for working toward minimizing head injuries among players, encouraging fans to boycott games, and also uninvited Golden State Warriors' star player Steph Curry from the White House.

Though the response to Trump's comments were inevitably swift and numerous, they were perhaps not what the commander-in-chief of the armed forces was expecting. From Lebron James to WWII vets, people called out the president's remarks:

U bum @StephenCurry30 already said he ain't going! So therefore ain't no invite. Going to White House was a great honor until you showed up!
— LeBron James (@KingJames) September 23, 2017

With everything that's going on in our country, why are YOU focused on who's kneeling and visiting the White House??? #StayInYoLane
— Chris Paul (@CP3) September 23, 2017

If you think I joined the #USNavy so NFL football players can kneel in protest of racial injustice, you would be correct. #TakeTheKnee
— Jeff Dyche (@dychejs) September 24, 2017

I wish that all of the mothers of those kneeling NFL players would show up at the WH and ask Trump, "Who you calling a bitch?"
— Official Wanda Sykes (@iamwandasykes) September 24, 2017

Since “disrespecting the flag" is still the narrative being used, this courtesy of the US Flag Code Chapter 10: Respect for flag

My grandpa is a 97 year-old WWII vet & Missouri farmer who wanted to join w/ those who #TakeaKnee: "those kids have every right to protest." pic.twitter.com/LurCj7SLUB
— Brennan Gilmore (@brennanmgilmore) September 24, 2017

Trump doubled down on his comments on Saturday via his favorite medium.

If a player wants the privilege of making millions of dollars in the NFL,or other leagues, he or she should not be allowed to disrespect....
— Donald J. Trump (@realDonaldTrump) September 23, 2017

...our Great American Flag (or Country) and should stand for the National Anthem. If not, YOU'RE FIRED. Find something else to do!
— Donald J. Trump (@realDonaldTrump) September 23, 2017

He also formally uninvited Steph Curry, who has been a vocal critic of the Trump administration, to the White House.

Going to the White House is considered a great honor for a championship team.Stephen Curry is hesitating,therefore invitation is withdrawn!
— Donald J. Trump (@realDonaldTrump) September 23, 2017

To which the Golden State Warriors announced that the whole team would not be visiting the White House:

JUST IN: Golden State Warriors announce they will not visit the White House: "President Trump has made it clear that we are not invited" pic.twitter.com/E56vo6aFIs
— NBC News (@NBCNews) September 23, 2017

This spawned its own slew of memes, tweets and takes, and led to the Mayor of Washington D.C. to extend a personal invite to the Warriors:

Given that there were several major NFL games yesterday, anticipation of who would protest and how was high. NFL Commissioner Roger Goodell released a statement calling Trump's statements divisive:

"The NFL and our players are at our best when we help create a sense of unity in our country and our culture. There is no better example than the amazing response from our clubs and players to the terrible natural disasters we've experienced over the last month. Divisive comments like these demonstrate an unfortunate lack of respect for the NFL, our great game and all of our players, and a failure to understand the overwhelming force for good our clubs and players represent in our communities."

NFL team owners weighed in as well, with most releasing strong statements against Trump, who once tried to buy the Buffalo Bills but was denied by the other owners.

The New York Giants owners called Trump's comments "inappropriate." Miami Dolphins owner Stephen Ross said the country needed "unifying leadership right now, not more divisiveness." He added, "I know our players who kneeled for the anthem and these are smart young men of character who want to make our world a better place for everyone." 49ers owner Jed York said the comments were "callous and offensive" and "contradictory to what this great country stands for." Even the New England Patriots' owner Robert Kraft, a friend of Trump's, said he was "deeply disappointed" by the tone of Trump's comments.

During Sunday's games, around 150 NFL players took a knee or took other forms of protest in solidarity with Kaepernick. Three teams decided to remain in the locker room until the anthem was finished, and many players - most of whom were black - knelt, sat or raised a fist in the air during the anthem.

Among those who remained standing while the anthem played, many locked arms in solidarity with their teammates. According to Vice, while black men make up six percent of the American population, they account for nearly 70 percent of players in the NFL.

.@terrybradshaw: "Not sure if our president understands those rights, that every American has the right to speak out and also to protest" pic.twitter.com/PgTntwbLP9
— Tom Namako (@TomNamako) September 24, 2017

Trump, unfortunately, also spoke out on Sunday, attempting to dictate which forms of silent, peaceful protests are acceptable for private American citizens:

Great solidarity for our National Anthem and for our Country. Standing with locked arms is good, kneeling is not acceptable. Bad ratings!
— Donald J. Trump (@realDonaldTrump) September 24, 2017

Meanwhile, Trump still hasn't issued a statement about Puerto Rico, which still lacks electricity on many parts of the island.