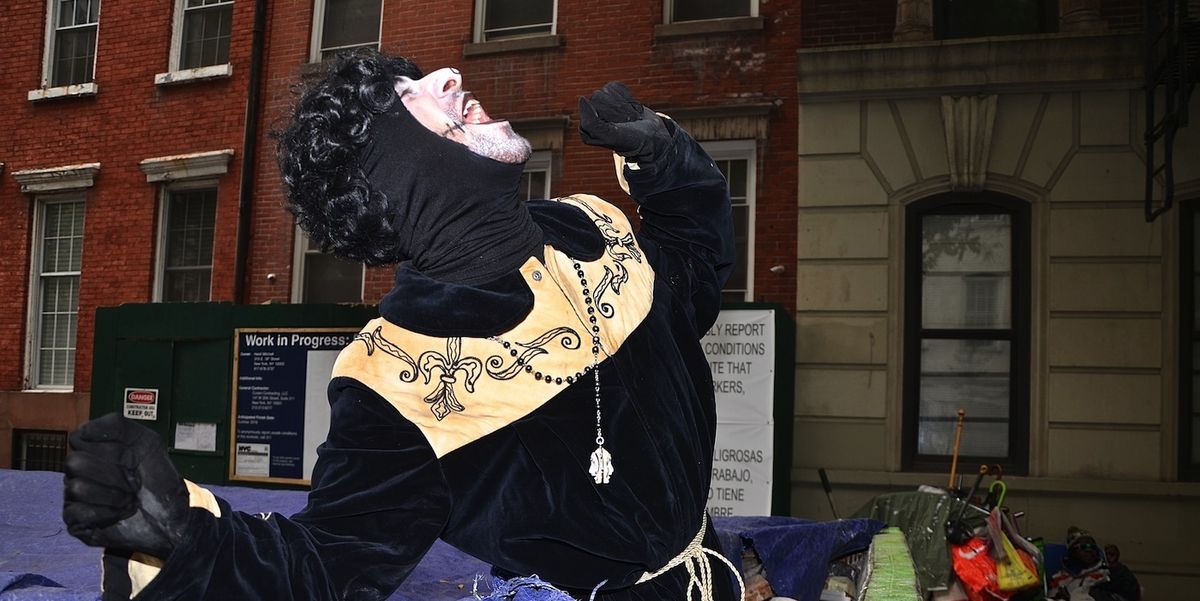 "Pain Is the Hallmark of the Best Looks": A Conversation With Performance Artist Dolly Dharma


On Halloween, NYC performance artist Dolly Dharma invited Paper to follow and photograph her/him (Dolly tells us his/her pronouns change depending on the circumstance) prepped for a night out. Along the way we learned a bit more about this enigmatic artist including the fact that Dolly only eats and drinks from places that share the letter initials D.D. (we made a trip to Dunkin Donuts and Dean & Deluca), took naming inspiration from Dolly Parton, the Dalai Lama and Jeffrey Dahmer and thinks one of the greatest things that fashion can do is give you endurance. Read more in our conversation with Dolly, below.

Tell us about your look tonight.

This one for Halloween is somewhat a commentary on how Dolly can't be contained anymore. Think about it, can you can chase after wind or pin a butterfly to a wall? I'm being caged and put on display as opposed to running on no schedule, and no way of knowing where I might fly to next. It's poking fun at that idea. I go with my gut, and this is what I'm being told to wear on some subconscious level. Halloween is also the one day out of the year people get to go out and be me for a night, so I myself have to really amplify what I do. I actually chose the core of what the Dolly signature looks are based on running an algorithm through a system of every single look imaginable through Google, and what you see is a rough rendition of what hasn't been worn yet.

What does fashion mean to you?

Fashion is the fastest way to see into someone's head. You waste little time trying to get to know them -- it's a direct line. It's also important to not take it too seriously. It shouldn't become this precious thing that incites the "individual" in you to rise up and meet confrontation every time someone doesn't get it. I defend myself only when it matters. I'm usually in a rush, so I don't have to say more than 'I'm going to a costume party' to get by. If they are so invested, and insist on following me, I will divulge more, or maybe, like now, pass this interview along. You have to forget what you're wearing sometimes in order to enjoy it. You don't want to wear something that reminds you're in a look. And at the same time, pain is the hallmark of the best looks. I tell kids, if you feel a bit unsafe, unstable, or uncomfortable, you have something there. Something that you will break through [and that will become] endurance and having more of a back bone. I can't tell you how many of my looks broke down, or broke me down -- but those were the ones people remember. Fashion is also attractive. People who can dress with care, can put together almost anything else with that same same keenness to detail. At the same time, fashion is the marker for us crazy types. It's the ones who don't dress up that usually scream on the train, and aren't so trustworthy. With fashion, it's plain to see what will already be crazy about us, that we can let our guard down. Some of us are the most normal of them all.

Dolly Dharma gets ready before a night out


What inspires you to create these looks?

You. Having people to create for does. Night after night, when you have exposed yourself to so many smiles and seen what the reception could be, only then do you keep it going. It's a shame because I create a mess everywhere. My family and friends have only ever seen the part where it's a mess, they don't get to see what the mess turns into. If they did, they would be more forgiving. At my core, it's Surrealism, Dadaism, Expressionism -- it's all these things, and forgotten ideals. You're only as good as your influences, and if you pull from all over you have the recipe for something fantastic. Its nothing drag, per se, but I began as a drag queen and then I went off book. And then again, Dolly had had several incarnations long before then. I grew up watching wrestling, and have now been going on some fifteen years on the stuff. There's a lot of cross-pollination between what they do, and what I do. I also saw a play, Shockheaded Peter at a crucial point in my life when the bridge between what you were as a child and who you'll be as an adult become intermingled. Much can be attributed to that. The looks also come from a bygone era of club culture. I don't want to say that's the be all end all, but if anything it's becoming more apparent that the past grandiosity that came from surrealist dinners and bauhaus parties, etc, is something I feel is being lost person to person, and needs to be upheld.

How was your childhood?

All of this can easily be explained via middle child syndrome, but I would like to think there's more to it than just that. I always had the television on, I was always an avid reader, craftsman and creator. I grew up with cable. And in the growing up there were certain things I had admired and always wanted to see in the world, but never quite found the right places or ones that had these qualities. There was this almost complete absence of weirdos you could aspire to be -- outside of the ones that had existed in fiction. I knew pretty early on there was a reason for that. I think at some point I held out as long as I could to not be who I wanted, hoping someone like it would come along. Then it hit me, that YOU are that person who hadn't come along. I was to be the one I wanted to see.

Were you always Dolly?

Yes. I'm sure deep down there exists a more long drawn out answer that details my name/my being around for centuries, before humans knew centuries. But to shorten things, to keeps it human, the name came in 2006. By then I already had been experimenting with music for a while, and needed a name that would be more accommodating to what I was creating. I took some influence from The Dalai Lama -- its a play on words, for sure. Then I turned to the more striking musical influences, the Micky Mouses, the Marilyn Mansons. I wanted my answer to that. I appreciated a combination of Marilyn Monroe and Charles Manson, so why not Dolly Parton and Jeffrey Dahmer? Only no one would pronounce "Dahmar" correctly -- this is due to my obsession with a TV show [ Lost] about a group of people who crash landed on a mysterious island, that they all thought I meant "Dharma." I was glad about it though. Enough so, that the show/mystery was already so much a part of my being that it stuck. 'Dolly' is an attribute that shares ties with my mother's obsession with Dolls. The name almost came to power right as her money to keep buying them began to wane. And 'Dharma,' fell under the parameters of being representative of my father. It's both masc and fem, with the fem side (Dolly), leading the warship. And if it's not already too much information, Dharma, is a hidden acronym I'll now reveal, meaning Developing Humanity through Artificial Reality for Mankinds Acceleration. Does having an acronym really matter at all, unless you are going to live by it?

Do you have a day job?

I sell stocks and bonds. Meaning, what I have in stock, people bond over. But really though, everyday is an ongoing project. I haven't vacationed in eight years, or made enough money to even take a cab to and from venues all that often. So I'm something of a play on a traveling circus when you see me out. I'm usually traveling with shit. And I do all this largely by myself. I make it a point to be self-reliant though. Not all the time are you going to be agreeable or hot enough to be around and work with, so take that into consideration. I think for so long now, I've taken into account that you can't rely on anyone but yourself -- that what I make now can only be made by myself. It's why you don't see me in a group when I'm out, or in a band. I would love these things, but that also entails convincing a group of people that your own talent/neurosis is a viable thing that can get them far or fun. I would hate to have something that may not even be all that good called "art," and mislead people. That's the basis of a cult. And at the same time, I fall into the camp of being a loner. I'm so used to doing it on my own that help would mess with my chi.

How do you feel about the state of nightlife right now?

It ebbs and flows, yet it still goes? It's hard to say. For the most part, I have seen a lot of what it has to offer both up close and in the background. It's not dead. Anyone that says it's dead, is dead themselves. I wish that more people would know it's not just drag and club kids though. There is a thriving burlesque scene amidst it all, there are these phenomenal vintage parties, circus parties, spoken word -- you name it. I would encourage anyone to explore if one thing is not your cup of tea. But at the same time, it's not always the most welcoming of places. The atmosphere isn't as friendly because everyone is convinced that being mean is a good way to get your friends to laugh, or to obtain some misplaced sense of notoriety, or they were taught that's how you have to be if you want to be considered a "drag queen." The uncalled for bitchiness runs pretty rampant and some of it can be blamed on thinking someone will disagree with who you are at the time, that you have to be bitchy first before they do. I don't play into that. I pride myself on being grateful. I have manners, people. I'm considerate and polite. Somehow being that has become edgy in and of itself? In an environment where drugs and drinking are the "cool thing to do," having class and conducting yourself with a level of class isn't. They feel they have to "perform themselves" to the point where they are performing better as performers than they are who they are. I wish more people understood we are all mortal after all, when we go home alone to ourselves, and have to "disrobe the night." We are all in this together.

So ultimately who is Dolly?

I am the sword in the darkness. I am the watcher on the walls. I am the flamingo that guards the realms of pigeons. To be continued, always.