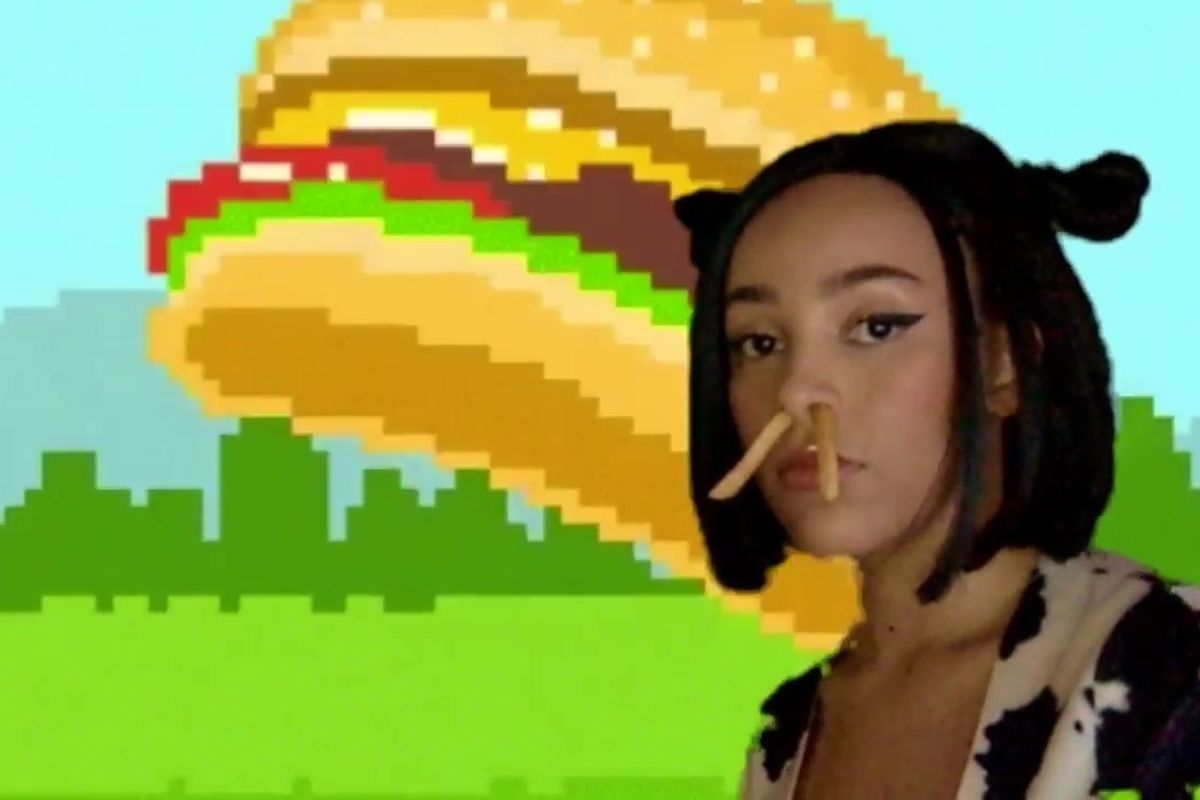 At just 22, LA-based rapper Doja Cat already has an extensive catalogue of infectious, mind-bending tracks. Doja (born Amala Zandile Dlamini) has been putting out music since she was 16, including adored singles like "So High" and her critically-praised album, Amala, which she discussed with PAPER earlier this year. But one of the musician's greatest strengths is her sense of humor, which she previously displayed on Soundcloud tracks like "Nintendhoe" and "Take Yo Bitch." Which brings us to her biggest sensation yet: "MOOO!," a viral hit released over the weekend with the intent of disappointing "woke hip-hop people."

Related | She's About to Be Everywhere: Get to Know Doja Cat

At this point "MOOO!'s" iconic hook, "Bitch, I'm a cow," is probably already lodged in your head. The song features Doja embracing life as a cow, referencing her "milkshake" and "other heifers," with a note-perfect accompanying video that the artist made on Photobooth. There are huge, bouncing anime boobs, lo-fi dancing cheeseburgers, milkmaid outfits. "MOOO!" needs its own special category at the VMAs. There have been memes galore!

We spoke to Doja — while her cats fought in the background — to get all the tea (cream?) on her beautiful creation.

How did the inspiration for the song strike?

Well you've seen the outfit that I wore in the video, that cow print set that I'm wearing. I just thought it was so ridiculous.

So, I like to make music in bed. I start at about 2 PM, and it takes about six hours to finish it. And that day that I started that song, I was wearing the cow print top but not the skirt. I actually couldn't fit the skirt like a week before this. I'm getting thick right now. [Laughs] I had some peanut butter, some apples, you know what I'm saying?

But I wore the top in bed while I was making the song. I had this sample that was chopped by my friend Troy Noka, and he just emailed that me. I decided to make something, put the sample into my program, and I looked at my shirt, thought "this shirt is cute," was inspired by that top, and just did it. Bitch I'm a cow. It was like the first thing that came in my mind!

Did you make the video yourself?

I made it in my room actually, around 5 PM, 6 PM. When I finished the song I was like OK, I still have a tiny amount of daylight. I don't have a lot of good lighting in my room, I have Christmas lights and one lamp, but it's not powerful in any way. So I just set up this sheet from when I was a kid. I used to love green a lot when I was a kid, and I have all these green sheets that I never used. I just thought, "This sheet is perfect!" It was bright enough to do a green screen, so I thumb-tacked it to a wall with a hammer.

It actually took a pretty long time to get the graphics for the background settled and everything, because GIFs are difficult, and I don't know shit about technology or editing or anything. So I just thumb-tacked the sheet to the wall, I set up my computer on some blankets, cleaned out my room a little bit — my room was like a tornado, my room was terrible. I just put the graphics in Photobooth, I used the green screen feature, put on an outfit, did my makeup, and to complete the whole video it took about six hours.

What has it been like to watch "MOOO!" blow up?

It's really interesting to watch. People are putting out stuff right now, like there are a lot of really big projects coming out, and you'd think that people would really be more geared towards that sort for thing. So for me to make a song about cows, which is obviously kind of out of the box, and for people to pick up on that as something important? It's insane. I don't know how to process it, honestly. It's super cool though, and it's refreshing to see that people have a sense of humor.

You've been putting out great music for a long time. Is it strange that "MOOO!" is the thing that really caught on?

I've made silly songs before. I actually just put out a song a few weeks ago about video games ["Nintendhoe"]. That's one of maybe four songs I've made that are super ridiculous. Those didn't really catch on, but this is the one that did. It's cool to watch, because it's not anything that's serious, and it kind of leaves room for me to relax about it. It's not like I'm trying to hold up some sort of serious image right now.

With "So High," I feel like that song was so particular, and so geared to a certain audience — stoners, and things like that. That's cool, but it's not necessarily me anymore. I don't smoke anymore. I can drink [Laughs] but I don't smoke. I'm totally not a pothead anymore. If I could be straight-edge by the end of this year, that would be great. I'm not into zodiac shit. I like to just have fun. I think it's great. This is super fun to watch. People's memes are hilarious.