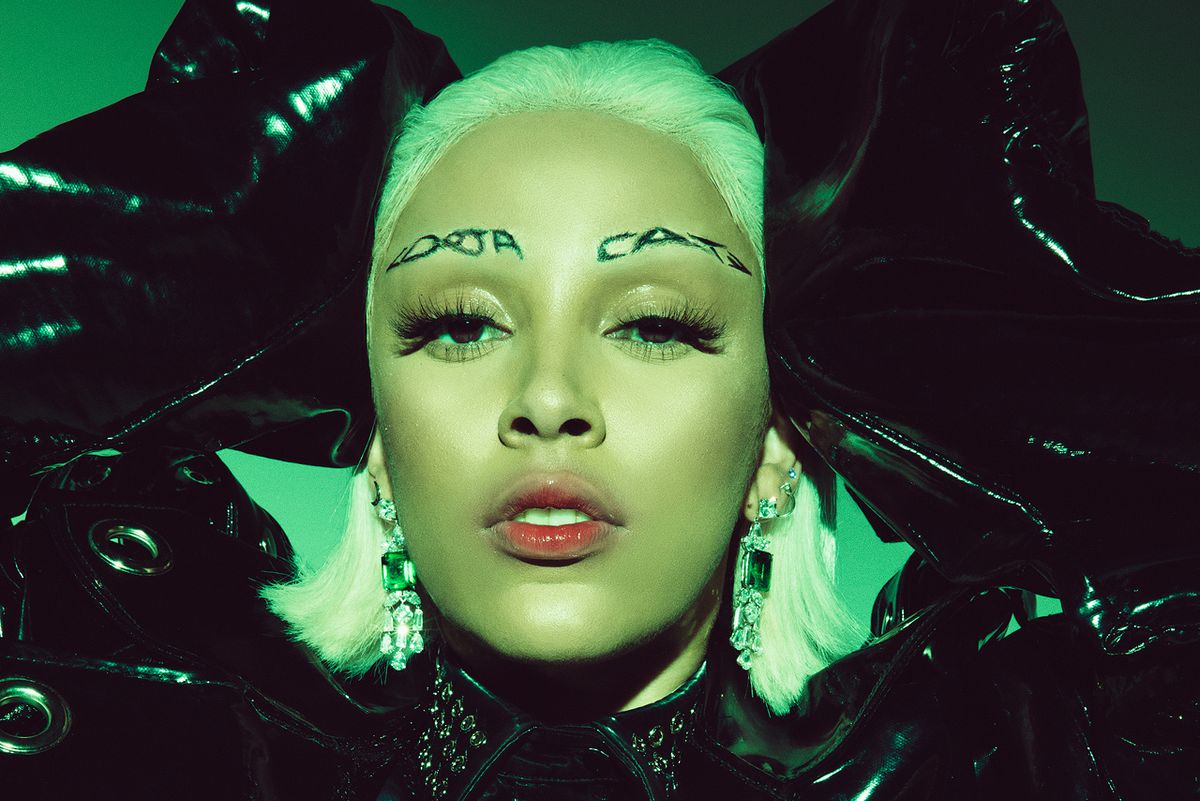 When asked about long-term goals, most artists tend to supply some sort of tidy, label-vetted statement about wanting to touch lives or change the world, but for Doja Cat, the answer is a little more left-field. "Probably putting on pants," she says, lowering her Lolita-esque sunglasses for dramatic effect. "Now that will shock people."

Outfitted in what amounts to a sheer stocking bodysuit, the 24-year-old Los Angeles native — born Amala Zandile Dlamini — is just as ostentatious and provocative IRL as she is online, prone to punctuating her sentences with theatrical facial expressions, sweeping hand gestures and the occasional devil-may-care eye roll. Doja's aberrant sense of humor, renegade attitude and love of "making dumb shit on the internet" has played a big part in her pop culture rise. It's something evidenced by the viral success of last year's notoriously absurdist "Mooo!" — a heifer-rific anthem that currently has over 65 million YouTube views and features Doja in a coquettish, cow-print outfit, sticking french fries up her nose while dancing against a makeshift green screen in her bedroom.

Doja dubs Hot Pink a hard restart for her career, the most "refined, chiseled" representation of herself yet. Spurred by some drastic lifestyle changes — including moving into her own place and quitting cigarettes and weed after an illuminating acid trip — Doja sees the record as her finally "coming into [her] own" and truly embracing her strengths as an artist. As showcased by her ample use of salacious double-entendres, love of a horny declarative and frequent reference to pop-cultural happenings, Hot Pink is a witty, irreverent, transgressive encapsulation of her abilities. She's the kind of "unapologetically and aggressively sexual" star who's able to cleverly combine dick jokes with niche celebrity gossip references (like her name-checking Lil Xan and Noah Cyrus' former relationship in "Bottom Bitch") in a rapid-fire, stream-of-consciousness way that feels almost like scrolling through TMZ-meets-TikTok.

But Doja's omnivorous cultural appetite shouldn't come as any surprise, given her background as a suburban teen who, like many in her generation, spent the majority of her time glued to a computer screen where sub-cultural boundaries were blurred and information about anything and everything was merely a click away. Those years were a formative time that involved a brief stint uploading makeup tutorials on YouTube and, later, SoundCloud bedroom recordings that eventually caught the attention of RCA Records. But, Doja confesses, underlying all of her online activities was a near-"religious" obsession with a chatroom — which she declines to name or share any further details about, citing the fact that "people are fucking crazy" and will try to hunt it down — that she still frequents to this day.

According to Doja, she'd skip school for days at a time, holed up in her bedroom and hanging in the chatroom. She'd spend endless amounts of time engaging in the "light-hearted play-fighting" that was the predominant mode of communication in the chat.

"People would pick on me and use horrible, horrible language, just the worst, and I just didn't understand why people were so crazy on there," Doja says. Rather than leaving the chat room, she instead developed a thick skin and eventually joined in on the fun via her own "offensive" rhetoric. "So I became the person who would make offensive jokes and do things sort of out of the box."

But this internet-bred tendency toward the offensive has gotten her in trouble in the past. While she never makes direct reference to it during our conversation, the topic of her controversial 2015 tweet, which directed a homophobic slur toward Tyler, the Creator and Earl Sweatshirt, looms heavy. Shortly after "Mooo!" went viral last year, the post about the two former Odd Future members resurfaced, leading to a sizable amount of backlash. Doja initially responded to the incident by tweeting, "I called a couple people faggots when I was in high school in 2015 does this mean I don't deserve support? I've said faggot roughly like 15 thousand times in my life. Does saying faggot mean you hate gay people? I don't think I hate gay people. Gay is ok." And though she eventually acknowledged the severity of the situation in a subsequent apology, the controversy led Doja to significantly scale back on the platform — going so far as to delete all of her tweets, save for a tour announcement.

Since then, Doja admits that she hasn't been on Twitter much, even as someone whose brand and career was, in part, launched on the platform (the viral #MooChallenge saw the likes of Blac Chyna dancing along to the track in a cow onesie). Today, she tries to steer clear of anything that would cross a line and refrains from commenting on other cultural comings and goings — adopting a tone that's a little less 4chan in spirit. Instead, she mostly uses Twitter to find "memes and shitpost and say something funny to my boyfriend" and, seemingly, do regular clean-ups of less recent tweets. In the meantime, she's become far more active on Instagram — the ideal platform for teasing her colorful video clips, funny pics and thirst traps. And while she's happy to mind her own business most of the time, Doja admits she'll occasionally roll her eyes online at the "woke hip-hop people" she once tweeted that she likes to "disappoint."

Related | Camila Morrone Can Hold Her Own

"It's me being a punk. I love being a punk to people who take things way too seriously," Doja says, though she does take a moment to reassert that she admires some of these artists and their work.

"I love being a punk to people who take things way too seriously."

"There are people who rap in a certain way, because they want to do something so elaborate and so smart that makes you go, 'Oh my God, I would've never thought of that,'" she says, a hint of awe coloring her voice. "But I'd rather be the other end of that, which is being ignorant and stupid and saying whatever I want." She pauses again, before clarifying, "Or just being, like, 'I don't want to think too hard today.'"

After all, for Doja, her approach to writing supersedes any conceptual underpinnings others may attach to her work. And given this, it's only natural that she bristles slightly when I allude to the fact that focusing on the topic of female sexuality will, undoubtedly, cause critics to view Hot Pink as an inherently political record.

"I try not to be political... I'm more like, 'I don't give a fuck,'" Doja pushes back, before reminding me that an artist's intention is just as important as external interpretation. "I never think about what I write. I just write whatever the first thing that comes to my mind is."

A beat passes before Doja shrugs. "Like, I just love romance and sex," she says. "It's not a very '-ist' album, because there's nothing '-ist' about what I do."

At this point, it's getting late and Doja has places to be. But, as we part ways, she makes a very Doja request of her manager, asking if she can just leave the building without putting on actual pants.

"Girl, we're in downtown LA," Doja's manager reminds her — something she shrugs off as she fishes around her bag for a pair of leggings, before letting out one last exaggerated sigh.