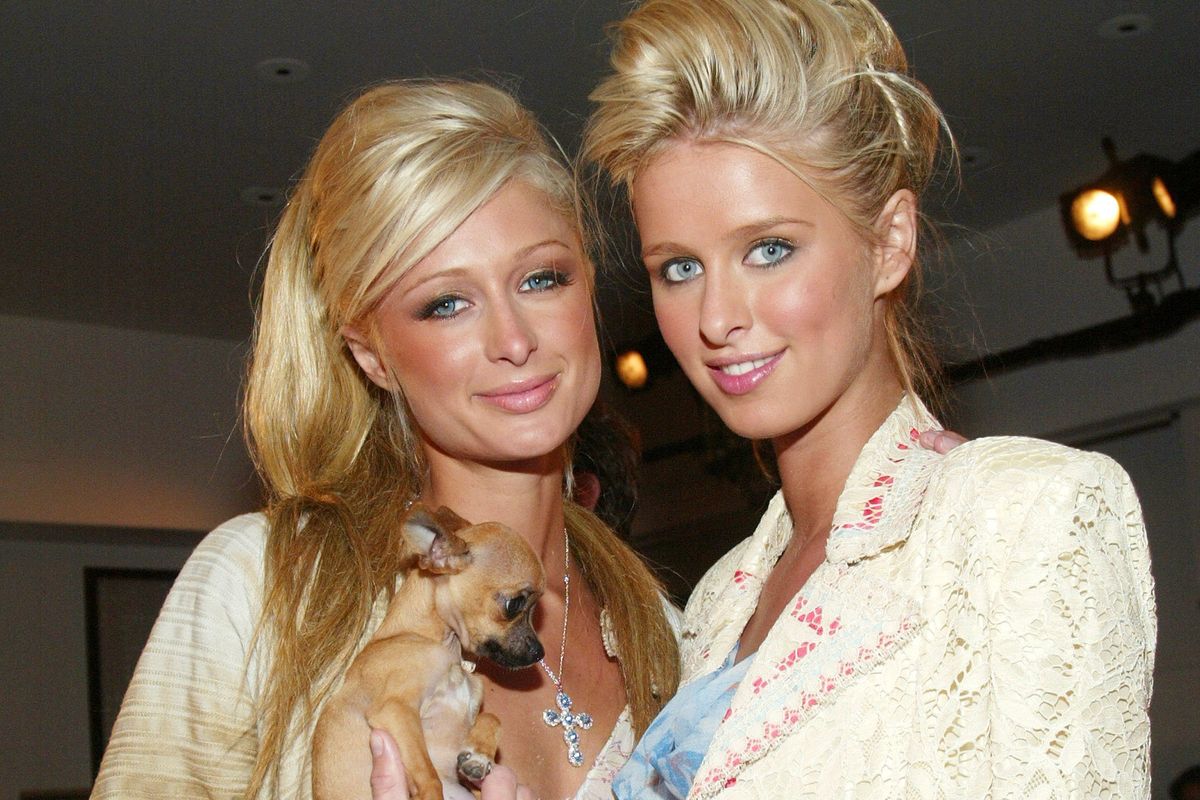 A History of Dogs at Fashion Week

On Saturday, February 22nd, Orlando Bloom attended the Boss show in Milan with a special date: his red miniature poodle, Mighty. Bloom dressed to complement the dog, wearing a camel-colored double-breasted Boss suit that seemed to drip with money (sidenote, but an easy way to look expensive is to just wear something camel — I have a camel coat I bought for $50 at an evil fast fashion chain and people always think it's Max Mara). Mighty perched on Bloom's lap throughout the show, looking less than thrilled with the proceedings. At one point he stood up on the actor's arm, seemingly eager for escape. But throughout most of the event he cuddled up with drooping eyes, as though the pounding, fluorescent affair was the perfect venue for a nap. Headlines blared that he was the "most bored celebrity at Milan fashion week," which is definitely not true as celebrities often seem really, really bored at fashion week, especially at shows they are paid to attend.

Bloom carries Mighty all over the place; W's Stephanie Eckardt has done extensive Mighty-themed journalism, noting that Bloom has transported this poor creature on a motorcycle, held in a mere drawstring bag. As far as we know, the ASPCA has not been notified. But he's far from the only pup who has attended a fashion week event, presumably against his will. Celebrities have made sport of bringing their dogs to fashion shows and related events, torturing the animals with blaring music and camera clicks, flashing lights, and endless jostling for air kisses (though a friend in Paris recently reported that no one is doing double-cheek kisses anymore, because of the coronavirus).

Lisa Vanderpump's omnipresent alopecia-stricken pup Giggy has accompanied her to multiple fashion events, including a trip to Milan last year for Dolce & Gabbana's Spring 2020 show. Taking toy dogs around in large purses is of course Real Housewives canon — Sonja Morgan and Ramona Singer even took part in a 2018 dog fashion show hosted by their colleague Tinsley Mortimer, strutting in Marc Bouwer. Teen Mom alum Farrah Abraham toted a pomeranian to Los Angeles Fashion Week in 2018, and social media superstar The Fat Jew (who apparently low-key has good politics) brought his dog Toast to a number of events at MADE Fashion Week at Milk Studios in 2015. Angela Simmons brought a pom in a chinoiserie jacket to Vivienne Tam Fall 2013. Danity Kane's Aubrey O'Day, also known from Diddy's Making the Band and for allegedly having a long affair with thumb-faced Donald Trump Jr., once took her maltese to Christian Siriano. Another, far more entertaining Trump, Ivana, brought her shih-tzu to Zang Toi in 2004, before we had an inkling that the Trumps would be our Botoxed leaders.

Cara Delevingne brought her dog Leo to the front row of Chanel haute couture in 2016, a faux-pas that not even a Lagerfeld-beloved supermodel could pull off; Leo was carried off before the show commenced. Parker Posey sat front row with her pooch at Rachel Comey's Spring 2017 presentation. Nina Agdal brought her puggle to Zadig & Voltaire Spring 2018; Gossip Girl star Kelly Rutherford, aka Lily van der Woodsen, brought her long-haired dachshund to the same show. The Crown's Matt Smith brought a fluffy maltese to Vivienne Westwood. Famous stoner Susan Sarandon was photographed with two blissed-out pooches at Chris Benz Spring 2013. OG street style star and eccentric fashion editor Anna Della Russo has been spotted with her pup at shows; Daisy Lowe took her scrappy white dog to multiple shows during the Spring 2009 season, including Alexander Wang and Matthew Williamson. Mickey Rourke, who claims that his dogs saved him from suicide, brought a chihuahua to Miami Fashion Week in 2006. Paula Abdul brought a sweater-clad chihuahua to Cynthia Steffe Fall 2003.

Dogs, in opposition to the cat person agenda, can be wildly elegant: consider the weimaraner, the afghan hound, the Italian greyhound (a Kylie Jenner favorite). The likes of Marc Jacobs and Thom Browne have used their famous pooches as sources of inspiration — Neville Jacobs has a book and hundreds of thousands of Instagram followers, Hector Browne (who has attended his father's shows) inspired a pebbled-leather bag and a line of keychains. And so in addition to being standout guests at fashion shows, canines have been incorporated into the presentations themselves – at fashion shows for humans, not just in the works of masterful dog couturiers like self-described visionary Anthony Rubio.

For Fall 2019, Lela Rose held her own take on the Westminster Dog Show, with models walking with dogs presented in categories like "Lassies Who Lunch" and "Cocktail Companion Group." Gigi Hadid held a Boston terrier while walking Todd's Fall 2018. Tinie Tempah walked the runway with his dog Pablo at the What We Wear show at London men's week in 2018. At Hood by Air's (which is blessedly supposed to return after an extended hiatus) Spring 2015 show, brand muse boychild walked the runway alongside a spotted Great Dane. Boychild took slow, careful steps in a plastic collar, feet spread wide. The dog was held close to the artist's body with a silver chain, a guard.

@tinsleymortimer on Instagram: “So honored to host the doggie fashion show for 🐾🧡🐾@bestfriendsanimalsociety’s annual #strutyourmutt 🧡 Big thanks to @vanderpumppets for…”

At his Fall 2011 show, designer, comedic genius, and noted Mike Bloomberg-endorser Isaac Mizrahi collaborated both with Cake Boss's Buddy Valastro on dessert, served by handsome cater-waiters on silver trays, and several candy-colored Standard poodles. Models with pom-pom up-dos walked alongside fluffy pups dyed a taffy-ish hot pink. "I do love having made that show," Mizrahi later told the now-defunct dog fashion website Bark & Swagger. "I just did what I thought at the moment, which was to make cakes that match clothes that match poodles. I don't know where I got the idea that they were related. Afterwards, it was such a trend on Twitter, and I got these crazy tweets about 'how could you dye these dogs!' Of course, you realize these were absolutely natural dyes, made from food and every one of these Poodles were rescue dogs."

Animals have been all over the runways during the Fall 2020 season (as Diet Prada pointed out, things seem targeted towards furries, or as they're known on darker corners of the internet, "the fandom"). Marni's Alice in Wonderland-inspired show was closed by a model in a White Rabbit head with gleaming red eyes, sans pocket watch. Thom Browne presented a Noah's Ark-themed collection; models in his immaculately-constructed fetishistic take on preppiness sported giraffe, elephant, hippo, and pig masks. Stella McCartney, famously a friend to all creatures big and small, greeted guests at her show with people in animal costumes — a bunny, a dog, a cow — who handed baby trees to guests, encouraging them to plant them to help offset the carbon dioxide produced by holding her show (you would have to plant a lot of trees for this to have any real effect).

The presence of a veritable menagerie at fashion week could hit a number of themes: a nod to climate change, a secret fashion community of "the fandom" (pups seem chicer). But I like the idea of escapism and comfort best. In the midst of a season marred, once again, by the collapsing state of geopolitics and now an ongoing pandemic, isn't it nice to think about hopping onto Noah's Ark and sailing away? Or at least hugging something cuddly. And I think that's why celebrities bring dogs to fashion shows, even though they must absolutely hate it — they're living, breathing security blankets.

While I was writing this story, a friend texted a tale of his own celebrity dog-related trauma. When working as the assistant to a formidable menswear designer, my friend was enlisted to prepare a table full of celebrities for a black-tie charity gala. The day of the event, the designer informed him that one of his high-profile guests — the famed daughter of a rock star widely known for biting the head off a small mammal onstage — had insisted upon bringing a last-minute plus one. The charity refused to add a seat to the designer's table, and so he spent $15,000 on a new one, tasking my friend with filling the seats in six hours.

It was a challenge, but my friend succeeded. The rock star's daughter arrived an hour late, toting an enormous Louis Vuitton carryall, but no date. My friend politely inquired as to when her guest would be arriving. "He's here!" she said, pulling a puppy out of her purse. A $15,000 dog. The famous are truly mutts.