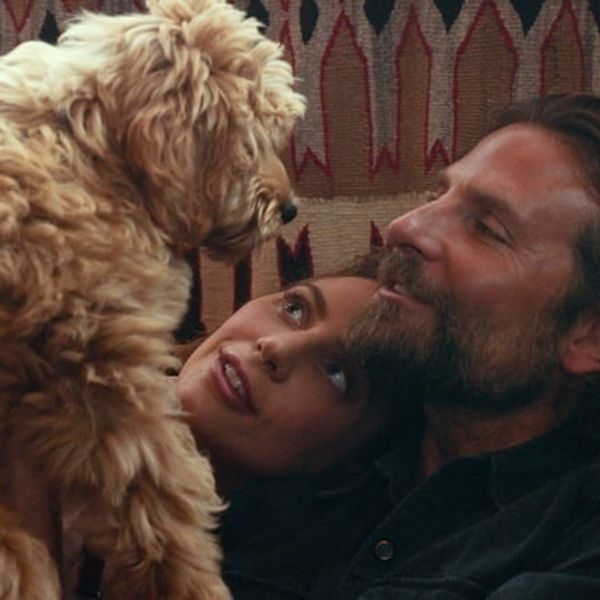 A Diamond in the Ruff

In A Star is Born, many stars are born. There is the titular star, Lady Gaga's Ally (no last name). Bobby. The memes. Greg Grunberg. Director and star Bradley Cooper's extensive self-tanning regime. Gail! But of all the stars, there is one supernova: Charlie, Cooper's actual rescue dog. Cooper also cast his IRL ear doctor in the role, but as lovely as Dr. Slattery seems, it's safe to say Charlie was the standout. He is the music to my eyes.

Charlie, a floppy, goldendoodle-like vision of beauty, steals the show. As Cooper told People, protagonists Jackson and Ally "don't have a child together but they have a dog together, and I wanted it to be part of their story. I love dogs." He insisted that there was "no nepotism" in the casting process.

Cooper joked that Charlie "has an agent. I don't talk to him much anymore. He doesn't return my calls. He always walks away from me unless I have food."

Everyone loves Charlie! My theater was filled with gasps and "awwws" at his every move. And (spoiler alert) he makes the climax of the film even sadder: Charlie, waiting for his dad outside his suicide garage, lead to a flood of steaming tears unlike any I have ever known. Why, Jackson?! Why?! Maybe is time ter let the old ways die, but it was not time for you to die!

Charlie surely deserves an Oscar for his pathos-leaden performance. Even PETA was into him, and they hate everything. The animal rights organization has bequeathed Cooper with the first "Compassion in Film Award" for his casting choice. "Bradley Cooper's happy, adorable, and much-loved dog steals the spotlight — and viewers' hearts — in this film because it's clear that he loved being with his real-life 'dad,'" said PETA Senior Vice President Lisa Lange in a press release. "PETA has witnessed so much abuse and neglect of dogs, both on and off set, that we're hoping Cooper's kind decision sets a precedent for all of Hollywood to follow."

Adding another layer of poignancy to this big-hearted, deeply sensitive movie, Charlie was named for Cooper's father, who died in his arms after a long battle with lung cancer. Cooper told the New York Times that his father's death inspired a new, intense phase in his career. "It's a new reality," he said. "Everything, everything. It's not even one thing, it's a whole new world. And it was instantaneous. It wasn't like, months later. It was like, his last exhale, and I was holding him, and it was like, everything changed."