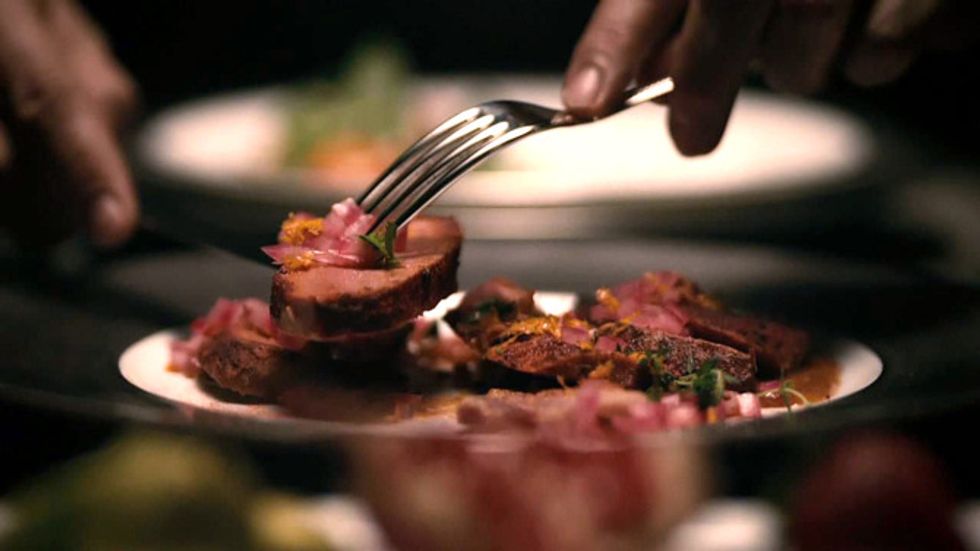 Do You Like Fashion? Food? Beauty? Then Why Aren't You Watching Hannibal?

You like the good things in life, right? Art, food, good clothing, Gillian Anderson, good acting, cannibalism, dread, elaborately planned murders? Then start watching Hannibal, the best show on television (seriously), which returns for its third season tonight on NBC. The breadth of reasons to watch this show is staggering (that's a joke, which you won't get until you start watching). Here are a few of them:

It's Beautiful
With extremely well thought-out psychedelic sequences, corpses moved into breathtaking pieces of art -- particularly in scenes where series protagonist Will Graham (Hugh Dancy) mentally reenacts the murders he is trying to solve -- and a rich color palate that is never, ever allowed to come anywhere close to "conventional," Hannibal is easily the most visually pleasing series on the air -- far and above most movies. Death has never looked this good.

It's Got Great Clothes
Hannibal Lecter (Mads Mikkelsen) is all about looking good while he kills -- he even wears bespoke suits under his plastic murder outfit, just to make sure he doesn't ruin his clothes with blood. In this season, he gets to step up his fashion game enormously, alongside Gillian Anderson's Bedelia du Maurier, as they devour the best that Florence has to offer.


Mmmm... Food
Filming food is notoriously difficult. But Hannibal presents the good doctor's cooking in a way that always, always makes it look both delicious and just the slightest bit off-putting -- we know what's actually in the dish.

And that's not even mentioning all of things that just make it great in general -- its measured, effective critique of cop show conventions (often by putting the viewer in the mind of the killer), its fantastic, purple writing, grim, enthralling performances, and its terrifying score. Suffice it to say: Hannibal is the show that the kind of teens who use Twin Peaks as a signifier of cool will be into in 20 years, and you'll be scrambling to pretend you watched it while it was on.

Just let it happen. Immerse yourself in the world of Hannibal. The first two seasons are available on Amazon Prime, and after you watch them you can appreciate all the ridiculously intense fan videos devoted to shipping Hannibal and Will. Shea Serrano has a fantastic coloring book featuring the characters over at Grantland, and Sean T. Collins has a great longer explanation of how powerful the show has become at Rolling Stone.  Stay on top of the wave, and eat up.