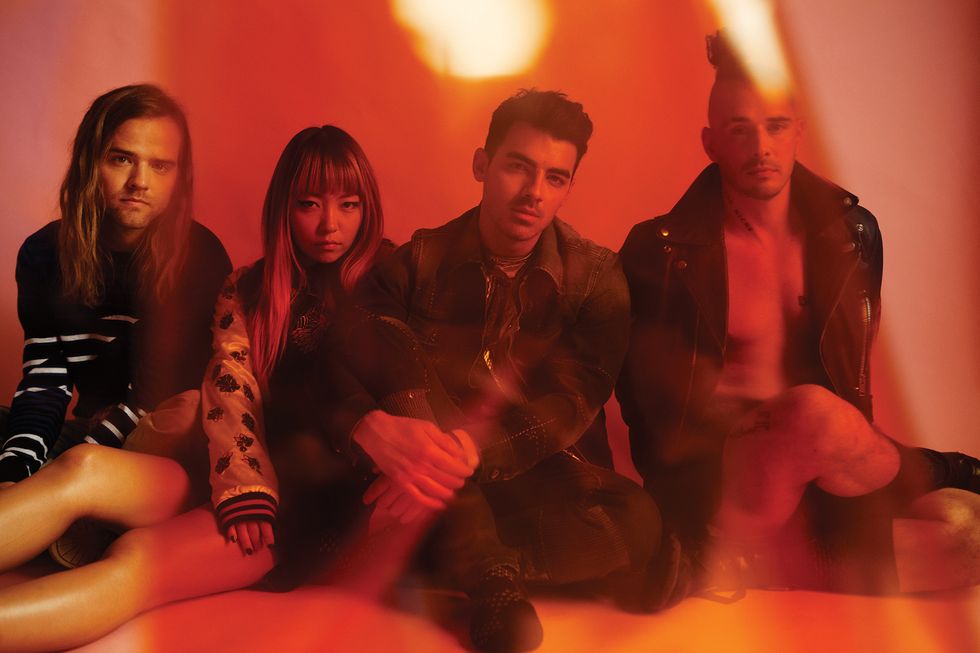 They're on tour with Selena Gomez and have a full-length debut album on the way: pop-funk four-piece DNCE is keeping the party going all summer long.

We met up with Joe Jonas, JinJoo, Jack Lawless and Cole Whittle of the new pop-funk party band DNCE during a drippy-popsicle sunset one evening in downtown Los Angeles. Even if you've never heard of DNCE or seen them starring in the latest Diesel campaign, you've likely heard their music. "Cake by the Ocean," the bouncy disco single off 2015's Swaay EP, has been splashing around the talk show and festival circuits, pepping up Sprint commercials and creeping steadily up the charts since its release last fall. At first glance, this grown-up teen idol, forever-in-shades fashion plate, scruffy no-fuss indie guy and tatted-up glam rocker with an off-kilter mohawk hardly look like they'd be in the same bar, let alone the same band, but their easy chemistry and deep camaraderie is palpable. "It's kind of unheard of to start a band with people who all get along, spend every second together and don't want to kill each other," Jonas says with a smile.

To understand DNCE, you must first understand the band's lead singer, Joe Jonas. After making his name at 16 (alongside brothers Kevin and Nick) as a member of the Disney-masterminded singing and acting juggernaut, the Jonas Brothers, he took a break from music after the trio broke up in 2013. "I didn't want to just rush back into things [after the breakup]," he recalls. "It's very tough in the music industry to have a second chance and come back with new music that has an effect again." While he figured out his next move, Joe started working on music with his friends for fun, trying to wrap his arms around the funky, Hall and Oates-inflected pop project he'd been mulling over since his Jonas Brothers days.

In the summer of 2015, things snapped into focus. He decided the sound was better suited to a group project and recruited his old touring buddies Lawless, former drummer for the Jonas Brothers, and JinJoo, the South Korean shredder whom he met when she was playing lead guitar for his one-time opening act, Jordin Sparks. A mutual friend introduced Jonas to Whittle, formerly of Semi Precious Weapons, who would round out the group as their bassist, keyboardist and de facto philosopher.

And just like that, these four 20-somethings became a brand-new band. Their name comes from a serendipitous misspelling of the word 'dance' in a group text, and the concept for their hit single was a gift from Swedish producers Mattman and Robin, who inadvertently ended the band's three-day-long struggle with writer's block when Jonas overheard their lost-in-translation attempt to order a Sex on the Beach — Cake by the Ocean. This unlikely innuendo inspired the jangly, wacky single that became the band's calling card and the north star for their sound — pumped, optimistic, groovy, silly and shot through with sunshine. "We sound like our personalities," Whittle says. "A mix of different people from different places who are all best friends and all having fun." Their debut EP, all silky falsetto and effervescent grooves, captures kooky romantic vignettes on tracks that use cake as a metaphor for sex and toothbrushes as a metaphor for intimacy, plus one song that playfully imagines life as a girlfriend's rentboy. It ends with "Jinx," a sweet ballad (with kazoos!) about being so infatuated in a new relationship that you don't want to jinx it by saying it out loud.

"I think in the same way that the band was created organically, ['Cake'] just kind of grew," Whittle explains. "It grew up really fast, but with loose hands around it — no one was forcing it into pop radio, or forcing the band into the conventional things you have to do to get a hit." Now, in less than a year, they've gone from playing small industry showcases and raucous basement shows, to joining Selena Gomez on her 'Revival' tour where they're bringing the party to over 50 cities. And this August they'll be releasing their as-yet-untitled full-length LP. As they discuss the future, the members of DNCE emanate the amped-up giddiness and confidence of a new band after their first big break, deepened by their personal knowledge of how rare it is for success and creative fulfillment to walk hand-in-hand. "Every single day is a dream come true," JinJoo says wistfully, as her bandmates nod in agreement. Whittle adds, "DNCE is on a groovy shag carpet ride."