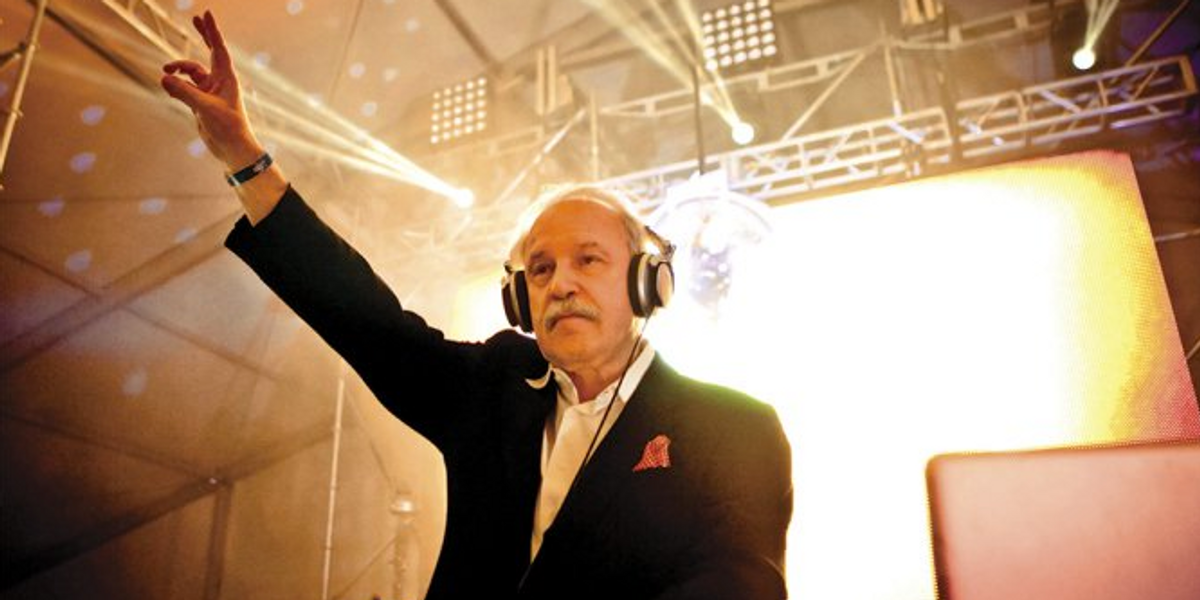 DJ Giorgio Moroder Talks Founding EDM, Loving The Chainsmokers and Why Disco is Back

For the past 50 years, the Italian Elton John collaborator and Barbara Streisand confidante has remained one of the powerful puppeteers in music. You might even be a die-hard EDM stan without knowing his name, but you should. Not only did Giorgio Moroder discover disco (that's right) but he was engineering electronic music well before your first GarageBand masterpiece or thought to make yourself a Facebook fan page.

Now, at 76, Giorgio is moving centre stage. Still collaborating with some of the biggest names in modern music, the three-time Grammy and Oscar winner is now an international DJ, so worldly he can casually drop how much he loves New Zealand. Or why Freddie Mercury was hard work. Or that Daft Punk know his songs better than he does. Or the fact there's an all-disco, all-the-time club named after him in LA.

There seems to be a consensus in the music industry that you're the father of both disco and electronic music. How surreal is it to be credited with creating several of the biggest genres in music?
I'm lucky they don't call me the "grandfather" of EDM. There were three or four guys and me who established disco, then what I was one of the first ones with electronic. It was maybe '78, '79 that I was using all electronic instruments.

Which is crazy because the genre now is so heavily dependent on all this technology, but you were doing it well before that technology was available.
It was much, much more difficult to do it. I had the big modular which is the size of a wall. To get any sound out you needed to connect it like an old phone switchboard. It was totally out of tune all the time and now-

It's a laptop.
Yes, a laptop. You have all those sounds and so many more. It's still difficult, but much, much easier.

Right, and because of that technology there's this whole democratization of electronic music, where anyone with a laptop and some headphones could brand themselves a producer. How do you feel about that?
It's true! You have to have a little musical taste, but technically it's easier. You don't even have to play a keyboard anymore. You can put in a loop of a drum and that's it. Kids of seven or eight years-old could produce a good EDM track technically. If the people out there who buy the records knew how easy it would be to do it.

In that case what's the difference between a good EDM producer and a 10 year-old on a laptop?
What makes a standout track?
Well I'm a relatively successful composer, but I could compose 10 songs and if there's one song out of 10 that after a few weeks of listening is still okay, then that's good. If you have 100 songs that you think are good, there are probably only 20 that are good.

How do you know, personally, that you've got it? What makes you say "this is it"?
You don't know. Sometimes I would wake up a day after and say "did I really think this is a good song?" that I did last night?

Totally, at the time you're thinking "this is genius"! And then you hear back and it's so embarrassing. It's like seeing a picture you thought you looked amazing in when you were drunk, then seeing it sober.
Thank god I didn't do drugs or anything. If you're into drugs and especially pot, everything sounds amazing.

Have you often found yourself working with musicians who are always under the influence? Or who require drugs for their creative process?
I would work with musicians who took drugs, but because I, as the producer didn't, they would never do it in front of me. Musicians love to work at night and at seven or eight o'clock I would go home.

In the 70s/80s drugs must have been so prevalent. Why did you stay away?
I never smoked, I drink occasionally. A few scotches or vodkas. But I had some friends who had major problems. Major problems. Marriages broke up because of drugs.

You've worked with so many superstars, who do you find yourself always coming back to to collaborate with?
With Barbara Streisand, I did 80 songs or even more, she was like a sister. Are you English?

No! I'm from New Zealand.
The best country in the world! I was in New Zealand I did a DJ gig in Auckland with Kylie Minogue. I ask if you're English because I noticed that the British are mostly nice but some are not that nice. I worked with Freddie Mercury and uh..

Freddie Mercury wasn't nice?! What, arrogant?
He was okay. A little bit, yes. Well the English has done a lot for music, you know, the Beatles, but the English think they invented music. Freddie was nice, but Freddie was difficult because to Freddie, you couldn't say do this or that. He was an extremely good pianist, composer, lyricist, actor.

He had it all.
Yes. So it was difficult to tell him "can you do it again?"

How have you found navigating relationships like that? Artists you don't click with?
Except Freddie, I mean, I haven't really. Elton John was great. I did one song with him 'Don't Go Breaking My Heart', I did a dance version of that song with RuPaul. RuPaul and Elton got wild, while they were singing. Smooching and schmoozing. I still have the tapes.

Bring them out!
I don't want to get involved!

When you were in the early stages with EDM, did you ever anticipate it was going to to become as big as it has?
Yes, because late 70s the big synthesizers were starting to come out. Then slowly it went into digital recording, like taking a real drum recording it and putting it into the machine. You could extend a song make it longer, shorter. If you're not a good piano player, you can play very slowly then speed it back up, so it sounds like the best piano player in the world.

So when you look at EDM giants now, like Diplo for example, do you feel connected to their music? Like you had a hand in it?
Yes, I love it.

What about the sugary EDM, like The Chainsmokers.
Oh, I love them.

You love them!?
The two hits. The one when they're in the car...I don't know I remember by the videos.

The one where the car is bouncing? That's 'Don't Let Me Down'.
Yes that one and then the hit one, Closer. They are quite different from what you hear, they don't care about steady rhythm or steady dance. They're quite good.

If they ever read this I'm sure they'll be overwhelmed by this kind of praise from Giorgio Moroder. Do you think the future of EDM lies with artists like The Chainsmokers?
I don't know, it's so hard to tell where it will go. Maybe full circle, maybe EDM artists will go back to the origins, play piano.

Is there anyone in EDM that gets starstruck around you?
Some of the guys know my music better than I do. Like Daft Punk, they said "oh you know Giorgio that song on that album" and I think "I don't know which song you're talking about." They really research.

I guess they're often researching for samples.
Oh god, sampling.

Oh no, what?
No no, it's just guys are taking and they change it so much that you can't recognize it and you don't have to pay. Like Kanye has this song called 'Mercy' and he took something from Scarface. Very well done actually. But there's more regulation now.

That must make it so much harder for hip-hop artists, sampling is their backbone.
Very difficult yes, if someone sues you, they sue the producer and the record company too.

Do you feel like there's anything left to accomplish in your career? Challenges you still want to take on?
Not really. I love the DJing, though. I'm not a good keyboard player so I could never go out and start to play. I could never sing because I am too nervous. But I'm going to make a new DJ set, I'll compose all the songs and some visuals and I'm going to play the keyboard, live. I had a girlfriend who would play the piano in a beautiful hotel in Los Angeles and at one day I thought, "I have to try". She let me play one time and I think I did a good job, but then I got depressed.

Depressed? Because no one paying attention?
Exactly. The people were at the bar, they were smoking, one woman was on a computer. Zero. No engagement. That was my first live piano.

That's very La La Land.
I haven't seen it! But Ryan learned the piano, right? Or he played a little bit before? I only really like the La La Land song among the nominees this year.

'City of Stars'?
Yes. Did you hear the Sting song? It's so boring! There's no question that La La is going to win, even if it was a terrible song it's the movie of the year.

I wanted to talk to you about the Oscars, I actually didn't realize until researching you that you have one what, three Oscars?! What was it like working on these huge films like Top Gun and Scarface?
Brian De Palma was great. Usually they're quite professional but one director was on drugs and fell in love with his lead actress. He was a mess.

This is juicy! Hollywood gossip from 30-40 years ago.
I can't tell you who.

Chat to me a little about the rise and decline of disco, because I have friends here and in Melbourne or Auckland who when they go clubbing only want to dance to disco. Do you feel like it's bound for a big comeback?
Well there's a disco club in Los Angeles called Giorgio, not that I get any royalties. But my wife goes twice a month. She is the queen, they shower her with champagne and the guy plays only disco. But it's full every week.

This is what I mean!
Which proves disco is back already. I recently decided to do only disco in my set. I'll never have to update that set. Right now you have an EDM song or an EDM set, after a few months it gets tired.

Why do you think EDM has a shorter shelf-life? Is it because it's so easy to create?
I don't know I get bored with it sometimes. It makes me only want to do disco.

As I say I think it's coming up in a big way. Not just popping up in a couple of specialty clubs but actually pervading the mainstream.
If only your words could go up to God's ears.