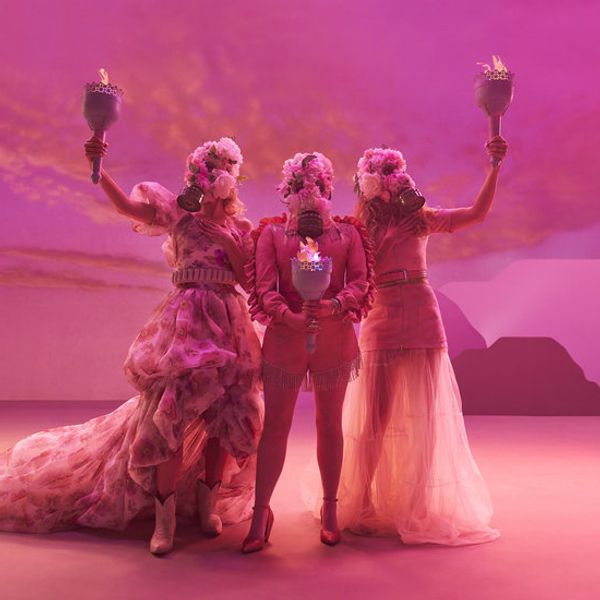 The Dixie Chicks built a career on singing about, among other things, terrible men and the consequences of their actions (see: domestic violence revenge fantasy "Goodbye Earl," anti-Bush anthem "Travelin' Soldier"). They're still doing it, better than anyone else in the game.

Natalie Maines, Martie Maguire and Emily Strayer have announced their first new album in 14 years, Gaslighter. It follows 2006's Grammy of the Year-winning Taking The Long Way, which the band released after being exiled from country radio for criticizing the Bush administration.

Listening to "Gaslighter," I can only conclude the trio heard about "yeehaw," as well as current the pandemic of half-assed "empowerment songs" and said, "No. The people deserve more."

"Gaslighter" is an indelible country-pop scorcher, inspired by Maines' drawn-out divorce from ex-husband Adrian Pasdar. If you've ever encountered… a man, it'll hit home. "Gaslighter, denier/ Doin' anything to get your ass farther/ Gaslighter, big timer" Maines sings. "Repeating all the mistakes of your father/ Gaslighter, you broke me/ You're sorry, but where's my apology?"

At some points — like the video's clip of the Dixie Chicks stomping around in army uniforms or the LBJ "Daisy" ad girl with lasers shooting from her eyes — the song feels like it's speaking broadly to systemic harm caused by the violent, selfish masculinity that they've protested for years. In other moments, it's simply, blissfully, just about Maines' lying, cheating, no-good ex. "Cause boy, I know exactly what you did on my boat," she warns. "And boy, that's exactly why you ain't coming home."

The song brings the Dixie Chicks' sound right up to 2020, with a slick, chorus-backed massive chorus courtesy of Jack Antonoff. But it stays true to the band's roots, built mostly on guitar and banjo.

We can expect more of this fresh, grounded sound on Gaslighter. "At the time, we thought we were gonna write with a bunch of different people and get different producers, and we wrote with him and we're like, 'He needs to produce it,' " Robison told Zane Lowe. "This needs to be the sound for this album, 'cause he blew us away. It was such a fun song to start with."

From scrappy indie rock bands to Beyoncé and Taylor Swift — who've both collaborated with the Dixie Chicks in the last few years — the trio is a touchstone, both for their songwriting and their integrity. They're back not a moment too soon.