In-Conversation: Discount Universe and Bria Vinaite of 'The Florida Project'

Designer duo Cami James and Nadia Napreychikov (of Discount Universe) first met Bria Vinaite through Instagram, before the 24-year-old actress landed her breakout role as Halley in The Florida Project. To celebrate International Women's Day, the three have come together to talk about the significant changes Vinaite is experiencing with her blossoming career, but also, unavoidably, the heartbreaking truths of being women in industries that don't always support them.

Their friendship grew as did both Vinaite's career and the DU fanbase, which originated in 2009, well before the e-commerce boom in the midst of early blogging. Comically, their bond was solidified when the three attended the film's NYC premiere, and Willem Dafoe (Bobby in The Florida Project) nicknamed them "The Three Musketeers," and called them all "trouble." This label, especially given that it came from Dafoe, secured a lasting connection for the trio.

In a way, DU and Vinaite have "all felt like underdogs, creating our own paths that's not always approved of by the industry or critics," the designers say. In just 2017, Vinaite transformed her Instagram persona into an acting career, while almost a decade ago DU became a fashion fixation through online buzz — not exactly classic routes to industry success.

Discount Universe: We noticed a tendency in your interviews for people to focus on the fact you were discovered on Instagram — almost implying that it was luck, as if you don't deserve to be where you are. How does that make you feel?

Bria Vinaite: At first it used to bother me, but now not as much. There were so many people saying I got "lucky." For a moment it even made me think, "Wow, maybe that is the case, maybe I just got lucky." In time the people close to me made me realize that sure, luck gets your foot through the door, but it's up to you to actually show up and do the work. And that's what's really helped me be at peace with it all, knowing I could have fucked it up and it could have gone in so many different ways. I got an opportunity that I never thought I would get, and I'm willing to work however hard it takes. 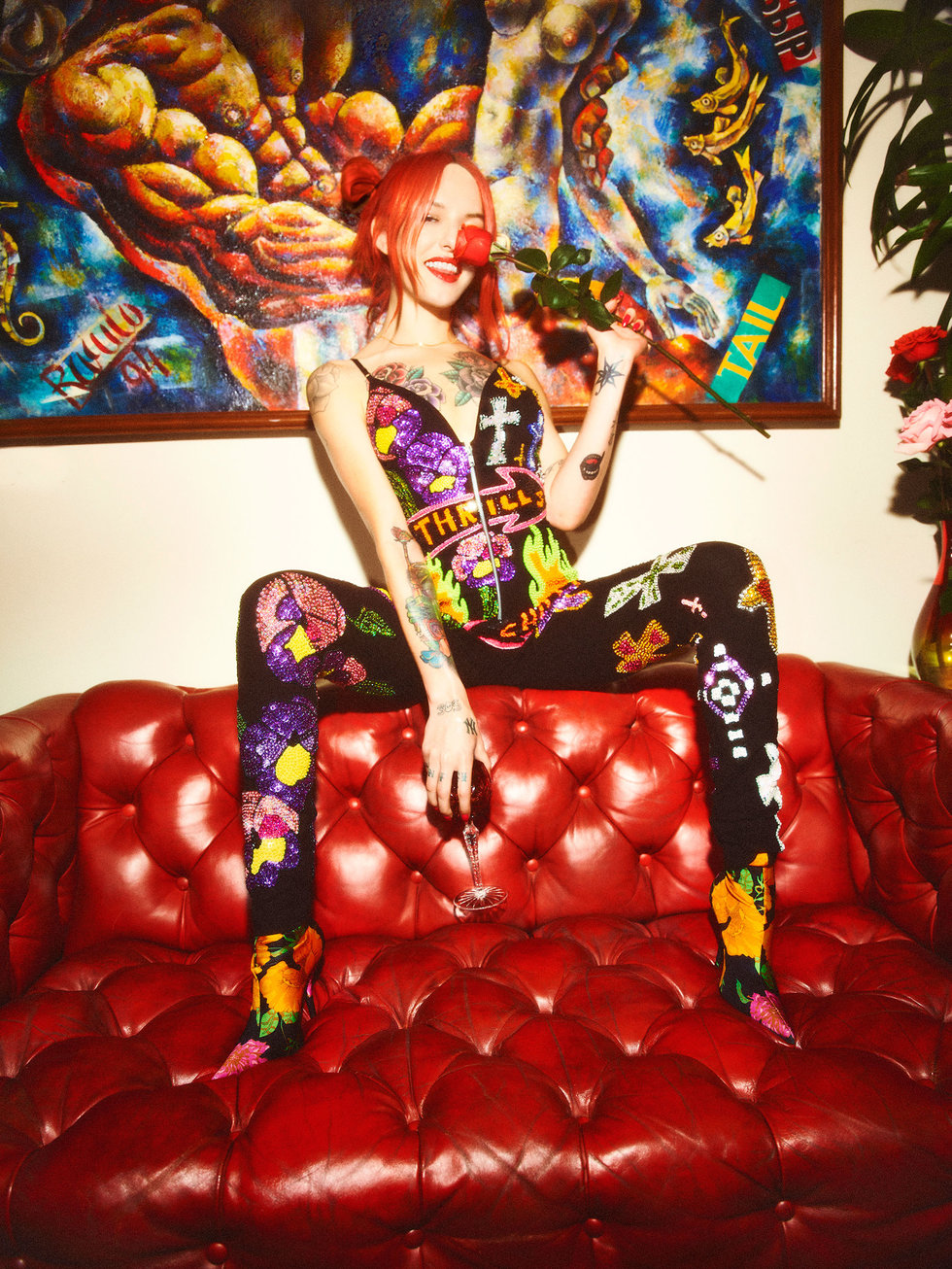 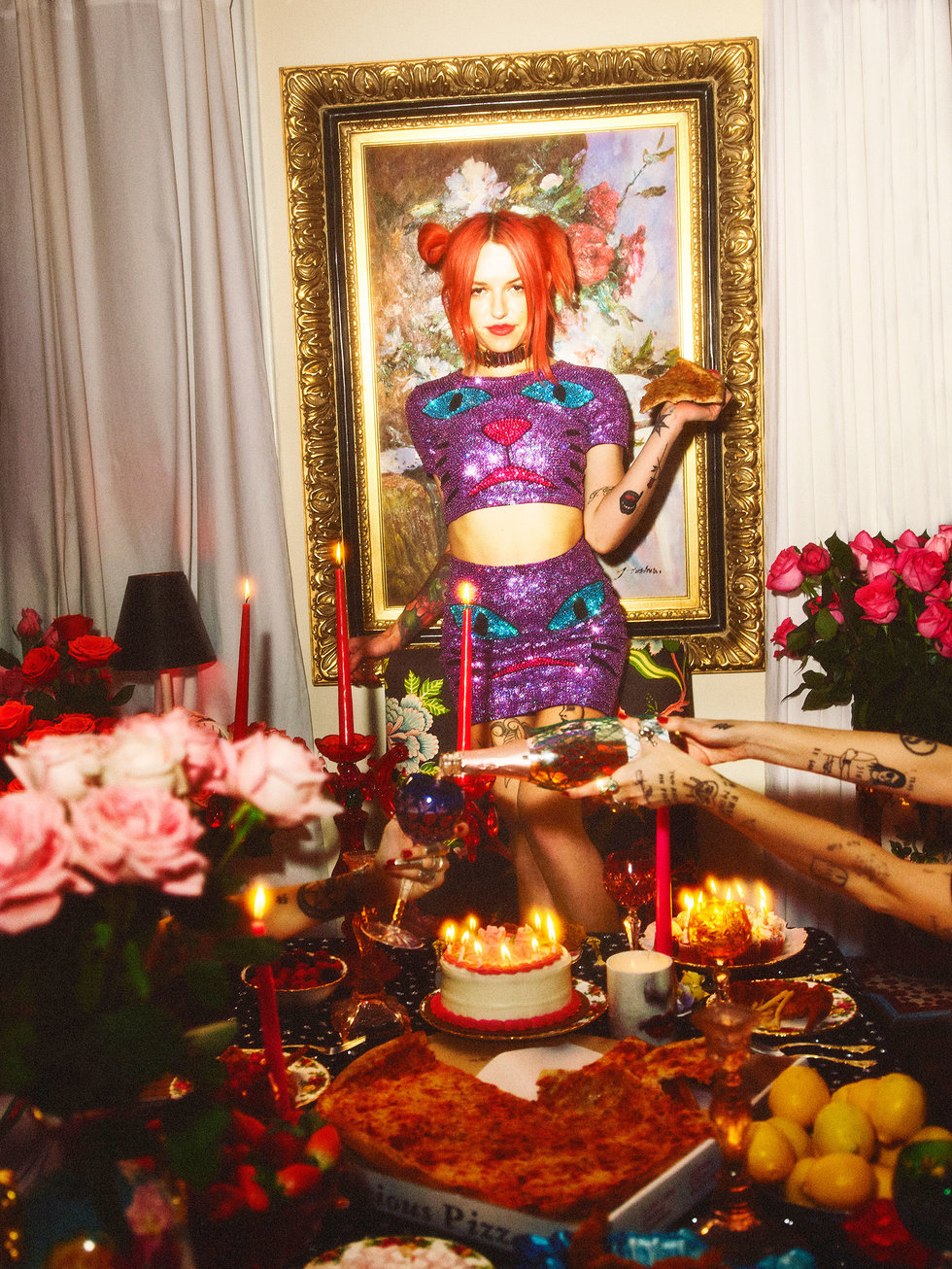 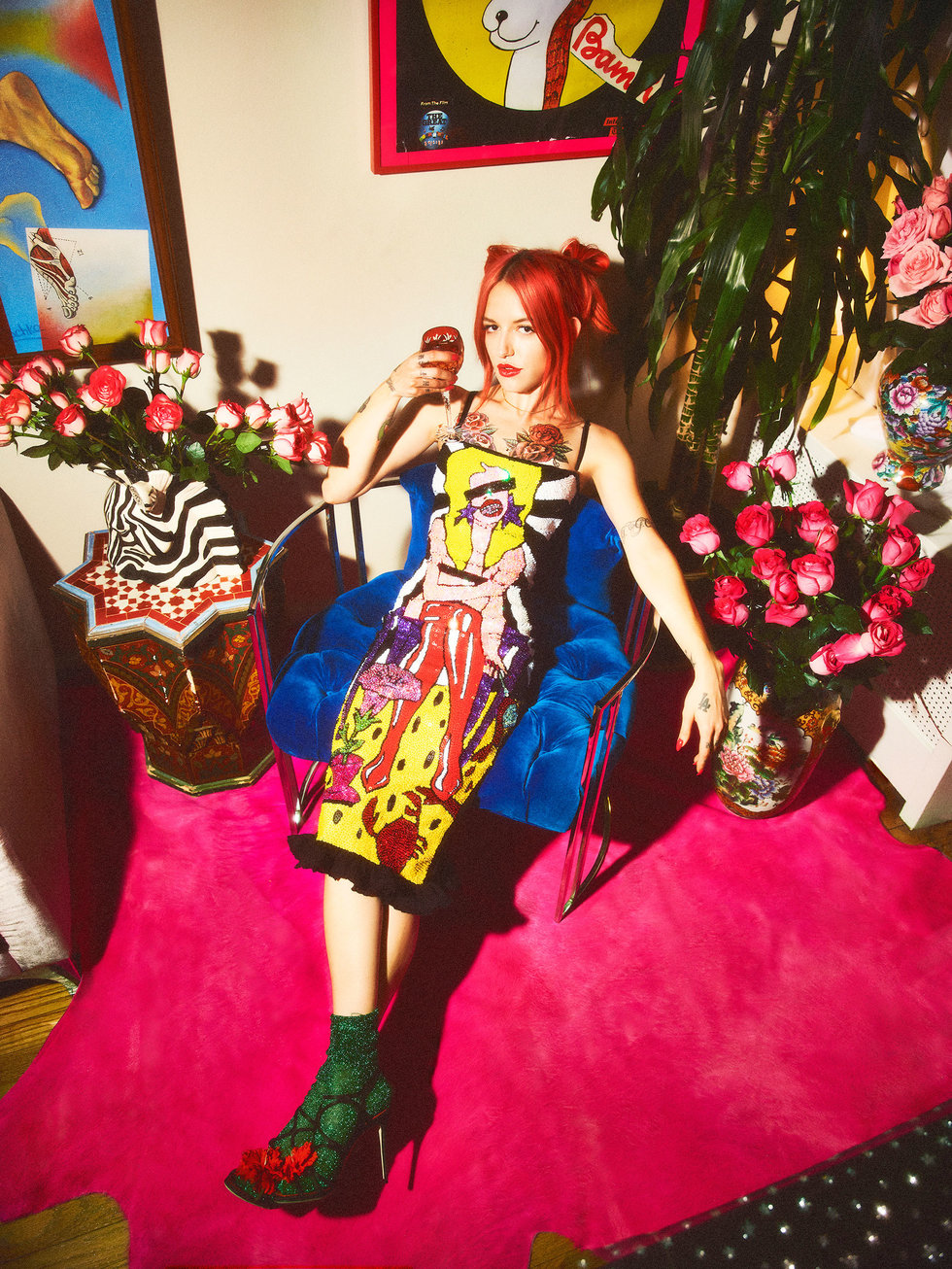 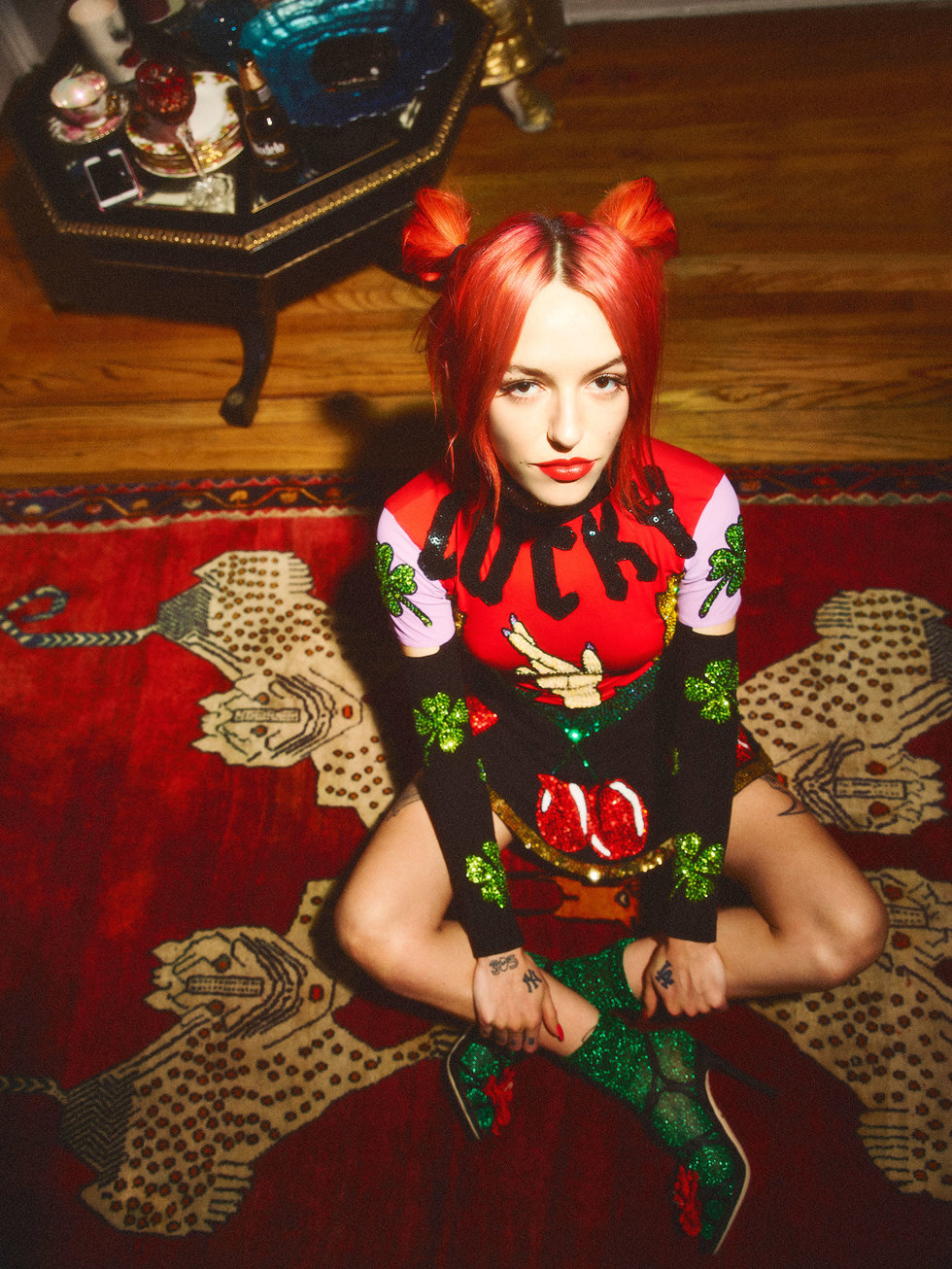 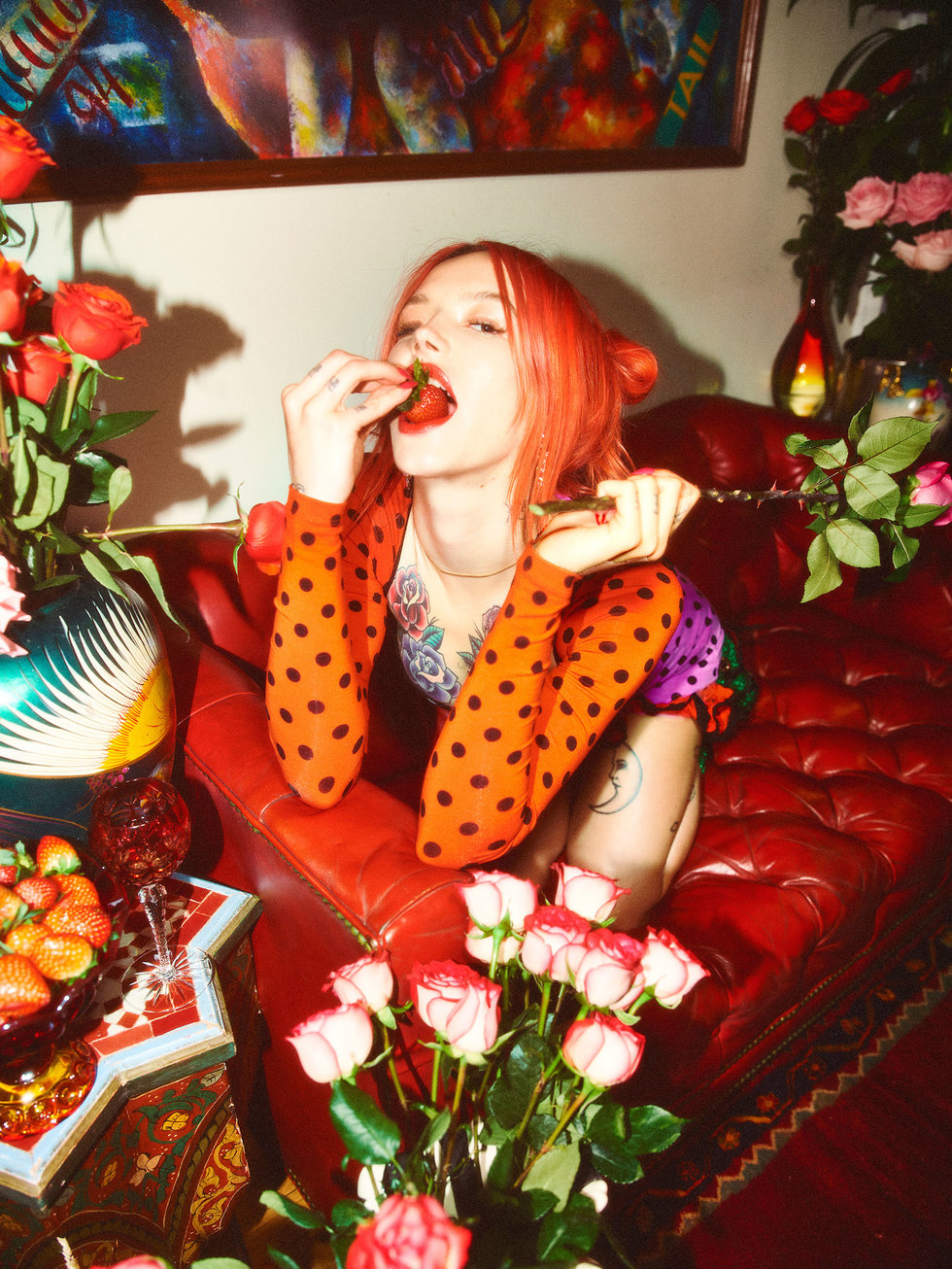 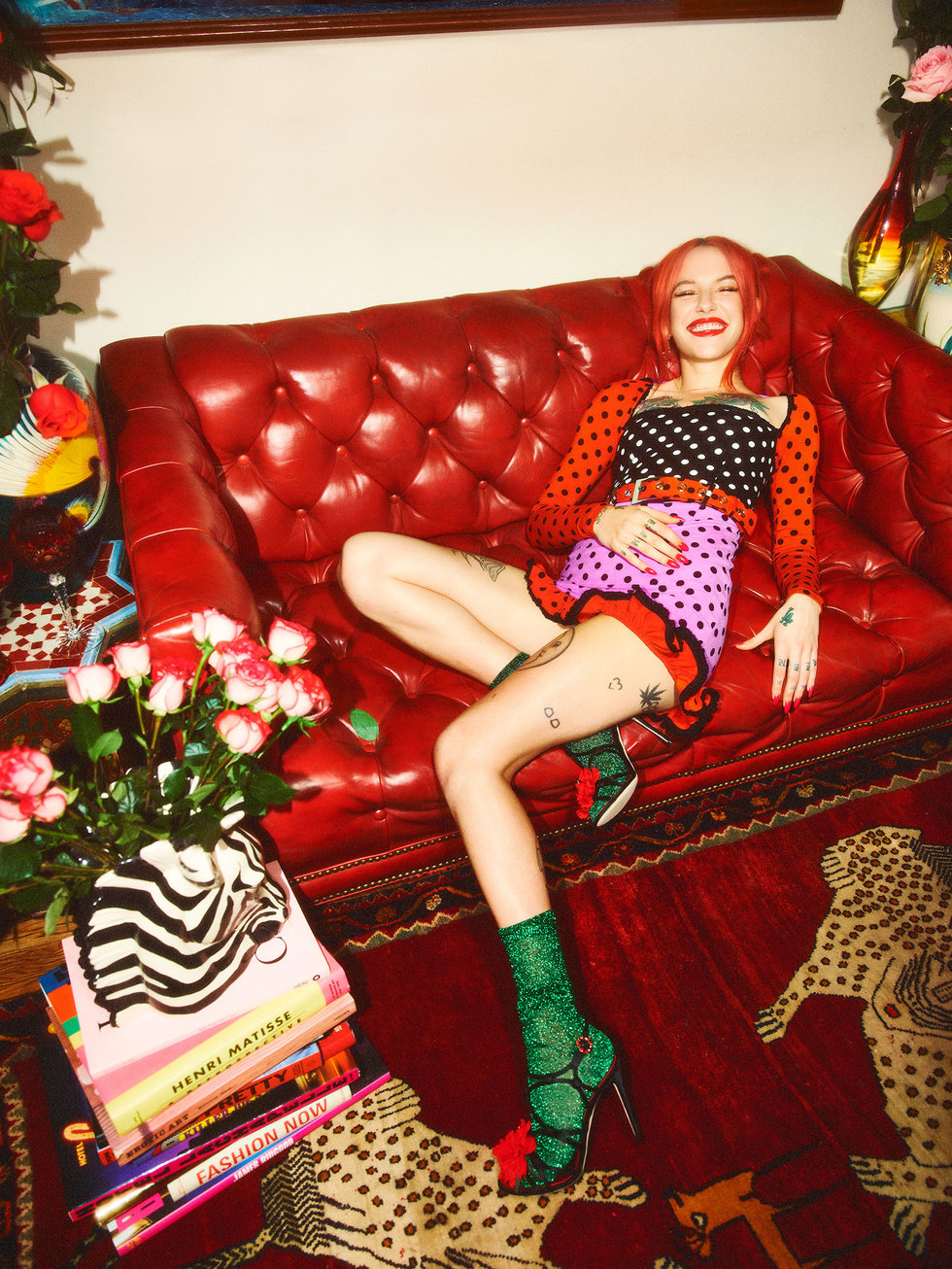 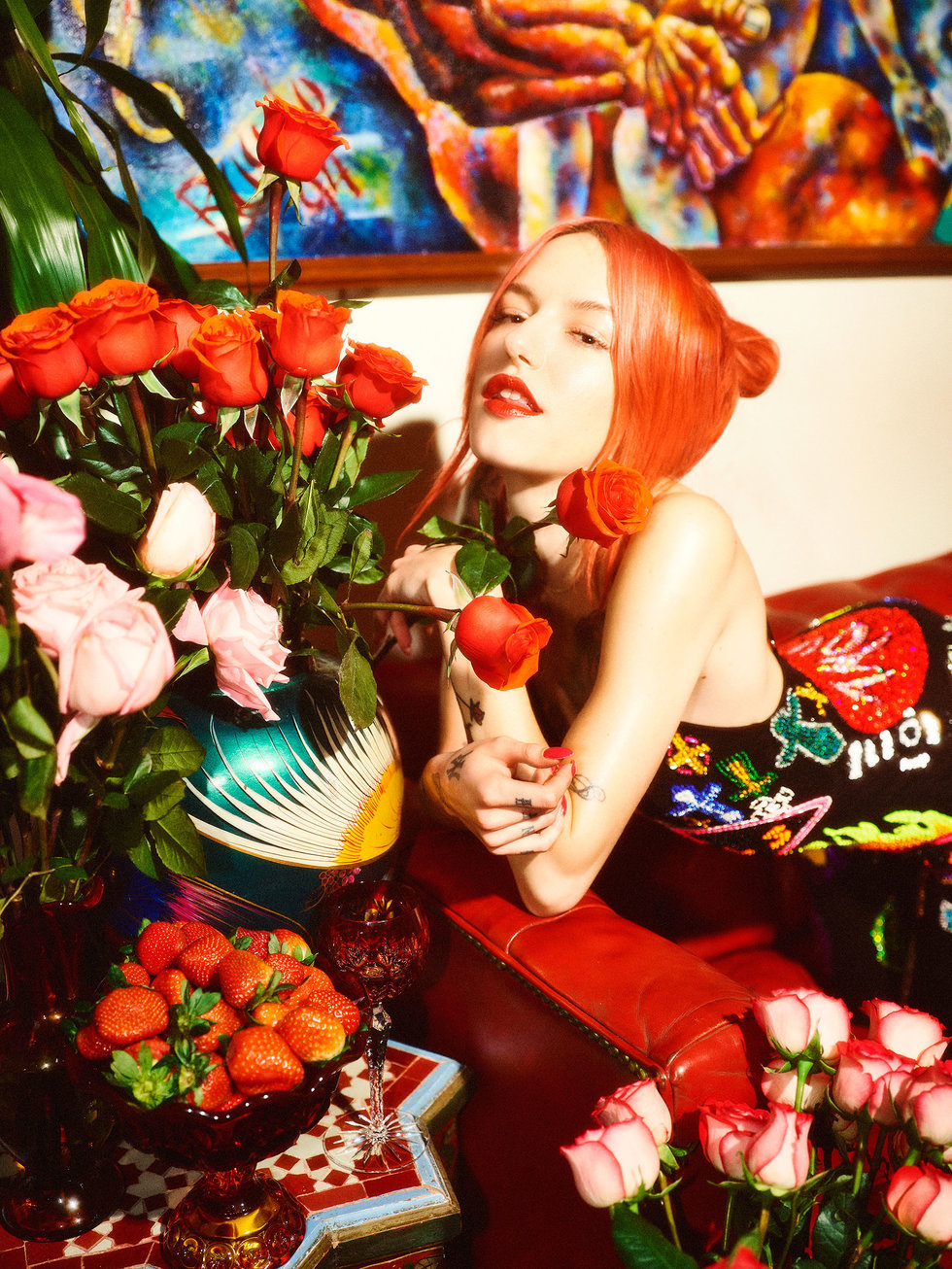 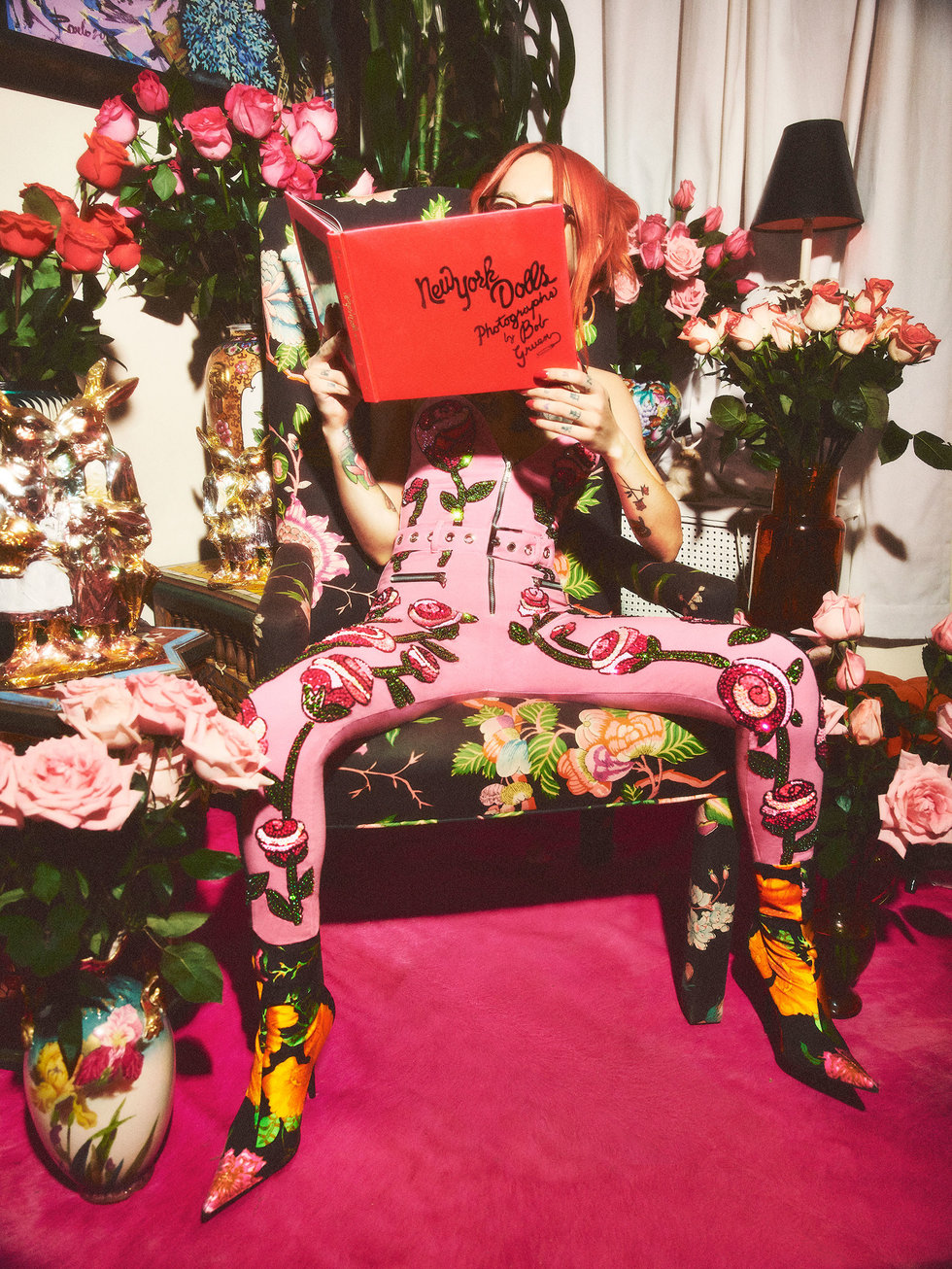 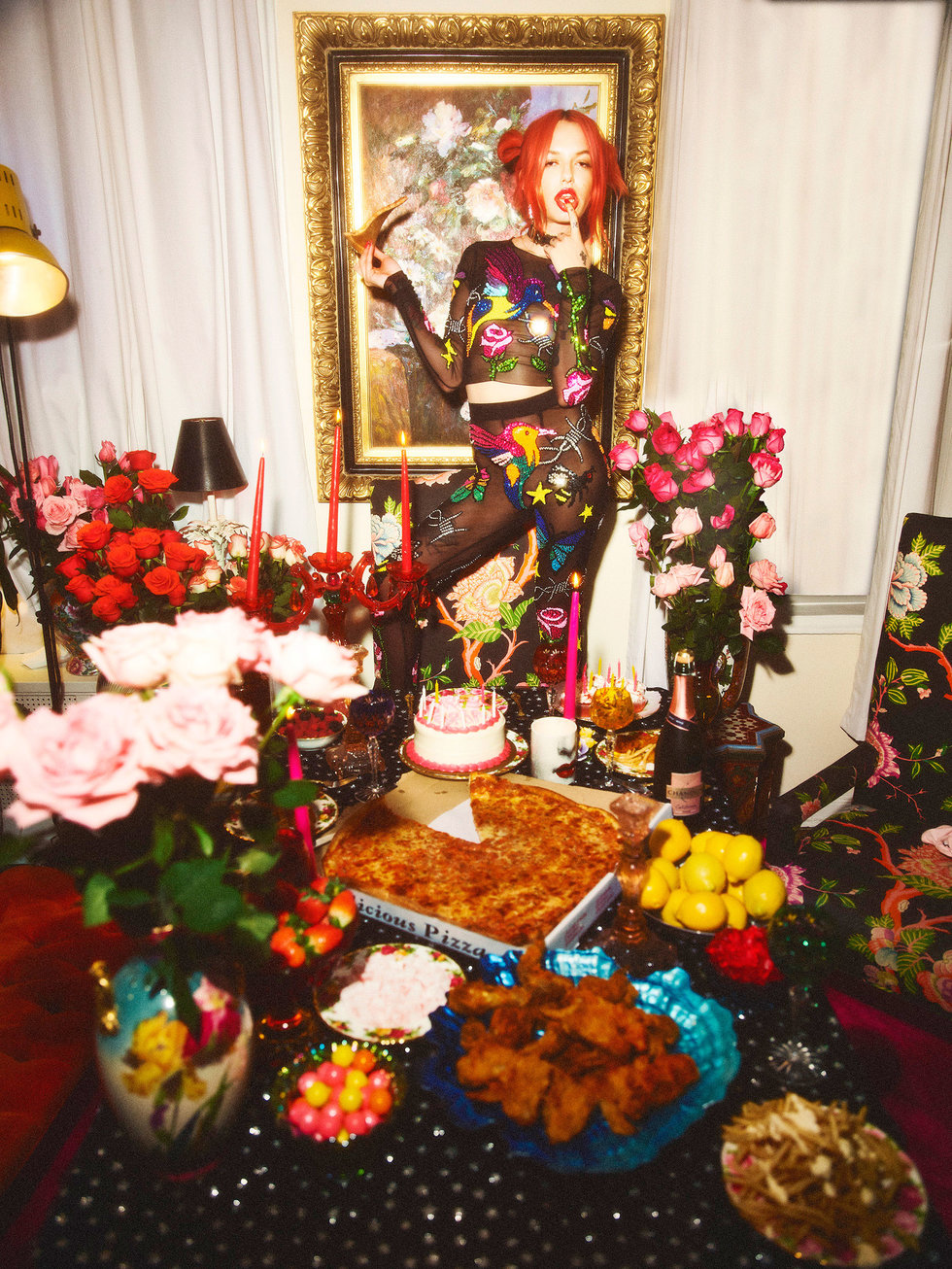 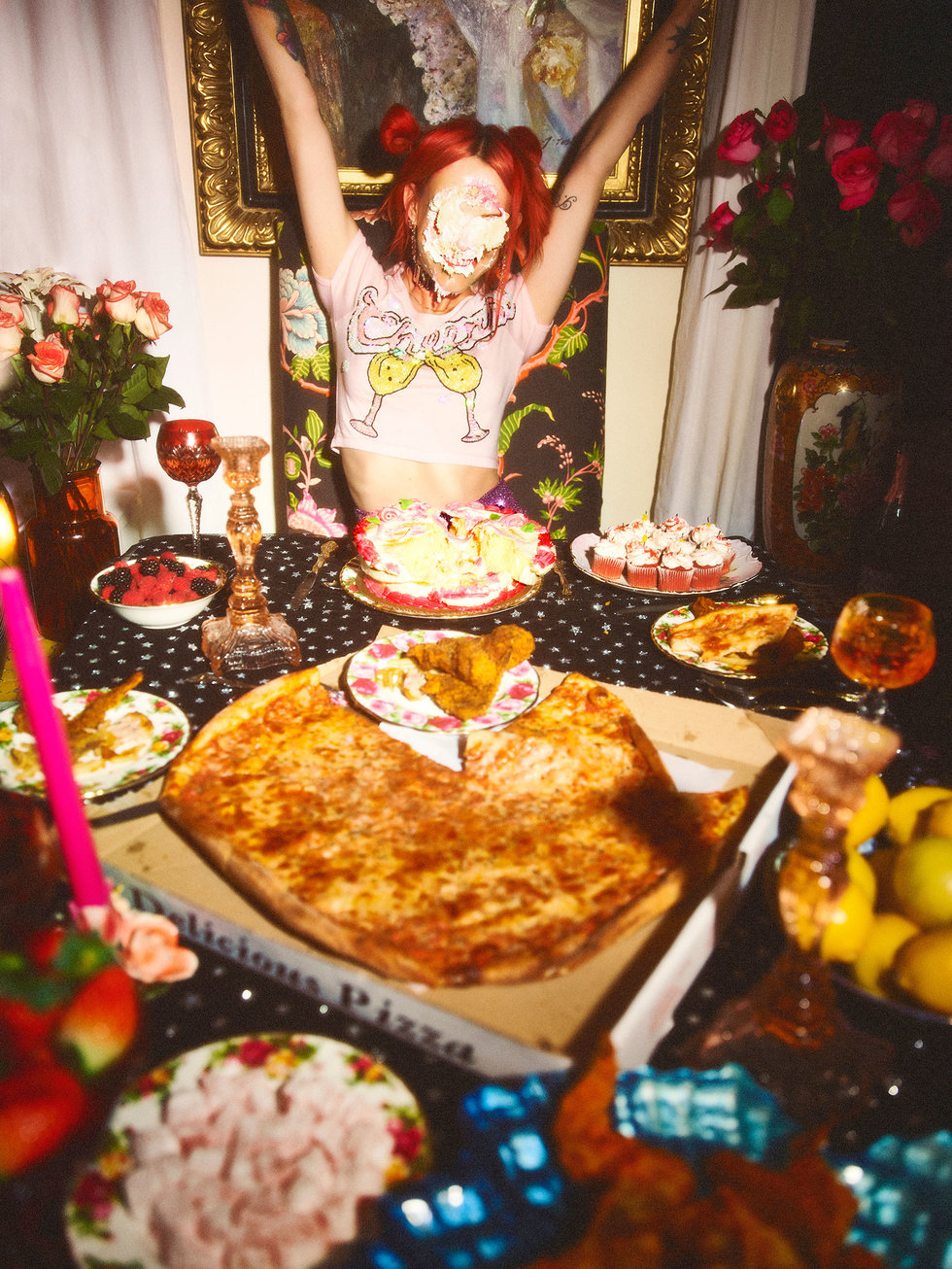 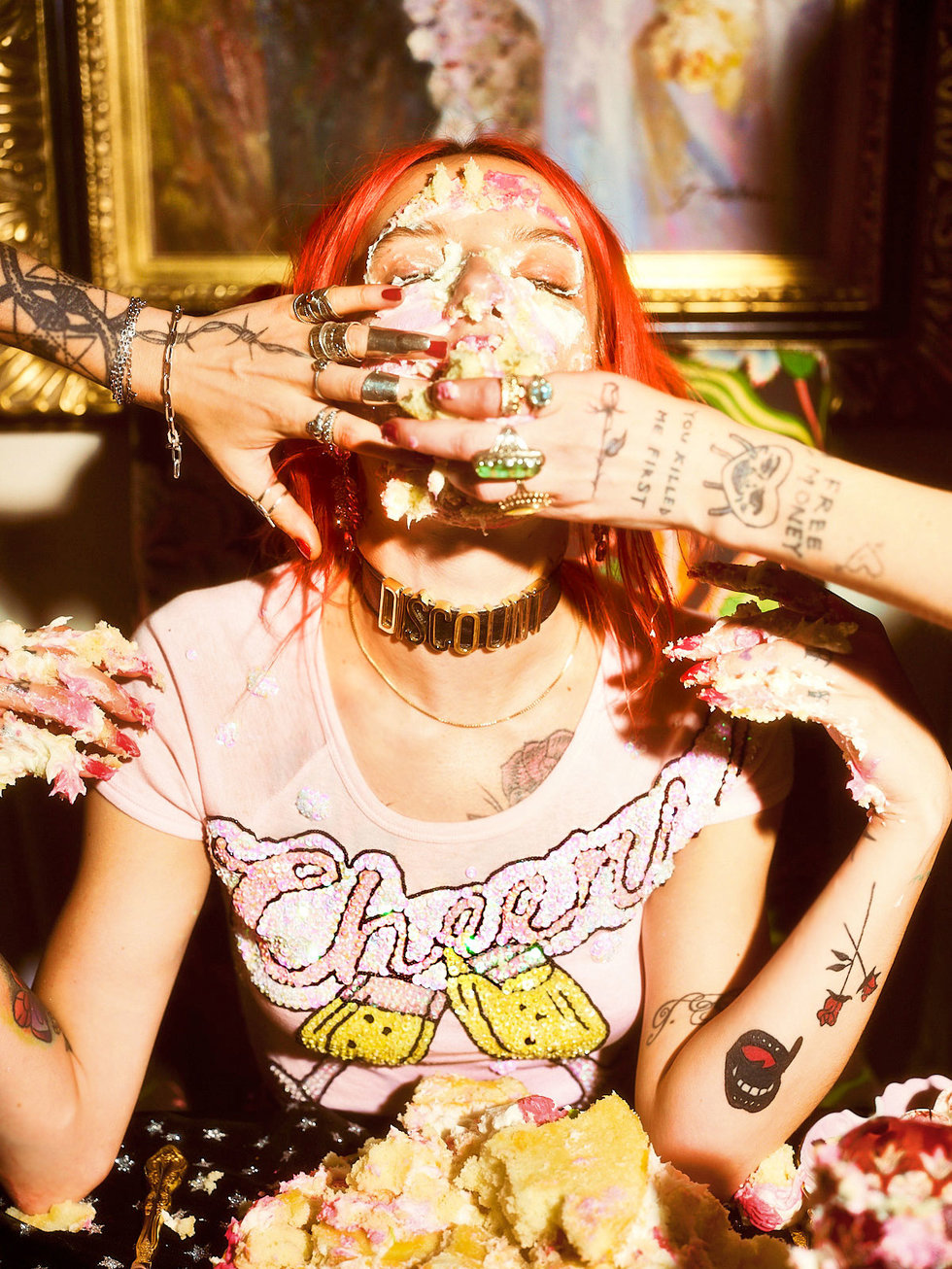 
The thing with that is, yeah, you could have fucked it up, but you nailed it. We know for a fact you work 14-15 hours days and it didn't happen by chance. Fine, you don't have acting experience, but shouldn't we be celebrating that you did an incredible job? For putting yourself in a situation that 99 percent of people could not pull off?

One of the craziest moments to me was not even being on set. It was doing a speech in Toronto in front of 300+ people — it's terrifying. In front of camera, you're in a scene, like, you can lose yourself in it and of course, retake. While standing on a platform in front of X amount of people was so crazy to me — every single time that I practiced, I stuttered. Then when I got on stage, I didn't. I called all my friends and was all, "I didn't stutter," and they were like, "Of course you didn't." Honestly, it's so incredible to have that support of people around me; they believe in me. They don't make my success out to be luck; they see me practicing and working it.

As young women in business, we are acutely aware of the emotional chaos and havoc that can be wrecked by the infamous "Imposter Syndrome" — that fear that someone is going to expose you as a fraud, or you don't deserve your achievements, even though you've forged your own path, and really have as much right as any to be where you are. It tends to be a product of an inability to internalize your successes. How do you deal with this?

I feel like every woman is somewhat conditioned to feel that way. I really respect every single person that has put in all the years of schooling and training for their career. I'm definitely considering [going back to school]. I wish I had known this was what I wanted to do before, but luckily I'm still 24. Sometimes when I get compliments about the film, I almost feel the need to diminish them or redirect them because I'm like, "Oh yes.. but..."

See even now! It's so easy to be self-deprecating — to default to reducing yourself or your work, but it really has long-term implications.

It's hard to go from no one really caring about you to everyone being like, "Oh my God, Bria!" It's just weird getting complimented all the time. Isn't it weird that it's actually more strange to have people come up to you and tell you nice things? It takes a while to get used to it or figure out a way to approach the whole [change] when nothing much has really changed on the inside, only outside.

Let's talk about role models. When your visibility increases in such a dramatic way, people tend to assume you have to take responsibility for how you impress upon other young women who might be struggling to get their break, or looking for someone to inspire them. Even though you may not represent the typical youth, you certainly represent a growing number. We feel like we are seeing a shift towards an alternative career path arch; more and more we see superstars getting their start on YouTube etc. In a way, this has been happening for a while, and yet you're still facing the challenges of the new frontier. To us your journey is just as valid as the next, but how do you feel about representing the vanguard?

My main goal is that I want to make an effort to inspire young women, and to show them that being yourself can actually get you really far. I want to show them that working hard on something that you love, even before it's making you money can still be so fulfilling.

If you had any advice for anyone out there that could be in a similar position to where you were not long ago, what would it be?

To really appreciate any platform or opportunity you may get, and when people see you being grateful, that's when things keep coming. The smallest things mean the world to me, and I don't think that'll ever change, which is why I hope my career will continue to grow. I don't believe in god, but I do believe that there is a higher power — Mother Nature or something in the earth that can feel your wants and desires, and when you believe in them is when you're really able to achieve them. I can barely sleep every night because I toss and turn, and I'm having these dreams where I see myself in these crazy situations living out my wildest dreams. I see it so vividly; I can just feel myself being there.

The power of manifestation. It's especially important to continue positive reinforcement when we are always overcoming challenges.

It's crazy hard to trust my intuition, but deep down, I do — I have to, you know?

Of course. You are challenged by just being a woman day-to-day, especially entering the industry at such a spectacularly charged time.

A lot of the scripts that I read, I'm like, "Really? Really?!" So many roles for women don't have substance, even still. I think that's what makes me so grateful that in The Florida Project (and my roles since then), I've been able to play characters that have such a broad range of emotion and depth. So many roles are the bimbo blonde girl or the cute girlfriend etc. I'm none of those roles. One of my biggest inspirations in general are women who make their own scripts. I read this article that Brit Marling wrote about her sexual assault with Harvey Weinstein; the way she articulated it was like, "If I had just been an actor instead of an actor/writer, I might not have left the hotel room." It just makes me so emotional. The fact that she was able to create her own scripts if he blacklisted her — create her own shows and roles and didn't have to rely on someone else, that's so powerful to me. "The part of me that walked out was the writer." I feel like that sparked such a big change in me because seeing these types of roles all the time, I'm like, you know what, if I had to wait forever, I'm willing to wait [for the right role], even if I have to fucking create it [Bria is crying at this point]. I'm such an emotional ass bitch [Laughs].

Loaded. We could talk about the issues with the role of women in film (and fashion for that matter) for hours. But let's swing it back to Bria for a minute. What's been your favorite failure thus far?

My favorite failure was school. I've always thought school is so important and that it should definitely be the main thing young people are focused on. But my whole [issue] was that I couldn't find a place to learn that was appropriate [to me], and that taught me in the way I was able to learn. I think it's really important to understand that not all people learn in the same way and I couldn't do it in an overcrowded 32+ kid classroom where people are throwing papers at each other, talking and passing notes — and that I'm [somehow] supposed to listen. I became aware that I couldn't learn that way. Instead, I used to read a book a week and I would teach myself. That was the biggest gift I think my mom ever gave me; she instilled in me a love of reading from a young age.

So important. Recognizing the need to educate yourself outside of the system at that age shows some pretty amazing initiative.

I'm like 9 or 10, and I'm standing in front of a bookshelf and I'm so happy. Under every book was a number and a different color – I had them categorized. I'd read a book a week and write my mom a book report.

Surely you're interest in that would funnel into your capacity to be a great actress, in relation to narrative and a thirst for adventure — a great resource for your career to draw on.

Yeah. And you know, what's crazy too is I feel like because written word means so much to me, when I read The Florida Project script, I cried. That's how I knew I needed to do it.

Ok so, what book would you most gift others then?

I feel corny saying it, but The Alchemist by Paulo Coelho. I feel like it's one of those books that no matter what point you're at in your life, you could always draw something different [from it]. Sometimes the words just hit me so hard that I have to put it down and try to take it all in because it touches me on so many levels.

Should we start a book club?

Yes! Can we? Oh also, you have put in Augusten Burroughs' This Is How. He's my favorite author. I feel like books are so important for mental health, offering a new perspective on something and making you feel you are represented. There are chapters in there that changed my life.

The Lovers Dictionary - A Novel by David Levithan

Literally Show Me a Healthy Person by Darcie Wilder

We Are Never Meeting in Real Life by Samantha Irby