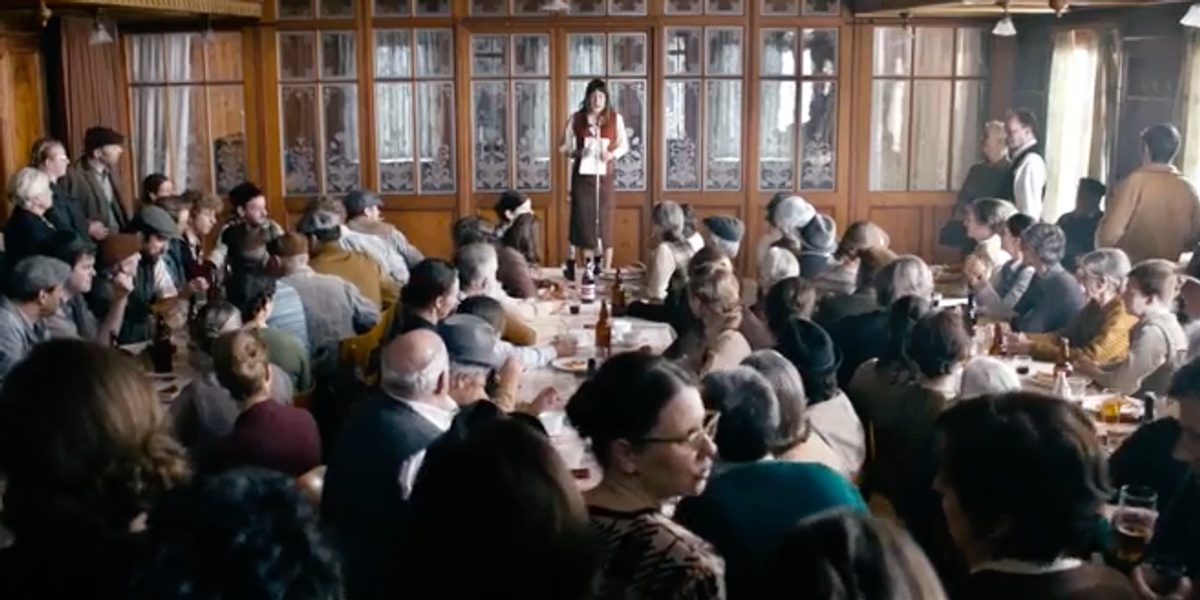 Director Petra Volpe on The Divine Order, Women's Suffrage, and Why the Patriarchy Is Bad for Men

The Swiss film The Divine Order dives headfirst into the battle of Swiss women in 1971 to get the right to vote. The film follows Nora, a middle aged mother and housewife living in a conservative village in Switzerland who becomes a target after she publicly supports women's suffrage. Nora deals with backlash from her neighbors and husband Hans as she gathers a faction of women to fight for their rights. We sat down with director Petra Volpe to talk about Swiss women's push for suffrage, recreating the '70s on a tight budget, and why the patriarchy is bad for men, too.

I saw the film and I cried at the ending so much. Each character made me feel like I had known them forever so those emotions were an instant reaction.

That's a big compliment. A lot of people cry and a lot of men do. Older men have come to me and said, "I never cry but I cried at this movie." It's such a huge compliment and I think that because the movie doesn't attack them, it shows how they're also victims of patriarchy, how they're also in a prison due to this idea of who they have to be as men. It gives them the possibility to feel something about injustice. So that's a huge compliment when people cry.

Can you talk a little bit about The Divine Order and how you approached it?

At the beginning of this project there was long research, because I realized that I hardly knew anything about the women's movement in Switzerland. No one learns about this in school. We know that women got the right to vote in '71, but you never really learn anything about it. We don't know anything about a one-hundred-year-old history of women fighting for this. They brought it to the ballot for the first time in 1959. Switzerland is a direct democracy, so men have to vote on it and they struck it down. Sixty percent of men were against it, so it was a huge defeat for women. Here [in America] women got the right to vote in 1920, all of the European countries around it already had the right to vote. In '59 it was already so late and they didn't get it. They had to fight for another twelve years until they brought it to the ballots again and could vote on it. It was a struggle. They fought and they were just ignored. In 1971 it was internationality so embarrassing for Switzerland, such an embarrassing fact that it was very bad for their image.

In one point of the film where the women left their homes to go one strike, it reminded me of a day without women, where earlier in the year women in the US went on strike for a day. In my opinion, the film mirrors what's going on in our society today to an extent. Would you agree?

Yes. The film has become so eerily timely because of all the stuff that's going on because of Trump and Harvey Weinstein. Women have to fight for their basic rights again. They're little by little taken away by this administration. Also in Europe, there's this tendency that politics shift more and more to the right and there are new conservatives. They're always going after the rights of women, migrants, and of the weak elements in society. We can't just look at it and say this is history; all of the stuff is swirling around again.

The women in the film did become victorious towards the end after the fighting they had to do. Do you feel like with what's going on today that its going to be the same conclusion as the film?

I think what you're seeing now is very similar. We see a lot of civil courage. This film is also a film about the civil courage of the individual in society, the individual who stands up and says I'm not taking this shit anymore, and we see people who are doing that here. What we see today is that women aren't being treated as subjects but only as objects. Even though a lot of laws changed and a lot of things got better, underneath there's a huge and very deep sexism and it's still ruling the world. We see Rose McGowan, who came out [about being raped by Harvey Weinstein], and now all these women who gather around her in solidarity. Film directors who are saying we're not taking this kind of sexism anymore in Hollywood. We see a system and we see the rebels. In a way the film is looking back at a moment in time and history, but I also wanted to make a movie that celebrates the power and strength of a single voice who rises up against something.

What was the production phases of this film like?

The production phases were quite tough because we didn't have a lot of money and it's a historical film. The film costs $3.2 million, which everybody here in America says you wouldn't be able to make an historical film for that amount. I had the most fantastic team. There's a lot of women: my director of photography is a woman, my set designer is a woman, my composer was a woman, my costume designer's a woman. We started three years ago to prepare the movie because we knew that we had to be ultra-creative in order to work with the little money that we had. We really researched and we had thousands of pictures to really find out how these times looked. We really wanted to recreate '71 in Switzerland and not make a stylized world. We realized when we looked at these pictures everything felt very oppressive.

We shot the movie in a little village in the most conservative part of Switzerland. There's one part of Switzerland where the woman got the right to vote in 1990. On the federal level, they got it in 1971, but all the little states also voted on it. One little state denied the right to vote for women until 1990. We went into this area to shoot the movie because I thought it would be a little revenge to go there with this story. The great thing was a lot of women who were in the movie, a lot of extras, they are really from there. They brought all that energy and also anger. They could be the rebels they couldn't be back then. That created another special atmosphere in the movie to have them on the set.

How was your film received in that small town located in Switzerland?

They loved it, especially the women. The women love it because it was a tribute to them and their struggles. Finally they saw themselves on the big screen. Even though it's the story of Nora, it's kind of compressed into three weeks in this village, it still gives tribute to all the women who dedicated their whole lives for women's rights and their right to vote. A lot of women took their granddaughters or their daughters and told them that they don't know what they went through, so come to the cinema with me and watch this.

One of the scenes that grabbed my attention was when the main character, Nora, stood in front of everyone in the town while giving a speech on why women should have the right to vote, and meanwhile her husband's in the back of the room while everyone is mocking her. At the point where someone hits Nora's face with a piece of balled up paper, her husband just stands there and doesn't do anything. I felt that hurt, sympathy, and compassion for her. Did you create Nora for other women to see themselves in her?

Yes, and also a piece of myself. We all know the moment we get ridiculed as women and we know that kind of betrayal. It's sometimes very subtle. There's women of all ages in my movie. Each of them -- like the sister in law who doesn't have a say in her daughter's life, or the old women who doesn't have any money because her husband has the financial power -- these were all realities for women. I can relate to their problems and I can relate to their sense of oppression and humiliation. I wanted to create three-dimensional characters that make you feel something. There's a difference in knowing about an injustice but to really feel something about it is different. It's our job as artists to create empathy. How to do that is something I'm still learning in my work.

How was the casting process?

I'm very diligent with casting and it was quite a long process. It was crucial to find the right ensemble of women who really work well together. It's not so easy in Switzerland because there aren't so many actors and actresses. For the role of the sister in law, Teresa the farmer, I saw every single woman in her age range and I just didn't find her forever. [Rachel Braunschweig] was a discovery for me and I trusted my intuition that she could do it even though her track record showed she didn't have big roles. Marie [Leuenberger, who played Nora] was just a gift from heaven. I had cast another woman for that role and she got pregnant. She would have been great but different. I had to do a recast and then Marie came. When I saw her I knew, this is my Nora and now I'm just happy and grateful that this intervention of the universe happened. Sometimes as a director you have to be lucky, be grateful of change, then adapt.