Thursday evening marked the NYC stop on the worldwide Diesel:U:Music tour to promote independent bands – and denim investment. Webster Hall played host to a wristband-bearing, jeans-sporting crowd of young folks hell-bent on making the most of their night out.

Complimentary cocktails abounded whilst confetti fell from above. The walls were lined with black and white photographs of artsy, still life images and crazy lasers cast trippy green and purple beams around the room. Strung from one of the balconies was a two-loop garland comprised of teddy bears. Onstage was where the real magic happened, complete with Webby’s nine-panel flat-screen display.

The charismatic London performed with Jesse Boykins III, a talented vocalist I’ve witnessed spit rhymes before with Brooklyn-based talent, Machinedrum. I snuck onstage for this portion, hanging back behind the equipment, stage-right. I was especially stoked to see Passion Pit, a quintet that’s received (and earned!) a lot of hype over the course of the past year and who, unfortunately, could dedicate no more than five minutes for a quick Q&A. But their set was spot on and included the essentials off their recent (amazing!) release, Manners (French Kiss, May 2009): “The Reeling,” “Let Your Love Grow Tall” and “Sleepyhead,” among other gems. Band originator and lyrical genius lead singer Michael Angelakos was something to behold, crouching over whilst tearing at his hair, crooning on the mic in his high-pitched falsetto. Whet my appetite for September 26th (and 25th) when they’ll be co-headlining with Phoenix in Central Park. Now that’s going to be good. (Sorry, kids, it’s sold out!)

There was a lot of waiting around, it seemed to me, but maybe I wasn’t intox enough. Despite a reporter’s impatience, the attendees seemed to be engrossed in the event, buzzing on free booze, bouncing blown up white beach balls, groups of friends dancing happily together. DJ Berrie filled the interims with everything from MSTRKRFT to MGMT, Bloody Beetroots to Bloc Party, Yeah Yeah Yeahs to Ol’ Dirty Bastard, 2 Pac to Biggie. The Ting Tings too! Yes, we got down to East and West, hip-hop, indie, techno, trance, dub-step, rock, pop and on and on. A seven-hour-eight-act lineup calls for an extensive and eclectic soundtrack, no? Props to Berrie for holding it down.

Cobra Starship made it onstage by midnight; “How the fuck are you guys doing?! Are you as drunk as we are?!” As drunk or drunker probably. Or flying high; this event was handcrafted for acid droppers. I was, alas, not one of them. But I did partake in the tequila shots making their way around the VIP area upstairs, courtesy of a balding man in a pinstriped seersucker blazer. Starship’s penultimate number was their catchy single “Good Girls Go Bad.” Too bad leading lady of this song, Leighton Meester, didn’t make an appearance. However, the night was rife with decent sightings. I had the good fortune of catching up with The Honorary Title’s main man Jarrod Gorbel, our fourth encounter to date (love him), as well as DJ Artie K and DJ Josh Madden. Beyond this, the memorable cameos occurred onstage, rather than amid listeners. Yes, the true special guests of the evening came complete with mic in hand.

Clipse entered around 12:35 and performed expected tracks, such as “Mr. Me Too” and “Keys Open Doors.” Then came “Kinda Like a Big Deal.” You better believe Kanye skipped out and rapped his part with the twosome. Yep, he’s surprise numero uno. The audience ate it up, sunglasses, purple nerd cardigan and all. You could say it was kinda, like, a big deal. Everyone watching had arms in the air throughout their stage session and this just topped it off.

Next up, The Roots took over, at about 1:35 a.m. Damn “school” night too! I had Friday off work but have to wonder how some made it out alive. Especially considering the performance in store. The Roots are revered, definitely, not entirely my cup of tea, but respectable and admirable nonetheless. Forgive me if my true love of their 40-minute-plus set was surprise numero dos, Swedish sensation Lykke Li I was floored by this slick and smart maneuver on behalf of Diesel. So sick! She performed “Little Bit,” “Dance Dance Dance” and the most amazing live remix, “I’m Good I’m Gone” meets “The Seed 2.0.” And, the girl got goofy too, beating all the different drums onstage like a cave lady on crack. And that’s a good thing. She even hit the ground with her sticks, content to just simply make a little extra racket. So much fun with her long locks and silver, reflective shirt. What a treat! Definitely the highlight of my night.

After pretty thang exited, I figured the evening probably couldn’t get any better than this, unless they brought out goddamn Madonna, so I made a beeline for the door myself. It was a little after 2 a.m. and the place was still lively. Overall, the event proved a success, in my eyes, and a genius means of advertising jeans – and music. Oh, and I wear a size 4; please send a lifelong supply of pants without delay. Thanks, Diesel. 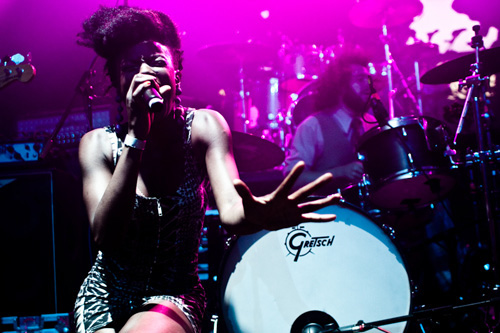 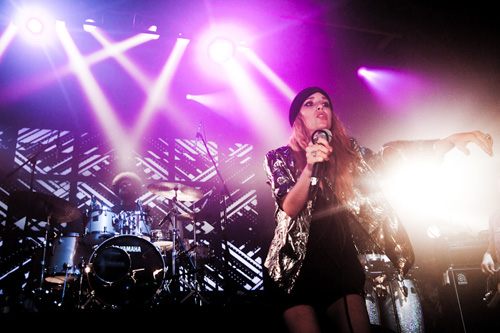 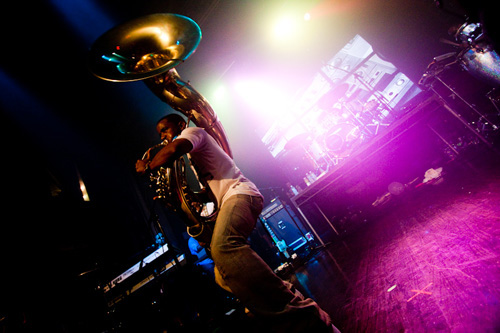 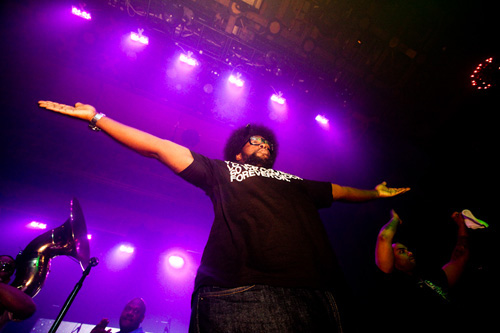 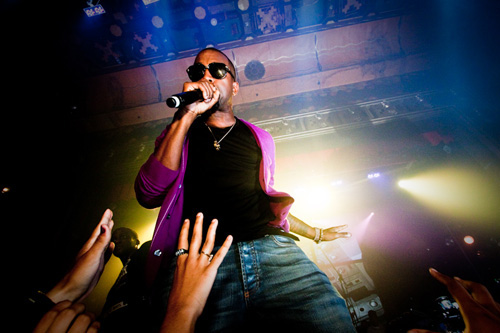 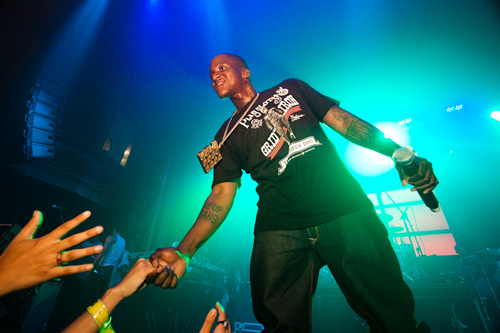 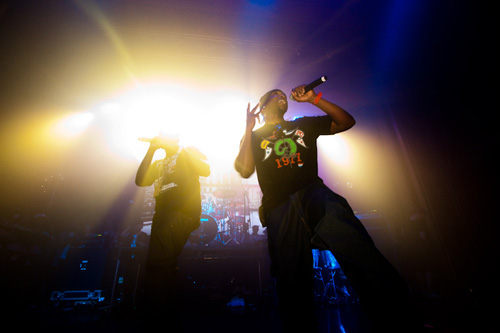 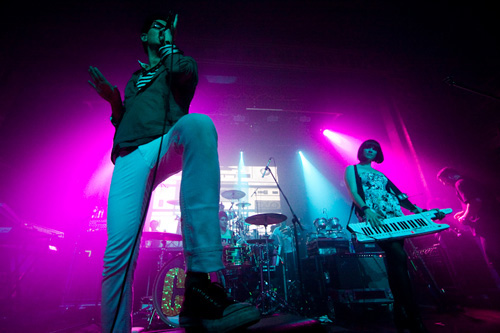 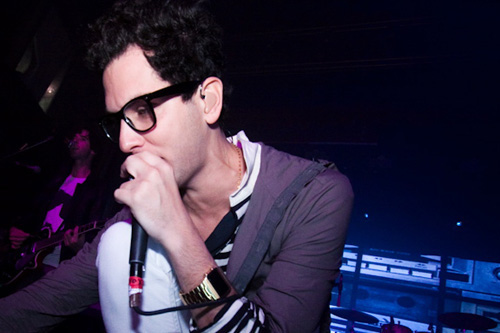 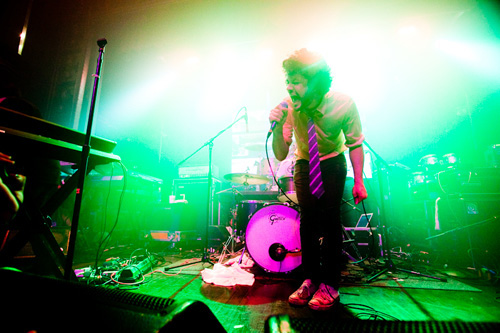 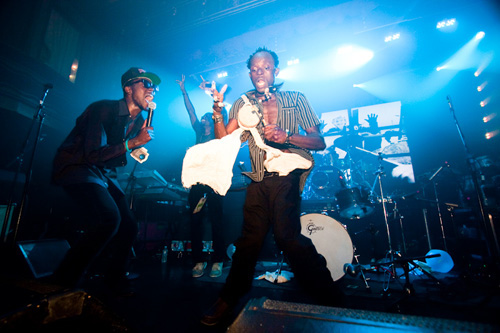 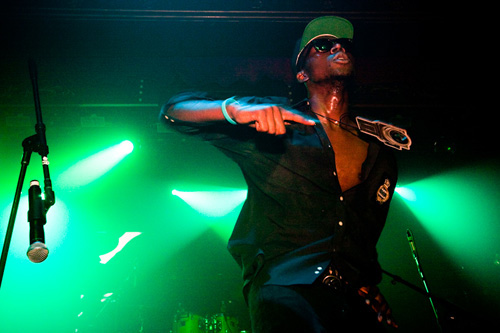 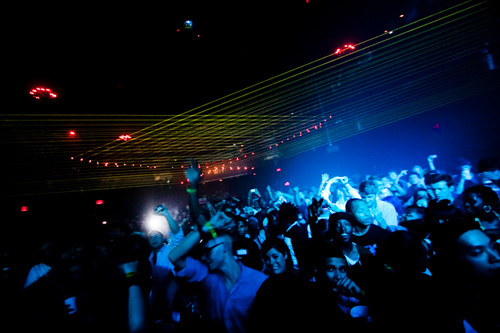 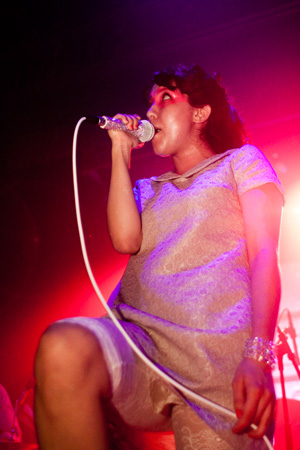