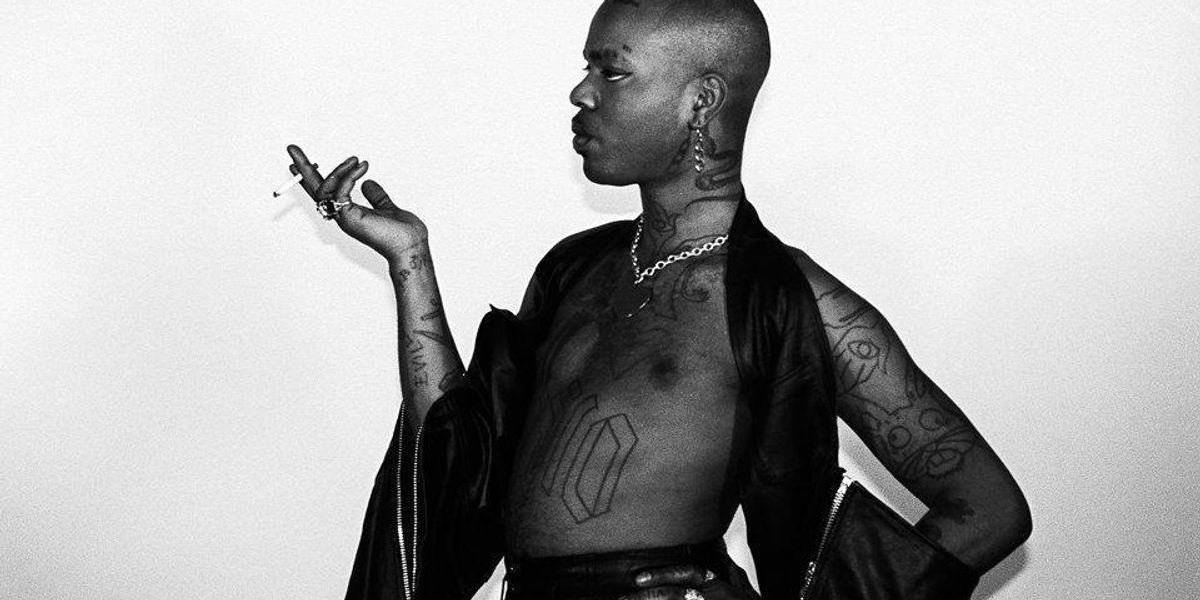 Last month saw the release of "KLLN KNTS," a ferocious track from Dick Van Dick with an accompanying video that featured the rising rapper strutting around Manhattan's Chinatown in an assortment of furs and BDSM-inspired masks. We were instantly in love. Eager to learn more about the enigmatic man voguing behind the leather mask, we met up with Van Dick for a few drinks at Union Pool (which he aptly described as "real Tinder for straight people") to discuss respectability politics, miniskirts and his Matrixxman-produced foray into the queer rap scene.

Very little comes up in a Google search for you.


Oh yeah, I'm a ghost in that sense. It's because I'm a very IRL entity, you know? I exist in the real world and I go to real parties. I'm out and about but I have very little of myself invested in the internet insofar as I don't have Twitter or anything.

An anomaly in this day and age, for sure. Then again, your entire performance is pretty expectation-defying -- just watching the video for "KLLN KNTS" is an experience.

That's always been part of the performance art. I'm from San Francisco...I grew up [in the Bay Area] and you know, being a weirdo is just, you know, what I grew up with. I came up in the scene with [agender performance artist] Boychild and an awesome drag scene.

You just hosted a GHE20G0TH1K party with Boychild, right?

Yeah, we go way back. I used to make their costumes and like those masks and shit. I make all that stuff.

So were the pieces in your "KLLN KNTS" video of your own creation?

Absolutely. Well, not every part of them but the masks were all me. The claw gloves, that's all me. I love puppy masks -- you have no peripheral vision and, you know, that's part of the S & M power-play of it. You can't see shit when you wear the mast -- you really have to trust whoever is around you. In my case, I have to trust the people of Chinatown who I love and hold dear. I was never in any danger. It was cool. There was a shot of a guy bowing down to me and, you know, just us being crazy-ass New Yorkers. I guess crazy attracts crazy. But the people of Chinatown are also just so not bothered. They're just like "Ok, yeah." The lady who sells cigarettes in the LES, you know her? She goes from bar to bar -- that's my home girl. And she's just like totally not impressed. She just talks to me like -- whatever.

Yeah, but that's crazy that you just felt comfortable enough to wander around it an outfit like that. I don't think I could pull off something like that.

Walk around in a miniskirt and 5-inch pumps? I don't know, I also wear a lot of skirts and dresses just in my day-to-day life. Some people are noticeably affected and other people aren't. But it's always immigrants who don't care -- we're both like 'I'm wearing a long skirt right now, can we all calm down?'

Have you always wanted to rap, or do you fancy yourself more of a performance artist in the general sense of the word?


I mean, I've got my fingers in a lot of different pies but the important thing for me is just to create whatever. So a lot of people have these leather pieces I've been making lately -- like a 12-foot braided-leather rope to wear as a necklace. I'm a crafty bitch. So I'm out here always making and always producing something -- writing songs for other people, too. Half of the songs I write, I don't even intend to do myself. I just write them.

So are you a producer as well?

No, I didn't mean it like that. The one thing I physically do not do well is produce beats. [Music software program] Reason and I -- we just don't get along. My brain just doesn't work that way. I miss GarageBand...I want something with an interface like GarageBand, because I'm very visual. It's easier for me to just conceptualize. But I'm always present in the studio. Like the Matrixxman stuff that people know me for, those songs are all produced by him with me sitting in the studio, being like "no," "mhmm," "uh huh," singing and backseat driving.

That's another question I had in mind -- how'd you get hooked up with a big name like Matrixxman?

He's one of my homies from San Fransisco. He's like a techno god now, but he was just one of those SF homies who was always around. We were always running into each other.

"KLLN KNTS" has been described as a subversive nursery rhyme. Was that style intentional?


Yeah. That song is done in one cadence -- the flow doesn't change, sort of like a lullaby. But that wasn't intentional. It kind of came out like that. I know it's a little bit cliche, but you feel like the music writes itself. I move from idea to idea pretty fluidly, so the last phrase of one couplet just gave birth to the beginning of the next one. It's this very stream of consciousness way that I write -- it's very rare for me to tell a direct story. I'm just not that kind of musician.

[Other queer rappers, yeah.] There's definitely a little bit of that ballroom aspect -- like the way you talk, and commentating -- that creeps into it. There's also Southern influence, and I've been around the block, so there's hood influences.

Which also plays back into ballroom culture.

Of course, but also plays into [the Chinese culture I grew up with]. In San Francisco, I grew up with Chinese triads, like, "hood n*gga" Chinese people. Hood Chinese kids out there, who say "n*gga" more than anyone else…

You never called them out on that? That sort of fucked up anti-blackness that can proliferate itself in Asian culture?

Oh no, I am not on that side of that issue. I understand words and their intent and I don't have time to split hairs, and be offended by things that are obviously not meant offensively. If you grow up in the hood, you just hear this constantly, and it just becomes a part of how you speak. It's white kids, Latin kids, everyone I knew growing up in that kind of world. It's just how we talk. I didn't start saying "n*gga" until I was an adult, because before that I was just so put off by it as a kid -- growing up in private school and feeling like I just had to be this exemplary black person. But I got over all of that PC shit when I grew into myself.

This idea of the exemplary black person, does that still have a effect on your work now?

I've definitely let my hair down as an adult. In the past ten years since I got out of high school, I've just come into myself in terms of my race, my gender, my sexuality. I've grown into myself, as we all have. But it's definitely colored who I am -- or affected who I am now, because I don't feel like I have anything to prove. Whereas, I used to have to lord my intellect over people because I felt looked down upon.

It's strange in the Bay Area too -- it's sort of like classist.. If you're not white, or you're not a certain type of Asian, you really have to work to prove yourself.

It's because there's like less of a black middle class over there. California is where the black middle class was severely eroded. There's a little more context for black people as being normal Americans [in the East and South]. Whereas growing up, I was just assumed to be hood -- assumed to be poor and ignorant -- and there were no Huxtables in my real life. I mean my family was part of that older guard of middle class, hardworking black people, but they still were poor. But we all spoke properly.

But what is really "proper?"