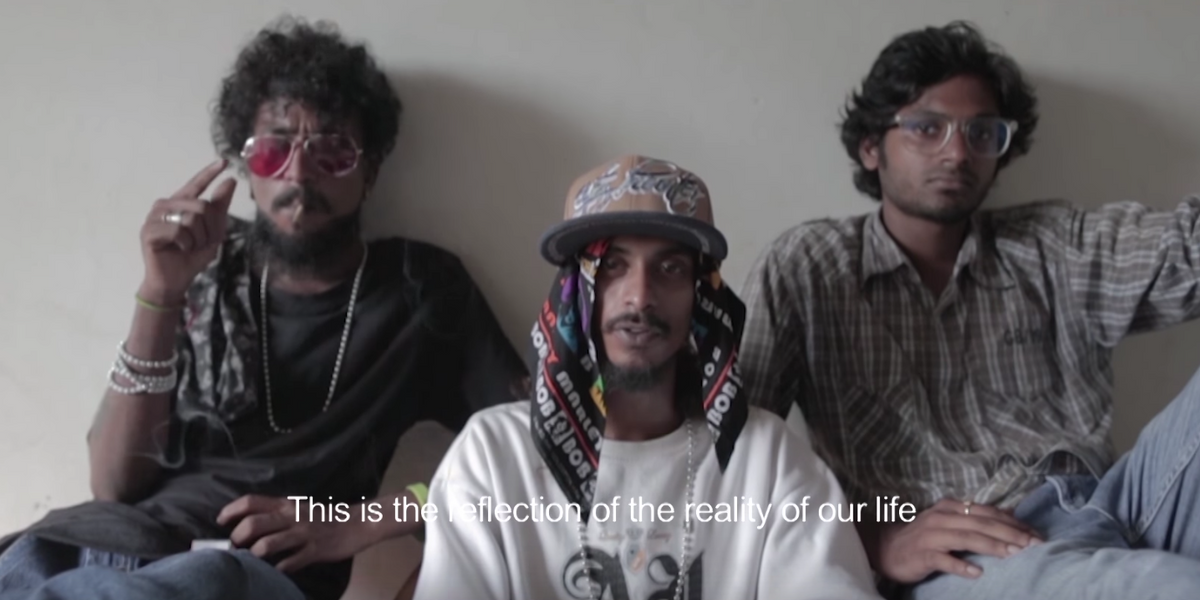 Filmmaker Sachin Pillai is known for his experimental music videos and cutting-edge documentary making. His film Dharavi Hustle captures life in Dharavi, one of the world's largest slums. It is located in Mumbai and is home to 1 million people across 500 acres. Within the slum, there is a widespread rap community that uses the art form to reflect on the conditions of their life there. They are inspired by the music of American artists like 50 Cent, Eminem, and Tupac, and dream of bringing an understanding of the importance of the art form to their community, saying, "Hip-hop has saved us from our failures."

Pillai interviewed members of the community about their witty lyricism, dance culture, how they try to get their message out to the world, and the importance of representation in films like Slumdog Millionaire. We sat down to talk to Pillai about how he made the film, the gender politics in India's hip-hop scenes, and rapping in multiple languages.

Check out the conversation, and the documentary, below:

Tell us about the making of Dharavi Hustle. How did you find the rappers you feature and get access to them?

I'd known about the rap community in Dharavi for a while, and a few loosely-strung articles had already existed. A lot of this access however was planned out by journalist and executive producer, Bhanuj Kappal who already had direct connections into the community. Specifically with the Slumgods, since we had no money to offer them, I shot footage for a small crowd-funding video for them and in return they let us document them. Whereas with the Dopeadelicz and consequently the rap community, we immediately got along over some spliffs. They liked the way I was planning on approaching the film, so we just hung out and everything just happened quite organically.

It was probably the most fun I've ever had shooting any project.

Can you share a bit more about the hip-hop scene in Mumbai and India more broadly and not just within Dharavi? Is there infrastructure (record labels, concert promoters) around this world or is it mostly DIY?
The hip-hop scene as of now is undergoing the slow transition from being DIY to becoming a counter cultural movement. The fact is that the infrastructure in terms of music production and relevant equipment already exists in the city of Mumbai. Sadly though, this has mostly been inaccessible to rappers up until now.

Several people have tried rapping in India before, but they were never really able to achieve the finesse that their counterparts in the US displayed so naturally. Hip-hop only truly became special in the slums because rappers from there were talking about real issues and things that happened in their neighbourhood. So even though their craft was still unrefined, their music was talking about things everyone already knew, being spoken in a whole new way. That's what I feel got people to listen.

After meeting the Dharavi rappers, was there anything that surprised you about them or that you learned?
The one thing that nagged me about the whole scene was the lack of B-girls or female rappers. I felt that perhaps underneath all of the progressive thinking that came with Hip-hop culture, perhaps there was still some misogyny, which has always been a looming dark shadow in Indian society.

I was very happy to find out that this wasn't the case at all. There were two B-girls that I'd met on the last night of the cypher who had just started to take their lessons and it was clear that the boys were actually a bit extra respectful as they understood that the girls probably had their initial apprehensions.

Besides this, I was also very impressed by how the guys were producing their music through archaic lenovo laptops and how a lack of resource, rather than be a weakness, has became a source of strength and an enzyme for ingenuity.

What kind of connection do you think the rappers in Dharavi feel with American rappers? They spoke a bit about the struggles in American inner cities and the relationship between those struggles and their own lives - to what extent did you find the Dharavi rappers wanting to emulate American rappers versus create their own genre?
Where the American connection is concerned, I feel like the guys here relate with the same sense of struggle and lack of resource. The sense of being sidelined and looked at as less capable. I think the emulation as of now is a way to teach themselves, almost as if they are picking up lessons, and new modes of expression.

Having said that, a lot of the rap is now being written in Hindi, Tamil, Malayalam, Bengali as well as Marathi - so one could say an original genre is beginning to form and although a lot of it is still juvenile and sometimes even just pretentious (in the case of some artists who are currently being heard), there is a lot of it, which is socio-political, socio-economic and overall dissentive.

Thus I think the eventual evolution will be a genre that we can say has Indian influences, although at its core it will always be hip-hop which is fundamentally African - American.

How familiar are the Dharavi rappers with the rap scene in other places (whether America, U.K., S. Korea) and elsewhere? How familiar are they with rap's history?
I would say the rappers in Dharavi are pretty well researched as they've all taken to the Internet in a big way. Especially with the advent and affordability of the smartphone.

Is there much support or interest from young people in general towards hip-hop? What about towards the scene in Dharavi? Could there ever be a situation (like there is in the States) where one of these young rappers gets 'discovered' by a record label in India? Or is it very separate from what is happening in the Indian music industry?
Hip-hop has become somewhat of a means of communication between economic classes that would have otherwise not mingled. Among young music listeners, it is always refreshing to hear new genres, and if a rapper is good at what he or she does, they will definitely be heard, whether it be through YouTube or SoundCloud or a platform like Apple Music. India is a country of many issues and problems, so if one were to really get into it, you could never really run out of things to rap about and no one would really get tired of listening.

Where the question of a record label picking up artists is concerned, this is already happening. Independent music as a genre is rapidly gaining an audience that now wants to hear things other than Bollywood. More and more people are getting disillusioned and generally tired of the constant recycling and repetition of stereotypes that currently defines much of the commercial iIndian music industry.]

Currently it can be said that the independent music scene in India is at a flourishing stage. Within a 10 kilometer radius of where I am sitting right now, there are at least 50 to 100 great musicians, recognized and unrecognized, that are experimenting across genres ranging from jazz to rock and roll to electronica to experimental binaural soundscapes.

Personally speaking, living in a city like Mumbai and judging solely by my peers and the influences available to me, especially with the Internet, I feel like we are all a part of a larger international community. We all have the same convictions, motivations and dreams, where borders and differences are being blurred away by the free flowing nature of communication, One that exists in a place far beyond socio-economic disparity, colour, caste or creed.