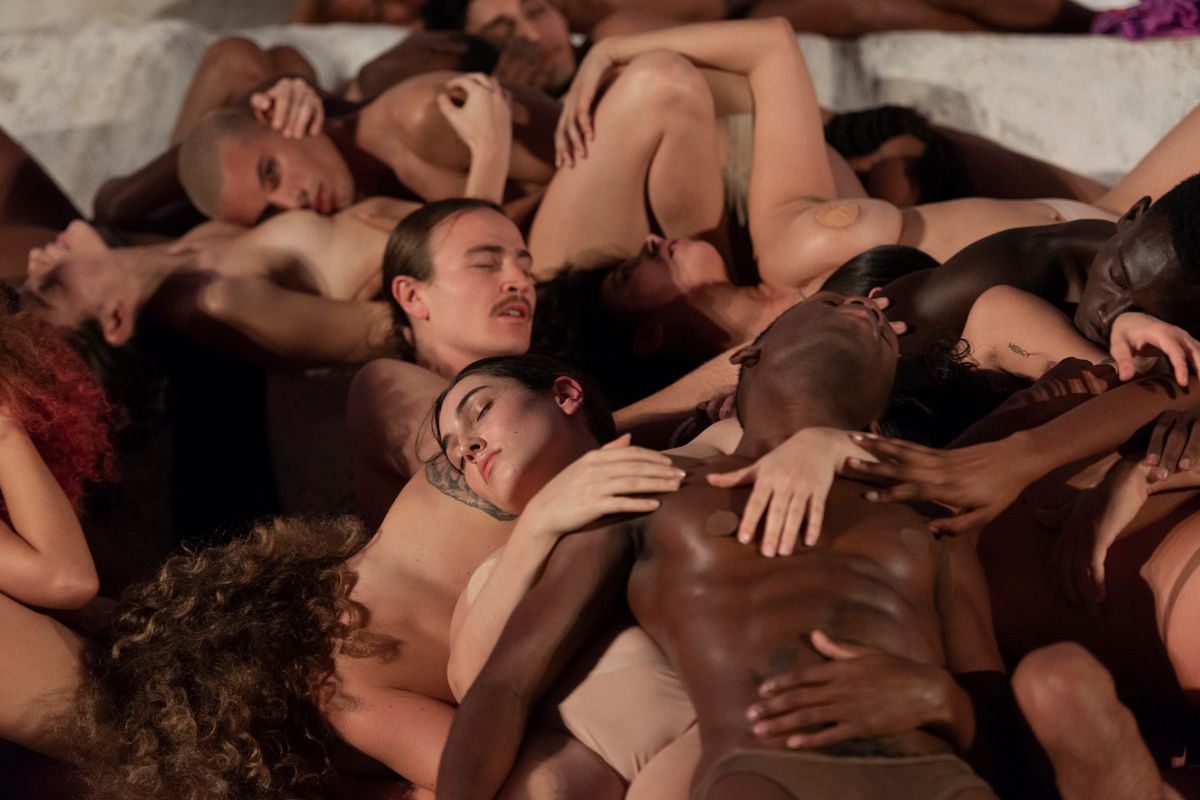 As a brand and in its clothes, Desigual has never shied away from vibrant colors, optimistic messaging, or freedom of self-expression. At this year's edition of Miami Art Basel, the Spanish label unloosened even more buttons with a couple events highlighting its playful approach to sexuality. The events were part of a Desigual campaign called #MiamiLovesDifferent, aimed to celebrate style, love, and sex in its numerous facets. Here's what went down:

Related | The Black Artists You Should Know at Basel

Spanish artist Miranda Makaroff and Desigual share a native home base in Barcelona, so their partnership is a seamless one. Makaroff drew on her endless love of pleasure to create a Spring 2020 capsule collection for the brand, teasing it out through technicolor renderings of the human form, contorted in sexual positions, depicted in various states of undress. (Some of Makaroff's figures on the clothes wore pasties and flowing mermaid tresses.) The collection was unveiled on December 4 during an exclusive outdoor event at South Beach's iconic Nautilus, where guests sipped specialty cocktails and danced to a mix of reggaeton, bachata, and salsa tunes spun by DJ Pascal Moscheni.

Makaroff's art imagines "a universe where women live as one with nature, in the heart of a Mediterranean island." Translated to the collection, this means animations of women, and other genderless forms intertwined and separating, dancing and loving on wide-leg trousers, tees, sundresses, and handbags. Performer Juno Birch and a blonde pixie-coiffed Jazzelle Zanaughtti (@Uglyworldwide) was one of several models and influencers present donning the pieces and posing for photos.

A couple days later, Desigual transformed an iconic art deco venue, The Temple House, partially into a showroom of diverse styles for 2020. (Aside from their Makaroff capsule, the brand is entering the new decade forgoing trend-centered collections based on the weather; "We are floaty dresses in January or June," they say.) But then downstairs, after guests browsed the collection, sipped cocktails, and mingled with Desigual-styled famouses like Mykki Blanco, the space became a red-light special. Up to 400 invited Art Basel attendees were urged to put on white paper jumpsuits over their evening looks so as to blend in, and ushered to a room partitioned off by a giant curtain. Behind the curtain were two gigantic replicas of stone statues toward the back of the room, and guests filed behind velvet ropes, clearing a path for a runway. Ambient music filled the space and the red lights made way for bright ones to shine.

A group of ethnically-and-size-diverse models wearing Desigual's 2020 collection marched down the runway barefoot, then sashayed to and fro, performing fluid choreography with one another, before perching atop the statues. This was a planned effort helmed by Catalan artist Carlota Guerrero, whose creative direction on Solange's A Seat at the Table and When I Get Home helped solidify her as a viable visual artist.

Lola Leon, Madonna's daughter, was a surprise addition to the group, performing an elaborate routine as the final model to ascend to her place among the others. Once all 30 models assumed their positions atop the statues, they wove a ritualistic circle around two of them, who slowly stripped off their clothes, leaving only pasties and sheer underwear left. Then, they assembled in pairs of two (or three or four), and began an enticing seduction of each other and a captive audience, who were no longer crowding behind velvet ropes blocking off the runway, but facing the action head-on. It was slow and methodical. First, in an embrace, then a kiss, then consensual removal of one another's clothes. Then, legs spread apart, mouths agape, hands on backs, they writhed together as separate bodies into one, serpentine and scandalously sensual. Later, Black Madonna DJ'd as guests blew off steam from the night's performance.

"This is the first representation of what Love Different means to us," Desigual says. "An iconic performance filled with emotions and sexual energy with a universal language... the kiss." Touche!