Carissa Ackerman is a living doll.

A visual cross between actress Lou Doillon (Jane Birkin's daughter) and Pia Zadora (the cutie-pie singer who married an old billionaire in the '80s), the adorable blond designer, accompanied by her boyfriend Ariel Chriquy, just moved her trunks and cats from Chinatown to Williamsburg.

"I am so happy!" Carissa exclaims at our latest visit, "I really wanted a storefront so that my clients wouldn't have to walk up five floors while smelling Chinese cuisine." Having finally relocated to a loft-like boutique (and living quarters) the color of mint chewing gum on Brooklyn's Grand Street, Carissa is in heaven. Celebrated primarily for her customized vintage fashions, the pint-sized artist and rock climber has also made her mark on the fashion catalog scene: her home-made Mandate of Heaven catalogs are a real hit with her devoted shoppers, and she passes them around like little bonbons. Held together by a pink or green velvet ribbon, those little delightful line books feature the Lolita-esque Carissa and a bunch of her sexy girlfriends modeling the girly apparel Carissa loves to design. "My pieces manipulate and highlight everything that is charming about females," she says.

A vintage clothing fanatic since her early days growing up in Florida, it's via experimentation while playing dress up with her photographer friend Nick Olsen - with whom she'd go thrift shopping every weekend -- that creativity fused; together they'd come up with great ideas for various school projects (Ackerman at NYU, Olsen at Columbia) which organically morphed into Mandate Of Heaven; "We sewed on the weekends in our dorm-room all through school."

Heavily influenced by a stylish mom and a liberal dad, Carissa quickly made her mark. "I want to encourage people to feel comfortable in their visual exploration; a bizarre and archaic stigma still hangs over girls who express their sexuality and attractiveness too openly," she says. To that extent, she loves to incorporate lace and ribbons onto her thrift-store finds in order to recreate her feminine beauty ideal: a compromise between her mom and babes like Marilyn Monroe.

In addition to her Mandate Of Heaven line, which offers a wide range of cozy-sexy sweaters, skirts and dresses -- her best-selling items being the puffy tulle skirts and vintage teddies -- Carissa also designs Opiate, a not so casual line of terry cloth undergarments, hand painted with naive depictions (rainbows, talking bunnies, marital scenes, etc...) by her boyfriend Ariel.

Additionally, this adorable pair just started hosting friendly soirees in their boutique on the weekends. Their mandate is radically, heavenly cool.

"I can't believe I gave my panties to a geek," a befuddled Samantha Baker sighed in Sixteen Candles. If one quote could epitomize the nerdy, happy, Day-Glo world of artist/designer Blair Bauer, this statement, which appears on her BlairWear garments, certainly would do it.

Though recently branded a graffiti artist  because of a newfound airbrushing habit -- Blair found herself in the graffiti world quite accidentally. Around 2001, she became mesmerized with an air-brushed painting at a gallery and tried her hand at it. But, for the record, Blair doesn't do trains or late-night trashings; her contingency plan does not include an inch of testosterone. Instead, Blair has embraced her feminine side, honed her self-deprecating sense of humor and turned it into an artistic, multi-faceted career.

Recycling her emotions, adventures and family history, Blair has been customizing and twitching stuff since high-school, way before she discovered Day-Glo airbrushing. She was raised on Twinkies, family perms (yes, Blair and all female members of her family would get their hair permed together), baton twirls, tutus and repeated readings of "The Cat in the Hat," and Blair quickly developed a flair for fanfare. After designing tampon purses in high school (a very personal and somewhat successful undertaking), Blair transferred her verbal wits and fascination with Day-Glo to other artistic endeavors. There was a stint at FIT (where she had the revelation that she didn't belong), and some costume designing in the summers at the Weathervane Theater in Whitefield, New Hampshire, before she decided to move to New York and pursue a painting career.

Whatever happens to fall onto her petite lap is subject to some degree of transformation. At first, she started messing with old Salvation Army clothes, then moved to things like H&M Couture, Beacon's Closet finds, her own wardrobe, yours and mine, as well as whatever space she crosses or inhabits (save the cats).

With her cartoony drawings and snarky turns of phrases, Blair challenges the self-importance one often encounters in the fashion business. Words of wisdom that appear on her garments range from declarations such as "Dr Destiny can fix me with osmosis" to "I thought I was in love, I think it was the flu."

To date, Blair has designed T-shirts worn by models in Garnier Fructis ads (and hopefully got loads of free shampoo), lived for five years in her own fabulous "pink period installation" room in the historic Chelsea Hotel, had numerous gallery exhibitions of her canvassed Day-Glo paraphernalia -- squirrels, dolls, lipsticks, lollipops and other cute stuff -- and has been designing clothing under the name BlairWear since 2001 (Janet Jackson is a client!). Her latest enterprise is baby clothing, and she's seeing the adorable Day-Glo-painted sweats and tees fly off the Barney's racks where she sells exclusively.

Besides her numerous live performances (she's done CBGB's), where she airbrush-customizes clothes for her audience, she has plans to branch out with a Blairwear home line as well as gift items and accessories. "I'm a feminist," she says, and a girl needs to make her living. And that's probably why she's been known to airbrush: "Two horns are better than one." 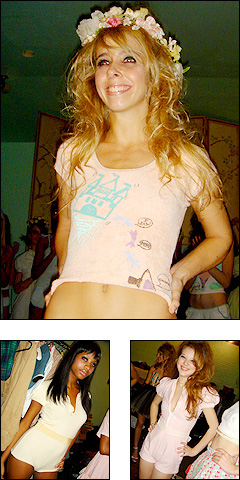 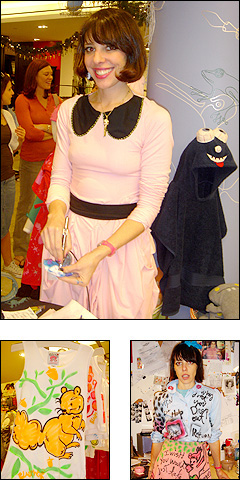