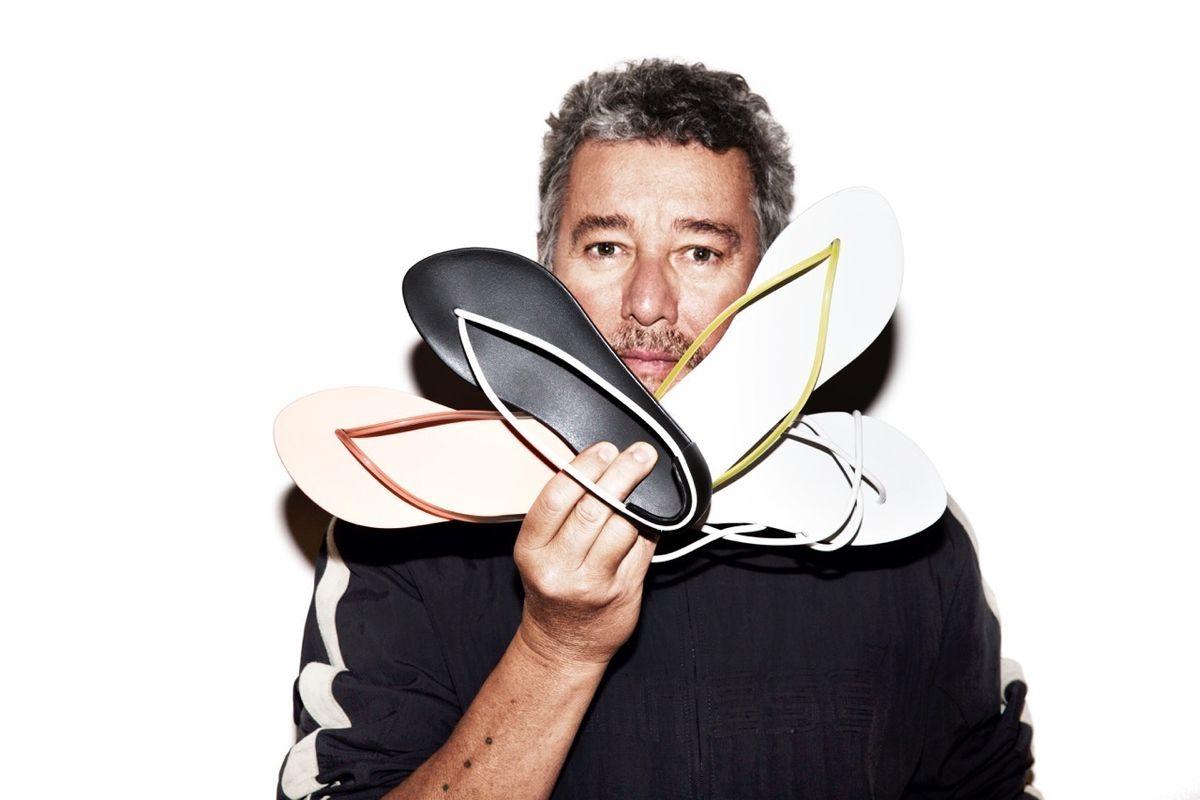 Philippe Starck is one of the world's fanciest designers. He's done some of the most famous hotels like the Royalton, Le Meurice and Mama Shelter. He also designed Steve Jobs' yacht. And now the man who brings a whole new meaning to 'workaholic' has launched the Ipanema with Starck collection of flip-flops that retail for $30-$40 reminding us that great design doesn't have to have a gigantic price tag. The shoes come in 4 designs and 12 colors for a total of 48 possible looks. The Ipanema by Starck collection is available now at Colette in Paris and 10 Corso Como in Milan. We had the chance to hear more about the new collection and Starck's nonstop workload.

Tell us about these Ipanema shoes you've designed.

First, it's a real need, not an accessory. Everyone needs shoes. Also, it's a very strong symbol. I remember my grandmother would always tell me "You can be poor but you always need to have clean, perfect shoes." I don't know why but it's true. And that's why, for me, shoes were very, very important. When I was traveling I realized two-thirds of the population wears sandals. The poor, plastic flip-flop kind. I think it's the number one shoe in the world by far, because Asia, Africa, India, South America, this wide strip of hot climate countries wear flip-flops.

I think it's really elegant, not because of the design but because it's the extreme, ultimate minimum of shoes. You cannot make it less. I say the only respectable fashion is freedom. Freedom to choose, freedom to be different, freedom to assume your difference, freedom to find something to make you unique. That is always difficult in mass production. That's why I made 48 different colors, and with the 48 you have to choose what fits you.

You're French but teamed up with a Brazilian company -- what is your relationship to Brazil?

Brazilian people are the most charming people in the world. They are so joyful you cannot be sad in Brazil. They love to sing, and dance, and party, which for somebody severe like me from Paris is very surprising. They are very nice people. It's difficult because when you party all the time you work less.

Are you a work-a-holic?

I am a little more than a work-a-holic. I'm at the highest level of addiction to work. With my wife, we travel everyday, but when we don't travel we are always alone. Our new fantasy is to wake up at 4:30 in the morning, to sleep thirty minutes at noon, and to work until seven or eight, where I bike 20 kilometers and then eat my soup. Because of this very strange life -- I don't say I make good things, but the work's quality is at the highest level because the creativity comes from the management of concentration. I am completely concentrated that's why I can produce alone. I can produce one project a day. Sometimes, it's a huge project! Huge! Huge! When we send my work to Paris they're astonished! They say "How can you do that to that level of detail?" That's why it's not quite being a work-a-holic because it's what I do. I know nothing else. We were shocked last month -- I finished my work at four o'clock. My project was done. And we have a beautiful house by the sea. There is a beach. There is a harbor. We never went out of the house for those two or three weeks. I said "I have finished, what we can do?" We had no idea. I said "I don't know anything else, I'll go back to work and start another project."

You know, my strategy of work -- I'm not a believer -- but my process of work and life is like religious. I have a goal, I try to help my friends have a better life, and I do it completely. I stop only when I say "I have done my job well" with honesty. It may not be perfect, it may not be good, but it's me. I give everything I can. Every minute. People are surprised how involved I am in the project. Something like that, they develop a regular schedule, it's between two weeks, three months, four years -- when you say four years, I think that's coo-coo. But you know, when we were working on [the yacht] Venus for Steve Jobs, it was designed in one hour and a half in my bed while my wife was sleeping in L.A arriving from Paris. I was not sleeping. I did it completely. I go very fast. Everything was designed. We presented directly to Steve. Everyone said it was beyond what they could ever imagine. Then we spent seven years on details of a quarter of a millimeter on a boat of one hundred meters.

Has there ever been a job that you've been brought that you said "no" to because it had already been done?