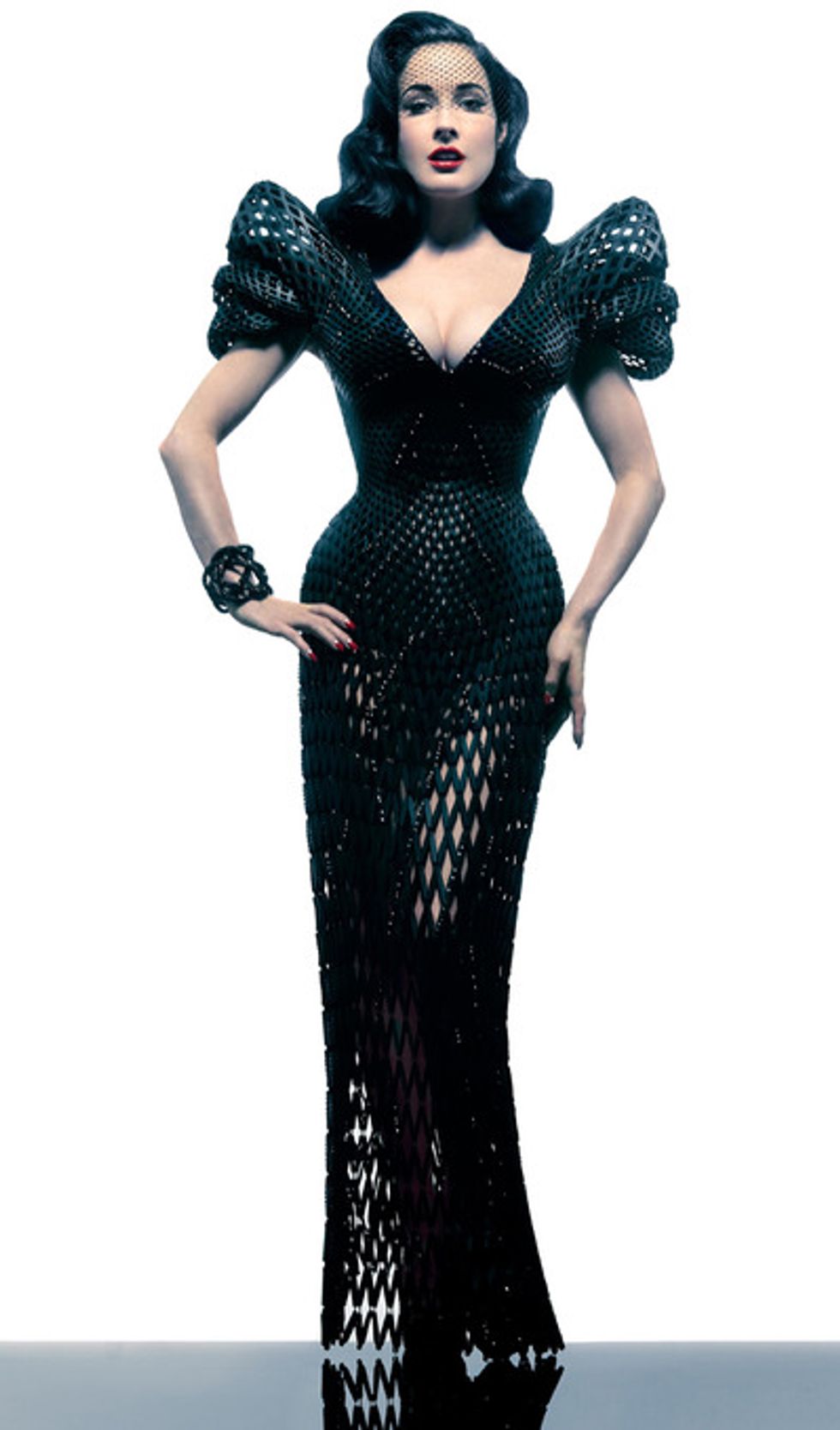 When we heard that the world's first totally articulated 3D-printed dress had been made, we were excited and a little scared. Would 3D printing take over the fashion world -- or the world at large? For that matter, what exactly is 3D printing and how do you use it to make a dress? We had so many questions that we went ahead and asked the designer of the dress, Michael Schmidt, about how all of this stuff works and what he thinks is in store for 3D printing.


What is 3D printing? How does the process work?
In a nutshell, a 3D printer is like any regular printer except that it prints not only in length and width but also in depth. Throughout history, most forms of manufacturing have been known as 'subtractive' in nature. This means that you start with a raw material, remove what you don't need and arrive at your final form. By contrast, 3-D printing is known as 'additive' technology. The printer lays down a fine layer of powdered material such as nylon and a laser solidifies the powder according to your design. Then another layer is deposited over the first and the laser hardens, or 'sinters' this layer, and subsequent layers are fused until the final form is built up. This process is called 'selective laser sintering.' The residual powder is vacuumed away, leaving a fully rendered item.

What different ways can you integrate 3D printing into designing an item of clothing?
This process allows for the creation of complex shapes and even "fabrics" that were previously unattainable through conventional means. Its very nature lends itself to pushing the boundaries of fashion. It may eventually become possible to input your measurements and have a printer create a garment specifically tailored to your body.

What's your personal process for designing a dress? And how did it differ from designing a 3D dress?
I'm not much of a sketch artist so I use a variety of means to communicate my ideas anyway. This piece was uniquely engaging in that a great deal of the making of the gown was not only out of my control, it was out of my scope of comprehension. That's why I partnered with Francis Bitonti, an architect based in NY, to help convert my design for the gown into the coded renderings required by the printers. I emailed him my raw sketches from Los Angeles, he created a virtual Dita in his computer and together we 'draped' the design over her form via Skype. He then sent the code to Shapeways, the 3D printing pioneers based in NY. They printed the mesh in 17 sections containing a total of nearly 3,000 fully articulated joints, which were then sent back to me to be colored, assembled and adorned with hand-applied Swarovski crystals.

What made you choose Dita Von Teese as your muse?
Dita embodies graceful athleticism, a knowing sensuality and an effortless chic, all of which serve to enliven the gown. She's no stranger to adventurous wardrobing and she's also a great friend. I wouldn't have thought to attempt this for anyone else.

Did anything else inspire the silhouette and design of the dress?
I wasn't interested in diverging from [Dita's personal style]. When designing for a personality I don't impose my own style upon them; I try to embellish theirs. The design of the gown is a nod toward Dita's flair for 1930's era Hollywood glamor -- achieved by utilizing this futuristic technology.

Did you have to alter your general sensibility to factor in the 3D technology?
Not really. I'm accustomed to taking unusual materials and adapting them to the body. That's been a fairly consistent challenge for me throughout my work.

What are the most interesting things going on in 3D printing right now?
Dutch designer Iris Van Herpen has been doing astonishing work with this technology for a few years, and she will no doubt continue to push the limits of what is possible. Other designers are realizing amazing feats of jewelry and even shoes are being printed.

Do you think fashion design will go totally 3D?
Definitely not. While a designer can create really original creations with this technology, there's no substitute for the hand of a skilled artisan when it comes to touching the soul of the wearer. But there's no reason the two can't be allies!